Roger Stone Made His Name as a Dirty Trickster, but the Trump-Russia Cover-Up May Finally Bring Him Down 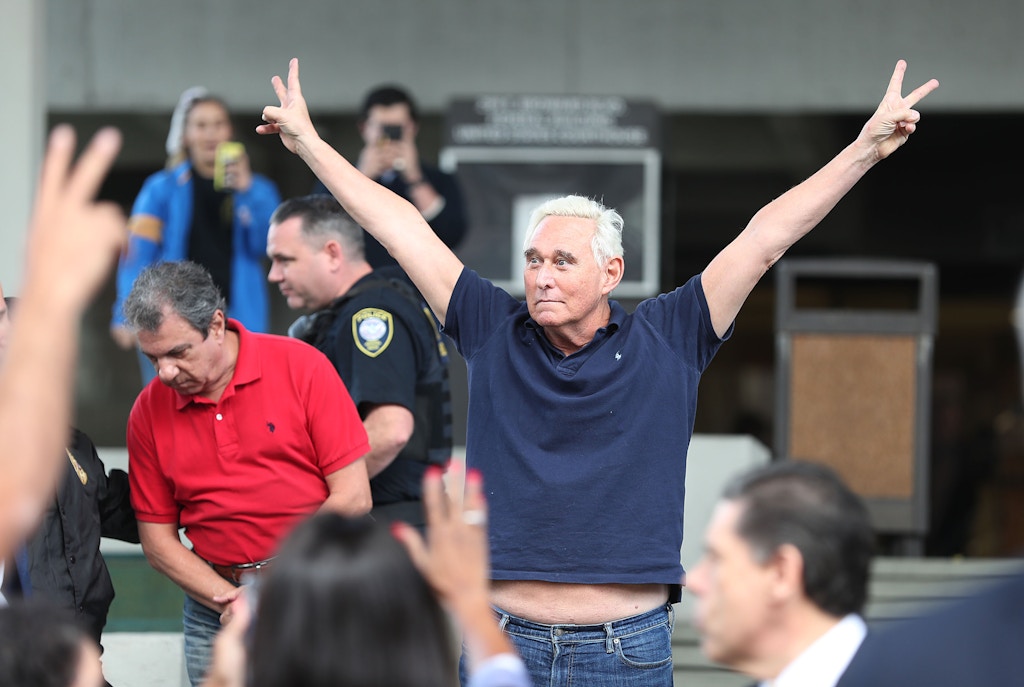 The government was shut down, but Robert Mueller kept working.

Stone, a longtime ally of Donald Trump, a frenetic character with a reputation as a Republican dirty trickster, and one of the most colorful figures in the Trump-Russia story, has finally been brought to heel. With this latest indictment, the special counsel is drawing ever closer to Trump’s inner circle.

The indictment sheds new light on the alleged efforts by Stone and others around Trump to glean information about the trove of Democratic emails obtained by WikiLeaks during the 2016 presidential campaign. It also raises new questions about whether Stone sought to influence and direct WikiLeaks releases that were damaging to the Clinton campaign.

Since his name first surfaced in connection with the Trump-Russia inquiry, Stone has behaved in public like a clown, reveling in his cheap celebrity while also taunting Mueller and the press. He acted in the same manner after his court appearance on Friday, meeting the crowd outside the Florida courthouse with both arms raised in a Nixon-like victory salute, while vowing not to testify falsely against Trump to save himself and predicting his ultimate vindication.

But the indictment shows that Stone has some serious legal problems, and that his role as a possible link between the Trump circle and the cyberassault on the Democratic Party and Hillary Clinton’s campaign can’t be laughed off or easily dismissed.

The indictment alleges that Stone engaged in a concerted effort to find out what documents WikiLeaks had obtained that could harm Clinton’s campaign, and what WikiLeaks (identified in the indictment only as “Organization 1”) was going to do with them. He was scrambling to find out in advance when the documents would be released and tried to get messages to WikiLeaks to look for specific documents in its trove that he thought would be most harmful to Clinton, according to the indictment.

The indictment says that in June and July 2016, Stone told Trump campaign officials that he had information that WikiLeaks had documents that would be damaging to the Clinton campaign. The indictment notes that Stone did so after the Democratic National Committee had already made public the fact that it had been hacked by the Russian government, strongly implying that Stone should have known that the material obtained by WikiLeaks had come from the Russians. (The U.S. intelligence community has now concluded that Russian intelligence hacked the Democrats and turned over a massive archive of emails to WikiLeaks, which later released them.)

The Trump campaign evidently began to realize that Stone knew what he was talking about when WikiLeaks released some documents on July 22, 2016. It was then, according to the indictment, that the Trump campaign began to try to use Stone’s apparent inside knowledge as a weapon.

Subsequently, Stone told Trump campaign officials about upcoming WikiLeaks releases, according to the indictment. Stone used intermediaries to communicate with WikiLeaks, including in his efforts to influence the release of specific information that he believed would be particularly damaging to the Clinton campaign.

In September 2016, Stone asked an intermediary to contact WikiLeaks founder Julian Assange (identified in the indictment as “the head of Organization 1”) to get him to find emails from August 2011 that would help prove specific allegations raised in the press against Clinton about her time as secretary of state, according to the indictment. The indictment says that on September 18, 2016, Stone sent an email to “Person 2” (widely identified in the press Friday as New York comedian Randy Credico), who Stone was then using as a go-between with Assange. The email included an article that contained allegations against Clinton related to her time as secretary of state in the Obama administration. The indictment does not say what those allegations were.  “Please ask [Assange] for any State or HRC email from August 10 to August 30 – particularly on August 20, 2011, that mention [the subject of the article] or confirm this narrative.”

If the indictment is borne out, Stone’s actions come very close to making him the key missing link in the Trump-Russia collusion narrative. He allegedly worked hard to acquire advance knowledge of WikiLeaks document releases and, at the Trump campaign’s request, gave that information to Trump campaign officials. He seemingly tried to direct WikiLeaks to release certain documents in order to increase the damage to Clinton. And he did it all at a time when he should have realized that the Russians were behind the Democratic hack.

Still, the indictment does not charge Stone with a crime for his efforts to act as an intermediary between the Trump campaign and WikiLeaks. Instead, he is charged in connection with his efforts to cover up his role in the face of congressional inquiries that began after the election, and more broadly, to block investigators from answering underlying questions about Russian intervention in the 2016 election. “After the 2016 U.S. presidential election, the U.S. House of Representatives Permanent Select Committee on Intelligence, the U.S. Senate Select Committee on Intelligence, and the Federal Bureau of Investigation opened or announced their respective investigations into Russian interference in the 2016 U.S. presidential election, which included investigating STONE’s claims of contact with [WikiLeaks],” the indictment states. “In response, STONE took steps to obstruct these investigations.”

The indictment shows that Stone used mob-like tactics to try to stop Credico from honestly telling Congress what he knew. In December 2017, Stone told Credico that he should be like “Frank Pentangeli” in his congressional testimony, the indictment says. Pentangeli is a fictional character in “The Godfather Part II,” who told Congress that he didn’t know information that he actually knew. In April 2018, Stone sent Credico an angry email. “You are a rat. A stoolie. You backstab your friends-run your mouth.”  Stone also threatened Credico’s dog. In May, Credico wrote an email back to Stone saying, “you’ve opened yourself up to perjury charges like an idiot.”

While the charges against Stone don’t deal with the underlying question of collusion between the Trump campaign and Russia, the Stone indictment still brings Mueller’s probe closer than ever to the heart of the matter.