The signature effort that has become attached to Alexandria Ocasio-Cortez, the Green New Deal, was originally planned to go by a different name, she said. 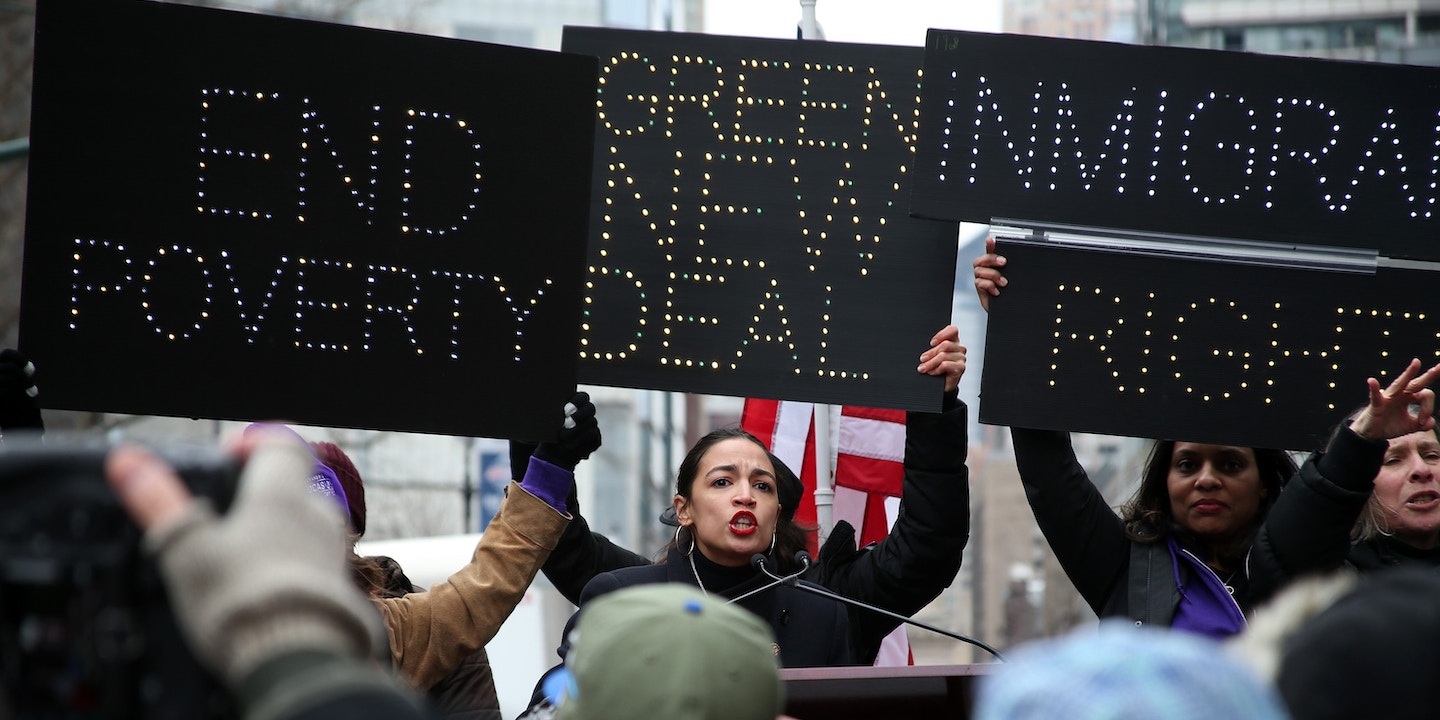 The signature effort that has become attached to Rep. Alexandria Ocasio-Cortez, D-N.Y., the “Green New Deal,” was originally intended to go by a different name, she told The Intercept in a recent podcast interview. But as social media and news outlets covering the platform began coalescing around the term, which had long been used by the Green Party, Ocasio-Cortez ceded to the public, she said.

With more than 2.6 million followers on Twitter and more than 2.1 million on Instagram, Ocasio-Cortez has a social media presence that surpasses any of her peers, including Democratic leadership, and her level of engagement on Twitter regularly rivals President Donald Trump. Key to that, she said, is using social media to gauge the public mood and respond accordingly.

Earlier this month, the 29-year-old democratic socialist held a crash course about Twitter for her Democratic colleagues in which she covered her approach “and how we can better get a party message to really resonate with people,” she said.

In addition to using social media to teach her followers about the inner workings of Congress and some of the more complex policy fights, Ocasio-Cortez said she also uses Twitter to listen and see what kind of messaging gains traction. “That’s probably one thing that I that I did not share in this Twitter 101, because maybe that’s more of a 201, in that it’s not just an outlet, it’s also an inlet, in that it is a place where you can — where you take temperature, where you take pulse, and it’s not just how to tweet but it’s also how to listen and how to read,” she said.

“And, and that really tells you where people are at, where the zeitgeist, so that you can kind of be speaking in a way that is not going against the tide of of the language and the mood in the sentiment of where people are.”

She cited the Green New Deal as an example of a time she used social media to gauge public reaction to the branding of a policy. Her campaign had been floating the idea of a Green New Deal before the general election, interviewing policy experts, academics, and activists about it. At the time, though, “Green New Deal” was only a working title and the campaign hadn’t yet settled on what they would call it or how they would talk about it to the public, “I wasn’t 1,000 percent sure on that kind of branding, if you will, or how we would talk about that.”

The term had long been floating around left-wing policy spaces. A Green New Deal has been part of the Green Party’s platform for more than a decade, and Jill Stein had been campaigning on it since 2012. Early use of the term traces back, oddly, to Thomas Friedman, who wrote a New York Times column in 2007 about the concept and later expanded the idea in a book. The following year, Barack Obama made a Green New Deal, or “Green Jobs,” part of his presidential platform, and brought Van Jones into his administration to try to implement a small a version of it. The concept didn’t fully take off until a new wave of progressive candidates campaigned on a more aggressive version of it — but its sudden surge into the mainstream happened after Sunrise, a youth-led environmental organization, held a sit-in in Nancy Pelosi’s office.

Ocasio-Cortez dropped by to cheer on the young activists, and in the ensuing weeks Sunrise pushed dozens of members of Congress to adopt a resolution calling for a new select House committee on climate change. Ultimately, Democratic leadership didn’t completely give in to the demand, as the panel will not have any of the major features progressives were asking for. The committee won’t have the authority to approve legislation or any subpoena power to compel testimony from oil industry executives or obtain documents.

“Green New Deal was a working title, and we almost had the understanding that was going to be called something else,” she said. “But it kept leaking, and catching, and people just started writing articles calling it a Green New Deal before we even said anything or called it that ourselves. And so because of that, that was in a moment where it was listening, and I was like OK let’s not try to force our own thing on this, if this is building traction, if it’s easily being communicated, then let’s just run with it.”