The Florida congressperson tried to expel a grieving father from a hearing on gun violence, and he has voiced racist ideas and conspiracy theories. 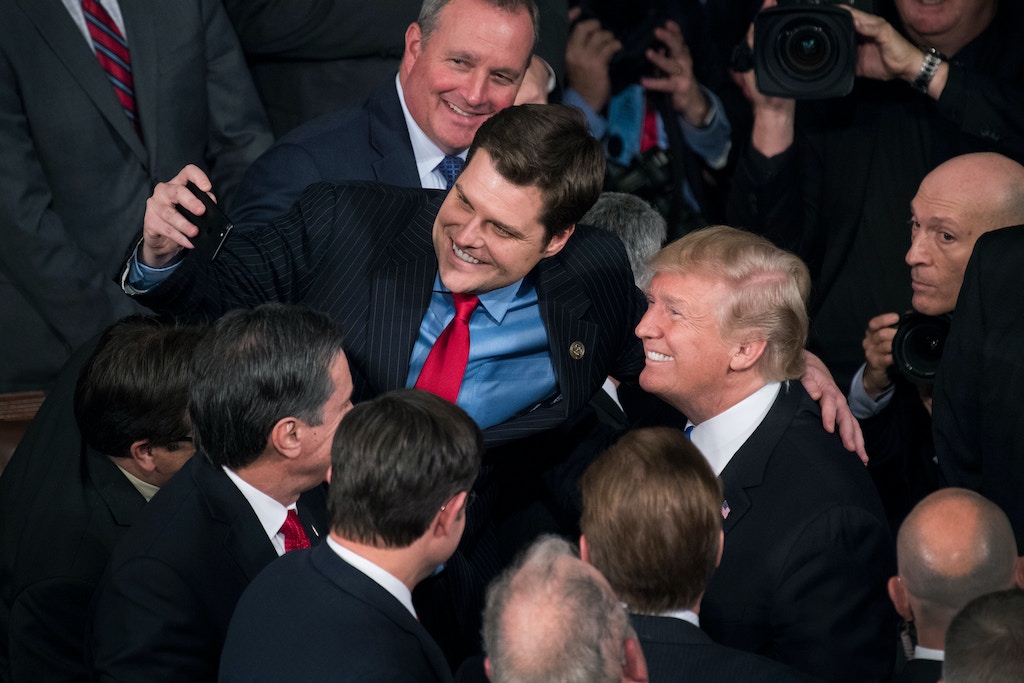 Rep. Matt Gaetz takes a selfie with President Donald Trump after Trump’s State of the Union address in Washington D.C., on Jan. 30, 2018.

Joaquin Oliver, nicknamed “Guac,” was only 17 years old when he was gunned down at Marjory Stoneman Douglas High School, in Parkland, Florida, on February 14, 2018, along with 16 other students and staff members.

On Wednesday morning, almost exactly a year later, his heartbroken father, Manuel, sat in the audience of a House Judiciary Committee hearing on gun violence — “the first of its kind in nearly eight years” — as Republican lawmaker and National Rifle Association lackey Matt Gaetz ludicrously argued that “the greatest driver of violence … was not the firearm, it’s the fact that we have an immigration system that allows people to come here violently.”

“That’s a lie,” Manuel Oliver shouted as he stood up. “That’s not true.” (For the record, Joaquin’s killer was a U.S.-born citizen.)

How did Gaetz respond to the interruption? He jabbed his finger at Oliver while loudly demanding that this grieving father of a teenager killed in one of the deadliest shootings in modern American history be kicked out from the hearing. And then he doubled down on his ridiculous and racist claim that “if we really cared about safer streets, we would build the wall and secure the border.”

Question: Is Matt Gaetz the most despicable and shameless member of the United States Congress?

The 36-year-old Gaetz, elected to the House of Representatives from Florida’s 1st Congressional District in 2016, is a favorite of Fox News and a rising GOP star. He represents, however, everything that is wrong with the modern Republican Party: from racism, anti-Semitism, and white nationalism; to conspiracism and anti-intellectualism; to a slavish and sycophantic loyalty to Donald Trump.

Racism? Where to begin? In 2013, in the wake of the acquittal of Trayvon Martin’s killer, George Zimmerman, Gaetz offered a “full-throated defense” of Florida’s “stand-your-ground law,” which multiple studies have found to be racially biased. In 2015, Gaetz, then a firebrand member of the Florida House of Representatives, suggested two black members of the state’s Senate did not know how to write or spell. In 2016, he lambasted “illegal immigrants,” who he said were “sucking us dry.” In 2018, he tried to justify Trump’s description of Haiti as a “shithole” by referring to the “deplorable” and “disgusting” conditions in that country.

It is worth noting that Steve King of Iowa is far from the only Republican member of Congress to offer cover to white nationalists. In January 2018, Gaetz invited notorious far-right internet troll Chuck Johnson to be his guest at Trump’s first State of the Union. Johnson was banned from Twitter for wanting to “take out” Black Lives Matter activist DeRay Mckesson and once said he never “believed the 6 million figure” for the Holocaust. Gaetz, however, defended Johnson on — where else? — Fox Business: “He’s not a Holocaust denier; he’s not a white supremacist. Those are unfortunate characterizations of him.”

The loathsome Gaetz is also a fan of conspiracy theories. He has appeared on 9/11 truther Alex Jones’s Infowars show, on which he was described as “one of the strongest, most focused, eloquent, on-target voices” defending Trump. In March 2017, then-Attorney General Jeff Sessions recused himself from the Russia investigation into the 2016 presidential election. Gaetz’s response? Sessions, he claimed in May 2018, “has become sympathetic with his captors over there in the deep state.” In July 2018, his fellow Republican congressperson Jim Jordan was accused by eight former students of turning a blind eye to sexual abuse while working as a wrestling coach at Ohio State University. Gaetz’s response? “The deep state,” he told Fox Business host Lou Dobbs, is “out to get Jim Jordan.” In October 2018, a caravan of migrants set out from Central America and headed for the U.S.-Mexico border. Gaetz’s response? George Soros, he suggested in a tweet, might be “giving cash 2 women & children 2 join the caravan & storm the US border.”

Trump later retweeted the Florida congressperson. The president of the United States is a big admirer of Gaetz — and the feeling is more than mutual. The latter’s Twitter bio contains this quote from Trump about him: “He’s a machine…handsome and going places.” In November 2017, Gaetz introduced a resolution in the House of Representatives calling for Robert Mueller to be removed as special counsel. Is it any wonder that Politico called him the president’s “best buddy in Congress,” one of his “most enthusiastic defenders … on cable news,” and a “proud Trump protege.”

I would go further: Gaetz is Trump’s “mini-me” in Congress. As with the president, though, it is difficult to work out whether Gaetz is dishonest or … demented. What is indisputable is that his behavior in Congress on Wednesday was a very Trumpian mixture of cowardice and callousness, of needless cruelty and brazen bigotry.

Listen to Fred Guttenberg, whose 14-year-old daughter, Jaime, was also killed in the Parkland shooting, and who was sitting next to Manuel Oliver at the House Judiciary Committee hearing. An angry Gaetz tried to have both Oliver and Guttenberg ejected from the room.

“I found what he did — to treat what happened to our families that way — it’s disgusting, despicable and vile,” Guttenberg said. “But I’m actually thrilled Mr. Gaetz acted like Mr. Gaetz. I think it was wonderful for the American people to see who he is as a person.”