At a conference in Washington, labor leaders said their losses following the Supreme Court’s decision in Janus were not as severe as they had feared. The last year has been a whirlwind for the labor movement. There have been unexpectedly positive developments, like the forceful rise in teacher activism across the country, and negative ones, like the U.S. Supreme Court decision in Janus v. AFSCME, which found that unions could no longer collect agency fees for bargaining from workers who do not pay membership dues. The labor movement had been grinding its teeth over that possibility for several years, bracing for its already strained coffers to further deplete.

But last weekend, when labor leaders and activists gathered at a two-day conference in Washington, D.C., to discuss their movement, the mood was overwhelmingly jubilant. With Democrats now controlling the House of Representatives, the immediate financial pain of Janus less severe than expected, and public opinion for unions standing at a 15-year high (Gallup reported recently that 62 percent of Americans approve of unions), movement activists seemed far more energized than one might have expected them to be one year ago. It almost felt like a pep rally.

Speaker after speaker at the Future of American Labor conference spoke confidently and animatedly about the progress unions have made in the United States, organizing strikes and winning some protections for contract workers — gains they expect to continue even in the wake of Janus.

“For every member that we lost, we gained seven.”

Labor leaders said the losses from Janus were not as severe as they had feared, citing their proactive organizing efforts as primary reasons. The American Federation of State, County and Municipal Employees, for example, lost 100,000 agency-fee payers since Janus, Lee Saunders, president of the union, said at the conference. Yet they also managed to flip 310,000 agency-fee payers into dues-paying members through new organizing. “For every member that we lost, we gained seven,” Saunders said.

Randi Weingarten, president of the American Federation of Teachers, reported similar gains. The AFT lost 84,500 agency-fee payers after Janus, but between November 2017 and November 2018, Weingarten said the union’s membership numbers actually went up by 88,000. (Some experts anticipate unions will eventually feel the financial hit from Janus, especially if the well-funded “opt-out” movement, which targets public-sector workers to disaffiliate with their union, gains traction.)

Weingarten said the Supreme Court’s ruling gave unions an opportunity to reflect on what their membership means. “The real challenge becomes six months, eight months, a year after Janus — what is the value of belonging?” she said. “What’s the community you are creating? And what are the values that people connect with — not just what’s the transaction — but what are the values? That’s what we’re learning.”

Much of the conference focused on the national teacher insurgency, which continues this week as Denver Public Schools teachers go on their first strike since 1994. Last month, teachers in Los Angeles went on strike for six days, and thousands of Virginia public school teachers also stormed the state capitol in January for a one-day demonstration of power. Oakland teachers may be next to strike. 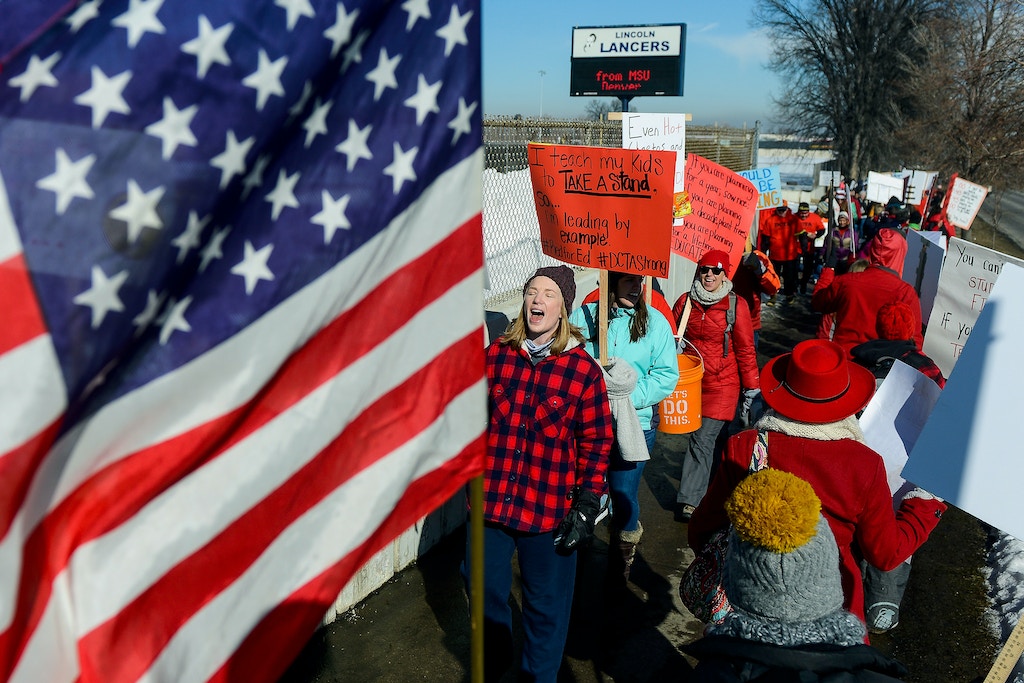 The strike in Denver, which started on Monday, is seeing comparatively low levels of participation. It comes after drawn-out negotiations between teachers and the district, and it has been mired in some controversy, including about giving financial incentives to educators who work in the district’s highest-poverty schools. The union calls these “failed incentives” and prefers to raise the base pay for all teachers in the district instead. This school district, which has already offered to raise base pay for all teachers from $43,255 to $45,500, wants to keep the incentives in place to attract and retain teachers in those more challenging schools and demonstrate a commitment to equity. The teachers want the starting pay to be $45,800.

In an interview, Becky Pringle, vice president of the National Education Association, the nation’s largest public-sector union, said she agreed that schools in high-poverty districts should get more support, but that it shouldn’t happen at the expense of other schools.

“Those schools absolutely should get more investment,” Pringle said. “But here’s what we’ve been forced to choose: The [district] say[s], Here’s the pie and those teachers [in high-poverty schools] should get the incentives. No, no, no. You need to redefine the pie, and that’s the false choice. Since the recession, we’ve been dealing with a smaller pie, but we’re not going to accept that narrative, that premise. A progressive agenda doesn’t start from their premise.”

Pringle did not say whether the teachers themselves should be paid more to work in those schools. “We know the equity means you give kids what they need,” she said. “So of course the kids who are coming to our schools that have suffered trauma or who don’t have food to eat have to have more, they have greater needs. Of course they do. But let’s stop having that conversation about taking [from one school] and giving to [another]. The state has the money to do what they need. The federal government has the money. So we’ve got to turn that [conversation] on its head.”

Despite the labor activists’ positive energy, the conference was short on commitments regarding what the movement would push for next and where things are headed.

“Right now there is an adrenaline high. … It took two years to get to the point where people were ready to strike,” said Mary Best, president of AFT-Oklahoma. (Oklahoma teachers went on strike in April 2018.) “We kind of have to see where the membership takes us [next].”

“We’re open to continuous learning, we don’t have all the answers,” said Pringle. “I love saying we have 3 million members, but we never have really realized the power of a 3-million member organization because we haven’t figured out how to leverage that collectively in a real way.”

Two panel sessions were dedicated to the prospect of “sectoral bargaining,” in which workers across entire industries, such as all finance workers or all retail workers, bargain together. Establishing sectoral labor standards has been an important strategy for workers in countries like France, Germany, and Brazil. The United States has laws that make it harder to establish multi-employer bargaining than elsewhere across the world, yet panelists were excited about the possibility of pushing for similar measures in this country.

Harold Meyerson, executive editor of the American Prospect and a panel moderator, asked union leaders how they plan to capitalize on the cross-union solidarity forged from mobilizing around and after Janus. Would the unions consider making a joint list of policy demands for 2020 candidates, for example?

“I think we’ll definitely do that,” Saunders answered.

“2020 is not the end in and of itself,” added Weingarten. “The work that we’re trying to do is to create coalitions for a better life.”

Whether cross-sector union solidarity actually continues in the years to come is an open question, but SEIU President Mary Kay Henry pointed to the “solidarity strikes” her members took in Los Angeles last month to support the teachers walking in the streets. “That was a huge act of courage for a worker earning $23,000 a year,” she said. (Firefighters also marched along with the striking teachers.)

“The work that we’re trying to do is to create coalitions for a better life.”

Union leaders noted the high support for unions among millennials, but they paid less attention to the issue of independent contractors and the rise of the so-called gig economy, in which many millennials participate. In a small press briefing, The Intercept asked what union leaders are doing to help organize labor-supportive workers in nontraditional workplaces. Henry pointed to the 2018 California Supreme Court decision in Dynamex Operations West, Inc. v. Superior Court of Los Angeles that made it harder for companies to misclassify workers as independent contractors as an example of progress on that front.

“We have a history of organizing contract workers. And I think what is going to be hugely impactful is what the entire labor movement has been doing in California with the governor and state legislature in responding to the Dynamex court case and inside the SEIU,” she said. ”We have a national advisory committee to our leaders in California because we’re organizing contract workers all over the country and are listening to what the key demands are.”

She also said her union is “trying to seize opportunities to support workers, while being careful not to undermine global standards.” The European trade movement, she explained, is currently making strides organizing around labor conditions for platform and contract workers, and Henry implied that the U.S. labor movement is interested in following the EU’s lead.

Weingarten agreed. “It’s often a legal fiction between independent contractors and employees, and we worked with freelancers on the New York wage theft bill,” she said, referring to a 2016 law that penalizes employers who delay payments to freelance workers. The AFT is working with adjunct professors and school substitutes, too, Weingarten added. “We’re working in coalitions, but I would say we do not have a holistic view yet about how to actually deal with [contractors] who need the protection of unionization and collective action.”

Saunders said his union is generally eyeing other areas in public service that could potentially be organized, like emergency medical services in the nonprofit sector. He also pointed to Nevada, a state that is likely to pass a new law this year granting collective bargaining rights to state workers. “We are primed to organize 20,000 new members because of that,” he said.