Abrams’s most notable lies came during an exchange about his actions as assistant secretary of state in the 1980s during the Reagan administration. 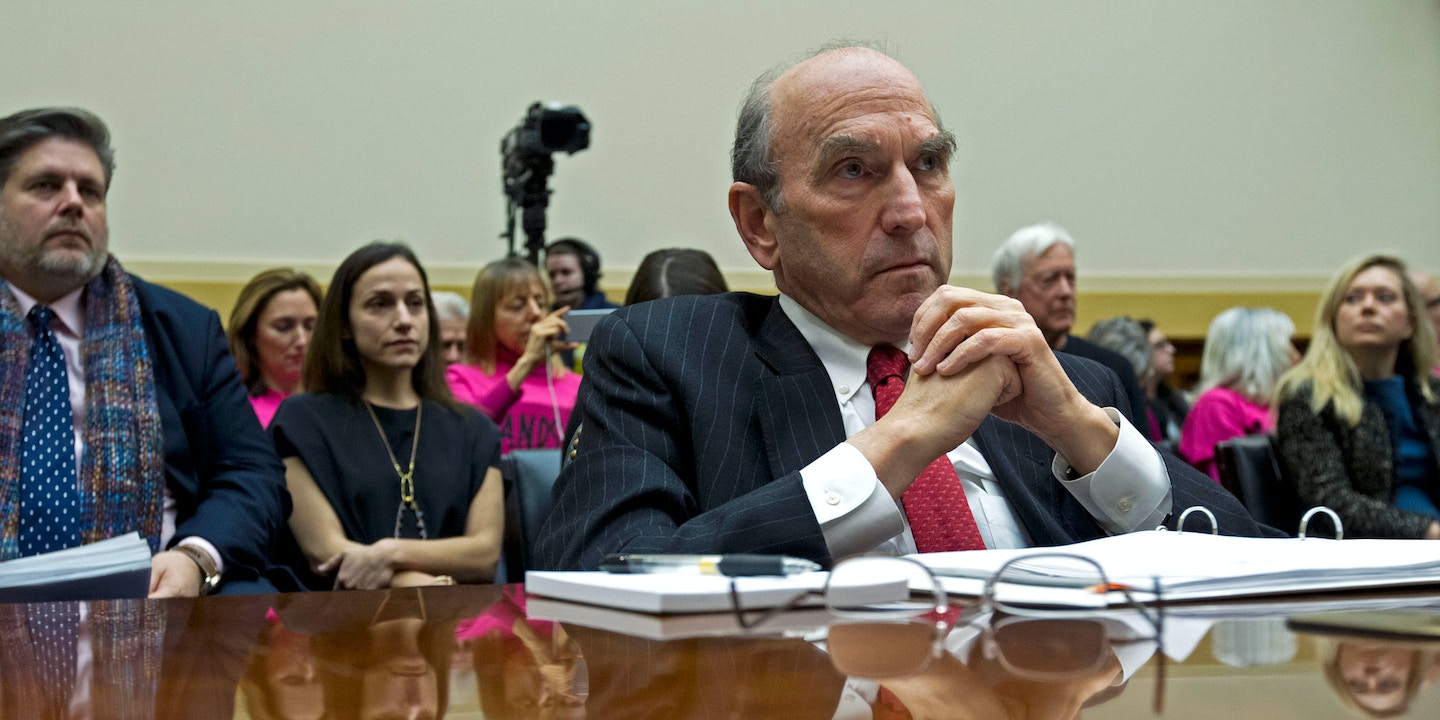 About two hours into the hearing, committee member Rep. Ilhan Omar, D-Minn., noted that Abrams pleaded guilty in 1991 to withholding information about the Iran-Contra affair from Congress. “I fail to understand,” Omar said, “why members of this committee or the American people should find any testimony that you give today to be truthful.”

Abrams’s most notable lies occurred during this exchange about his actions as assistant secretary of state in the 1980s during the Reagan administration:

OMAR: On February 8, 1982, you testified before the Senate Foreign Relations Committee about U.S. policy in El Salvador. In that hearing, you dismissed as communist propaganda reports about the massacre at El Mozote in which more than 800 civilians, including children as young as 2 years old, were brutally murdered by U.S.-trained troops. During that massacre, some of those troops bragged about raping a 12-year-old girl, girls, before they killed them. You later said that the U.S. policy in El Salvador was a “fabulous achievement.” Yes or no, do you still think so?

ABRAMS: From the day that President Duarte was elected in a free election, to this day, El Salvador has been a democracy. That’s a fabulous achievement.

Abrams’s words were “not only factually, demonstrably untrue, but grossly so,” according to Alejandro Velasco, a professor of modern Latin American history at New York University. His testimony, said Velasco, “continues a pattern he has shown since the 1980s of hubristically rejecting out of hand any suggestion that defeating social justice struggles in the 1980s, through the most brutal means, should in any way be seen as anything other than a resounding victory for the U.S.”

To start: When José Napoleón Duarte was elected president of El Salvador in 1984, it was not “a free election.”

Duarte was one of many Salvadoran politicians who spent time on the CIA’s payroll. In March 1980, he joined a junta that had recently seized power, and by the end of the year had become the junta’s head. He stayed there for the next year and a half — a period of stunning, gaudy brutality by the Salvadoran military against the country’s population. Tens of thousands were slaughtered with U.S support, including those killed during the El Mozote massacre described by Omar.

Pratap Chitnis, a member of the U.K. House of Lords, traveled to El Salvador to witness the 1984 election on behalf of the British Parliamentary Human Rights Group. “Crucial to the whole standing of the exercise,” he reported, “was the fact that no politicians to the left of [Duarte’s] Christian Democrats” could participate. Why? Because, said official British observers, “had these representatives campaigned openly, they would have run a very high risk of being assassinated” by right-wing death squads.

This was something like a U.S. presidential election in which the furthest-left candidate was Ted Cruz. Duarte’s only real competition was Roberto D’Aubuisson, founder of the ultraright wing ARENA party, who several years before had ordered the assassination of Óscar Romero, the beloved archbishop of San Salvador.

Many Salvadorans he encountered, Chitnis wrote, “laughed at the significance of the elections” given “the atmosphere of terror and despair, of macabre rumour and grisly reality.”

However, the Reagan administration realized that D’Aubuisson would be a PR disaster. So after enabling the elimination of El Salvador’s left, they intervened with massive covert support for Duarte, the “moderate.”

Thomas Carothers, a colleague of Abrams at the State Department, later wrote a book titled “In the Name of Democracy: U.S. Policy Toward Latin America in the Reagan Years.” Carothers was sympathetic to Abrams’s perspective and in fact, interviewed him for the book. Carothers states that “the administration approached the elections with two goals: ensuring that technically credible elections were held and that the Christian Democratic candidate, José Napoleón Duarte, won.”

To that end, Carothers said, the CIA provided “a significant amount of funds, possibly between $1 million and $3 million, for Duarte’s campaign.” In addition, the U.S. Agency for International Development overtly provided significant funds to help him. Jesse Helms, then North Carolina’s far-right senator and a supporter of D’Aubuisson, complained bitterly that the CIA bought the election for Duarte, whom he described as “a socialist.”

“An election was held within a very limited range of the political spectrum; choices were given but very few,” Chitnis wrote. “I asked relatives of the disappeared and brutally murdered, ‘Do you think things will be better now that President Duarte has been elected?’ ‘It was under President Duarte that these things happened in the first place’, they replied.”

Thus, Abrams obviously knows that this was no “free election.” As in the past, he was consciously attempting to deceive Congress.

Needless to say, it also is not the case that “El Salvador has been a democracy” since 1984. Control of the country remained in the hands of the military, with Duarte a largely powerless figurehead. The cruel war of the government against Salvadorans ground on for years. In 1986, the archbishop of El Salvador condemned indiscriminate bombing of civilians by the air force, and the establishment of free fire zones in which any inhabitants were deemed to be guerrillas and hence worthy targets.

When Duarte’s term was ending in 1989, the FMLN guerrilla group proposed a peace plan under which they would participate in the elections for a new president. Duarte rejected it, setting up a second election in which his party would be the left-most boundary of the possible. This time, however, ARENA “won.” According to the center-right Economist magazine, the “army frightened the voters, [ARENA] fixed the results, and its electoral commission delayed announcing them” until the vote tallies could be adjusted.

ARENA celebrated its democratic triumph with the notorious murder of six Jesuit priests and their housekeeper at Central American University in San Salvador. When Congress sent a delegation to investigate what was going on in El Salvador, they found that 14 of the top 15 highest-ranking Salvadoran military officers had ties to death squads.

By the time the next two elections came in 1994 and 1999, Abrams was out of office. Perhaps coincidentally, both were largely legitimate, at least formally. By 2004, Abrams was back in government in the George W. Bush administration, and the U.S. again attempted to intervene to pick the election’s winner. In 2009, with Abrams out of power once again, the FMLN won a presidential election for the first time.

The Economist now characterizes the Salvadoran political system as a “hybrid regime,” meaning that “elections have substantial irregularities that often prevent them from being both free and fair.” They have not permitted any genuine change that would allow the deep wounds of Salvadoran society to heal.

El Salvador now has by far the highest murder rate in the world — 15 times that of the U.S. and about 50 percent higher than Venezuela, itself notoriously violent. It is beset by “pervasive criminal gangs.” At $8,900, its per capita GDP ranks 146th in the world. According to the CIA Factbook, at least 20 percent of its population lives abroad, compared to 10 percent of Venezuelans — a situation which is rightfully seen as a crisis.

So Abrams is just as willing now as he was 30 years ago to mislead Congress. But what’s most ominous is that — given that he sees El Salvador as a “fabulous achievement” — he presumably would see a similar outcome for Venezuela as a fabulous achievement as well.

“No one who even marginally believes in democracy, human rights, and the self-determination of peoples can count Abrams as an ally, as his actual record amply demonstrates,” said Velasco. “Anyone who does so is either willfully ignorant or worse, complicit in the very crimes they say they are trying to combat in Venezuela.”