The Special Interests Behind Rep. Pramila Jayapal’s Medicare for All Bill Are Not the Usual Suspects

“If we are able to get out that we can have health care for all … there isn’t a human who won’t want it.” 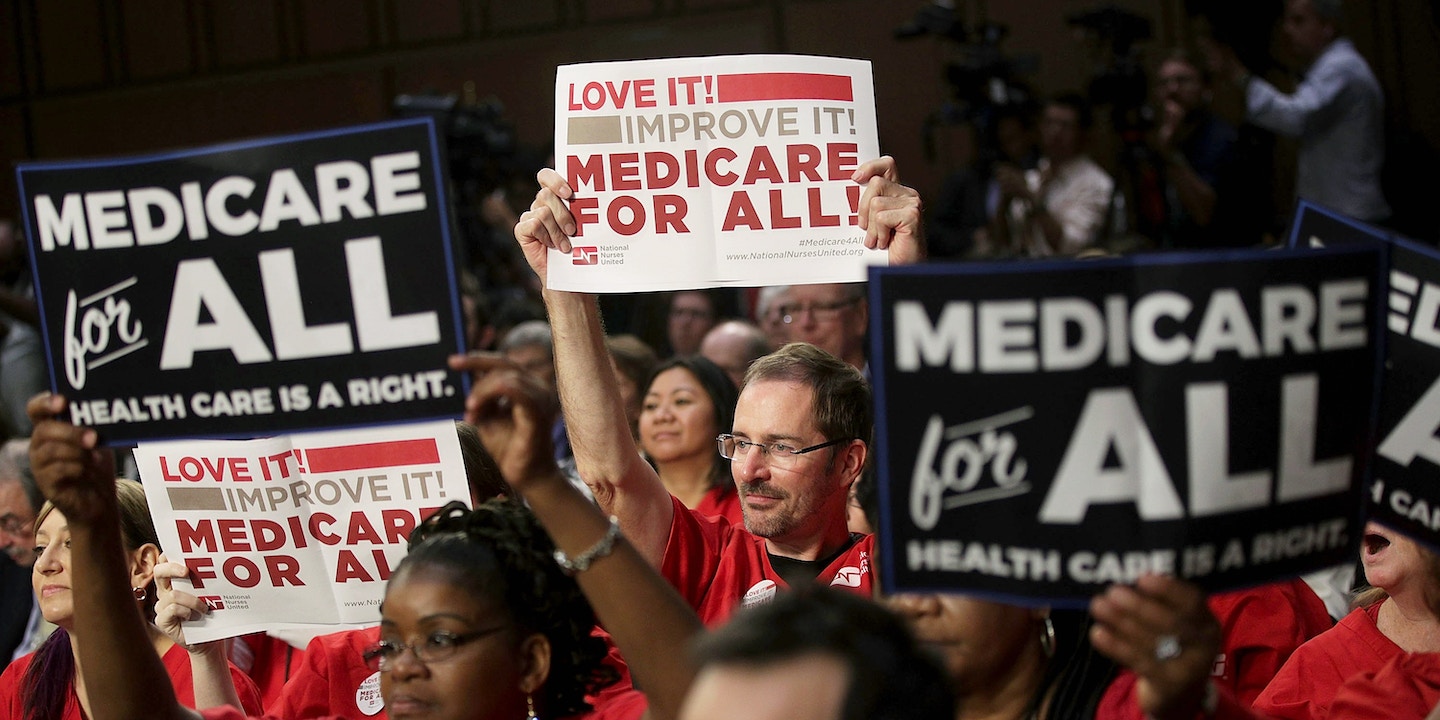 The Medicare for All legislation unveiled Wednesday by Rep. Pramila Jayapal, a Democrat from Washington state, was written with the help of a broad swath of lobbyists and special interest groups, if perhaps not the kind associated with typical health policy legislation on Capitol Hill.

The key outside groups involved in the drafting included nurses, doctors, disability rights activists, and advocates for the elderly, as well as public interest organizations such as Public Citizen and the Center for Popular Democracy.

The result is legislation that, within one year of its passage, would provide improved Medicare coverage for everyone 19 and under, as well as everyone 55 and over. Within two years, it would cover everyone between the ages of 19 and 55, as well.

The legislation, which is being introduced with more than 100 co-sponsors, is the most far-reaching since a Senate version sponsored by Sen. Bernie Sanders, I-Vt., and includes benefits that are more generous. It also moves to full implementation in two years — as compared to four years under Sanders’s plan — a recognition by Democrats that the opposition party will push to repeal it if they come into power, but doing so will be more difficult once the benefits have gone into effect.

The effort includes related legislation that would change the way long-term care is covered. Under the current system, Medicaid is the last resort, which effectively means that the sick and dying must impoverish themselves in order to qualify. The new bill would end that practice and allow people to die with dignity at home.

“We are included. Not just as a sidebar or footnote.”

That measure was written with the help of disability rights activists, led by the Consortium for Citizens with Disabilities. “She wrote it with our community holding the pen. Over months, disability rights activists went back and forth on the language. We are included. Not just as a sidebar or footnote,” said Ady Barkan, an activist dying of ALS, who collaborated with the Consortium for Citizens with Disabilities and others on the bill.

“It will allow me to live at home for the rest of my life. With my wife. And my son. My friends. My family. Surrounded by the things and people I love. That make me whole and settled. That connect me to humanity. That give me dignity,” Barkan wrote on Twitter. He has mostly lost the ability to speak and to type with his hands, but can communicate on social media using a program that tracks his eye movements to type. “My living at home will make life easier for my family. My wife won’t have to choose between spending time with me or spending time with our son. She won’t have to drive hours to my facility to see me. She won’t have to worry about how I’m treated when she leaves.”

The new law, among its swath of new benefits, would provide dental coverage, a major boost to the health and quality of life of millions who suffer constant toothaches, or worse, for lack of access to dental care.

Along with Consortium for Citizens with Disabilities, the main groups involved in drafting the legislation were National Nurses United, a major nurses union that has long been on the forefront of the fight for single payer; Physicians for a National Health Program; the Center for Popular Democracy, where Barkan works and which organizes poor and marginalized communities; Public Citizen; and Social Security Works, which represents more than a million progressive seniors who support expanding the Medicare coverage they have to the rest of the population.

Meanwhile, the insurance and pharmaceutical industries played little to no role in the drafting process — an anomaly on Capitol Hill. Their marginalization in the process represents a major departure from the approach taken with the Affordable Care Act and reflects the type of bill being drafted: one less concerned about the profits, or even survival, of interest groups like insurers and more concerned with delivering care to the largest amount of people in the most cost-effective way.

Noticeably absent from the central drafting room was the Center for American Progress, the leading center-left think tank, which reflects a reticence by many in the progressive policy community to embrace something as sweeping as Medicare for All. The Center for American Progress, instead, has pushed what it calls “Medicare Extra for All,“ an expanded version of a public option that people could buy into. “The American people and Congress are further out ahead and more visionary than a lot of advocates,” said Jennifer Flynn, director of mobilization and advocacy for the Center for Popular Democracy, who was closely involved in the drafting of the Jayapal legislation.

The liberal think tank’s reticence in the new health care conversation comes with a historical irony, in that the bill itself might not exist if not for the Center for American Progress. In March 2008, the think tank hosted a presidential candidate forum on health care in Las Vegas, at which Hillary Clinton, Barack Obama, and John Edwards all appeared. Edwards, then running on his theme of “two Americas,” stole the show with a sophisticated plan, the centerpiece of which was a public insurance option that would be similar to Medicare and would compete with private plans. Obama left the forum embarrassed, having shown up empty-handed, and instructed his staff to put together a robust plan. Obama’s health care plan eventually, if reluctantly, included a public option for health insurance, though it was traded away during negotiations with industry stakeholders.

It was the battle over the public option — and Sanders’s 2016 campaign for president — that reinvigorated Democratic interest in public health care as the solution to the crisis. Once it became clear that Republicans were determined to repeal the compromise version of health care reform that Democrats had implemented, the focus shifted to Medicare for All. If Republicans were going to call the Affordable Care Act socialized medicine, progressive Democrats reasoned, they might as well go for the real thing.

In the fall of 2008, before Obama was elected president, Sen. Ted Kennedy, D-Mass., convened a large group of stakeholders to find consensus on a path forward for reform. Dubbed the “Workhorse Group,” the gang included some activists, such as Ron Pollack of Families USA; representatives of labor groups like the Service Employees International Union; as well as every major industry group: Big Insurance, Big Pharma, for-profit hospitals, and medical device-makers.

John McDonough, Kennedy’s top health policy staffer, led the meeting in the Dirksen Senate Office Building and laid out three avenues that Congress could go down if and when Democrats took control in January.

“We aren’t trying to cram things into a system that has never worked. We are creating a functional health care industry.”

The first was called Constitution Avenue, a full break with employee-based coverage, either to single payer or to a kludgy and since-discarded scheme cooked up by Sens. Ron Wyden and Bob Bennett. The second was Independence Avenue, a small-ball approach that involved state-based high-risk pools and other fiddling at the edges. Then came Massachusetts Avenue, which would take the model developed by the conservative Heritage Foundation and implemented by Republican Gov. Mitt Romney in Massachusetts, and take it national. The result was the Affordable Care Act.

The consensus among those who mattered — the people in that room — was that single payer wasn’t viable, and that’s been the attitude of the majority of lawmakers toward universal coverage since then. Wednesday’s press conference and unveiling — coming with the co-sponsorship of nearly half of the Democratic caucus — is a signal that the consensus has been broken. Whether a new one emerges remains to be seen.

Flynn said the authors of the new bill learned from and built on what came before it. Obama “tried to cram too many health care delivery systems into his proposal. We learned from those lessons. I honestly believe that Medicare for All is the smartest, simplest way to get health care for all. It’s more strategic. We are giving people the health care that they want. We aren’t trying to cram things into a system that has never worked. We are creating a functional health care industry,” she said. “Jayapal’s is also a very thought-out policy proposal, written by women and mostly women of color. It’s certainly smart strategy to stake out the policy you want before compromising.”

The goal for advocates is to convince a skeptical public that quality health care for all can become a reality. If it’s seen as a real option on the table, Flynn said, it will be unstoppable. “Look, if we are able to get out that we can have health care for all — and all means all. And it’s free. No copays, no out-of-pocket deductibles, no bills — there isn’t a human who won’t want it,” Flynn said. “But we have an uphill battle to convince people that’s a real thing.”

Ryan Grim is the author of the forthcoming book “We’ve Got People: The End of Big Money and the Rise of a Movement.” Sign up here to get an email when it’s released.