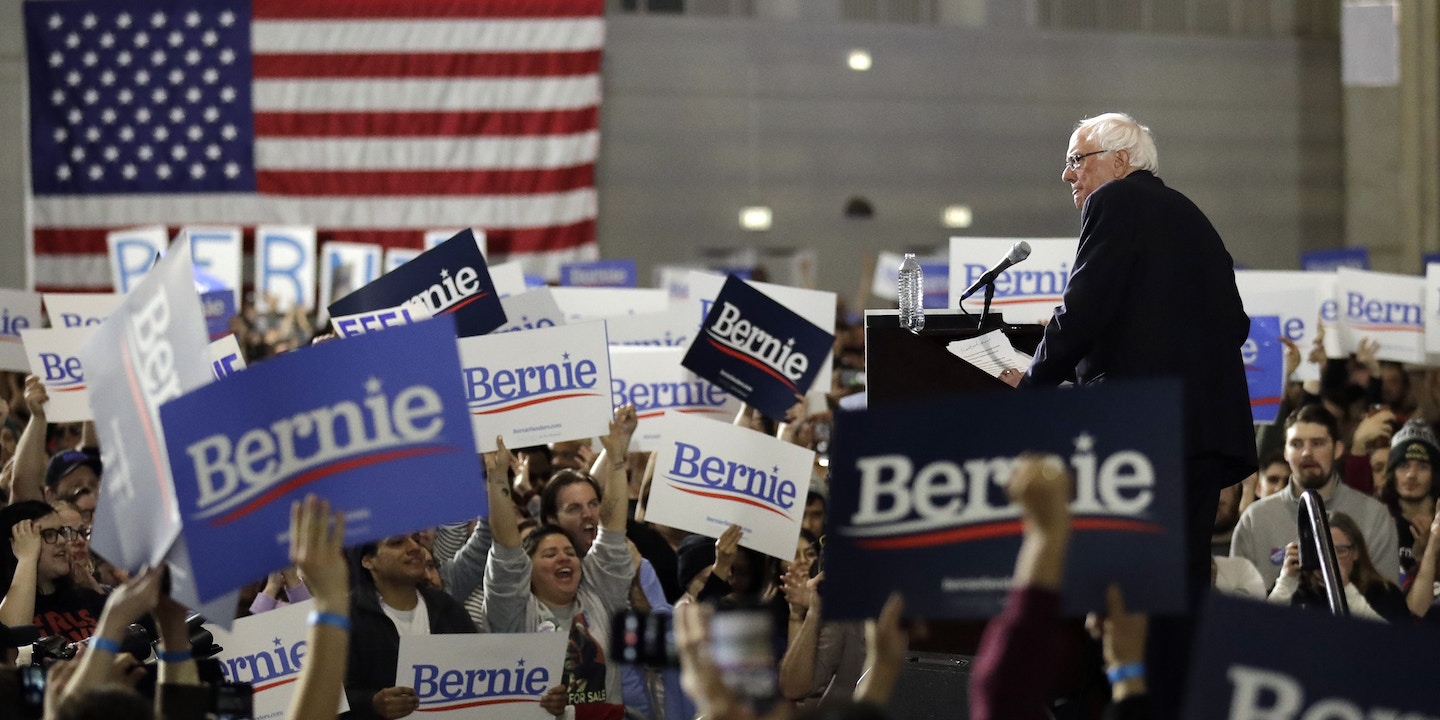 Three weeks after launching his presidential campaign, Vermont Sen. Bernie Sanders is leading all other announced candidates in support from black voters, a new poll finds. The only potential candidate who polled better with African-Americans than Sanders, according to the poll by Morning Consult, is former Vice President Joe Biden, who has not announced a campaign.

Despite a persistent notion that his supporters are disproportionately white male “bros,” the new survey suggests that Sanders is actually slightly more popular among black Democratic voters than white ones, indicating that the narrative that developed during the 2016 campaign may no longer hold, if it ever did.

Sanders’s support among black voters, at 28 percent, puts him in second place among that demographic, behind Biden, at 32 percent. He trailed Biden 31-25 among whites.

There appears to be a strong class element at play in the finding. The same poll found that the demographics Sanders is least popular with — at 19 and 17 percent, respectively — are Democrats who make more than $100,000 per year and Democrats who have post-graduate degrees (two qualities that typically, if not always, overlap). Because of structural wealth and income gaps, that population is heavily white.

Sanders, meanwhile, receives his strongest support support from those making less than $50,000 — a group that is, for the same reasons, much more diverse. The poll found that 30 percent of those with the lowest incomes backed Sanders.

Sen. Kamala Harris, D-Calif., meanwhile, has half as much support, at 14 percent, among black voters as Sanders, according to supplementary polling data provided to The Intercept by Morning Consult. The findings are drawn from a sample of 2,587 black, likely Democratic primary voters.

Of course, Harris’s comparatively low poll numbers might be less reflective of her appeal than the fact that she has lower name recognition than Sanders. But name recognition is the same argument Sanders supporters used to explain his inability to win over black voters in 2015 and 2016 — something he’s making a concerted effort to fix this time around.

Compared to Sanders in 2015, Harris is already fairly well-known among the Democratic primary electorate, with 79 percent having heard of her. (52 percent view her favorably, to just 11 percent unfavorably.) It remains to be seen whether an argument that was casually dismissed when made by Sanders supporters will now be exploited by supporters of Harris.

The preference for Sanders among black voters might be better explained by ideology than identity. February’s Harvard-Harris poll found that 56 percent of black voters preferred a “mostly socialist” economic system, against 44 percent who want a “mostly capitalist” one.

The findings pose both challenges and opportunities for Sanders. Wealthy and middle-class Democrats tend to be more likely to vote than the working class and poor, but Sanders is running a 50-state field and digital program that aims to unleash over a million Sanders volunteers to register and turn out voters who have stayed home in the past. That work could then pay dividends in the general election, which was decided in three states by just tens of thousands of votes in 2016.

Registering and turning out new voters has long been the vision of progressive campaigns. But because it’s extraordinarily difficult, most campaigns stick to the traditional approach of raising big money to pay for television ads that persuade undecided but dependable voters. The upside of the Sanders strategy is that it could reshape the political electorate, creating new possibilities for his agenda in Washington.

The Morning Consult poll found Harris and Warren trailing Biden and Sanders. Among all Democratic primary voters, Biden, Sanders, Harris, and Warren clocked in at 31, 27, 11, and 7 percent, respectively. Morning Consult also divided their sample into early primary states and found the ranking didn’t change, though the numbers shifted slightly, to 34, 29, 8 and 6 percent.

It’s difficult to discern an ideological pattern here. The second choice of a plurality of Sanders voters was Biden, while the same was true in reverse, even though the two politicians have radically different politics. The leading second pick among Warren voters was Sanders.

All the typical caveats apply: This is just one survey; the first votes won’t be cast for nearly a year; much could still change; and on, and on. But the findings map with other similar polls and suggest that anybody watching the presidential campaign solely through the lens of Twitter may be in for a shock when the votes begin to be counted — whether they’re armed with a stopwatch or not.

Ryan Grim is the author of the forthcoming book We’ve Got People: From Jesse Jackson to Alexandria Ocasio-Cortez, the End of Big Money and the Rise of a Movement. Sign up here to get an email when it is released.