In Leaked Recording, Cory Booker Says He and AIPAC President “Text Message Back and Forth Like Teenagers”

Even as the progressive wing of the Democratic Party has shown willingness to criticize Israel, Booker has tried to smooth over the widening rift. 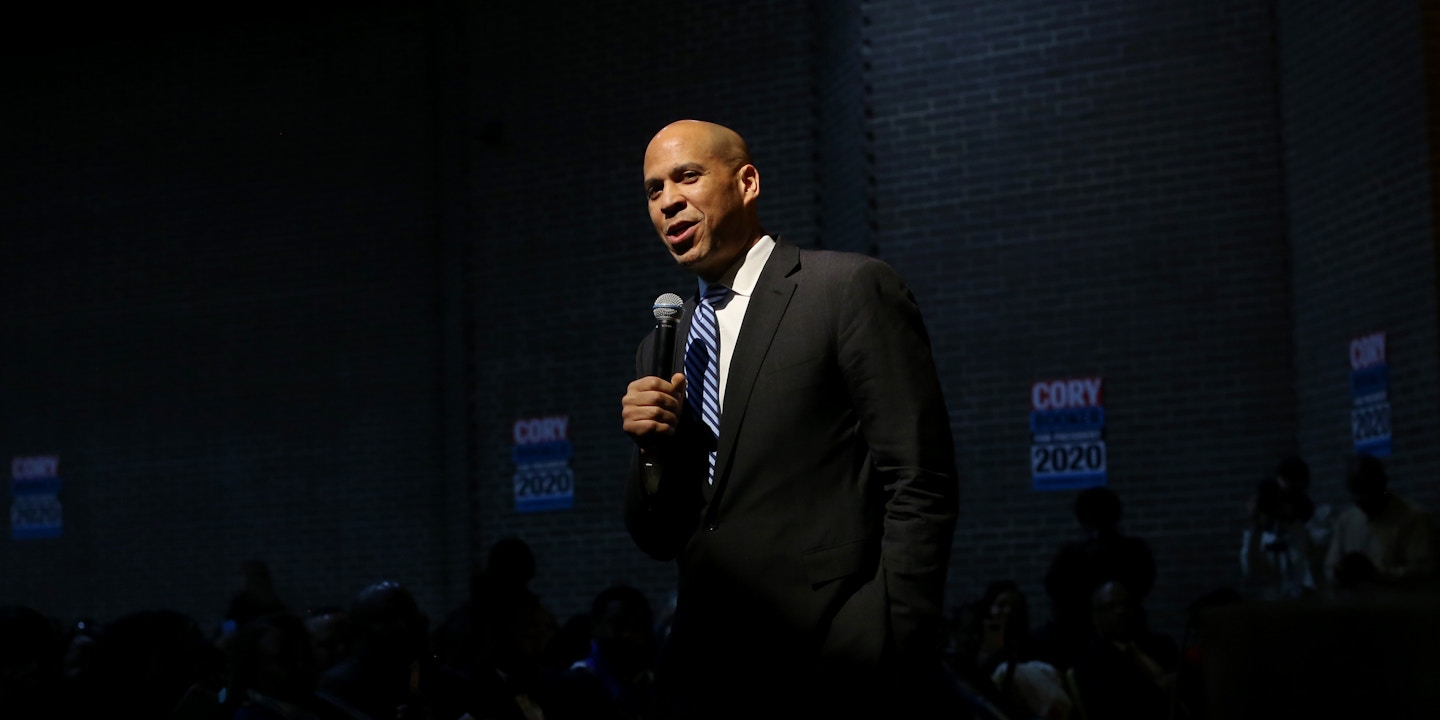 In a closed-door meeting with activists from the American Israel Public Affairs Committee on Tuesday,  presidential candidate Sen. Cory Booker, D-N.J., spoke about working closely with the organization and his desire to create a “unified voice from Congress” against the boycott, divestment, and sanctions movement, or BDS.

Booker spoke to AIPAC members from New Jersey at the organization’s annual policy conference in Washington, D.C., a gathering of thousands of activists from around the country, culminating in a lobbying effort on Capitol Hill. Booker’s appearance came at a contentious time; last week, the progressive advocacy group MoveOn called on 2020 candidates to skip the conference, and at least five of the Democrats declined to attend.

Booker’s remarks, some of which were first reported by the Jerusalem Post, did not appear on a schedule of on-the-record events for journalists covering the conference. The Intercept obtained a 35-minute audio recording of the session from a conference attendee and is publishing the recording in full here.

AIPAC did not respond to multiple requests for comment. A spokesperson for Booker reviewed a transcript of the audio and confirmed that it matched what was said, but declined to comment further.

Booker began his remarks by thanking AIPAC president Mort Fridman for his “leadership and his friendship,” telling the crowd that he and Fridman “talk often” and “text message back and forth like teenagers.”

Much of Booker’s address focused on opposing the nationwide rise in bigotry and anti-Semitism, and he cited the FBI’s finding that between 2016 and 2017, hate crimes in New Jersey alone rose by 76 percent.

Later, Booker told a story about rushing to Dulles Airport after President Donald Trump’s Muslim ban was announced, and said he was inspired by Jewish activists to vocally participate in protests. “This is the Jewish way,” said Booker, paraphrasing the Torah. “Love strangers, for you were once a stranger in a strange land.”

In describing his opposition to anti-Semitism, Booker continually brought up congressional legislation aimed at punishing BDS, a global movement focused on pressuring Israel to end human rights violations and its military occupation of the Palestinian territories. The disruption of BDS activism is an Israeli foreign policy priority, and AIPAC has successfully lobbied Congress, as well as numerous state and local legislatures, to sanction the BDS movement.

“Let me be clear,” Booker said. “Anti-Semitism is un-American. It is anti- American. It violates, most deeply, our commonly held values, and we must take steps on the global stage against vicious acts that target hatred. That is why I’m a co-sponsor of Senate Bill 720, the Israel Anti-Boycott Act, which opposes international efforts to encourage BDS while protecting First Amendment rights.”

The Israel Anti-Boycott Act, introduced by Sens. Ben Cardin, D-Md., and Rob Portman, R-Ohio, would tweak U.S. export law to discourage American companies from joining international organizations in boycotting Israel. The bill steadily gained support until the American Civil Liberties Union announced its opposition, arguing that the text could be interpreted to allow criminal penalties for nonviolent activism. The bill was later changed to reflect those concerns, but it remains controversial, and Booker is the only 2020 Democratic candidate from the Senate who is a co-sponsor.

Bipartisan unity was a major focus of Booker’s address, in which he denounced Vice President Mike Pence’s remarks to AIPAC earlier in the week as “rank partisanship” and “a cynical attempt to drive a wedge through the pro-Israel community.” Pence had called Trump “the greatest friend of the Jewish people and the state of Israel ever to sit in the Oval Office” and criticized Democratic candidates who skipped the conference.

“I listened to the vice president yesterday,” said Booker. “There was no grace in his remarks. There was no ‘let’s reach out and unify Democrats and Republicans.’”

In the past, AIPAC has always positioned itself as a staunchly bipartisan organization, winning near-universal support for its legislative priorities. Past policy conferences have made a show of Democrats speaking alongside Republicans. Last year, Reps. Steny Hoyer, D-Md., and Kevin McCarthy, R-Calif., both leadership members in their respective parties, walked onstage together and spoke about their commitment to the U.S.-Israel alliance.

But in recent years, Republicans and Israeli Prime Minister Benjamin Netanyahu have split with that tradition, and the Trump administration has tried to make the case to AIPAC’s constituency that it is more willing to deliver on Israel’s geopolitical priorities. The administration stopped abiding by the terms of the Obama-era Iran deal, which AIPAC opposed. They have moved the U.S. Embassy from Tel Aviv to Jerusalem; recognized the occupied Golan Heights as Israeli territory; shunned Palestine at the United Nations; and cut the U.S. contribution to the U.N. agency supporting Palestinian refugees.

Trump, more bluntly, has tweeted in support of a “Jexodus,” a so-called Jewish Exodus from the Democratic Party, but survey data does not suggest that Jewish voters — most of whom vote liberal and Democratic — are flocking to support him.

But even as the progressive wing of the Democratic party has increasingly shown a willingness to criticize Israel, Booker has tried to smooth over the widening rift.

“Don’t fall prey to cynical attempts to try to pit members of this great organization against the Democratic Party,” he told the audience Tuesday. “We, right now, need voices in our country that are going to show the tribalism that is deepening in our country, that undermines obvious things to do like condemning the BDS movement.”

Booker also singled out Senate Majority Leader Mitch McConnell, R-Ky., for criticism, accusing him of playing politics with anti-BDS legislation. In February, Senate Republicans passed a legislation package that included a Republican anti-BDS measure, authored by Sen. Marco Rubio, R-Fla. Booker argued that the package was not designed to get bipartisan buy-in, and McConnell should have advanced other anti-BDS legislation instead.

Booker told the audience that he had sponsored an amendment that would prevent states and localities from making their employees promise not to boycott Israel, a measure that he said would make the bill acceptable to both parties.

“Mitch McConnell, in a cynical way, put a bill on the floor,” Booker said. “So I turned to AIPAC, to my friends, the leadership, and said, ‘Well, here’s a perfect amendment that can cure this bill, get a united Senate voice against BDS.’ But my amendment wasn’t even given a vote.”

Without naming Rep. Ilhan Omar, D-Minn., Booker also condemned her recent remarks as “absolutely unacceptable.” Tweeting about AIPAC’s influence in Congress last month, Omar wrote: “It’s all about the Benjamins, baby” – referencing pro-Israel political action committees and their ability to raise money for candidates. Critics argued that the tweet invoked anti-Semitic tropes, and Omar later apologized, and said her intention was not to offend Jewish constituents.

As part of his presidential campaign, Booker said, he had the “courage to speak to my own party” to try to find unity on a number of issues, including Israel.

Booker also told the audience that when Netanyahu addressed Congress during the Obama administration in opposition to the Iran deal, Booker worked with AIPAC to try to stop fellow Democrats from boycotting the speech, “because we need to show a unified front in our support for Israel.”

Before Booker took questions, Fridman told the audience that Booker was quick to assure conference organizers he would attend, despite pressure from progressive groups.

“Cory was the subject of some fake news,” Fridman said. “An organization threatened a number of presidential candidates and said ‘don’t show up to AIPAC.’  I immediately got a call from Cory’s office saying well obviously Cory’s gonna be there… . Cory stands with the state of Israel. And Cory stands with the US –Israel alliance.”

Correction: March 30, 2019, 3:52 p.m. EDT
An earlier version of this story incorrectly said that Booker served in the House of Representatives during the Obama administration. Booker has been in the Senate since he won a special election in October 2013.