To pipeline opponents in Pine Ridge, the floods prove their point: Without a halt to fossil fuel extraction, vulnerable communities will pay the price. 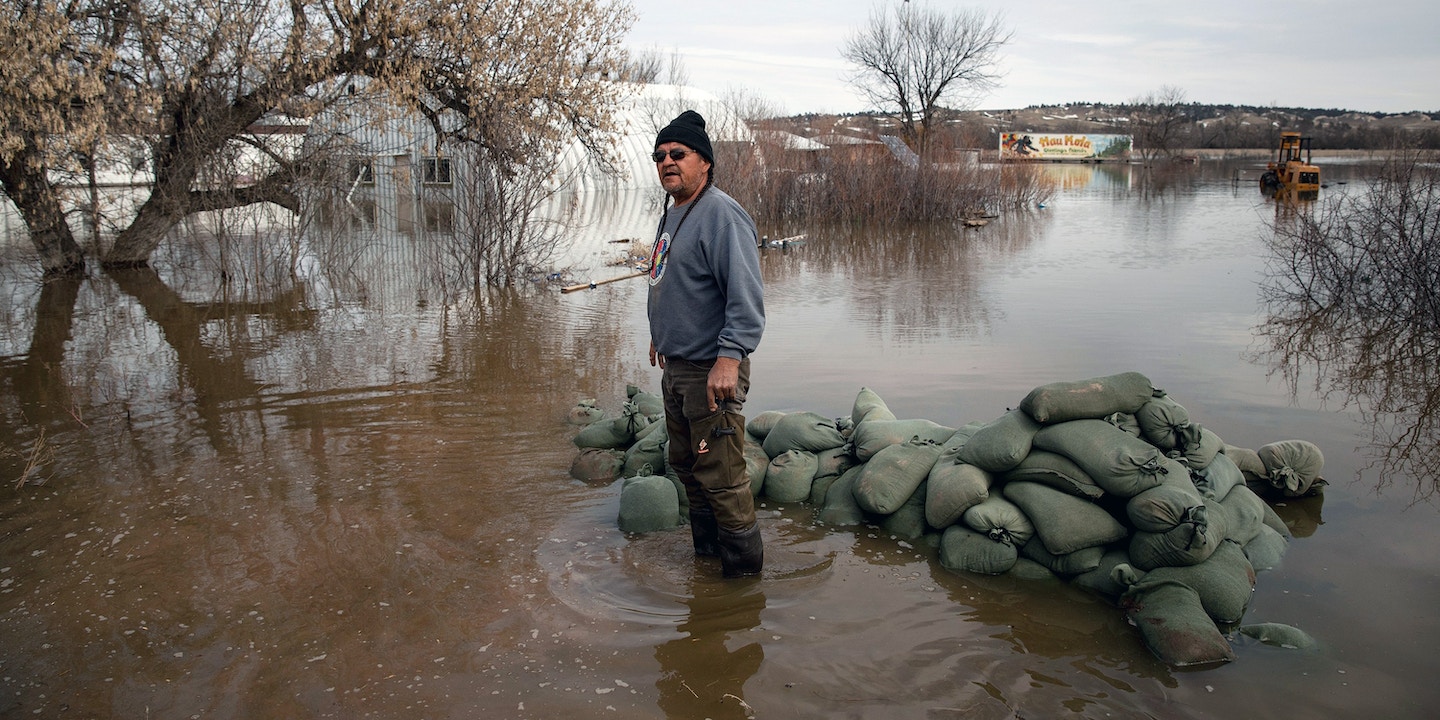 Three weeks after the flooding began on the Pine Ridge Reservation in South Dakota, families still remain isolated, trapped in their homes by water and mud, even as the water has begun to subside. On South Dakota’s nine Indian reservations, spring is gumbo season — when sticky, gummy, clay mud is exposed after the snow melts. In the aftermath of the floods, it’s so thick and deep that heavy equipment has been lost to it. In many areas, the miles of gravel and dirt roads that make up much of the reservations’ transportation infrastructure have washed away or been made impassable by gumbo. Septic tanks have overflowed, adding fecal matter to the muck.

The Oglala Sioux tribe estimates that 1,500 people are displaced from their homes and 500 lack access to drinking water. Teams of young men on horseback and the occasional helicopter have been helping deliver food packages, water, and medical support to isolated homes.

Farther north, 20-45 people have been staying in the Standing Rock Sioux tribe’s community center every night, according to Waniya Locke, who lives on the reservation and has been assisting with rescue efforts. The center lacks heat, so they’ve been relying on space heaters and thick blankets to keep warm. She estimates that around 300 people have been displaced from their homes. Last week, the nearby Cheyenne River Sioux tribe ordered the evacuation of a section of its reservation, airlifting out three families.

Asked what the long-term recovery might look like, Locke shrugged. “We’re not even to the point of discussing recovery, because we’re still in it.” Water from White Clay Creek pools near the ranch of Ernie Little on the Pine Ridge Indian Reservation, S.D., on March 25, 2019.

In the Midst of a Climate Crisis, a New Pipeline Permit

On Tuesday, the Oglala Sioux Tribe joined the state legislature in calling on officials in Washington to declare a federal disaster in South Dakota, which would make available aid from the Federal Emergency Management Agency. “Rather than declaring emergencies that don’t exist, President Trump needs to pay attention to the ones that do,” said Tribal Chair Julian Bear Runner, in a statement referencing Trump’s declaration of a national emergency on the U.S. border with Mexico. “I call upon him to send us help before lives are further disrupted.”

He also requested that Trump drop his efforts to expedite construction of the Keystone XL pipeline. On Friday, in the midst of the crisis, Trump issued a new presidential permit that would allow the pipeline to cross the Canadian border into the U.S. “Trump’s decision to ram KXL through while our families suffer feels like being kicked while we’re down,” Bear Runner said.

The same Native communities that have been hit hardest by Midwestern flooding are also some of the most vocally opposed to the Keystone XL tar sands pipeline, which would pump up to 830,000 barrels of tar sands oil per day from Alberta, Canada, through Montana, South Dakota, and Nebraska. Many Oceti Sakowin people, known by the U.S. government as the Sioux, are concerned that the pipeline will leak, contaminating the rivers and waterways that provide the reservations’ drinking water and that lie within territory the U.S. government illegally swindled away more than a century ago. They’re also worried about the longer term climate impacts of continuing the production of dirty tar sands oil.

To opponents on Pine Ridge, the floods prove their point about the pipeline: Without a halt to fossil fuel extraction, the nation’s most vulnerable communities will pay the heaviest price for climate-fueled flooding, droughts, extreme weather, and ecosystem collapse. Scientists say the weather conditions that led to the flooding have become more likely because of climate change. “The use of fossil fuels has led to this extraordinary weather event and many other disasters,” Bear Runner said. “Keystone XL will only continue to exacerbate the cycle of destruction in the future.”

It’s not the only contentious decision that was finalized in the midst of the disaster. Last week, Gov. Kristi Noem signed into law two bills designed to help the state government pay for the costs of policing what are expected to be massive, Indigenous-led demonstrations if construction begins. One of the two laws, SB 189, creates new civil penalties for “riot boosting,” which would apply not only to riot participants but to anyone who “directs, advises, encourages, or solicits other persons participating in the riot to acts of force or violence.”

The American Civil Liberties Union is suing South Dakota for infringing on the free speech rights of organizations including the Indigenous Environmental Network, Sierra Club, Dakota Rural Action, and the NDN Collective, all of which assert that the law will limit their ability to provide training and support to pipeline opponents.

At the single hearing for the two bills, a lobbyist for the governor’s office called the riot-boosting law a key aspect of what he hoped would be “the next generation model of funding pipeline construction.” The second law, SB 190, has received less attention. That law creates a fund from which law enforcement can draw money as they police the protests. As Remi Bald Eagle, head of intergovernmental affairs for the Cheyenne River Sioux tribe, put it, “The PEACE fund does nothing more than create mercenaries out of state law enforcement institutions.”

Much of the money in the PEACE fund would come directly from the pipeline parent company, TransCanada. The state government would bill TransCanada monthly for policing costs, up to $20 million. Additional PEACE money would come from a “Riot Boosting Recovery Fund,” made up of penalties from the new riot law. If the state managed to obtain grants from the Justice Department or money from Congress, that would also go into the PEACE fund. Peri Pourier, left, a candidate for the South Dakota Legislature, and her partner, Ernest Weston, stand for a portrait in Porcupine on the Pine Ridge Indian Reservation, S.D., on Oct. 24, 2018.

According to state Rep. Peri Pourier, who’s from Pine Ridge, one of the biggest problems with the pair of laws is that while TransCanada and an array of public officials, including law enforcement and county representatives, were consulted, the state’s nine tribes were left out of discussions entirely.

Tribal leaders have noted that the tribes are likely to accrue large expenses if protests break out, since both protest camps and “man camps,” temporary housing sites for pipeline workers, are likely to be located near reservation borders. Indigenous women across the U.S. are disproportionately victims of violent crimes, including homicide and sexual assault, and many are concerned that violence against women will rise as temporary, mostly male workers flood the area. Yet already under-resourced tribes are apparently not eligible to access the PEACE fund.

Pourier decided to run for office in mostly white, Republican South Dakota precisely because tribes are routinely left out of decisions that impact them the most. Pourier was part of a historic wave of Indigenous women elected into state and federal offices last November — a result of indigenous cultural and political organizing that has been reinvigorated nationwide, in part because of pipeline organizing. She and two other Native women joined three incumbent Native men in the state legislature. The Native legislators were among the handful who voted against the bills.

“My greatest hope is that Native women and Native men in those spaces becomes normalized,” Pourier said. But the road will be uphill. “These political structures were not created for us; the reservation was created for us.”

After the election, a handful of Republican legislators accused Pourier and newly elected state Sen. Red Dawn Foster, also from Pine Ridge, of election fraud. They claimed that the two Oglala Lakota elected officials violated a state law that says legislators must be residents of the state for two years before taking office. Pourier, they said, spent part of the two years in Nebraska, and Foster was in Colorado. An investigation ultimately confirmed their eligibility.

“I was a resident of South Dakota since 2015 — they took one piece here and one piece there and created a picture and a narrative about me that was completely untrue,” said Pourier. “It was ridiculous for them to argue that somehow an Oglala Lakota was not from her Indigenous homeland.”

Pourier has spent the last few weeks helping coordinate volunteers and supply deliveries on the reservation, as co-founder of the nonprofit Pine Ridge Reservation Emergency Relief, formed in the wake of the disaster. Although Noem sent in the National Guard last week to distribute drinking water, Pourier said that much of the relief efforts have come from community members.

“We’ve never had adequate resources; we don’t know what it’s like to be in the land of plenty,” she said. “This is climate change, it’s hitting us the hardest, and the status quo is not sustainable.”

Last Thursday, in the midst of all the bad news, five Native women gathered in front of Rapid City’s city hall to announce that they’ll be running for elected office this June in Rapid City, one of South Dakota’s largest and most Native municipalities.

Like Pourier, mayoral candidate Natalie Stites Means, a member of the Cheyenne River Sioux tribe, spent time at one of the anti-Dakota Access pipeline resistance camps at Standing Rock in 2016. “I believe that we are smart enough and conscious enough to recognize that this way of fossil fuels and big oil does not include a future for anyone on this earth,” she said in an interview. “We can do better.”