Elizabeth Warren Presses Pentagon on Its Planning for Climate Change

Establishing green standards in military procurement and other government agencies, such as the Postal Service, could be a major driver of decarbonization 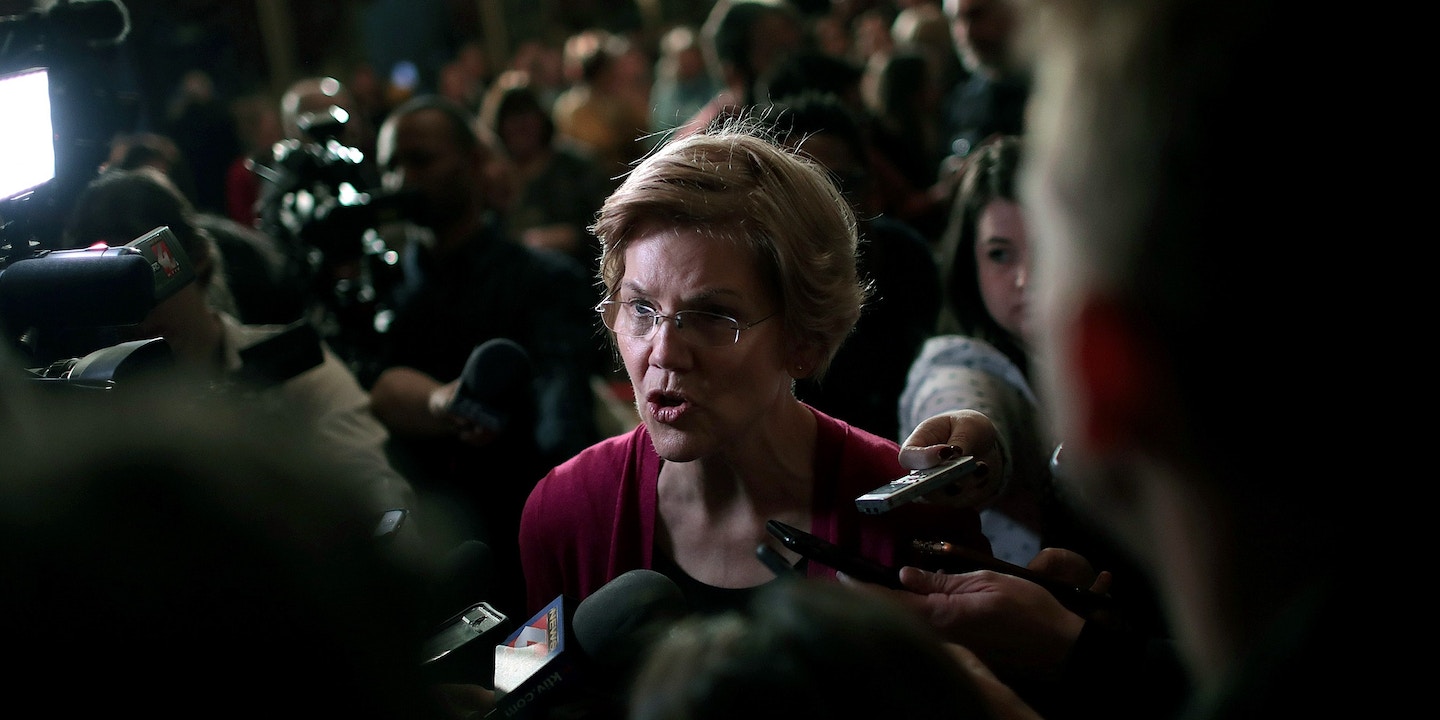 One of America’s major political parties may not yet be willing to acknowledge that climate change is real, but it is already having significant effects on the U.S. military. Flooding in Nebraska and a hurricane in Florida that damaged military installations led to a recent Pentagon request of $5 billion in relief money. Now Sens. Elizabeth Warren, D-Mass., and Jack Reed, D-R.I., are calling on the Government Accountability Office to assess military contractors’ vulnerability to climate risks.

“While there has been analysis of the impact of climate change on military facilities,” they write, “there has been no comprehensive analysis of the risks of climate change on the network of military contractors that provide billions of dollars of goods, services, and research and development” to the Department of Defense. As the letter released this afternoon notes, defense companies accepted $300 billion in federal contracts in 2017 and constitute a foundational part of U.S. military operations. “This is a significant gap.”

Specifically, Warren and Reed have asked the GAO to investigate three questions:

The letter follows a hearing held last Tuesday in the House House Oversight and Reform Committee on climate change and national security, featuring testimony from former Secretary of State John Kerry and former Pentagon head Chuck Hagel, and involving a series of spats between the former cabinet members and GOP senators over the importance of climate science.

As Warren and Reed indicate, the Pentagon, across administrations, has long factored climate change into documents like its Quadrennial Defense Review. Their letter quotes the 2010 review at length, which highlights the fact that “climate change will shape the operating environment, roles, and missions that we undertake,” and pose a risk to its installations — i.e., bases — and certain operations. As Rep. Deb Haaland, D-N.M., has pointed out recently, training operations in the southwest have been limited in recent years by dangerous temperatures, and aviation training exercises have been disrupted by wildfire smoke, so-called black-flag days.

Major contractors like Lockheed Martin and Northman Grumman have each voluntarily released some information about their climate risks. “But a staff review of the five largest military contractors’ annual financial disclosures revealed no comprehensive reporting on climate threats to operations, and the potential downstream impacts on military readiness,” the senators write.

In 2015, Barack Obama signed an Executive Order pledging to reduce governmental greenhouse gas emissions by 40 percent across agencies over a decade. The push led to the creation of the Federal Supplier Greenhouse Gas Management Scorecard, collating whether companies with government contracts of $1 billion and up had set greenhouse gas emissions reduction targets, and whether they had disclosed their emissions and climate risks. The Scorecard was compiled in 2015 and 2016 and discontinued under the Trump administration when Trump revoked the order.

Neil Bhatiya, associate fellow in the Energy, Economics, and Security Program at the Center for a New American Security, says that military climate risk assessments generally fall into one of two buckets: threats to Defense Department infrastructure and operations, and analyses of what sorts of future conflicts the military is likely to get involved in as a result of climate change, widely described in the defense community as a “threat multiplier.” The latter conversation has expanded amid the Syrian civil war, which several academics have attributed in part to devastating, climate-fueled droughts that pushed rural Syrians into cities starved of resources and investment, sparking some of the initial protests during the Arab Spring in 2011.

Kerry echoed this line of thinking on Tuesday, telling senators that rising temperatures mean that people “have to move because they can’t eat, can’t drink. The instability that is created would be manna from heaven for extremists.”

The Pentagon is also a major consumer of fossil fuels. As author Christian Parenti — who’s written extensively on the link between climate and conflict — has argued, establishing green standards in military procurement and other government agencies, such as the Postal Service, could be a major driver of decarbonization. The Department of Defense Energy Security Act, first introduced in 2010, called on the department to derive a quarter of its electricity from renewables by 2025.

The Defense Department’s consistent analysis of climate risk is novel among government agencies. While the National Climate Assessment is released every four years and compiled by 13 federal agencies, in-depth analyses of climate impacts aren’t systematically integrated into government decision-making. Germany and Sweden each have federal agencies assess the impact of climate change and climate policy on things like financial markets. The Bank of England, Britain’s central bank, has also begun to investigate investment and commercial banks’ exposure to climate risks, and Shadow Chancellor of the Exchequer John McDonnell has said that a Labour government would task its Office for Budget Responsibility with integrating global warming into its macroeconomic forecasting.

Before declaring her presidential run last September, Warren led a group of senators in releasing a bill that requires publicly listed companies to disclose their climate-related risks, the Climate Risk Disclosure Act of 2018. Like several other 2020 primary hopefuls, Warren has also backed calls for a Green New Deal.