Instead of an honest reading of the Mueller report, Trump’s attorney general distorted it. Now, Democrats are calling for his resignation. 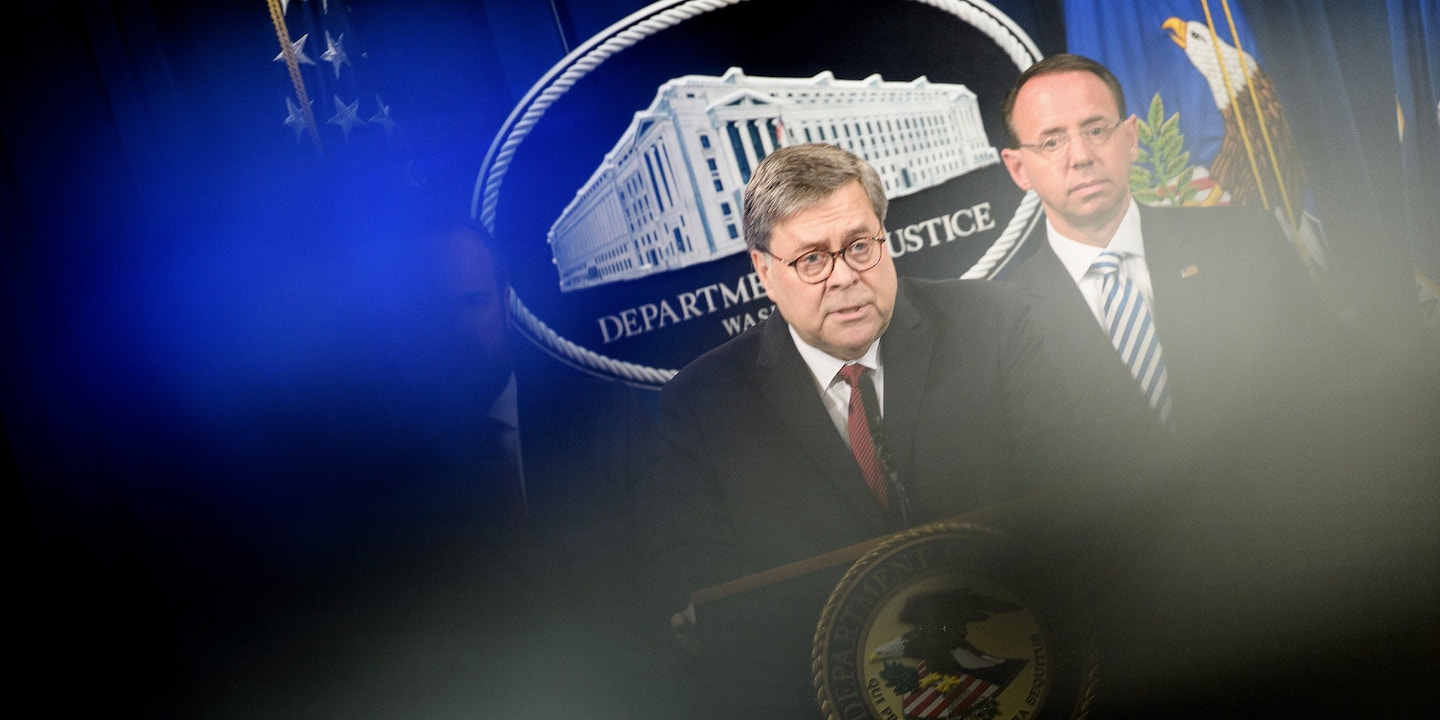 Attorney General William Barr is coming under increasing fire from congressional Democrats for statements he made before the release of the Mueller report. Critics say the remarks purposefully downplayed how damaging special counsel Robert Mueller’s report was for President Donald Trump.

House Judiciary Committee Chair Jerrold Nadler, D-N.Y., said Friday morning that his committee has issued a subpoena to the Justice Department to obtain the full, unredacted report. The subpoena demands that the Justice Department turn over the report by May 1. Nadler also asked Mueller to testify before his committee. “It is clear Congress and the American people must hear from Special Counsel Robert Mueller in person to better understand his findings,” Nadler said.

Critics said both Barr’s press conference and the four-page letter were part of Barr’s attempt to whitewash the Mueller report’s findings.

The subpoena comes in the wake of the Justice Department’s release of a redacted version of the Mueller report on Thursday. The redacted version was made public only after Barr gave a press conference early in the morning, in which he sought to claim that the report effectively exonerated Trump and those around him. That press conference followed an earlier statement Barr issued on March 24, in the form of a four-page letter that claimed to summarize Mueller’s findings. Critics said both his press conference and the four-page letter were part of Barr’s attempt to whitewash the Mueller report’s findings and spin the public narrative about the report before it was actually released.

In a joint statement Thursday after the report’s release, House Speaker Nancy Pelosi, D-Calif., and Senate Minority Leader Chuck Schumer, D-N.Y., charged that Barr “deliberately distorted significant portions of Special Counsel Mueller’s report.” They added that Mueller’s report “paints a disturbing picture of a president who has been weaving a web of deceit, lies and improper behavior and acting as if the law doesn’t apply to him. But if you hadn’t read the report and listened only to Mr. Barr, you wouldn’t have known any of that because Mr. Barr has been so misleading.”

Rep. Adam Schiff, the chair of the House Intelligence Committee and a California Democrat, said Thursday that Barr “did a great disservice to the country by misrepresenting significant parts of the Mueller report, by attempting to put a positive spin for the president on the special counsel’s findings.”

In the wake of the report’s release, other Democrats have called on Barr to resign, including Rep. Eric Swalwell, a California Democrat who is now running for president. Swalwell took to Twitter to attack Barr, yet another sign that Twitter has become the battlefield of choice for political combat in the Trump era.

“Russia attacked us,” Swalwell wrote on Twitter. “The #MuellerReport details a multiplicity of contacts b/w Russia & @realDonaldTrump’s team and that Trump; his team ‘materially impaired’ the investigation. Yet, OUR Attorney General acts as Trump’s defense attorney. He can’t represent both. Barr must resign.”

In particular, most observers pointed to stark differences between Barr’s statements and the section in the Mueller report concerning the possibility that Trump sought to impede the Trump-Russia inquiry and thus, might be guilty of obstruction of justice. In fact, the Mueller report makes it clear that a key reason Mueller did not seek to prosecute Trump for obstruction was a longstanding Justice Department legal opinion saying that the Justice Department can’t indict a sitting president. Barr omitted that part of Mueller’s reasoning in his statements saying that Mueller hadn’t decided whether to charge Trump.

“Now that we have seen almost the entire report of more than 400 pages, we know Barr intentionally misled the American people about Mueller’s findings and his legal reasoning,” wrote Renato Mariotti, a former federal prosecutor and Politico columnist who unsuccessfully ran last year as a Democrat to be Illinois attorney general. “Mueller’s report detailed extraordinary efforts by Trump to abuse his power as president to undermine Mueller’s investigation,” Mariotti added. “The case is so detailed that it is hard to escape the conclusion that Mueller could have indicted and convicted Trump for obstruction of justice—if he were permitted to do so. And the reason he is not permitted to do so is very clear: Department of Justice policy prohibits the indictment of a sitting president.”

Barr’s statements prior to the release of the report were also misleading when it came to the issues of Trump and Russian interference in the election.

Barr’s statements prior to the release of the report, however, were also misleading when it came to the issues of Trump and Russian interference in the election. Barr discussed but did not linger on the portion of the report about the Russian cyberattacks against Hillary Clinton’s campaign — attacks that were designed to help Trump win the election. And Barr was disingenuous in the way he sought to cut and parse Mueller’s report to make Trump look better on issues related to contacts and links between the Trump campaign and Russia.

The [Russian] social media campaign and the [Russian intelligence] hacking operations coincided with a series of contacts between Trump Campaign officials and individuals with ties to the Russian government. [Mueller’s] Office investigated whether those contacts reflected or resulted in the Campaign conspiring or coordinating with Russia in its election-interference activities. Although the investigation established that the Russian government perceived it would benefit from a Trump presidency and worked to secure that outcome, and that the Campaign expected it would benefit electorally from information stolen and released through Russian efforts, the investigation did not establish that members of the Trump Campaign conspired with the Russian government in its election interference activities.

In fact, the Mueller report’s findings on contacts between the Trump circle and Russia are extensive and damning. The report does not exonerate Trump or his campaign; instead, Mueller says he didn’t have enough evidence to bring criminal charges for conspiring with the Russians. The report states that “while the investigation identified numerous links between individuals with ties to the Russian government and individuals associated with the Trump Campaign, the evidence was not sufficient to support criminal charges. Among other things, the evidence was not sufficient to charge any Campaign official as an unregistered agent of the Russian government or other Russian principal.”

“Further,” the report adds, “the evidence was not sufficient to charge that any member of the Trump Campaign conspired with representatives of the Russian government to interfere in the 2016 election.” But the report went on to say that the “investigation established that several individuals affiliated with the Trump Campaign lied to [Mueller’s team] and to Congress, about their interactions with Russian-affiliated individuals and related matters. Those lies materially impaired the investigation of Russian election interference.”

Far from vindicating Trump, the Mueller report leaves plenty of troubling questions unresolved for Congress and the press to investigate. Above all, the report shows that the Russians interfered in the election to help Trump win, and Trump was happy for the help.

Perhaps the most haunting moment recounted in the report occurred late on the night of the 2016 election, just after Trump had been declared the winner. Kirill Dmitriev, who runs Russia’s sovereign wealth fund and is close to Russian President Vladimir Putin, received an email from someone whose name is redacted in the report. The email to Dmitriev said, simply, “Putin has won.”