Some dairy companies have begun to include a list of suicide prevention hotlines in the envelope with farmers’ checks. 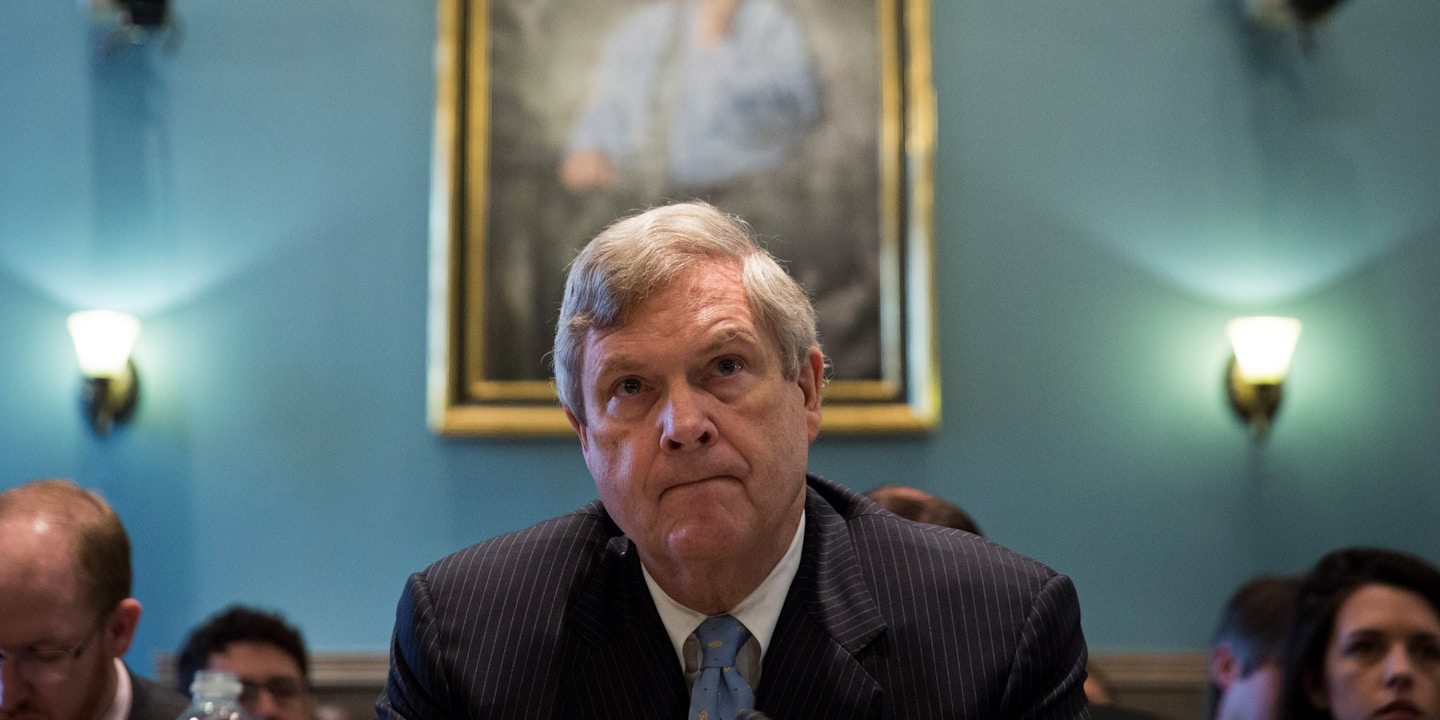 In a campaign speech on Sunday at the Swine Arena in Osage, Iowa, Sen. Bernie Sanders outlined an agricultural policy rooted in breaking the power of vertically integrated farm monopolies. He called for breaking up consolidations in the pork, beef, corn, and soybean seed industries; an end to “contract farming” in which farmers raise livestock they do not own at low prices predetermined by agribusinesses; re-establishing the Grain Inspection, Packers, and Stockyards Administration, which the Trump administration dissolved; and returning to a “price parity” system in which farmers can ensure a reasonable price above costs and supply is matched with demand.

Sanders is not alone among 2020 candidates in targeting big ag. Sen. Cory Booker’s strongest and most ambitious policy designs have been in the area of agriculture, and he introduced a moratorium and merger review bill last year. Sen. Elizabeth Warren’s farm policy includes reversing mergers she says should have never been approved, like the Bayer-Monsanto deal that consolidated the seed and pesticide industry. Even former Colorado Gov. John Hickenlooper has called modern antitrust enforcement a failure, supporting merger guidelines that encourage competition rather than the so-called consumer welfare standard.

With 30 percent of the Iowa economy tied up in agriculture, the concentration crisis seems like fertile ground for Democrats. The way of life of the independent family farmer is slowly slipping away, supplanted by mammoth agribusinesses: industrial-sized confinement lots, ruthless livestock companies and seed merchants, monoculture crops stretching for miles. These monopolists have grabbed a significant share of food profits; farmers used to earn 37 cents of every retail dollar, now down to only 15.

Any Democrat looking to improve life for everyday Iowans, then, could highlight preventing or reversing big ag consolidation as a way to salvage rural America. Anyone, that is, except for Tom Vilsack, former Iowa governor and former President Barack Obama’s agriculture secretary. Which makes sense, because he’s a mouthpiece for the corporate dairy industry.

Vilsack was heavily recruited to run for Senate against Republican Joni Ernst in 2020, but announced earlier this year that he would take a pass. Speaking on the “Iowa Starting Line” podcast last month, he warned Democratic candidates against talking about farm monopolies. “Well, there are a substantial number of people hired and employed by those businesses here in Iowa,” Vilsack said. “So you’re essentially saying to all of those folks, you might be out of a job. That’s not to me a winning message.”

If the conversation is about lost jobs, Vilsack has it backward: Farm consolidation causes job loss, from family farmers cashing out to Bayer cutting 12,000 jobs when it merged with Monsanto.

But his message will come as a relief to his industry employers.

Vilsack is president and CEO of the U.S. Dairy Export Council, joining just days after wrapping up as Obama’s agriculture secretary. The council’s members include the large corporate players who have made the dairy business a rolling disaster in America.

Prices for milk have plummeted since 2014, leading to the closure of around 4,600 dairy farms per year, a number that is expected to accelerate. The problem is a small set of monopoly purchasers. A single processor slowing purchases, as Grassland Dairy Products did in 2017, can lead to disaster. Some dairy companies have begun to include a list of suicide prevention hotlines in the envelope with farmers’ checks.

For the most part, only large factory farmers have remained viable; the average number of cows per dairy farm has doubled since 2004.

In the past, cooperatives would organize dairy farmers to protect their interests against consolidated buyers. But co-ops now include monopoly giants like Dairy Farmers of America, which “represents” 13,000 farmers producing 30 percent of the raw milk supply. As a hybrid producer and buyer, DFA can dictate terms to farmers in areas where there’s no alternative. They also own or partner with milk processors and marketers, meaning that they make more money when they keep prices to co-op members low.

DFA’s $14 billion in annual revenue rarely gets shared with its own members, unless forced. Last year, DFA paid out a $50 million class-action settlement to 9,000 farms for cornering the raw milk market and driving down prices in the Northeast, including Sanders’s state of Vermont. That followed a $140 million settlement in the Southeast in 2012.

Vilsack did disclose his affiliation at the top of the “Iowa Startling Line” interview, saying, “I work for dairy farmers and the dairy industry in the country as we try to export dairy products around the world.” But if farmers aren’t profiting from what they produce, expanded exports do little for them.

The U.S. Dairy Export Council is funded through direct grants from the U.S. Department of Agriculture’s Market Access Program, a marketing fund that gave the organization $4.7 million in public dollars last year, along with the dairy “checkoff” program, in which farmers kick in 7.5 cents for every 100 pounds of milk they sell for promotional campaigns. Checkoff programs have been savaged by farm reform groups and 2020 candidates like Warren, because the money often goes to lobbying activities for big ag.

In the last available disclosure form from the U.S Dairy Export Council’s corporate parent, from 2016, Vilsack’s predecessor in the organization, Thomas Suber, earned $753,620. “I’m surprisingly more busy now than I was when I was secretary,” Vilsack noted to “Iowa Starting Line.”

In the interview, Vilsack insisted that breaking up agricultural monopolies would do nothing for farmers “because a company of the broken-up companies will hold the patent to the seed. And as long as they hold the patent, they’re going to be able to license that technology to all those other smaller companies.” He suggested reducing patent protections on seeds from 20 years to five years.

This is a fine idea; Sanders actually endorsed it in his agricultural policy speech. But it skillfully avoids anything that would affect Vilsack’s job. Seeds are not the only input on farms, and crops are not the only items raised. In his answer about farm monopolies, dairy and livestock didn’t come up.

Furthermore, Vilsack completely contradicted himself moments later in the interview by saying, “It’s not so much the input costs that these guys are worried about, it’s their lack of market opportunity.” He endorsed creating local food markets (an odd thing for the head of an export council to say), where farmers can negotiate “directly as the producer with you the consumer.” This is precisely what isn’t done by Vilsack’s employers in the dairy industry, who force prices downward in anti-competitive ways.

At the beginning of the Obama administration, Vilsack’s Department of Agriculture and the Justice Department convened five public workshops around the country to discuss agricultural and antitrust enforcement. This was seen as a prelude to real action to help farmers. It led nowhere. Enforcers declined to take action. “The Obama Justice Department looked at this and decided we would have a very difficult time getting through the process,” Vilsack said to “Iowa Starting Line.” Critics argue that the administration was simply intimidated by pushback from the industry.

For his part, Vilsack failed to finalize new rules in the initial two years that would have banned big ag retaliation against farmers and given them stronger legal tools to prevent abuse. When Republicans took over Congress in 2011, they bottled up these rules for years. Vilsack only completed them in the administration’s final days, and even then in weakened form. Because they hadn’t taken effect yet, the Trump administration swiftly nullified the rules.

Pulling rank on the 2020 field, Vilsack claimed that the fervor over agricultural monopolies stems from “folks in think tanks in urban centers who have had very little experience, if any, with rural places.” Most 2020 candidates haven’t taken Vilsack’s advice, including the junior senator from the dairy state of Vermont.
“I come from a state where agriculture is very important,” Sanders told HuffPost last month. “Literally every week another farmer is going out of business … so the answer is vigorous antitrust legislation, break them up.”