Two lawsuits in Louisiana and South Dakota are the first signs of resistance to efforts by the fossil fuel industry to criminalize pipeline protests. 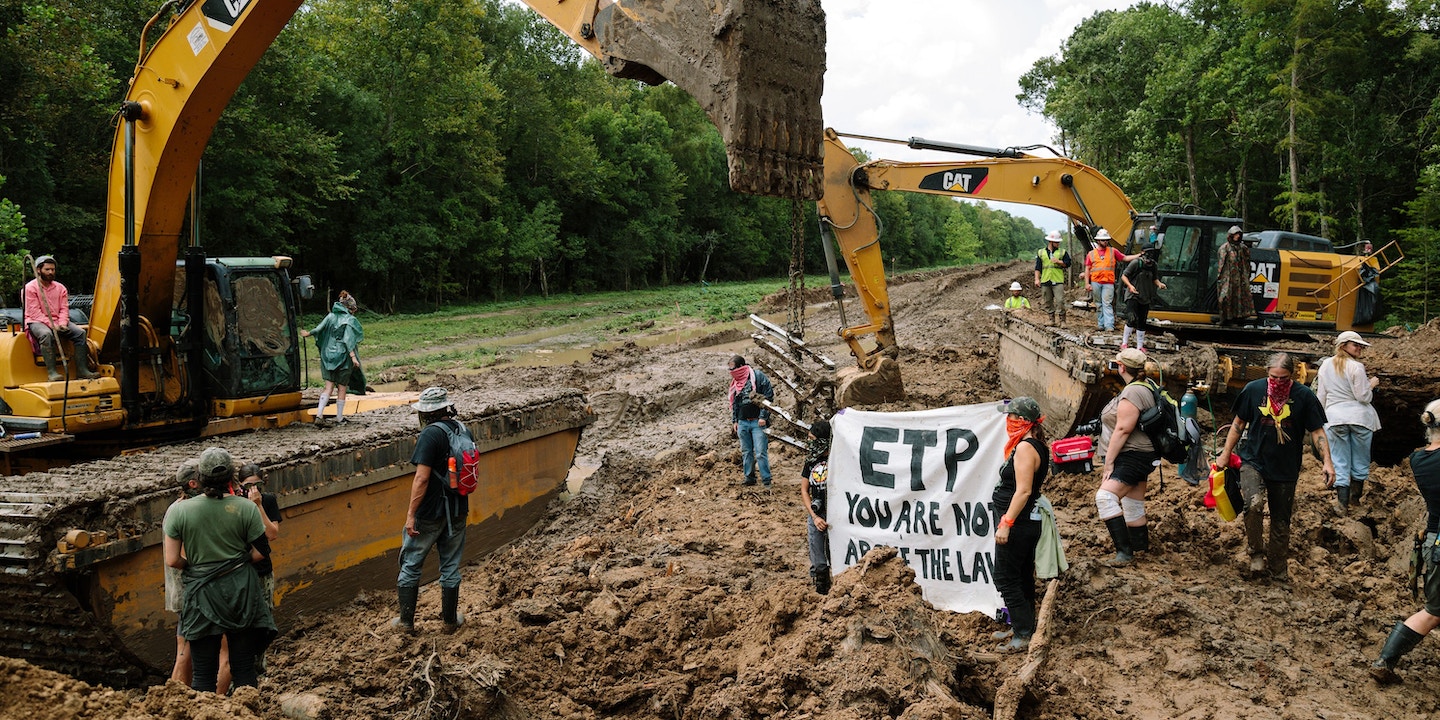 Opponents of oil and gas pipelines in three states are fighting back against new anti-protest laws aimed at suppressing fossil fuel industry dissent. Two lawsuits in Louisiana and South Dakota, and a promised suit in Texas, are the first signs of a concerted pushback against a nationwide, industry-led effort to halt the most confrontational arm of the climate movement. Since Donald Trump was inaugurated as president, at least 17 states have introduced laws that create new penalties for pipeline protesters.

It began in Oklahoma in May 2017. Gov. Mary Fallin quietly signed a law that made it a felony to trespass on property considered “critical infrastructure.” Perhaps even more egregious was language stating that any organization “found to be a conspirator” in the trespass would face fines of up to $1 million. With the Dakota Access pipeline fight at Standing Rock only recently winding down, and activists promising new protests against Oklahoma’s Diamond pipeline, it was clear what this was about. “Critical infrastructure” was defined to include oil and gas pipelines.

At the time, Donald Trump had just been sworn in, and more than a dozen anti-protest laws had been introduced across the U.S., attempting to criminalize a range of disruptive protest tactics, from blocking roads to heckling lawmakers. But two years later, it’s Oklahoma’s tack that has stuck. By December 2017, the American Legislative Exchange Council, a right-wing organization whose members include legislators and corporate lobbyists, had introduced a version of the bill as “model legislation” that it encouraged lawmakers to adopt across the U.S.

Texas came a step closer to becoming the sixth state to enact a version of the law on Monday — it awaits only reconciliation between the House and Senate versions. According to the Texas Observer, the authors of the Texas bill both recently attended ALEC conferences and an array of oil and gas companies and industry groups, including Shell Oil Company, the Texas Pipeline Association, Exxon Mobil, Enbridge, Phillips 66, and Anadarko Petroleum officially registered to support the bill.

Civil liberties, environmental, and Indigenous rights organizations argue that the laws are unconstitutional. “It’s hard to convince or even ask people with children to organize against pipelines if a mother will risk a felony,” said Jennifer Falcon, a spokesperson for Texas’s Society of Native Nations, which is organizing against the 650-mile Jupiter oil pipeline and Kinder Morgan’s 430-mile Permian Highway gas pipeline, both of which would carry fossil fuels from the center of West Texas’s fracking boom to the port of Brownsville on the Gulf Coast. “We intend to pursue this in higher courts,” she added. Lawyers, however, have advised the group that legal success in Texas will be elusive unless someone is charged under the law.

Instead, Louisiana and South Dakota will be the first to test the constitutional waters. A total of 19 anti-pipeline activists and organizations have signed on as plaintiffs in two lawsuits arguing that the states’ anti-protest laws are unconstitutionally vague and violate the First Amendment.

Louisiana Suit Asks, Who is the True Trespasser?

The Louisiana law was drafted by Tyler Gray, president and general counsel of the Louisiana Mid-Continent Oil and Gas Association, and was introduced in the midst of construction of the 162-mile Bayou Bridge oil pipeline, which runs through 700 bodies of water. Arrests began just over a week after it went into effect on August 1 of last year, eliminating any question about its purpose. More than a dozen pipeline opponents have been charged under the law, providing the first real test in the nation of critical infrastructure laws’ utility.

Where land ownership is contested, deciphering which party is the trespasser can become blurry, and the nature of the arrests quickly illuminated the constitutional dubiousness of the new critical infrastructure felonies.

The remote swampland on which Anne White Hat allegedly trespassed is co-owned by more than 100 landowners — passed down, undivided, to a growing diaspora of family members for generations. Normally, if a company wants to build a pipeline on private property, it either negotiates permission from the landowner or obtains eminent domain in court. The Bayou Bridge Pipeline Company, or BBP, which is owned by Dakota Access parent corporation Energy Transfer, didn’t bother to do either and began construction without the legally required permissions. In response, landowner Peter Aaslestad sought an injunction against BBP on July 26, 2018.

A handful of owners who opposed BBP’s actions gave permission for pipeline protesters to access their land — and alerted the local St. Martin Parish Sheriff’s Department. White Hat, a 51-year-old Lakota grant writer and herbalist who lives in New Orleans, says she arrived on September 3 to the contested land, which was now under construction, with no intention of being arrested. Fifty others joined her to oppose the operation, she said. On September 18, as she was boarding a boat bound for the bayou to monitor construction for violations, White Hat was arrested and charged with two felonies under the new law, for trespassing two weeks before. She paid a $21,000 bond to get out of jail.

It’s unclear whether White Hat’s felony charges will stick. Louisiana has four years to decide whether to pursue the charges, which together carry a maximum of 10 years’ prison time. It’s a common scenario; during the Dakota Access pipeline fight, numerous opponents were arrested under charges that carried harsh sentences that were ultimately dropped. Asked whether White Hat’s charges would make her hesitate to participate in another pipeline protest where police might be present, she said, “It does give me pause to think.”

For now, she has joined two other pipeline opponents, an independent journalist, six landowners, and three environmental justice organizations in suing Louisiana’s attorney general, district attorney, and the sheriff of St. Martin Parish. The lawsuit, filed Wednesday by the Center for Constitutional Rights, argues that the law is “so vague, overly broad, and sweeping in scope that people in the state cannot be sure of where in the vicinity of Louisiana’s vast 125,000-mile network of pipelines they can legally be present, who decides where they can be present, or what conduct is prohibited.”

“Its actual aim,” the suit continues, “is to chill, and harshly punish, speech and expression in opposition to pipeline projects.”

In a statement, a spokesperson for the attorney general’s office, Jacques Ambers, said, “Attorney General Jeff Landry will vigorously defend the law as our State has an obvious and compelling reason to protect vital infrastructure from criminal trespass, damage, or possible attack. The environmental groups who filed this suit are free to protest, but they are not free to do it in a manner that obstructs and threatens infrastructure. That should be immediately apparent to rational people.” Sheriff Ronald Theriot and District Attorney Bo Duhé did not respond to requests for comment.

In December 2018, a court backed landowner Aaslestad, affirming that it was BBP that was trespassing on his land. “A representative of the pipeline company testified during trial that the company made a business decision to trespass on the property,” says the critical infrastructure lawsuit’s complaint. “The company considered it less expensive to violate the law than to adhere to it.” 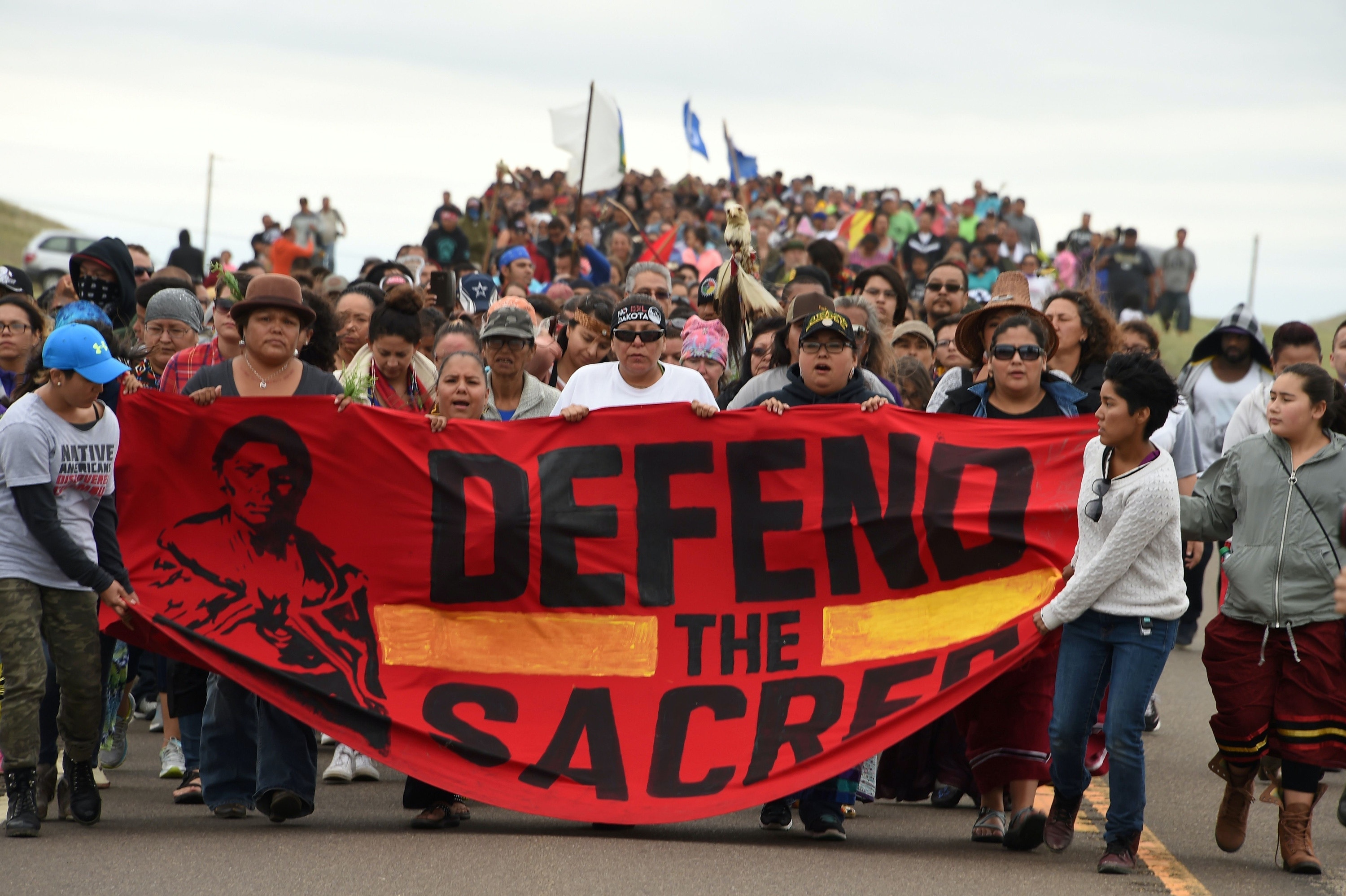 Native American protesters and their supporters demonstrate against construction of the Dakota Access Pipeline near Cannon Ball, North Dakota, on Sept. 4, 2016. The South Dakota law was passed in anticipation of anti-oil pipeline protests similar to those in North Dakota.

South Dakota’s pair of anti-protest laws strays from ALEC’s model legislation. They are meant to represent “the next generation model of funding pipeline construction,” according to the testimony of a lobbyist from Gov. Kristi Noem’s office.

One of the two laws creates new civil penalties for “riot boosting,” which apply to anyone who “directs, advises, encourages, or solicits other persons participating in the riot.” The second law creates a new fund for law enforcement and emergency managers to pay the costs of policing pipeline protests. The riot-boosting penalties go into the fund, along with up to $20 million in additional cash from the pipeline owner.

The law was passed in anticipation of massive protests against the Keystone XL tar sands oil pipeline, which tribes and environmental organizations are in the midst of fighting in court. Noem’s office drafted it in consultation with KXL parent company TransCanada (recently re-named TC Energy), in an effort to manage the burden of expected protest costs. If what happened at Standing Rock is any indication, tribes are likely to bear much of the financial burden of protests. However, the governor did not consult tribal governments.

Pine Ridge Reservation was in the midst of managing devastating floods when Noem signed the anti-protest laws on March 27. In response, tribal chair Julian Bear Runner banned the governor from the reservation, and six anti-pipeline individuals and organizations, including the Indigenous Environmental Network, Sierra Club, Dakota Rural Action, and the NDN Collective, sued Noem, as well as the South Dakota attorney general and the sheriff of Pennington County, who would likely enforce the law.

Like the Louisiana suit, the South Dakota complaint, which was filed by the American Civil Liberties Union, says that the law is unconstitutionally broad and violates First Amendment speech rights. The suit argues that the law “incentivizes the State to sue protesters and those who encourage and advise them in order to compensate for security and other costs incurred by the State and third parties during a protest.”

In legal filings, Gov. Noem and Attorney General Jason Ravnsborg have denied the allegations. Sheriff Kevin Thom is arguing that it should not be his office that defends the constitutionality of a state statute.

The Sierra Club is the largest plaintiff and has historically been cautious in taking part in anti-pipeline activity that involves civil disobedience. “Sierra Club would be hesitant to engage in many of these forms of protected speech if South Dakota’s ‘riot boosting’ laws stand, because it would risk being exposed to civil and criminal liability should authorities or even pipeline companies subjectively decide that the speech somehow contributed to violence,” the suit states. All of the participating organizations have provided training or resources to pipeline opponents likely to peacefully protest the Keystone XL.

“After the world saw the collective power of Indigenous communities coming together at Standing Rock, big oil felt that they had to do something to stop future protests like Standing Rock from happening,” said Falcon, who works with the Indigenous Environmental Network, in addition to organizing in Texas. “We see states stepping in and passing bills like this because they see our power as well, and they see that America is on the brink of climate chaos.”