Jay Inslee Just Dropped the Most Ambitious Climate Plan From a Presidential Candidate. Here’s Who It Targets.

“There’s a complicity in continuing to invest. That’s a different type of responsibility.” 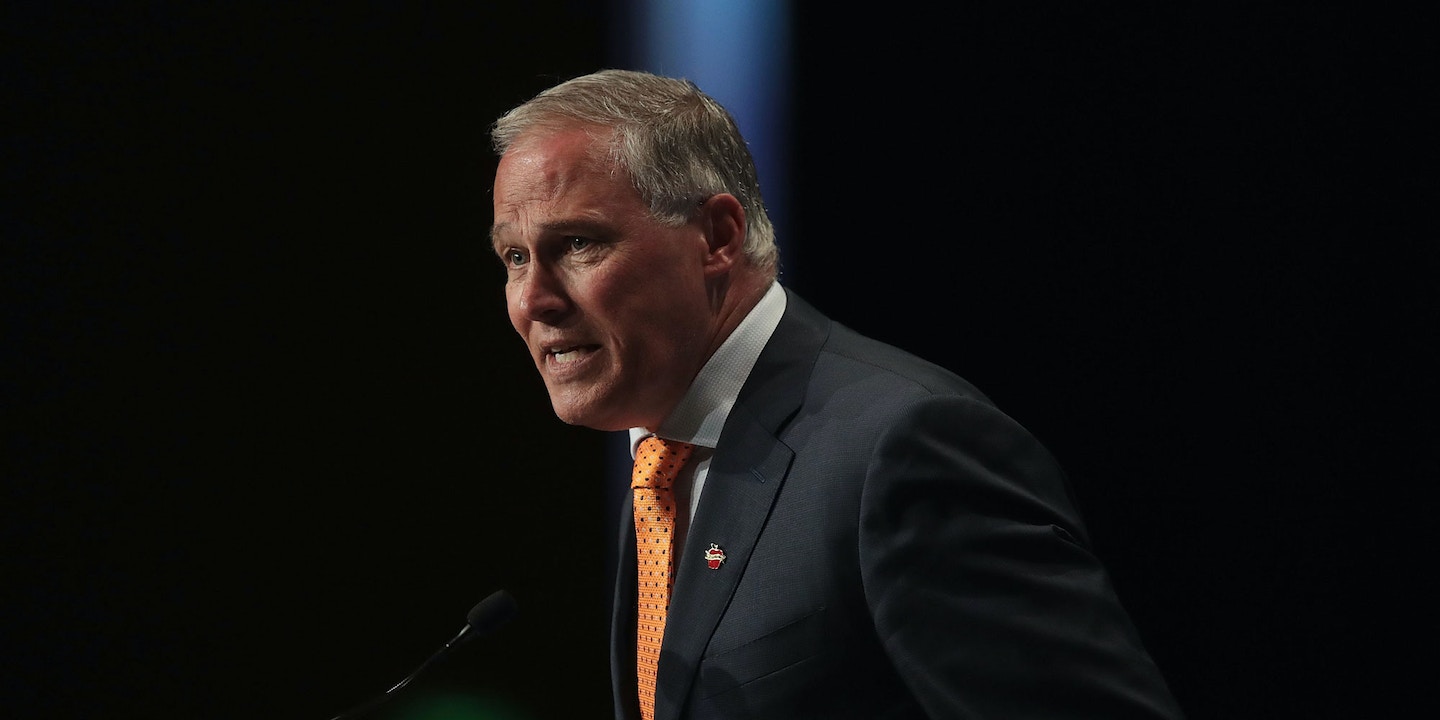 Jay Inslee, a 2020 presidential hopeful, released an expansive plan on Monday that attempts to capture and rein in the full range of what’s propping up the fossil-fuel economy, from big banks, to lax drilling laws, to federal subsidies. The Washington governor is the first candidate to call — and plan explicitly — for phasing out fossil fuel production writ large in the United States, through both legislative and executive actions to ban fracking and to prohibit fossil fuel leases on public lands, among other sweeping changes. The plan also explores possibilities for restricting drilling on nonpublic lands, such as instituting mandatory buffers between drilling operations and populated areas like schools, homes, and hospitals.

Inslee’s “Freedom From Fossil Fuels” plan looks to take on the leadership of fossil fuel companies directly and account for their role in climate and environmental crises, in part by establishing an Office of Environmental Justice within the Department of Justice. “The Inslee Administration will ensure that polluters pay for their actions, and will not hesitate to prosecute them to the fullest extent of the law,” the plan states.

Identifying who those polluters are, and just how much they have to lose, inspired Dario Kenner, a visiting fellow at Anglia Ruskin University in the U.K., to create the Polluter Elite database.

Kenner said his goal for the database is to demonstrate how “these people are blocking you and your grandchildren from having a future. … Do they get to continue profiting and dominating our politics and our chances of survival, or do we stop them?”

Kenner looked at the total emissions for the most carbon-intensive companies based in the U.S. and U.K. — the fossil fuel producers outlined in the Carbon Majors Report on industrial emissions — and then examined those corporations’ annual reports and regulatory filings to work out how much of those emissions various shareholders owned in 2015. Stacked up against most people, the results are stunning.

The average U.S. resident — a shaky category amid rising inequality — emitted about 16 metric tons of carbon dioxide that year, which is high by global standards even among wealthy nations. Annual per capita emissions that year in the U.K. were just around 6 metric tons. To put that in perspective, a round-trip economy-class flight from New York City to London is about 2.1 metric tons of CO2. If you flew first class, it jumps to 6. Accounting for his $145 million worth of shares in Exxon Mobil circa 2015, then-CEO Rex Tillerson was responsible for 52,442 metric tons over the same time period — well over 3,200 times that of the average American.

The database is the first of its kind to attempt to map out the personal emissions share of the world’s worst polluters. A study released by Oxfam during the Paris climate talks found that the richest 10 percent of people in the world are responsible for half of consumption-based carbon emissions, while the poorest 50 percent of people account for just 10 percent. But around the same time, Kenner wanted to more deeply understand who precisely some of the worst offenders were. For that, he wanted a picture that included those individuals’ responsibility for the production of fossil fuels, not just where it gets ignited downstream — a figure he calls investment emissions. Because of differences in regulatory reporting requirements, he wasn’t able to get data for carbon-intensive firms that are privately held, such as Koch Industries. The database’s release coincides with the release of his book, “Carbon Inequality: The Role of the Richest in Climate Change.”

The Gini coefficient, the gold standard inequality metric, paints a picture for the relative disparity between haves and have-nots, measuring inequality in a given place along a scale of zero (perfect equality) to 100 (maximum inequality). But that doesn’t tell us much about the ultrawealthy, or precisely how much wealth the top 0.01 percent, are holding. The Polluter Elite database looks to fill in that picture from the perspective of their carbon content.

Besides Tillerson, who’s ranked third among energy CEOs, other heavy hitters include Chevron head John Watson, whose 0.11 percent share in the company accounts for 77,562 metric ton of CO2, as well as the top executives of Devon Energy and Occidental Petroleum. In the top slot is Glencore CEO Ivan Glasenberg, whose 8 percent of shares in the U.K.-based commodities trading firm is valued at around $1.5 billion and a whopping 2 million metric tons of CO2.

While Kenner provided the list of CEOs to give readers a comprehensible reference point — people generally understand what a CEO’s role in a company entails — Kenner is wary of treating the database as a ranking exercise. The total top five or 10 polluters would be a different list of people who hold a range of positions and decision-making authority at various companies, ranked relative to those firms’ sizes. Kenner said his main aim isn’t to compare the “polluter elite” to one another, but to instead compare them and their carbon footprints to ordinary people.

People who own hundreds of millions of dollars worth of shares in fossil fuel companies are also, of course, fabulously wealthy and leading fabulously carbon-intensive lifestyles, something Kenner’s figures don’t add to the pile, but he hopes that will be on people’s minds as they look through the database. What’s also key, he said, is to get a sense for just how much political weight these companies expend to keep the energy status quo going. Many of the heaviest hitters are also members of trade associations like the American Petroleum Institute, which aggressively lobbies U.S. elected officials for regulatory rollbacks and fossil fuel subsidies. And they give generously, through corporate PACs and personal donations, to politicians who will look out for their interests. Of course, the amount of extra emissions those donations are responsible for is difficult to quantify. Kenner also includes information, linking to the International Consortium of Investigative Journalists reporting on the Panama Papers, about each individual’s use of offshore tax havens, where applicable.

It is well established that the top brass of the fossil fuel industry wields enormous political power, Kenner says, and his project builds off the already existing research on that relationship. “What I’ve done is intentionally gone the next level down, from a faceless company to the individuals running it,” he told me, “to try and visibilize and make more tangible to people who the people are that are really contributing to climate change through their decisions.”

As fossil fuel companies and their trade associations continue to cozy up to national delegations  at U.N. climate talks in order to shape policy made there, the report should cast doubt on the idea that they’re negotiating in good faith. “We really need to destabilize these companies while simultaneously increasing renewable energy. They will keep on coming back and back like zombies to resist progress,” Kenner said. “They’re hugely profitable and they’re never going to stop because fossil fuels are their lifeblood. … They will never be part of a transition to a world in which they do not exist.” Through analyzing participant lists from the last quarter-century of U.N. climate talks, a study from the Climate Investigations Center obtained by Agence France-Presse last week found that teams of representatives sent by fossil fuel interests have often outnumbered many national delegations; in all, these groups have sent 6,400 of their representatives to those gatherings since 1994. The U.N. Framework Convention on Climate Change, the body that convenes these representatives, currently has no conflict of interest policy to protect against industry influence, a situation that climate justice groups have been attempting to remedy at talks happening in Germany this week.

That the difference in influence and emissions between the polluter elite and the rest of us are so drastically different is what make Kenner skeptical that per capita emissions, a standard feature of carbon accounting, are a useful metric at all. At least, he says, they can’t be examined in a vacuum. “Per capita emissions linked to consumption are not good enough anymore. When somebody who’s richer leads such a more high-carbon lifestyle than someone who is poorer, it becomes meaningless to have an average carbon footprint,” he said. “I think that work has been very valuable, but we need to go deeper. We need to go into the actual differences within countries, and the reason for that is because there’s such high inequality.”

Even at the city level, average figures can mask vast differences, sometimes on a block-by-block basis. For one 2016 project, sociologist Daniel Aldana Cohen and researcher Kevin Ummel mapped out the relative carbon content of different New York City neighborhoods. Perhaps unsurprisingly, well-heeled Upper East Siders —neighbors to Fox News and David Koch — spewed far more carbon into the atmosphere than nearby working-class residents of East Williamsburg and Crown Heights. And while the rich are more prolific polluters than the poor, part of what Kenner hopes to highlight in his book and project is that consumption-based emissions have more to do with structural factors than individual choice.

“The first thing to really look at is who profits from what,” he argued. “Clearly the people who are running the companies who sell [fossil fuels] profit from a transportation system which is based on them. They have an interest in it. Does the average citizen profit from that transportation system? Unless they hold shares in that company, probably not. And that person doesn’t have much influence over whether the buses are electric or diesel.”

Focusing in on the biggest contributors to climate change also raises larger questions about how emissions totals are compiled, especially as rising emissions in India, China, and other developing countries become a talking point for an American right eager to discourage climate policy and proposals like a Green New Deal in the U.S. “If there’s a U.S. citizen sitting in New York profiting from extraction and gas flaring in Nigeria, those activities counts towards Nigeria’s national emissions. But surely, if the person profiting from it is sitting in New York and is a U.S. citizen, then they hold more responsibility than the average Nigerian,” Kenner told The Intercept.

It’s not just fossil fuel executives with bloated investment emissions, either. Casino magnate and longtime Donald Trump ally Carl Icahn, who in 2015 was a major private investor in Chesapeake Energy, owned shares worth 504,428 tons of carbon dioxide (he’s since sold off those holdings). Several of the top polluters listed in the database also hold influential positions at financial institutions like Blackrock and JPMorgan Chase, which are major investors in fossil fuel projects. “There are different levels of responsibility. An asset manager of a company like Blackrock isn’t involved in the day-to-day operations of a company like Exxon Mobil,” Kenner said. “Having said that, when they invest in Exxon Mobil, they know what Exxon Mobil does. There’s a complicity in continuing to invest. That’s a different type of responsibility.”