Kellyanne Conway seems blissfully unaware that her own ancestors were once the target of the sort of nativist hatred that her boss is currently ginning up. 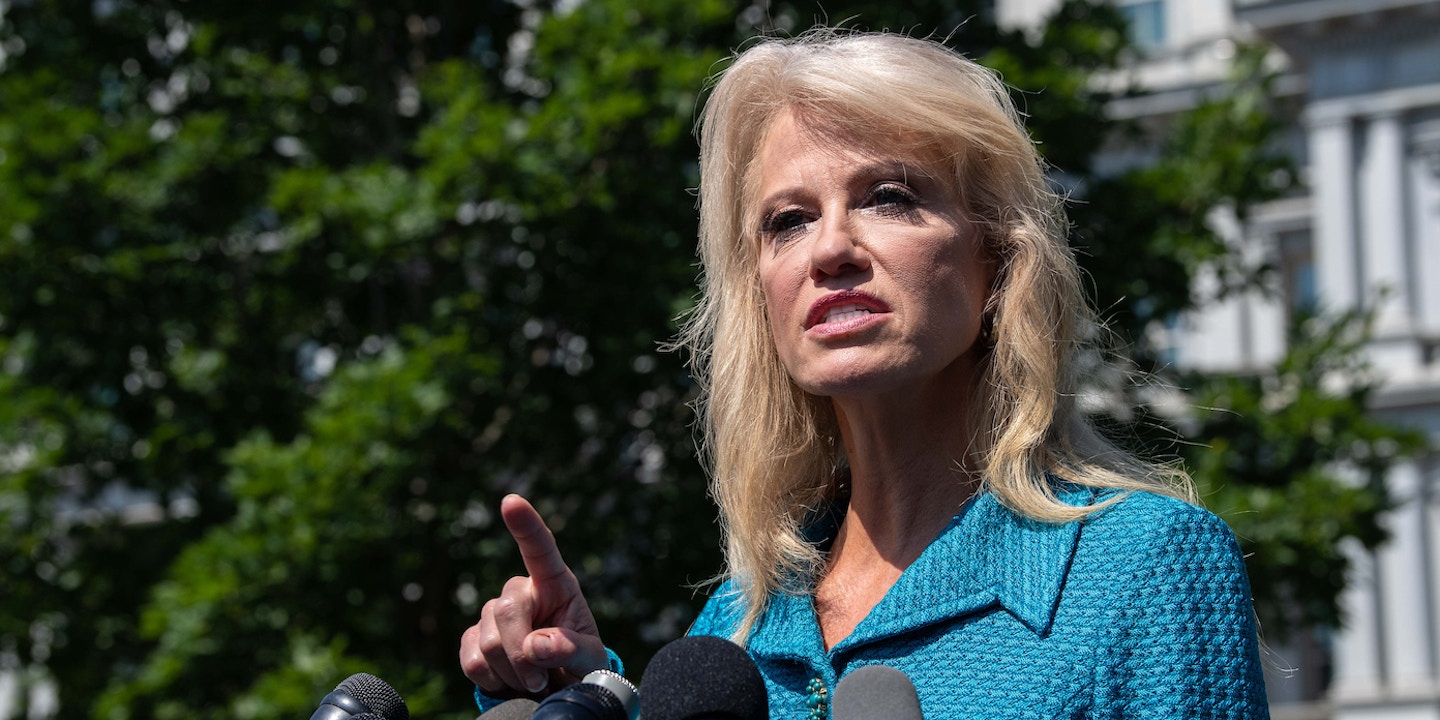 Kellyanne Conway’s strange, unsettling request — that a journalist who questioned the president’s call for his political enemies to be deported to their ancestral homelands should reveal his own ethnicity — was properly denounced as repulsive on Tuesday.

But there was another element of the exchange, and of Conway’s attempt to cast Donald Trump’s fixation on the ethnic origins of his critics as perfectly ordinary, that deserves more attention.

“We are all from somewhere else ‘originally,'” Conway wrote later on Twitter, by way of explanation. “I asked the question to answer the question and volunteered my own ethnicity: Italian and Irish.”

For someone of that heritage, Conway displays a strange lack of awareness that her own ancestors were once excluded from the nativist definition of who belongs in America — and who is entitled to citizenship as a right, not a privilege.

What’s more, anyone working for Trump has reason to be aware of just how recently American citizens from Irish and Italian families were viewed with hatred and suspicion by native-born, white Protestants.

That’s because the president’s father, Fred Trump, was one of seven men arrested in 1927 at a Memorial Day parade in Queens, where 1,000 robed members of the Ku Klux Klan rioted when the Irish-American-led police force tried to prevent them from marching. The arrest was documented in the New York Times two day later, in an account that gave Fred Trump’s name and home address, as the website Boing Boing discovered in 2015. Although the Klan is better known now for its long campaign of terrorism and murder directed at African-Americans, a century ago, its members were also animated by the perceived threat to white, Protestant America from an influx of Irish and Italian Catholics, suspected of harboring secret dual loyalties to an alien faith.

In New York City, the Klan viewed the police department — which was more than 50 percent Irish at the start of the 20th century — as the standing army of the growing Catholic immigrant community.

While the Times report noted that the charges against Fred Trump were dropped, and it is unclear whether he was a participant or a bystander, his name also appeared in contemporary reports from three other local newspapers, unearthed by Vice News, as one of the seven men detained after skirmishes that day between 100 police officers and the “berobed” Klansmen. 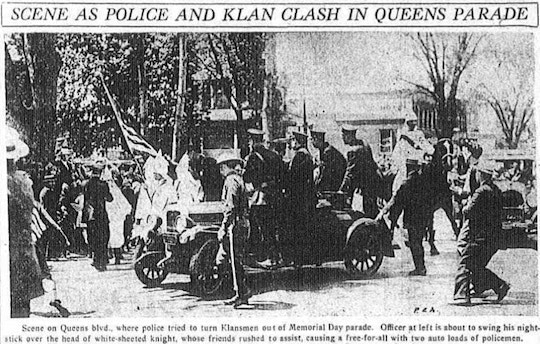 The now-defunct Brooklyn Daily Star reported that Fred Trump was “dismissed on a charge of refusing to disperse from a parade when ordered to do so.”

When Donald Trump was asked about this incident by Jason Horowitz of the New York Times in 2015, he gave the self-contradictory answer: “It never happened, and they said there were no charges, no nothing. It’s unfair to mention it, to be honest, because there were no charges.”

The names of the police officers cited in the contemporary Times report on the riot underscore that the New York Police Department was by then an established center of Irish-American power. According to the report, the police commissioner, Joseph Warren — whose father was born in Ireland — had been alerted that the Klansmen intended to march in the parade by one Patrick Scanlan, the editor of a Brooklyn Catholic weekly called The Tablet.

Two of the officers who played a central role in the events also had typically Irish Catholic names: Deputy Chief Inspector Thomas Kelly of Queens, who determined that the Klansman had broken an informal understanding with the police not to wear robes and hoods, and Patrolman William O’Neill, who was knocked down and kicked by the marchers.

The Times report also included the full text of a flyer passed around Jamaica, Queens, after the riot, “apparently giving the Klan’s side of the matter.” Under the headline, “Americans Assaulted by Roman Catholic Police of New York City!” the Klan flyer began, “Native-born Protestant Americans clubbed and beaten when they exercise their rights in the country of their birth.” The year after that riot, the Klan played a major role in opposing New York’s governor, Al Smith, a son of Irish and Italian immigrants, when he became the first Catholic to be nominated for the presidency by a major party, running as the Democratic candidate against Herbert Hoover.

As the historian Robert Slayton explained in a 2011 blog post for the New York Times, anti-Catholic bigotry, stirred up by the Klan, dominated the 1928 presidential election campaign, leading to Smith’s defeat in a landslide.

The school board of Daytona Beach, Fla., sent a note home with every student. It read simply: “We must prevent the election of Alfred E. Smith to the Presidency. If he is elected President, you will not be allowed to have or read a Bible.” Fliers informed voters that if Smith took the White House, all Protestant marriages would be annulled, their offspring rendered illegitimate on the spot.

Opponents blanketed the country with photos of the recently completed Holland Tunnel, the caption stating that this was the secret passage being built between Rome and Washington, to transport the pope to his new abode. Countless copies of a small cartoon appeared on lampposts and mailboxes everywhere. Titled “Cabinet Meeting — If Al Were President,” it showed the cabinet room, with the pope seated at the head of the table, surrounded by priests and bishops. Over in the corner was Al Smith, dressed in a bellboy’s uniform, carrying a serving platter, on top of which was a jug of whiskey. Summing up, the minister of the largest Baptist congregation in Oklahoma City announced, “If you vote for Al Smith you’re voting against Christ and you’ll all be damned.”

The Ku Klux Klan became actively involved in preventing a Catholic from ever getting near the White House, going all out to defeat Smith. One Klan leader mailed thousands of postcards after Democrats nominated the New Yorker, stating firmly, “We now face the darkest hour in American history. In a convention ruled by political Romanism, anti-Christ has won.” A Klan colleague in remote North Manchester, Ind., warned his audience, in booming tones, of the imminent arrival of the pope: “He may even be on the northbound train tomorrow! He may! He may! Be warned! America is for Americans! Watch the trains!” When I interviewed Hugh L. Carey, only the second Roman Catholic elected governor of New York, for my Smith biography, he remembered Klan parades in Hicksville when he was 9 years old and how frightened he was, because “there was a real anti-Catholic sentiment.”

Kellyanne Conway seems unable, or unwilling, to hear the echoes of this sort of rhetoric — used to vilify Irish and Italian Catholics during the lifetimes of her Irish and Italian grandparents — in the words Trump uses now to attack two Muslim congresswomen, from Somali and Palestinian immigrant families, as undeserving of American citizenship. But those echoes are there, and the rest of us can hear them.