While critics wondered if Beto O’Rourke was too progressive for Texas, Hegar remained ambiguous on most policy, including gun violence, in her 2018 House campaign. Beto O’Rourke has surged back into the national spotlight in the wake of a massacre in his hometown of El Paso, Texas, prompting calls for him to abandon his flagging presidential campaign and instead challenge Sen. John Cornyn, a Republican whose fearmongering about the fading white population in Texas was reflected in the shooter’s political manifesto.

O’Rourke came within 2.6 percentage points of Texas Sen. Ted Cruz in 2018 while running on an unapologetically progressive platform, unusual in a statewide race. Having failed to recruit to O’Rourke to run, Senate Minority Leader Chuck Schumer has instead leaned on M.J. Hegar, who lost a 2018 House race in a conservative district by 3 percentage points.

While critics wondered if O’Rourke was too progressive for Texas, Hegar remained ambiguous on most policy, including gun violence, in her 2018 campaign. Refinery29 reached out to Hegar after the Parkland massacre. “She says gun violence is the ‘greatest threat’ to the Second Amendment and that she is ‘passionately committed’ to legislating away the gun violence epidemic.” Refinery29 reported. “It’s a vague stance that looks to toe the line between competing allegiances.”

When she was asked about gun policy at a campaign event months after, Hegar replied, “You’ll have to take mine first,” noting she owns five guns.

After the El Paso shooting, a spokesperson for Hegar offered the most detailed stance from Hegar on gun control yet: “MJ has always and continues to believe that immediate action needs to be taken to stop senseless gun violence, which is why she supports legislation to institute universal background checks, closing the gun show loophole, passing ‘Red Flag’ laws limiting access to firearms for domestic abusers, and giving the CDC much needed funding to study gun violence.” 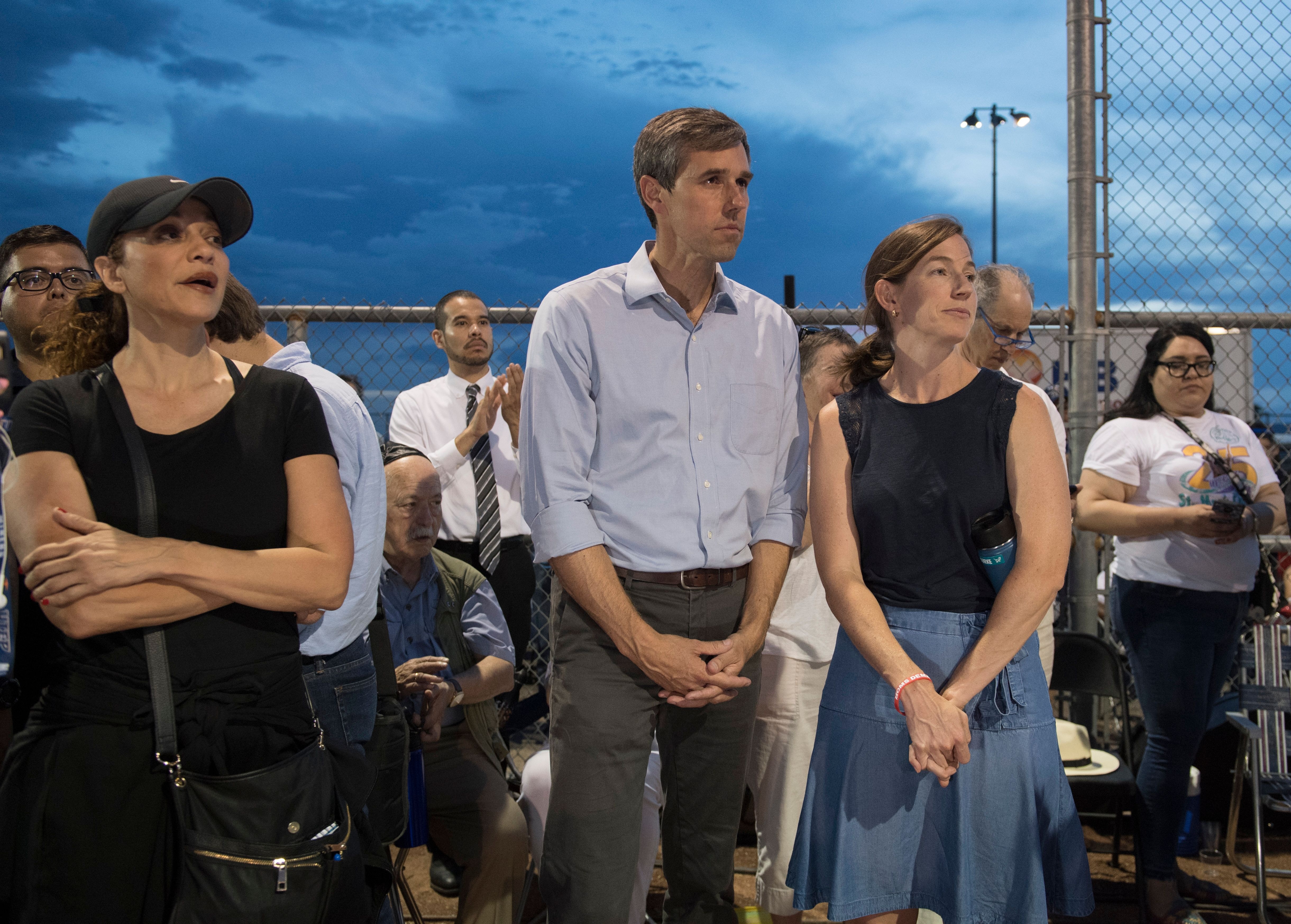 Democratic presidential candidate and former U.S. Representative for Texas’s 16th Congressional District Beto O’Rourke, center, waits to speak to the crowd, alongside his wife Amy Hoover Sanders, right, during a vigil on Aug. 4, 2019, a day after a shooting at a Walmart in El Paso, Texas, left at least 20 people dead.

O’Rourke, on the other hand, was more forceful in his calls for reform on Saturday at the American Federation of State, County and Municipal Employees forum in Las Vegas. “Keep that shit on the battlefield; do not bring it into our communities,” he said. “I don’t want to see it in our malls or in our schools or in our churches or in our synagogues.” His 2018 platform includes universal background checks; a ban on the sale of military-style weapons; closing the gun show, online, and boyfriend loopholes; and support for federal research on gun violence.

When asked by a reporter on Sunday whether there was anything President Donald Trump could do to “make this any better,” O’Rourke criticized the mainstream media for treating racism as a matter of debate. “What do you think? You know the shit he’s been saying. He’s been calling Mexican immigrants rapists and criminals. I don’t know, like, members of the press, what the fuck?” O’Rourke said.

I didn’t get video, but here’s audio of the question and Beto O’Rourke’s answer. This came after an emotional vigil in El Paso, as O’Rourke circled behind a building looking for his wife. pic.twitter.com/VBk8xoE1lz

When O’Rourke, a former congressman, ran for Senate in 2017, he came closer to winning a statewide seat than any Democrat had in two decades, due in large part to his campaign’s massive field operation, turnout strategy, and outsider appeal. He embraced Medicare for All, and though his voting record in the House was much more conservative than many of his Democratic colleagues, political observers wondered whether O’Rourke was too progressive for Texas throughout the entire campaign.

Though he ultimately lost to incumbent Cruz, the momentum and national hype surrounding his campaign helped Democrats win two U.S. House seats and flip more than a dozen seats in the state legislature. O’Rourke also raised a record-breaking $74 million, more than any candidate to ever run for U.S. Senate, almost entirely from small donors. And he could have jumped in to take on Cornyn, entering the race with an unprecedented grassroots machine and his newfound social media stardom.

Instead, he decided to run for president, and shortly after launching his campaign, his influence began to wane. Going into the second round of Democratic debates, O’Rourke was polling at around 2 percent, and his campaign raised $3.6 million in the second quarter — less than half of its first quarter fundraising haul. And according to a poll by the Houston Chronicle, about 60 percent of Democratic voters want O’Rourke to run for Senate again, instead. In Texas, the filing deadline is December 9.

But O’Rourke continues to defend his presidential run, and Hegar, who came within 3 percentage points of unseating a Republican incumbent in a GOP-leaning district last year, has emerged as one of the leading Democratic challengers to Cornyn.

Hegar hasn’t been a committed Democrat until recently and has publicly expressed libertarian views. She voted in the 2016 Republican primary, according to voting records, and previously said, in a tweet that has now been deleted, that she “proudly” voted for Hillary Clinton in the general election. Screenshots obtained by The Intercept show that Hegar shared posts from Gary Johnson’s presidential campaign and changed her profile picture to a photo of the Gadsden flag, which is associated with libertarianism.

Facebook posts by M.J. Hegar, which appear to have been deleted or hidden.

Screenshots: Provided to The Intercept

When Hegar announced her run in July 2017 for U.S. representative, she was immediately backed by the Blue Dog PAC and With Honor, the Jeff Bezos-funded Super PAC that backs military veterans.

So far, Hegar’s campaign for Senate, like her campaign for House last year, has revolved around her military experience. She remains vague on specific policy issues: Although she has cited health care as a top priority, she hasn’t come out in favor of a specific policy and previously told reporters she doesn’t support a single-payer plan like Medicare for All. At a campaign event in Dallas in July, she came out against the Green New Deal.

When asked by The Intercept last week for details on Hegar’s policy stances, a spokesperson for the campaign replied: “Are you planning to ask this question to all the candidates in the Texas Senate Dem primary?” The campaign then followed up saying Hegar supports “creating a Medicare buy-in option for all those who want it, making the much-needed fixes to the Affordable Care Act, and ensuring universal coverage for children” and “aggressive goals for the expansion of renewable energy and reclaiming our leadership in the world by rejoining the Paris Climate Agreement.”

Sema Hernandez, a member of the Democratic Socialists of America who was the runner-up to O’Rourke in the 2018 primary, is one of the five other candidates hoping to face Cornyn. Hernandez, a progressive activist, supports Medicare for All, tuition-free college, and marijuana legalization.

As Hegar told the Texas Tribune: “I don’t support the type of policies like the Green New Deal because I feel like so often we are attaching so many things to the key thing we’re trying to accomplish that it politicizes it and makes it if you disagree with it, you’re a climate change denier. Or if you agree with it, then you’re a socialist.”