The change to Kashmir’s status as an autonomous state, which both India and Pakistan lay claim to, comes after an unexpected lockdown in the province. 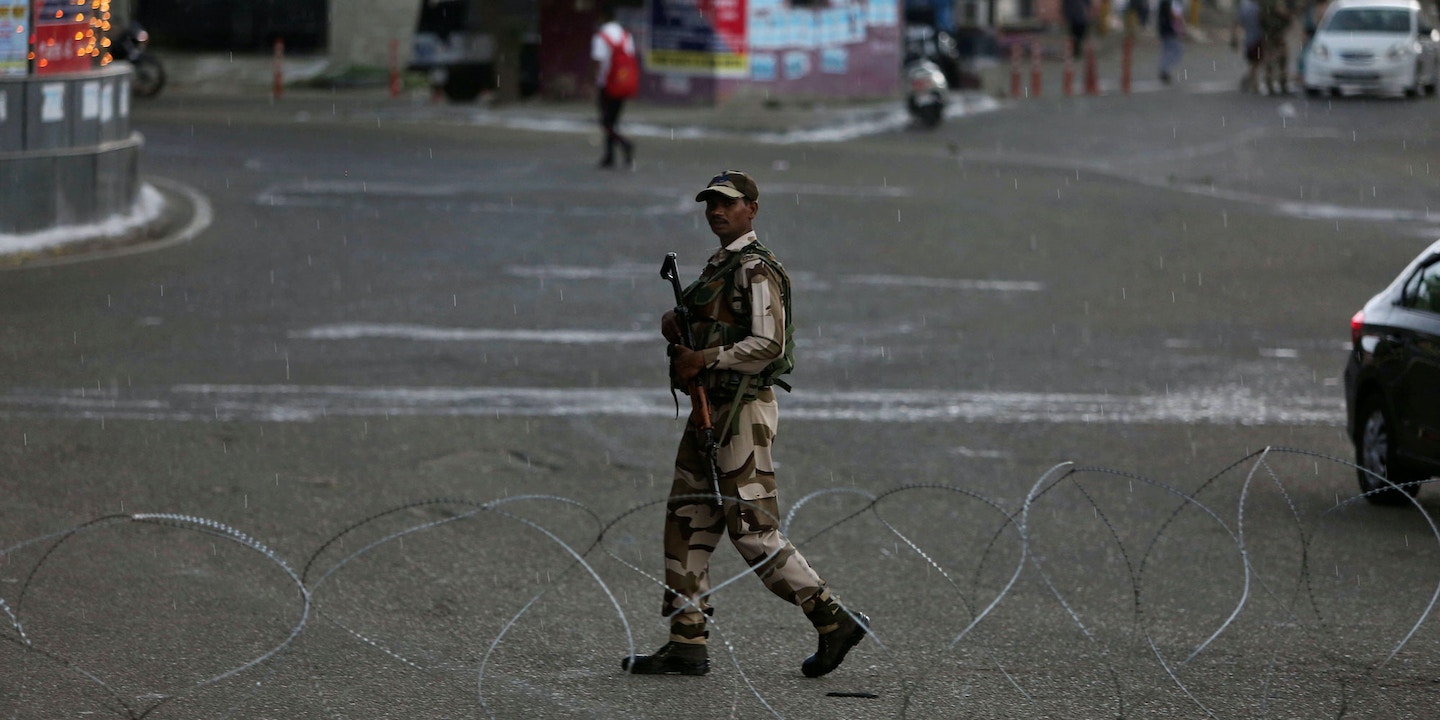 Early Monday morning, the Indian government announced a change to its constitution, revoking the autonomy of the disputed northern state of Jammu and Kashmir and potentially setting the stage for a major new conflict. The change opens the door to a situation similar to Chinese policy in Tibet and Xinjiang and Israeli policy in the West Bank, allowing the Indian government to move huge numbers of settlers into Kashmir, the country’s only Muslim-majority region, thereby forcibly transforming its demographics.

The decision to revoke the statute, Article 370, comes amid an unexpected crackdown by the Indian government on the Indian-controlled half of the province, over which neighboring Pakistan also lays claim. Over the last several days, prominent Kashmiri political leaders and activists — including many seen as supportive of Indian government rule — have been detained or placed under house arrest. Thousands of Indian soldiers and paramilitaries have been deployed to the region, adding to the whopping 600,000 already stationed in a place widely referred to as the most militarized region on earth.

The abrupt escalation caused widespread alarm. In addition to the military deployments and arrests, a curfew has been imposed on civilian movements. Internet and mobile phone access for Kashmiris has been completely cut off. Tourists have been ordered out of the state, and the Indian government has alleged the existence of terror threats against religious pilgrims, who are in the province to visit the famous Amarnath shrine complex. Taken together, the moves seem to be a clear preparation for possible violence.

“The government would not have taken all these steps if they didn’t have a big plan in the works.”

“The recent deployments of troops and security measures have sown a lot of fear and panic among people in Kashmir,” said Mohamad Junaid, an assistant professor of anthropology at Massachusetts College of Liberal Arts and an expert on political movements in Kashmir. “The government would not have taken all these steps if they didn’t have a big plan in the works.”

During a recent visit from Pakistani Prime Minister Imran Khan to the United States, Donald Trump offered to mediate the Kashmir conflict between India and Pakistan, which has its roots in the 1947 British partition of the Indian subcontinent. Kashmir’s territorial status has been unclear ever since, and its neighboring countries have fought three major wars to claim or hold the territory. India has promised the Kashmiris who live under its control autonomy in exchange for accepting its rule, but that autonomy has slowly been whittled away, giving rise to an armed separatist movement — and culminating now in the revocation of Article 370.

Trump claimed that Indian Prime Minister Narendra Modi was the one to propose U.S. mediation of the conflict, a claim that Indian officials responded to with irate denials. The Indian government has long resisted the international community’s attempt to become involved in the dispute. Trump’s offer seems to have helped precipitate the military escalation now under way, which appears aimed at ending Kashmir’s remaining autonomy within India.

The revocation of Article 370 was an expected result of the recent crackdown. Modi has repeatedly promised to take such a step despite the likely backlash from Kashmiris, most of whom either nurse separatist sentiments or wish to maintain autonomy from the rest of India. A particular clause of that law, known as article 35A, gives the Kashmiri government the ability to determine who is a permanent resident of the state. The revocation of both 370 and 35A opens the door to India’s population of 1.2 billion to begin moving into Kashmir en masse, a development likely to dangerously escalate a conflict that is at its core over territorial control.

“For Kashmiris, it was the last thing they were holding onto before a complete and utter ethnic cleansing could take place,” wrote Hafsa Kanjwal, an assistant professor of South Asian history at Lafayette College, in a Facebook post about the revocation of article 35A. “But this has changed now. The worst nightmare that Kashmiris could have imagined in their already existing nightmare can take place now. Indians can buy property and land in Kashmir, and drive out the local population.”

In addition to further strife for long-suffering Kashmiris, there is another looming threat: a possible war between India and Pakistan. In tandem with military deployments, there has been increased shelling on the India-Pakistan border in recent days, and the Indian Air Force has also been placed on alert.

The two nuclear powers nearly went to war this past February, after a rare suicide bombing in Kashmir blamed on Pakistani-backed militants killed dozens of Indian soldiers near the town of Pulwama. Weeks of tit-for-tat attacks between India and Pakistan ensued, raising the real possibility of a full-blown war between the two countries. An outbreak of violence on the border could take them down that road once more.

“The Indian government may be planning to revoke article 35A of the constitution, but it also may be preparing for an incursion into the Pakistani-controlled side of Kashmir,” said Junaid on Sunday night, hours before India announced the constitutional change. “The possibility of militarily ‘taking back’ the rest of Kashmir has repeatedly been raised by Modi and in published BJP manifestos. They would like to keep any conflict at a conventional level, but one can only imagine what might happen if Pakistan begins to lose significant territory.”

In recent months, there have been signs of serious political shifts in South Asia that might also suggest why India is escalating in Kashmir now. The United States is currently on the verge of concluding a peace deal in Afghanistan that will likely see the Taliban return to power on some level. Pakistan has been playing a key role in these talks and is likely to benefit from such an outcome. India, meanwhile, has invested heavily in Afghan parties who are likely to lose power in the agreement.

“There was a time before Modi when there might have been some pushback from Indian liberals over these types of policies in Kashmir.”

All this also occurs against a backdrop of a slowing economy and rising nationalism within India. Taking a hard line on Kashmir offers Modi a chance to burnish his populist credentials. Modi’s May reelection was widely seen as representing a definitive shift in Indian politics toward the religious right, a portentous change in a country that has long taken pride in its secular democratic tradition.

“There was a time before Modi when there might have been some pushback from Indian liberals over these types of policies in Kashmir. That space has shrunk in recent years,” said Kanjwal. “Now even those Indians who were adamant about Kashmir being a part of India, but might have been willing to discuss some level of autonomy or express concern for human rights, are at risk of being branded as ‘anti-nationals’ under the current right-wing nationalist regime.”

The revocation of article 35A, Kanjwal said, will almost certainly lead to a new and worse period of violence in the troubled province.

“People are likely to come out into the streets regardless of the curfew, and they will undoubtedly be met with bullets from the Indian military,” she said. “It is very, very scary what could happen.”