It’s alarming that only someone given to wild flights of irrationality believes that America can hear the truth about itself and respond rationally. 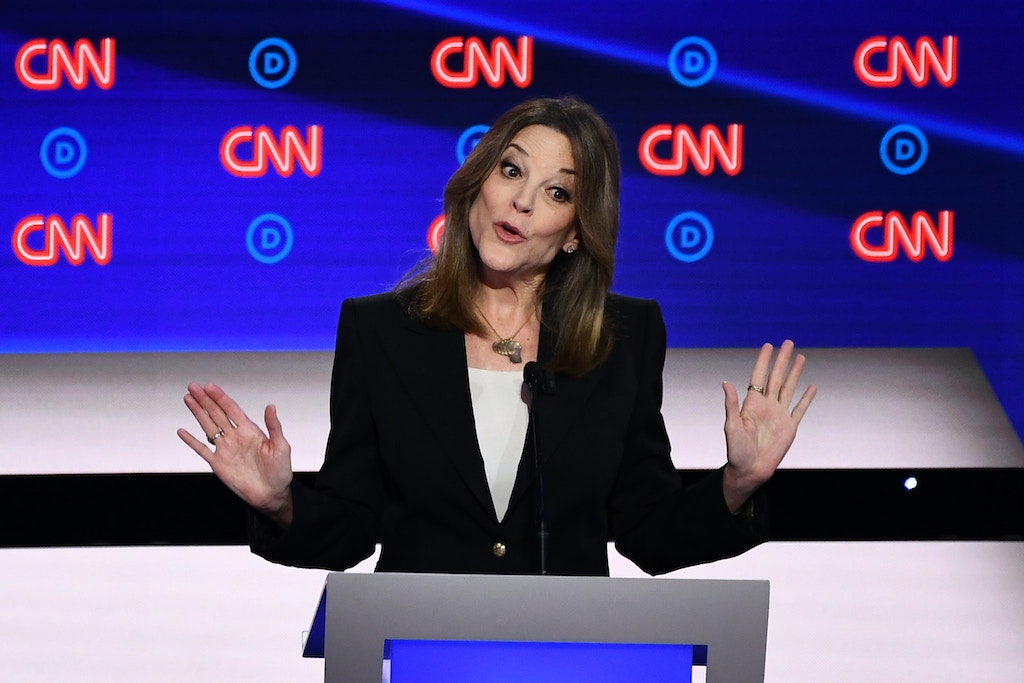 Author Marianne Williamson speaks during the second Democratic primary debate of the 2020 presidential campaign season, hosted by CNN at the Fox Theatre in Detroit on July 30, 2019.

Marianne Williamson has been a surprisingly valuable voice in the 2019 Democratic presidential debates. She’s been radical in the real meaning of the word, calling on America to treat not just our tangle of symptoms but the underlying diseases. Even better, she understands that high-level political leadership is not about whose policies will elicit the best graphs from the Congressional Budget Office but rather the murky alchemy of human emotion. And she’s clearly connecting, since on Tuesday night she was the most searched candidate on Google in 49 states.

This is all bad news.

The problem is not what Williamson, the author of four bestselling New Age self-help books, is saying. It’s not even that she’s the person saying it. It’s that she was the only Democrat on the stage saying it — which suggests America’s problems have grown so large we can’t face them.

Williamson is right about so much. She also has a history of being extremely wrong about a lot else. To see what’s going on here requires an understanding of both parts.

Let’s start with the bad part: Williamson has flirted with the anti-vaccination movement, calling mandatory vaccinations for children “draconian” and “Orwellian.” She’s said clinical depression is a “scam” and insinuated that antidepressants have caused several celebrities to kill themselves. In her first book, 1992’s “A Return to Love,” she wrote that “cancer and AIDS and other physical illnesses are physical manifestations of a psychic scream” and that the reason any medications ever work “comes from our belief” that they will. She’s walked back many of her most peculiar assertions, but nothing can change the fact that “A Return to Love” is itself a celebration of an earlier book called “A Course in Miracles,” whose author claimed it was directly dictated to her by Jesus.

But then there’s the good part. In Tuesday’s debate, when Williamson had the chance to talk about health care, she didn’t flog the details of her website’s plan, which actually involves a public insurance option rather than Medicare for All. Nevertheless, she managed to go further than even Bernie Sanders does:

Just hearing this obvious truth on national television was a relief. Science does genuinely show that many of America’s leading killers, like heart disease, strokes, and diabetes, are diseases of corporate civilization that would largely evaporate if we stopped eating animal products. The USDA food pyramid from third grade looks the way it does not because that’s what human beings should eat, but because giant dairy corporations want everyone to consume 27 daily servings of cheese. Meanwhile, plastics and their byproducts have soaked into every nook and cranny of earth, including our bodies and the bodies of animals, and it’s killing us. Chronic economic stress does in fact worsen chronic disease. Every word Williamson said was correct.

Even better was Williamson’s statement in the first debate about the Trump administration’s attack on immigrants. She didn’t just call it “a crime,” she said, “I haven’t heard anybody on this stage who has talked about American foreign policy in Latin America.” More and more people have been coming to the U.S. from Central America because we ripped the region to shreds during the 1980s, and their countries still haven’t recovered. In the broader world, many people know this. Inside TV studios, this basic reality seems not to exist, yet no other candidate tries to change that.

But the most startling part of Williamson’s performance was her explanation on Tuesday of her support for reparations for slavery. CNN’s Don Lemon spoke of reparations as “financial assistance.” No, she responded, this was wrong: Reparations would not be financial assistance, but “payment of a debt that is owed.” And the point of reparations is not just money, but ending the price we pay for avoiding reality. “There is an injustice that continues to form a toxicity underneath the surface, an emotional turbulence,” she said, but “people heal when there’s some deep truth-telling.”

It was here that Williamson demonstrated most clearly that she understands what standard-issue elected Democrats don’t: that politics isn’t about what we call “politics.” It’s not ultimately about taxes, or budgets, or immigration, or regulations. It’s about hope and fear, and love and hate.

Donald Trump definitely knows this — in fact, it may be the only thing he knows about politics. And it was enough to get him elected president. He may not understand what she means when she says that “only love” can beat him in 2020, but he surely intuitively understands that to win he needs to nurture the opposite, what Williamson called the “dark psychic force of collectivized hatred.”

It’s difficult now to imagine any other Democrats speaking like that. But that hasn’t always been true: In one of Franklin D. Roosevelt’s most famous speeches, just before the 1936 election, he sounded something like Williamson. His administration, Roosevelt said, had “had to struggle with the old enemies of peace — business and financial monopoly, speculation, reckless banking. … They are unanimous in their hate for me — and I welcome their hatred.” But he did not want to respond with hatred. Instead, he said, “We need to say with the Prophet: ‘What doth the Lord require of thee — but to do justly, to love mercy and to walk humbly with thy God.’ That is why the recovery we seek, the recovery we are winning, is more than economic. In it are included justice and love and humility.”

All of this was purposeful on Roosevelt’s part. Before he was first elected, he explained, “The presidency is not merely an administrative office. That’s the least of it. It is more than an engineering job, efficient or inefficient. It is preeminently a place of moral leadership.”

This stance helped make Roosevelt the most successful Democratic president in history. Yet today’s Democrats won’t make use of that heritage. Why?

Emotion only works when it rings true, when a speaker is describing reality as he or she genuinely believes it to be, without equivocation. Many of the Democrats in the race can’t tell the truth because their main quarrel with the status quo is that they’re not president. They could undoubtedly give a compelling speech on this subject, but on all others they come across as leaden and flat.

A small number of candidates, such as Sanders and Elizabeth Warren, actually do want drastic change. If we could capture them and force them to talk, they would likely say they share much of Williamson’s perspective on America’s predicament — but that they don’t talk about it that way because Americans can’t face the amount of change we need. Countries are like people: The fewer problems they have, the more willing they are to change. Meanwhile, those who need to drastically alter course find the concept terrifying and will do anything to avoid it. And America’s problems are gigantic.

More than 30 years ago in 1988, Ivan Stang made a prediction. Stang was co-creator of the Church of the SubGenius, an elaborate parody of cultism. “The kooks are our future,” Stang wrote about America’s growing retreat from reality. “The years to come promise incredibly fertile fields for the sowing of superstition and pseudoscience; they’ll grow so fast we’ll wonder if there had ever really been an Age of Reason. … It shall be a rich harvest for industrious Skull Farmers of every creed.”

Williamson is one of America’s more benign Skull Farmers. But it’s alarming that only someone given to wild flights of irrationality believes that our country can hear the truth about itself — and respond rationally.