“Succession” isn’t directly about the Murdochs and Fox. It’s about a class of super-wealthy individuals who are manifestly unfit to rule. If you had to sum up decades of financial dystopia in America, you could go with the phrase “Money wins.” The accumulation of insane amounts of wealth by the 1 percent has flattened in its path everything else: the interests of ordinary people and the planet, as well as the notion that fairness should be a social compact rather than a sucker’s delusion.

The phrase comes from one of the most scathing accounts of our economically twisted times: the newest season of HBO’s “Succession,” which is both a drama and comedy about a billionaire family based loosely on Rupert Murdoch and his children. The patriarch of the fictional family in “Succession” is Logan Roy, who has built a media and entertainment empire from scratch, with a cable network at its heart that is a dead ringer for Fox News. In the new season of the show, which starts on Sunday, Logan is surrounded by his heirs and assorted hangers-on as he celebrates another business triumph by chillingly proclaiming, “Money wins. Here’s to us!”

The members of the Roy family are fictions but in their evident unfitness to rule, in their manifest sadomasochism, they are true-to-life.

This season of “Succession,” its second, is being rightly praised as pretty much the best thing to watch at the moment. The show is a genre-bending mashup of “Veep,” “King Lear,” and “Empire.” As critics have noted, the writing and acting are stellar, to the extent that even supporting actors have unofficial fan clubs. It’s impossible, for instance, to not be transfixed by the hilariously instrumental relationship between the secondary characters played by Matthew Macfadyen and Nicholas Braun (“Back off, this is executive-level business!” Macfadyen screams to his inferiors during a madcap scene in which he pelts Braun with water bottles.) Nicholas Braun, left, as Greg Hirsch, in a scene with Matthew Macfadyen, right, as Tom Wamsgans, in the second season of HBO’s “Succession” in 2019.

Allison Keene noted in Paste Magazine that the show is a “marriage of parody with reality,” and she’s right. But our laughs shouldn’t make us treat it as just a joke. Remember, “Succession” is also reality: The show is based on years of research by its creator, Jesse Armstrong, who initially wrote a biopic about Rupert Murdoch and his heirs, the owners of Fox News. When that script didn’t pan out, Armstrong expanded his research to other media families and moguls, including Conrad Black and Sumner Redstone. The members of the Roy family are fictions drawn from multiple sources, but in their evident unfitness to rule, in their manifest sadomasochism, they are true-to-life iterations of our 1 percent overlords.

“Everybody is a coward, everybody is an idiot and everybody is trying to cover their back almost all of the time,” said Lucy Prebble, a writer and executive producer of the show, in an interview with the BBC. “That does feel what reality is like at the moment in terms of the powerful.” 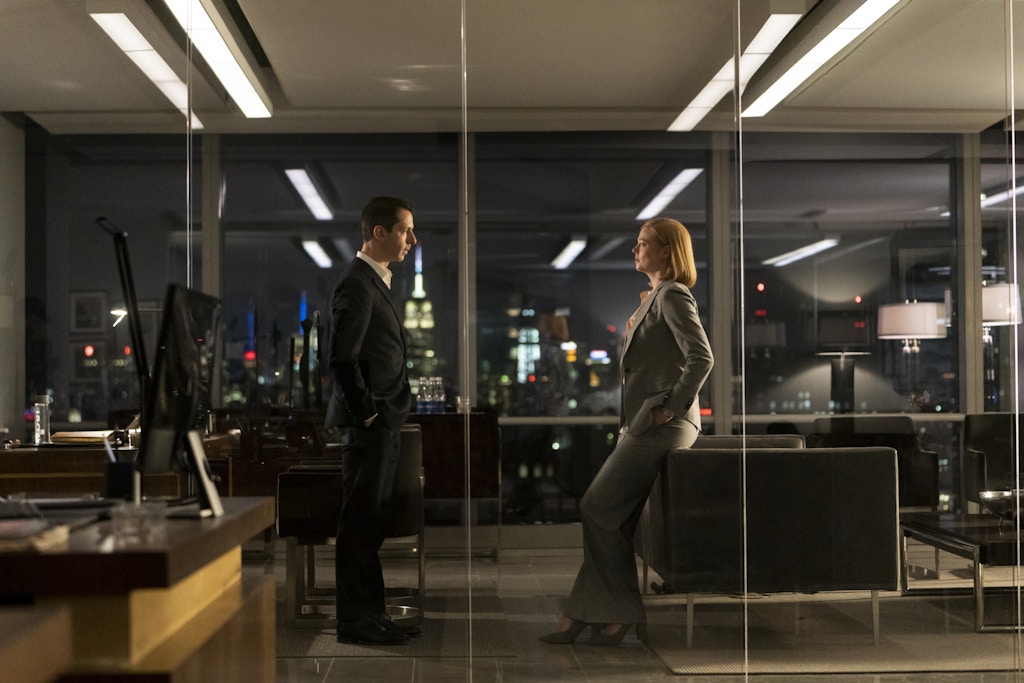 Jeremy Strong, as Kendall Roy, in a scene with sibling rival Siobhan “Shiv” Roy, played by Sarah Snook, in the second season of HBO’s “Succession” in 2019.

The show’s centerpiece is the rivalry between the three offspring who are vying to succeed the patriarch Logan, portrayed with masterful cunning by Brian Cox. As Variety has observed, the children are competing for the affection and favor of “an active madman,” and because they are foolish enough or greedy enough to seek his crown, they clearly deserve the humiliation that comes their way. The first season of the show, as well as the five episodes of the upcoming season that have been provided to reviewers, lay out on a cold examining table the foibles and faults of each would-be successor.

It’s hard not to be entertained by their absurdities. Look at Roman Roy, the youngest son, played with sleazy excellence by Kieran Culkin, who in the first season jauntily walked into his glass office, closed the interior blinds so co-workers could not see him, and proceeded to pleasure himself against an exalted view of the New York City skyline. In the second season, Roman finds yet another way, even more surprising, to satisfy his carnal inclinations and make us laugh or recoil in repulsion. He is a court jester with executive responsibilities, and the result is what you would expect. At the end of the last season, overseeing the development of a rocket that he had hurried to the launch pad, he watched a livestream on his phone as it exploded on takeoff — and then, in a bathroom, he literally washed his hands and returned to his sister’s wedding party as though nothing bad had happened. He seems too ridiculous for real life: How could anyone as inept as this third-rate scion be allowed near the C-suite?

The show lays out on a cold examining table the foibles and faults of each would-be successor.

The Murdoch correlation is relevant here. Just as the fictional Logan Roy has two sons and one daughter in the running to succeed him, Rupert Murdoch has two sons and one daughter who worked in his empire at various points and jockeyed to take over. In the real world, Murdoch’s eldest son, Lachlan, has won that competition, recently becoming the chief executive of Fox Corporation, largely because his politics are a carbon copy of the old man’s white supremacy. Lachlan is, in this way, a version of the eldest son in “Succession”: Kendall Roy, portrayed brilliantly by Jeremy Strong, spends the first episodes of the new season as a windup zombie, executing whatever orders his despotic father gives him.

Murdoch’s second son (his Roman, as it were) is James, a Harvard dropout who keenly wanted to succeed his father but missed his chance earlier this decade by botching a phone-hacking scandal at the family newspapers he oversaw in London. James’s failure was akin to Roman screwing up the rocket launch. James claimed, without much plausibility, that he had not read emails sent to him about the hacking scandal and that he had approved extravagant payoffs without knowing they were to cover up serious misdeeds. When the British government investigated the matter in 2012, its assessment of James was brutal. “James Murdoch’s exercise of responsibility was less than we would expect to see exhibited by a competent Chief Executive Officer,” the Office of Communications wrote, adding that his leadership “repeatedly fell short of the exercise of responsibility to be expected of him.”

“Succession” isn’t directly or only about the Murdochs; it is about an entire class of super-wealthy individuals, almost all of whom are men. As the British writer Hugh Montgomery has noted, the show is “part of a reckoning with the particular strain of rich white men who continue to have a grip on the Western political and media establishment — and have, arguably, or very clearly, abused that power to monstrous effect.” It is the show of our times.