Democrats Have an Open Senate Seat in New Mexico. Will They Elect a Progressive, or the Former Head of the DCCC? In 2018, Democrats were able to not only take back the House but also bring in a wave of outspoken progressives by taking full advantage of safely blue seats. Those new freshmen representatives have helped reshape the political conversation in Washington. Until now, the mobilization has been largely House-specific, but an open Senate seat from New Mexico has given the left a new opportunity.

The party establishment has already unified behind Ben Ray Luján, a New Mexico congressman, to fill the seat being vacated by Democratic Sen. Tom Udall, who is retiring. Luján — who is assistant House speaker, a close ally of Speaker Nancy Pelosi, and the chair of the Democratic Congressional Campaign Committee last cycle — was quickly endorsed by Pelosi after announcing his bid in April. In an unusual move, the Democratic Senatorial Campaign Committee, rather than letting the primary play out, endorsed him as well.

As the chair of the DCCC, Luján oversaw the party’s effort to beat back progressive challengers in open primaries across the country. Now, he faces such a challenge himself.

On August 13, the Working Families Party, which has become an increasingly potent player in the state’s politics, joined Action PAC (a project affiliated with The Intercept columnist Shaun King) and Blue America in endorsing Maggie Toulouse Oliver.  Oliver, a 43-year-old single mom whose children were on Medicaid when they were younger, began her career with the League of Conservation Voters and was elected secretary of state in 2014. An outspoken progressive, she backs a Green New Deal, Medicare for All, wants to abolish the Immigration and Customs Enforcement agency; as secretary of state, she enacted automatic voter registration and same-day registration.

The New Mexico race is the first serious attempt in 2020 by progressives to take the 2018 House primary playbook and port it over to a Senate campaign.

The Lujáns, on the other hand, are a political dynasty in New Mexico and arrived in the region as Spanish colonial settlers long before it was part of the United States. Ben Ray’s father, Ben Luján, was speaker of the New Mexico House. Michelle Luján Grisham serves as the state’s governor, and her uncle, Manuel Luján Jr., was a Republican who served in the U.S. House and as George H.W. Bush’s interior secretary. Eugene Luján was chief justice of the New Mexico Supreme Court.

The New Mexico race is the first serious attempt in 2020 by progressives to take the 2018 House primary playbook and port it over to a Senate campaign. For the DSCC to so quickly get behind Luján reflects a less secure party power structure, one that feels under siege in Washington from a rising progressive wing.

At a meeting on August 14 of major progressive groups in the state, Eric Griego of New Mexico WFP pushed for the movement to unify around Oliver, he said, but the groups — representing unions, the environment, and reproductive rights — were worried about taking on Luján and are so far staying out. “They’re looking at the bare-knuckle politics,” he told The Intercept. “Their heart is with Maggie, and everybody is scared shitless to get in the race.” There’s an asymmetry in how the parties approach primaries in relatively uncompetitive states. Republicans tend to fill open red Senate seats with true believers and ultraconservatives, as the party’s business wing and its activist base are largely aligned on major ideological questions. In the Democratic Party, the corporate donor base and party activists are at odds, with the former typically out-muscling the latter, which tilts the balance of power toward moderates in the Senate Democratic caucus.

Establishment Democrats often argue that they would prefer to elect more progressive candidates, but the demands of pragmatism, and the tilt of the electorate, require them to support centrist candidates with corporate backing. A 2018 academic study, however, cast significant doubt on that claim, offering evidence that those party leaders prefer centrist candidates but mask that preference in the language of pragmatism.

The tendencies on either side have had drastic implications, as Senate Republicans have moved to reshape the Senate into a vehicle for minority dominance, and Senate Democrats have largely attempted to hew to Senate norms. It took former Senate Majority Leader Harry Reid some five years to do modest filibuster reform, as he worked to overcome objections from inside his caucus to changing Senate rules. At the first hint of opposition to Supreme Court nominee Neil Gorsuch, Senate Majority Leader Mitch McConnell quickly ended the filibuster for Supreme Court nominees.

One obstacle for progressives in blue states is that they often have to run, in primaries, against candidates who aren’t obviously objectionable to Democratic voters — and have major backing from high-dollar donors. That combination is difficult to beat. Leading into the primary election between former New York Rep. Joe Crowley and Alexandria Ocasio-Cortez, for instance, there was no upsurge in local or national opinion that there was something terribly wrong with Crowley. Sure, he was heavily backed by corporate donors, but he largely voted the right way on the House floor. Only in victory has Ocasio-Cortez been able to demonstrate the genuine difference between the two to a national audience.

“There’s nothing wrong with Ben Ray Luján, but there’s something right about electing the first woman and a strong progressive from the blue state of New Mexico.”

Oliver faces the same challenge in New Mexico. “It’s not easy because he’s not somebody that people dislike. He’s not the enemy, but he’s not the best possible option,” said Heather Brewer, Oliver’s campaign manager. “There’s nothing wrong with Ben Ray Luján, but there’s something right about electing the first woman and a strong progressive from the blue state of New Mexico.”

And Luján has become even less wrong since running for Senate. After chairing the DCCC for two cycles and raising extraordinary sums of corporate money, he quickly raised some $200,000 of corporate PAC money for his Senate campaign. Yet after Oliver swore off corporate PAC money, Luján made the pledge too (though he has declined to return what he has already taken). Lujan also signed on to the Green New Deal, introduced by Ocasio-Cortez in February, after launching his campaign. Though he supported former Rep. John Conyers’s Medicare for All legislation once since he entered office in 2009, in June, he finally co-sponsored the one written by Rep. Pramila Jayapal, D-Wash., which earned him Jayapal’s endorsement.

Still, he hasn’t moved left on everything. Though Luján is the highest-ranking Hispanic lawmaker in Congress, and has condemned Trump’s policy of separating families and caging children, he has not aimed his fire squarely at ICE. Oliver is more outspoken on the question and has called for Immigration and Customs Enforcement to be abolished, with its responsibilities distributed to other agencies that do not act as rogue secret police forces.

And while Oliver has been calling for the impeachment of Donald Trump, Luján has hewed to the Pelosi line that it’s premature to move forward. “On the books, he’s got a decent record; he’s not bad, we could do worse,” Griego said. “He’s a consummate inside player, and a really loyal soldier to Pelosi.” 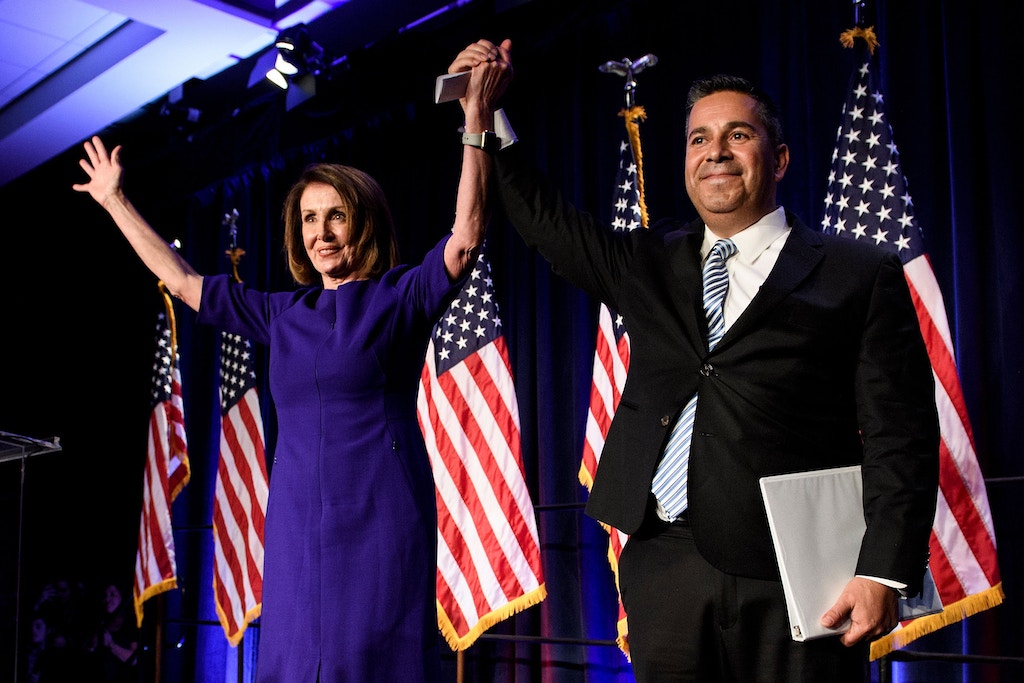 Then-House Minority Leader Nancy Pelosi and Rep. Ben Ray Luján, then chair of the Democratic Congressional Campaign Committee, at a midterm election night party hosted by the DCCC in Washington, D.C., on Nov. 7, 2018.

New Mexico has become increasingly progressive in recent years and, as the GOP has faded as a political force, leftist activists have focused their energy on corporate Democrats. The biggest win so far came in 2018 against Debbie Rodella, a powerful state lawmaker who was a one-woman obstacle to progress. WFP recruited and backed an insurgent challenger, Susan Herrera, who stunned the state by ousting her in a state House primary. WFP and other progressive allies are again focused on a handful of corporate-backed Democrats at the state level in 2020, even as the groups aren’t united behind Oliver.

The race for Oliver could come down to whether she can win the backing of reproductive rights groups and win heavily among women, who not only lean Democratic but tend to be more active on behalf of candidates than men. Getting the backing of EMILY’s List is critical; the organization’s brand is so strong with female donors that if a candidate doesn’t have that endorsement, it’s hard for them to raise money. Call back when you have their endorsement, multiple candidates have been told repeatedly during their own runs.

EMILY’s List endorsed Oliver’s run for secretary of state, but backing her against Luján would require the group to challenge the Democratic power structure, of which EMILY’s List is a part. Still, EMILY’s List staying out of the race would also be politically difficult. Only 56 women have served in the Senate in the entire history of the upper chamber, with just 25 serving today. And Luján, as chair of the DCCC, angered pro-choice groups by arguing that opposition to reproductive rights should not be a litmus test for candidates (but quickly backtracked under fire).

The longer it takes for Oliver to win the backing, the harder it becomes to raise the kind of money she’ll need to compete against Luján. (EMILY stands for “Early Money Is Like Yeast.”) Luján has raised more than $1.6 million so far to Oliver’s roughly $200,000, a disparity that was flagged by the progressive groups this week in their argument for why they should stay neutral.

Brewer said she was hopeful the campaign would earn the support of EMILY’s List. “I would assume given they’re a strong organization that supports pro-choice women, that that is their only consideration in how they make decisions,” she said. “I couldn’t speak to how Washington insiders might be trying to manipulate that.” And, Brewer argued, New Mexico races are relatively inexpensive; Oliver will be able to get her message out statewide for just a few million dollars, which Brewer was confident they could comfortably raise.

Ben Ray, a coincidentally named spokesperson for EMILY’s List, said that no decision had been made. “Our endorsements are a rolling process,” he said. “We are always happy to see strong women leaders like Maggie get in races like this.” (Rolling is one way to describe it; while outside activists often perceive EMILY’s List as dragging its feet, its endorsement process is cumbersome and laborious, involving a choice council that is difficult to convene at one time.)

Oliver, meanwhile, is also hoping to lock down national progressive endorsements from groups like Justice Democrats, MoveOn, the Progressive Change Campaign Committee, Democracy for America, the local Indivisible, and more. That could make up for the lack of support from other mainline progressive groups afraid to take on the party establishment.

Correction: August 19, 2019, 1:42 p.m.
This article also previously misstated that Luján held the DCCC chair for three cycles. He held it for two. It also previously stated that he had never supported Conyers’s Medicare for All bill. Luján co-sponsored it once, in 2009.