Everyone is needed in the climate fight, including brand ambassadors. But is the Senate Democrats’ Special Committee on the Climate Crisis doing everything it can? 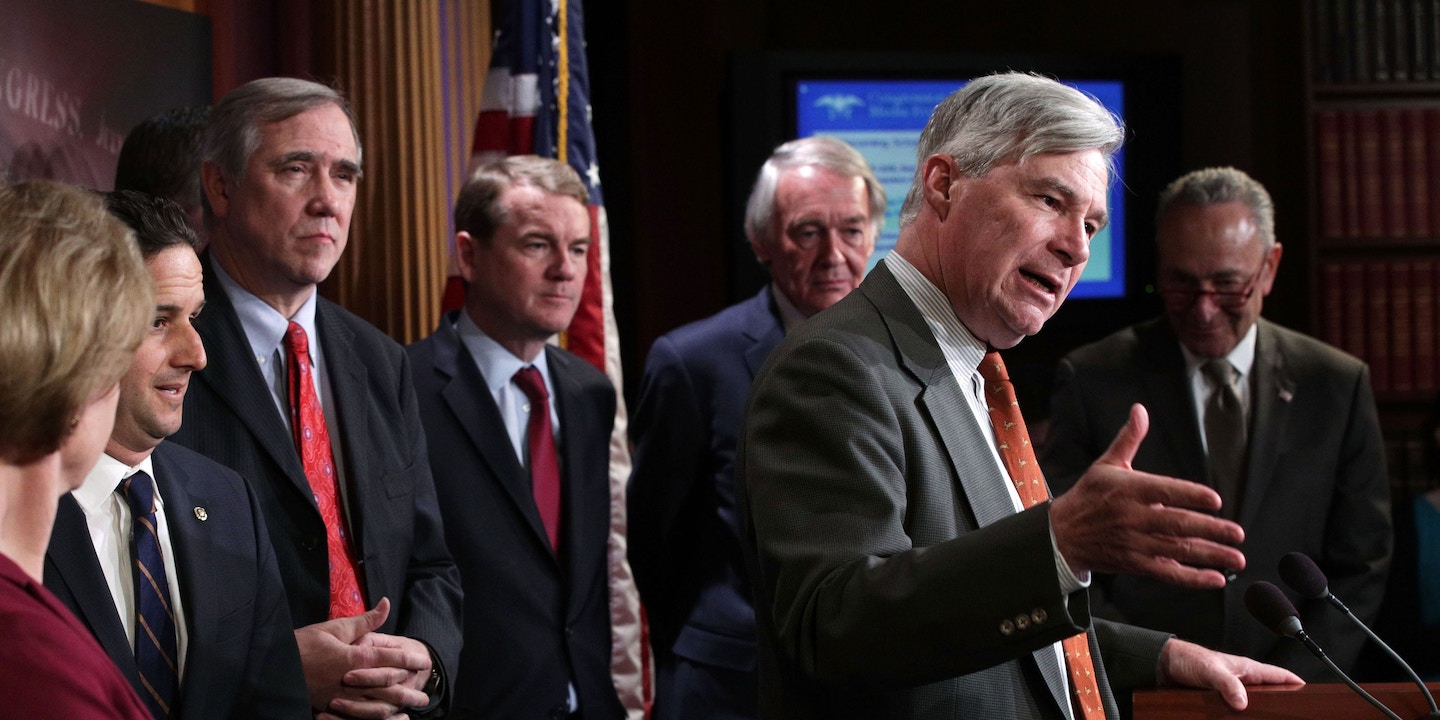 On Thursday, after a summer of extreme heat, the Senate Democrats’ Special Committee on the Climate Crisis convened to hear from a group of people especially affected by climate change. They were not members of low-income communities or communities of color, people who have been hit by hurricanes, wildfires, and other disasters. They were current and former professional athletes, appearing to testify on how climate change impacts winter sports and tourism industries.

The 10-member special committee, chaired by Sen. Brian Schatz, D-Hawaii, is tasked with investigating the impacts of climate change to develop the policy ideas necessary to pass “ambitious actions that are on scale with the problem” following the 2020 election. As long as Republicans control the Senate, there is virtually no chance of any meaningful legislation passing. “The goal is to lay down the factual basis for taking action, so that if we are in charge in 2021, we don’t have to go through 18 months of investigatory hearings,” Schatz told The Atlantic in July.

Broadly speaking, Democratic leaders have resisted calls for a more urgent push toward a Green New Deal by assuring climate activists that they are on their side, and that they’re hard at work on the problem. In the House, Speaker Nancy Pelosi, D-Calif., declined to create the kind of panel demanded by activists with the Sunrise Movement and Rep. Alexandria Ocasio-Cortez, D-N.Y., explaining that the standing committees with current jurisdiction could handle the legislation. To buck them, she created a Select Committee on the Climate Crisis, but declined to give it subpoena authority or otherwise empower it. Nearly a year later, it’s fair to ask: Do Democrats indeed have it under control?

And today, Sens. Mike Braun, R-Ind., and Chris Coons, D-Del., announced their plan to start a bipartisan caucus, getting Republicans involved in the climate discussions. “I look forward to continuing to work with Senator Braun, our colleagues, business leaders, and others to explore ways in which we can work together to curb the growing impacts of climate change,” Coons told the Washington Examiner. Professional skier Caroline Gleich testifies before the Democrats Special Committee on the Climate Crisis on Capitol Hill on Sept. 12, 2019.

Since its formation in late March, the Senate committee has met publicly with climate advocates on three different occasions and once privately with labor leaders — and avoided discussing the radical measures needed to counter the climate emergency.

Two out of four of the athletes brought to testify on the panel, called “The Fight to Save Winter: Pro Athletes for Climate Action,” are Instagram influencers. The witnesses were Mike Richter, a former professional ice hockey goaltender; Jeremy Jones, a professional snowboarder and founder of Protect Our Winters (85,200 followers); Tommy Caldwell, a professional climber (591,000 followers); and Caroline Gleich, a professional ski mountaineer (157,000 followers). (Caldwell and Gleich have also used their accounts to promote brands.) Caldwell posted about the Senate appearance on Instagram — as did Gleich, sponsored by Gaia Herbs.

“Good afternoon Senator Schatz and members of the Select Committee on the Climate Crisis,” Gleich began. “I am a professional ski mountaineer from Park City, Utah. I built a career working as an ambassador for brands including Patagonia, Keen, Julbo, and Movement Skis. … Having spent my lifetime exploring mountain environments, I have witnessed the impacts of climate change firsthand. It is clear to me our winters are warming and our snowpack is diminishing. As an alpinist, I climb a great deal of glaciers and ice, and there is no doubt increased temperatures are melting away both my sport and my livelihood.”

As Richter, currently the president of Brightcore Energy, noted: “These burdens that we not just allow, but create every day, of inaction on climate change fall disproportionately on the poor, women, and the young.”

Overwhelming public support will be necessary for the overhaul of the economy needed to meet the scale of the climate emergency — and to that end, everyone must be deployed, including brand ambassadors. But that assumes the party is doing everything it can too. On March 27, just a day after the Green New Deal resolution failed a procedural vote in the Senate, Democrats unveiled the Special Committee on the Climate Crisis. Senate Majority Leader Mitch McConnell had orchestrated the vote as an attempt to embarrass Democrats, particularly the ones running for president, and to get them to record their position on the resolution. Forty-three Democrats voted “present” to dodge the “political stunt,” while also refusing to take a stance on a measure that has broad support among American voters. In April, Yale University conducted a study that found 69 percent of registered voters support the Green New Deal, including 93 percent of Democrats, 64 percent of independents, and 44 percent of Republicans.

Schatz, a self-described climate hawk, hasn’t actually signed on as a co-sponsor of the Green New Deal resolution introduced by Ocasio-Cortez and Massachusetts Sen. Ed Markey. Schatz has praised and “endorsed” the proposal, but he has said he plans to roll out his own legislation instead. Asked about the status of his legislation, Schatz said in a statement to The Intercept, “Earlier this year, Sheldon Whitehouse and I introduced our carbon fee bill. And while it’s one of the best options we have for tackling climate change, there is no silver bullet. We need to do it all — carbon pricing, conservation and efficiency, wind, solar — everything.”

According to the committee’s website, members are tasked with investigating the “efforts of special interests to foster climate denial” and convening meetings with “frontline communities impacted by climate change,” as well as experts from the environmental, national security, and economic development communities. The other members of the committee include Markey and Sens. Tammy Baldwin of Wisconsin, Michael Bennet of Colorado, Catherine Cortez Masto of Nevada, Tammy Duckworth of Illinois, Martin Heinrich of New Mexico, Jeff Merkley of Oregon, Tina Smith of Minnesota, and Sheldon Whitehouse of Rhode Island.

So, naturally, the committee dedicated its second public hearing to a panel of former climate deniers. At July’s hearing, titled “The Right Thing to Do: Conservatives for Climate Action,” lawmakers asked a group of conservatives — which included veteran GOP strategist and pollster Frank Luntz — for advice on messaging ideas to reach and convert Republicans.

Luntz, who infamously advised the Bush administration to cast doubt on the science of climate change, brought a chart of “words to use and words to lose” to the hearing. He suggested that advocates use words like “cleaner, safer, and healthier,” and drop words like “sustainable” or “sustainability.” Instead of talking about the “jobs” that would be created through climate action, he said, activists should use the word “careers.” But the best way to break down barriers between the left and the right, according to Luntz, is to stay away from the science of climate change and pitch climate action as a personal win-win instead.

Yes, I‘ve changed my opinion on #ClimateChange since authoring a skeptical memo 18 years ago.

Now, I want to use my powers for good and find ways to make it a nonpartisan issue. (Look how the @FloridaGOP has shifted after hearing the concerns of their coastal constituency.) pic.twitter.com/KFrKoT4qQR

“If we do this right, we get cleaner air, we get less dependence on foreign fuels, enhanced national security, we get more innovation in our economy, and more jobs and great new careers. And that’s if the scientists are wrong,” Luntz said. “If the scientists are right, we get all of those things and begin to solve what could be the most catastrophic environmental problem that any of us have faced.”

Another of the Republican witnesses, Nick Huey, founder of the Climate Campaign, choked back tears as he delivered an impassioned plea for bipartisanship and centrism. The solution to climate change, he said, is to “become radical Far-Middle-ists.”

“In the Far Middle, a liberal atheist and a conservative Mormon Christian can sit down and have a real conversation about climate, health care, guns, and gays, and leave with new ideas,” he said. “In the Far Middle, we treasure diversity of thought every bit as much as we treasure diversity of skin color, even when those thoughts are in direct conflict with our own.”

“The Far Middle has been muted by two warring parties, but we are still America’s majority. Give us our voice back,” he continued. “Only then can the Far Middle become the strong and decisive force in Washington it once was. Create the Far Middle, and climate change will take care of itself.”

Only the special committee’s first public hearing, titled “A Blueprint for Success: U.S. Climate Action at the Local Level,” discussed policy specifics. In July, five mayors appeared in Congress to discuss their cities’ efforts to combat carbon pollution. But aside from Pittsburgh Mayor William Peduto calling for a “Marshall Plan for the Midwest” to create jobs in clean energy, nearly all the ideas put forward — like investment in electric buses and transit infrastructure — fell short of the radical work needed to stave off climate hell.