If You Are Black and in a Mental Health Crisis, 911 Can Be a Death Sentence

There’s a pattern of black families calling the police for a relative in a mental health crisis — and the police then kill that person. 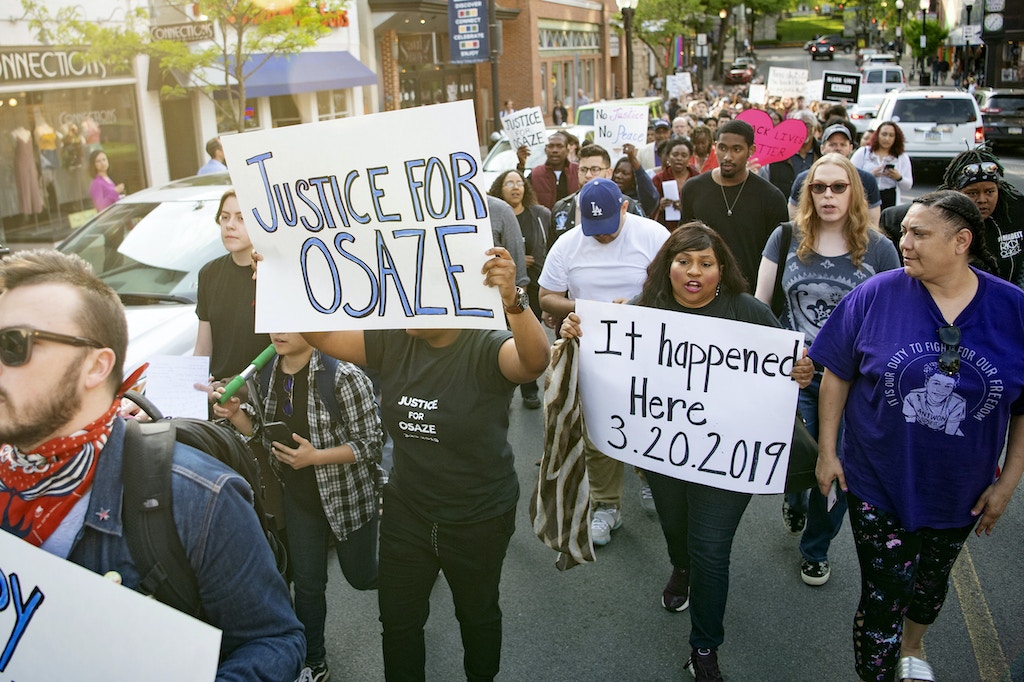 Community members sing and march in downtown State College, Pa., on May 8, 2019. A central Pennsylvania prosecutor says no charges will be filed in the death of Osaze Osagie, an autistic man shot by police earlier this year.

Osaze Osagie, 29, was beloved by his family and community. At his funeral this March, so many people showed up to pay their respects that every seat in the main room was taken and at least 100 more were filled in an overflow area. Person after person told stories of his warmth and kindness. Ten days earlier, his father, Sylvester, made a simple call to local police to perform a mental health “wellness check” on his son. Osagie was shot and killed in his own home by police in State College, Pennsylvania, soon thereafter.

Osagie had been hospitalized at least six times over the years; with a history of autism, paranoid schizophrenia, extreme anxiety, and Asperger’s syndrome, he sometimes struggled to function in society. Last December, his family was proud when he transitioned out of a community residential center to an apartment of his own. As much as they wanted it to work out for him, it was rough. Osagie stopped attending support meetings and cycled on and off his medications. On March 10, after sending texts to family suggesting that he might harm himself, they called 911 for support.

When police got there, they claimed that Osagie had a knife that he refused to put down. When he walked toward the officers, they claimed that a Taser had no impact on him, so they shot and killed him right there on the spot. This past week, the family announced their intention to file a lawsuit against the police department for abandoning multiple protocols when their son was confronted and killed.

Over the past five years, I’ve closely studied thousands of police shootings and seen a trend of black families under duress calling 911 during a mental health emergency, only for their loved one to be killed by police as a result. Of course, when a black family calls 911 for support in a mental health emergency and it goes well, that doesn’t make the news. But the fact remains that in general, black families remain skeptical of calling the police for help under any circumstance — and fatal encounters like the one experienced by the Osagie family confirm those doubts.

Black families remain skeptical of calling the police for help under any circumstance — and fatal encounters like the one experienced by the Osagie family confirm those doubts.

But African Americans are at even higher risk due to the racism in our country and in our police forces. Right now, outside of Atlanta, a trial is underway for the officer who shot and killed Anthony Hill, an Afghanistan war veteran who had a mental illness. Hill was not only unarmed, but he was also completely nude. He needed immediate medical attention. Instead, he was fatally shot by an officer who claimed what officers often claim: that he feared for his life.

This past December, the city of New York paid the family of Deborah Danner — a 66-year-old black woman with a long history of mental illness, who was also completely nude and in her own home — $2 million after an New York Police Department officer shot and killed her. She, too, needed medical help, but got bullets instead.

It is interesting how many times American police routinely find a way to push past such fears to peacefully arrest white mass shooters who were heavily armed and just slaughtered scores of people. For years, I used to advocate for police to receive more training to prevent the shooting deaths of people like Hill and Danner. Cut after seeing police from coast to coast routinely exercise so much restraint and patience when arresting armed white shooters, I’m no longer confident that training is the problem. Police seem fully capable of exercising restraint when they feel like it.

The list of black deaths is so long. This past May, Pamela Turner, a 44-year-old black woman experiencing a mental health crisis was shot and killed by police in Texas. In Oklahoma this past April, 17-year-old Isaiah Lewis, also naked and in a mental health crisis, was shot and killed by police. This past June, Taun Hall called 911 for support with her 23-year-old-son, Miles, who had a mental illness. Police shot and killed him. The latest research suggests that no single group of people is more likely to be killed by police than young black boys and men — registering even higher than white people with mental illnesses. Consequently, young black men with mental illnesses are in the single most at-risk category in the nation for fatal police violence.

People live with mental illness all over the world without being shot and killed by police. This happens, in great part, because police in many countries aren’t trained with a “shoot first, ask questions later” type of mentality. In fact, in many countries, it is the standard for mental health experts and nurses to travel with police on mental health calls. Those practices are already being deployed in a few places in the United States, but New York City Public Advocate Jumaane Willis is proposing a complete overhaul for the police response to mental health calls in our nation’s largest city. Last year, a staggering 180,000 unique calls were made to 911 in New York City for “emotionally disturbed persons.” But 78 percent of NYPD officers haven’t even received training on how to handle the calls. That’s not going to work. They all need training, but Williams is proposing that expert mental health teams be dispatched to these calls.

No solutions to this crisis are simple, but the bottom line is that what we have right now is just not sustainable.

How Do Chicago Police Treat Mental Health? With SWAT Raids

Envisioning an America Free From Police Violence and Control