In Midst of Bankruptcy Fight, Elizabeth Warren Said “Joe Biden Should Not Be Allowed to Sell Out Women”

Warren repeatedly singled out Biden, arguing he “should not be allowed to sell out women in the morning and be heralded as their friend in the evening.” 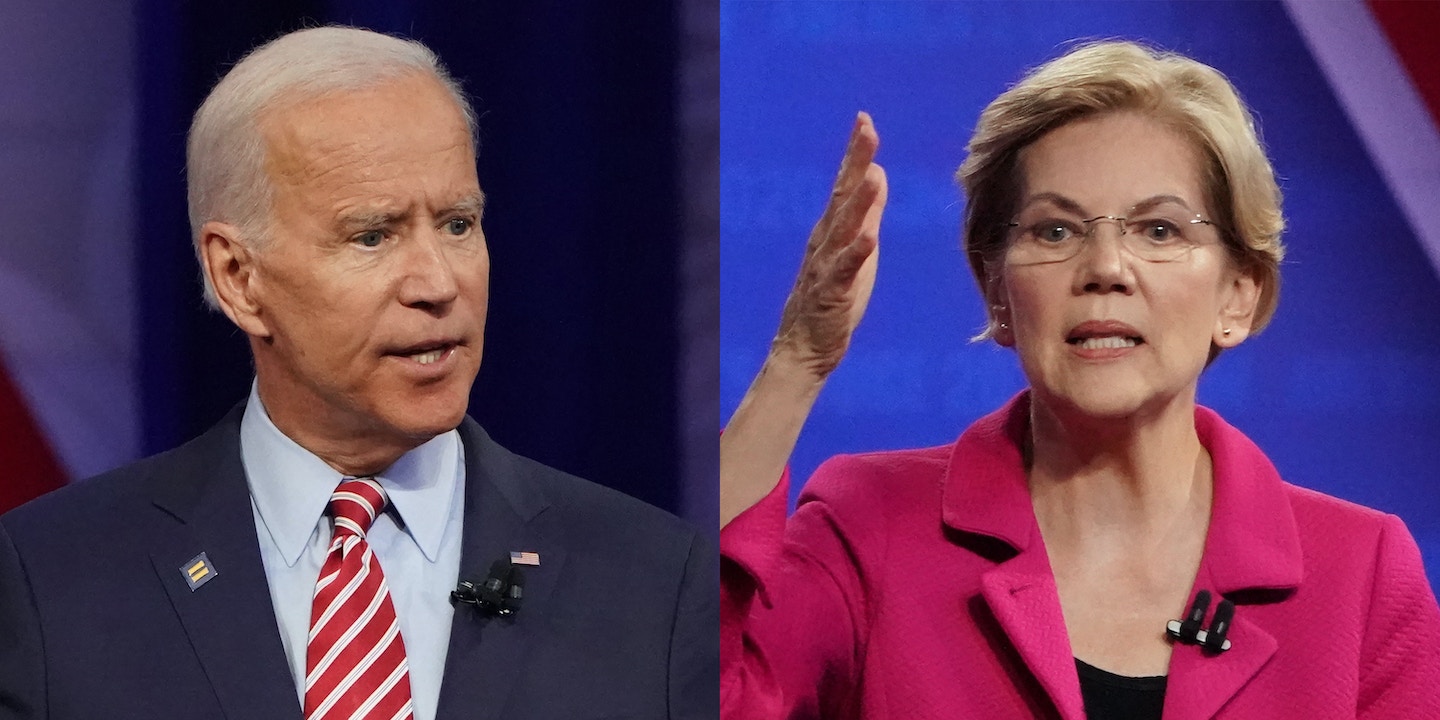 So far, the interactions between Joe Biden and Elizabeth Warren during the Democratic presidential campaign have remained remarkably tame, a surprise to anybody who watched the two begin tangling as far back as the 1990s. It’s especially surprising considering the strong words that Warren, a Massachusetts senator, had for the not-yet vice president back in the day.

One of Warren’s few shots at Biden throughout the campaign came in a gaggle with reporters after a rally in April in Iowa, when she was asked about her fight against bankruptcy reform. “I got in that fight because [families] just didn’t have anyone — and Joe Biden was on the side of the credit card companies,” Warren said.

“It’s all a matter of public record,” she added. Indeed it is, which makes it all the more surprising that debate moderators have so far declined to press Warren on some of her previous criticisms of Biden. After all, their battle over bankruptcy laws goes to the heart of their political and ideological disagreements. For Warren, Biden’s successful push to make it harder for struggling people to file for bankruptcy is Exhibit A in her case that big money — in this instance, from credit card companies based in Delaware — corrupts the system, rigging it against regular people.

What’s worse, Warren has charged, is that Biden’s push for bankruptcy reform, which was particularly harmful to women, was enabled by the political capital he accrued through his championing of another piece of legislation that genuinely benefited women. One of Biden’s main achievements as a senator (or, at least, the one he can still tout in a Democratic primary) was his ushering of the Violence Against Women Act in 1994. In her 2003 book “The Two-Income Trap,” Warren came after the then-Delaware senator for his championing of bankruptcy legislation that she argued would be particularly harmful to women:

Women’s groups have too few dollars and too little (wo)man power to fight every injustice. But there is another lesson in the tale of the bankruptcy bill. Women’s issues are not just about childbearing or domestic violence. If it were framed properly, middle-class economic reform just might become the issue that could galvanize millions of mainstream women to join the fight for women’s issues. The numbers are certainly there. This year, more women will file bankruptcy papers than will receive college diplomas. More women with children will search for a bankruptcy lawyer than will seek subsidized day care. And in a statistic with special significance for Senator Biden, more women will be victimized by predatory lenders than will seek protection from an abusive husband or boyfriend.

The point is not to discredit other worthy causes or to pit one disadvantaged group against another nor would we suggest that battered women deserve less help or that subsidized day care is unimportant. The point is simply that family economics should not be left to giant corporations and paid lobbyists, and senators like Joe Biden should not be allowed to sell out women in the morning and be heralded as their friend in the evening. Middle-class women need help, and right now no one is putting their economic interests first.

Biden later responded by claiming, “Contrary to a lot of the rhetoric that has been tossed around, this bill actually improves the situation of women and children who depend on child support,” citing changes to the law that could help women collect from men who had filed for bankruptcy. He introduced into the congressional record a letter from the National Child Support Enforcement Association that said that the objections by women’s groups — which were worried about women who would no longer be able to win bankruptcy protections — were “based on the vague and unarticulated fears that women will be unfairly disadvantaged.”

“Senators like Joe Biden should not be allowed to sell out women in the morning and be heralded as their friend in the evening.”

Warren had been researching the causes of bankruptcy for several decades by that point and in 1995, had been appointed to the National Bankruptcy Review Commission by a congressperson from Oklahoma, where she was born and raised. Biden had been pushing bankruptcy reform since the late 1990s, arguing that consumers were abusing the system and that it needed to be tightened to make it harder to file. The legislation passed under President Bill Clinton, but he stunned Congress by vetoing it at the last moment. It was revived in the early years of the Bush administration.

Biden was quite familiar with Warren, who voiced her concerns publicly. “Those who want to say the way to solve rising consumer bankruptcy is by changing the law are the same people who would have said during a malaria epidemic that the way to cut down on hospital admissions is to lock the door,” she told the Washington Post in 1998. “Bankruptcy is only the symptom, not the problem.”

Linking bankruptcy with women’s issues in her book wasn’t a half-baked, throwaway criticism. In 2002, she had published an academic paper in the Harvard Women’s Law Journal titled “What is a Women’s Issue? Bankruptcy, Commercial Law, and Other Gender-Neutral Topics,” and the paper goes in hard on Biden.

She opened it by noting that the 2001 Annual Report of the National Organization for Women Legal Defense and Education Fund boasted a fawning photo of Biden standing shoulder to shoulder with a dozen women, celebrating the renewal of the Violence Against Women Act. He’s the only politician called out by name, she noted, before digging into the hypocrisy.

Missing, for example, is a picture of Senator Biden standing shoulder to shoulder with the CEOs of the credit industry, cosponsoring legislation to increase restrictions on consumer and small business bankruptcy. His energetic work on behalf of the credit card companies has earned him the affection of the banking industry and protected him from any well-funded challengers for his Senate seat. This important part of Senator Biden’s legislative work also appears to be missing from his Web site and publicity releases. … The group that will be most affected by the changes in the bankruptcy legislation Senator Biden so forcefully supports will be women, particularly women heads of household who are supporting children. Indeed, women are now the largest demographic group in bankruptcy, outnumbering men by about 150,000 per year.

NOW’s Legal Defense and Education Fund, Warren noted, was actively opposed to the bankruptcy bill, yet Biden was able to win plaudits from them anyway. Warren, in the paper, highlights a sea-change in bankruptcy over the previous two decades: single and divorced women had become the most likely demographic to use filing for bankruptcy to escape crushing debt. Making it harder to file would hit women particularly hard. Yet, she argued, bankruptcy is not seen by the public and the media as a women’s issue. She wrote in the abstract:

A number of political issues have become publicly identified as women’s issues, actively promoted by women’s groups and supported by politicians eager to portray themselves as supporters of women. By contrast, some issues are gender-neutral, such as economic or business issues that are of no special concern to any gender-based constituency. The 2002 bankruptcy bill, advanced by the consumer credit industry as its highest legislative priority, features a number of provisions that would fall especially hard on households headed by women and on women with children. Far more women will be affected by changes in the bankruptcy bill than almost any other legislation pending in Washington in the past several years, yet the bill has not become a rallying point for those committed to equal justice and fairness for women. Why? This essay explores how some issues become “women’s issues,” while bankruptcy remains low on the agenda of most politically active women’s groups.

Having Biden’s support for the bill, Warren argued, was crucial for the Delaware-based credit card industry to avoid the appearance of seeming anti-woman. “Because Senator Biden has expressly rejected concerns raised about the bill’s effect on women,” she wrote, “he has shielded his colleagues on both sides of the aisle from being branded as anti-women for their support of this legislation.”

“I’m not the senator from MBNA,” Biden protested.

The same year, in a column in the New York Times headlined “A Quiet Attack on Women,” she again hit Biden by name, linking him to the banking industry. “The current bill was stuck in conference between the Senate and House until Senator Joseph Biden of Delaware — where many banks and credit-card issuers are incorporated — agreed to vote with Republicans on almost all the issues that were holding up the bill,” Warren wrote.  “Apparently many politicians believe they can remove the last safety net for families facing financial disaster (many of which are led by women) so long as they can find another highly visible issue that lets them proclaim their support for women.”

While MBNA, the credit card company based in Delaware, was pushing the legislation, Biden faced charges of being too close to the company. “I’m not the senator from MBNA,” he protested to the Washington Post in 1999. Three years earlier, his son Hunter Biden had joined MBNA as a senior official. In 2001, Hunter Biden became a federal lobbyist, but stayed on at MBNA as a consultant at a fee of $100,000 per year.

The bill was finally signed into law by President George W. Bush in 2005, and it blocked the ability of people to discharge private student loan debt. Such debt soared in the wake of the legislation, now reaching crisis levels. Biden also opposed an amendment that would have made it easier to discharge medical debt.

While the bankruptcy wars have yet to resurface in the 2020 primary, they did in 2016. Arguing that she had never changed a vote because of the influence of money, Hillary Clinton put out a challenge. “Anybody who knows me who thinks that they can influence me, name anything they’ve influenced me on,” Clinton said at a CNN forum in February 2016. “Just name one thing.”

Warren had previously slammed Clinton for opposing bankruptcy reform as first lady, only to vote for it as a senator. “The bill was essentially the same, but Hillary Rodham Clinton was not,” she wrote in “The Two-Income Trap.” “Hillary Clinton could not afford such a principled position. Campaigns cost money, and that money wasn’t coming from families in financial trouble.”