There’s a blueprint for getting rid of solitary confinement that requires only a few basic steps from the mayor and city bureaucracies. 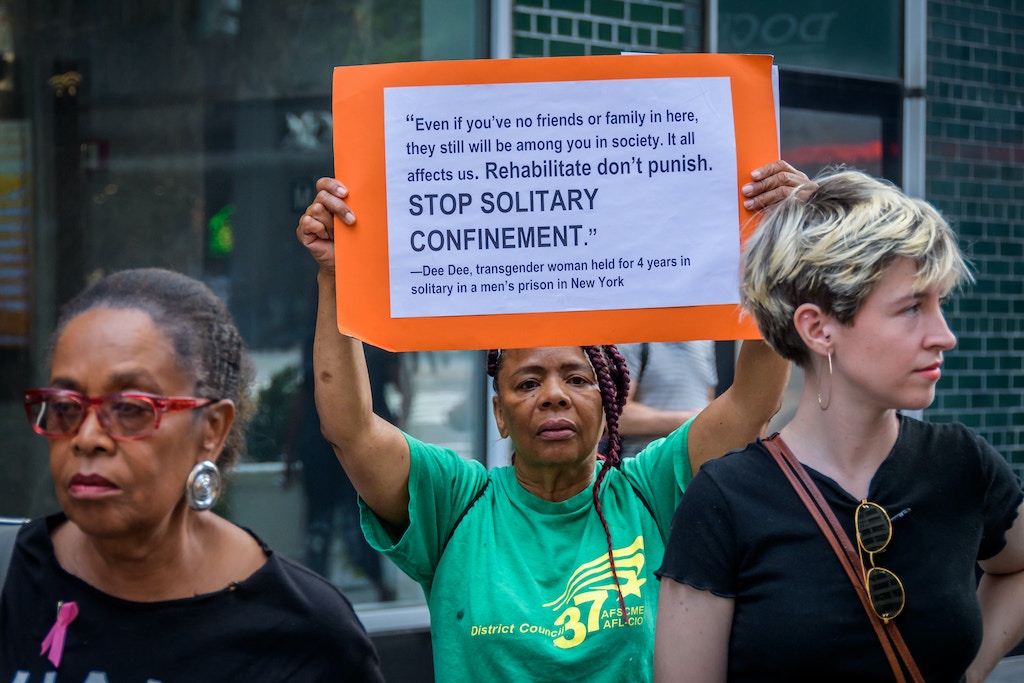 Protesters rally outside Gov. Andrew Cuomo’s office in Manhattan, demanding support for the passage of the Human Alternatives to Long-Term Solitary Confinement Act, on Oct. 2, 2019.

Last June, Layleen Polanco, a 27-year-old Afro-Latina trans woman, was found dead after nine days in solitary confinement at New York’s Rikers Island jail. I wrote at the time that her death sat at the intersection of some of the criminal justice system’s worst excesses, including the criminalization of sex workers, the policing of transgender women of color, and the cash-bail system. Polanco was being held on $500 bail, the result of misdemeanor charges for a prostitution-related offense and a low-level drug charge. A federal lawsuit over her death placed particular blame on the fact that she was held in solitary confinement.

Polanco, despite having a history of epilepsy and schizophrenia diagnoses, was placed in a segregated housing unit — commonly known as solitary. She was found “cold to the touch” by first responders, according to the lawsuit, with untreated head and facial injuries. In response to righteous outcry over her death — along with a number of other highly publicized deaths in isolated cells — New York Mayor Bill de Blasio was asked last summer about whether he would move to end solitary confinement in New York City jails. “I’m not there yet,” the mayor responded.

For criminal justice advocates, though, the time to end the torturous practice is already long overdue. Now these advocates have developed a blueprint to get it done.

“New York City must take action to finally and fully eliminate solitary confinement in all its forms before any other lives are taken or minds destroyed, and the released blueprint provides the mechanisms to do so,” noted a statement from HALT Solitary and Jails Action Coalition sent to The Intercept.

The impetus for action is simple: It’s a moral imperative. Solitary confinement is torture. Nonetheless, around 61,000 people are in solitary on a given day in U.S. prisons, a figure that does not even include solitary units in local jails and juvenile or immigrant detention facilities. A study of New York City jails, requested by the Board of Correction in 2013, found that people in solitary are already seven times more likely to harm themselves and more than six times more likely to commit potentially fatal self-harm.

There’s reason, though, for some pessimism. Just last week, the city approved de Blasio’s plan to shutter Rikers Island — only to replace it with four new jails. The plan is problematic enough in its basic outline — the creation of new, expensive cages for humans to replace the undeniable horror of Rikers — but all the more troubling in that current design plans for the new facilities include cells designated for solitary confinement.

“It’s time for New York to completely end solitary confinement and take responsibility for its unforgivable acts towards human beings.”

The advocates’ blueprint to end solitary confinement is nothing radical. The majority of its provisions are demands to strengthen existing standards or follow the example of previous successful experiments to replace solitary confinement. Indeed, the fact that a plan to end solitary can be so straightforward makes clear that the continued use of the practice speaks to the intransigence of carceral ideology, rather than an absence of better alternatives.

“How can we continue using the term ‘corrections’ when torture is what describes it best?” said Akeem Browder, a social justice advocate and brother of the late Kalief Browder, who took his own life at home six months after being released from Rikers, where he awaited trial for three years — spending about two-thirds of that time in solitary. “For my brother, Kalief, suffering in a torturous solitary cell during the hottest days of New York’s summer or the coldest nights, this was just one of the many torments that contributed to his and countless others’ deaths.” For Akeem Browder, the ban on solitary for youths is insufficient: “It’s time for New York to completely end solitary confinement and take responsibility for its unforgivable acts towards human beings.”

The blueprint for New York city jails contains just five points, which, if implemented as jail policies, would end the use of solitary. Standards for required minimum out-of-cell time for people incarcerated in city jails already exist. However, these guidelines can be flouted in the case of so-called exceptions for punitive segregation and, in rarer cases, Enhanced Supervision Housing, or ESH, Units, which are for inmates who the Corrections Department deems “most dangerous.” In jails like Rikers, the exception is the rule. Hundreds are held in isolation for days, weeks, and months; black, Latinx, queer, and trans inmates are disproportionately sent to solitary.

According to Board of Correction statistics, in June and July, 117 individuals were held in punitive segregation. In 2018, the then-chair of the board, Derrick Cephas, said that a spread of 47 different restrictive housing units across the city housed over 450 people.

The advocates’ blueprint demands an end to exceptions that curtail out-of-cell time; an end to punitive segregation; and a dramatic rethinking of ESH units, such that the so-called most dangerous incarcerated people are not left in perilous isolation.

The blueprint cites the example of San Francisco’s Resolve to Stop the Violence Project, known as RSVP, which, instead of segregation, used group discussions, classes, intensive counseling, and meetings with victims of violence. “During the time period reported on, RSVP resulted in a 25-fold reduction in violent incidents, five-fold reduction in rearrests for violent crimes, six-fold reduction in jail time, and cost savings,” HALT Solitary said. Other provisions in the blueprint demand a heavily restricted use of restraints and the creation of minimum standards for emergency individual lock-ins and emergency lockdowns.

Roger Clark, a lead organizer with the New York Campaign for Alternatives to Isolated Confinement coalition, is among the formerly incarcerated survivors of solitary confinement advocating for the blueprint’s implementation. “I’m still haunted by those days,” he told me.

Clark was placed in solitary both during his pretrial detention at Rikers and while serving time at Southport Correctional Facility, New York’s first supermax prison dedicated to 23-hour lockdown. “You can’t shut off your mind; in the summertime it’s too hot; in the winter, it’s too cold,” he said, describing how guards would close or open windows, or leave on lights, to further brutalize isolated, incarcerated people. “I had years of torture. I consider it torture.” Clark added that the coalition is pushing hard to see the blueprint adopted and has already received significant backing from politicians.

The demand to ban solitary confinement already has the support of the New York City Council Progressive and Women’s Caucuses, and comes at a time when presidential candidates ranging from Sen. Bernie Sanders, I-Vt., to Sen. Kamala Harris, D-Calif., a former prosecutor and incarceration enthusiast, have called to end, or greatly restrict, the use of solitary confinement. New York City Councilperson Bill Perkins, who as a then-New York state senator was the lead sponsor of the HALT Solitary Confinement Act, is now among the local politicians pushing for the blueprint from his current position. In a statement, Perkins said, “This Blueprint provides the way forward to end this torture and New York City must take action immediately.”

The blueprint’s release also coincides with the expected announcement for new, more modest proposed rules by the Board of Correction on Tuesday, which would restrict some forms of solitary confinement to 15 consecutive days, down from the current 30, and consider limits on the use of restraints and other types of restrictive housing. Yet even the implementation of these more limited provisions, which make the blueprint look far-reaching, is not assured.

The immediate adoption of a citywide plan to ban solitary confinement is the least the mayor’s office and corrections officials should commit to, if they are purporting to champion reform.

As The City reported on Thursday, de Blasio ousted Board of Correction Commissioner Bryanne Hamill, a former family court judge who had been working for years on the proposals to restrict the use of solitary confinement. Meanwhile, the powerful Correction Officers’ Benevolent Association is expected to be a reliable roadblock, having enabled and enforced the culture of guard violence and impunity for years, while causing significant reforms to stall.

On Thursday, de Blasio celebrated the city council’s approval of his new jails plan as a progressive victory. “Today we made history: The era of mass incarceration is over,” he said. For decarceration advocates who see the plan for more local, borough-based jails as a carceral solution to a carceral problem, the mayor’s words rang hollow. As The City reported, “The plan to replace Rikers Island with four borough-based jails details physical constraints for the new buildings, but largely does not address the treatment of detainees.”

The immediate adoption of a citywide plan to ban solitary confinement is the least the mayor’s office and corrections officials should commit to, if they are purporting to champion reform. Yet even the blueprint’s authors make clear that “ending solitary confinement is only one step. Fundamentally shifting away from isolation and deprivation — and from the entire racist and destructive punishment paradigm — is necessary to achieve safety and justice.”