Giuliani’s entire post-government life has been a case study in ethical adventurism, if not actual criminal conduct. 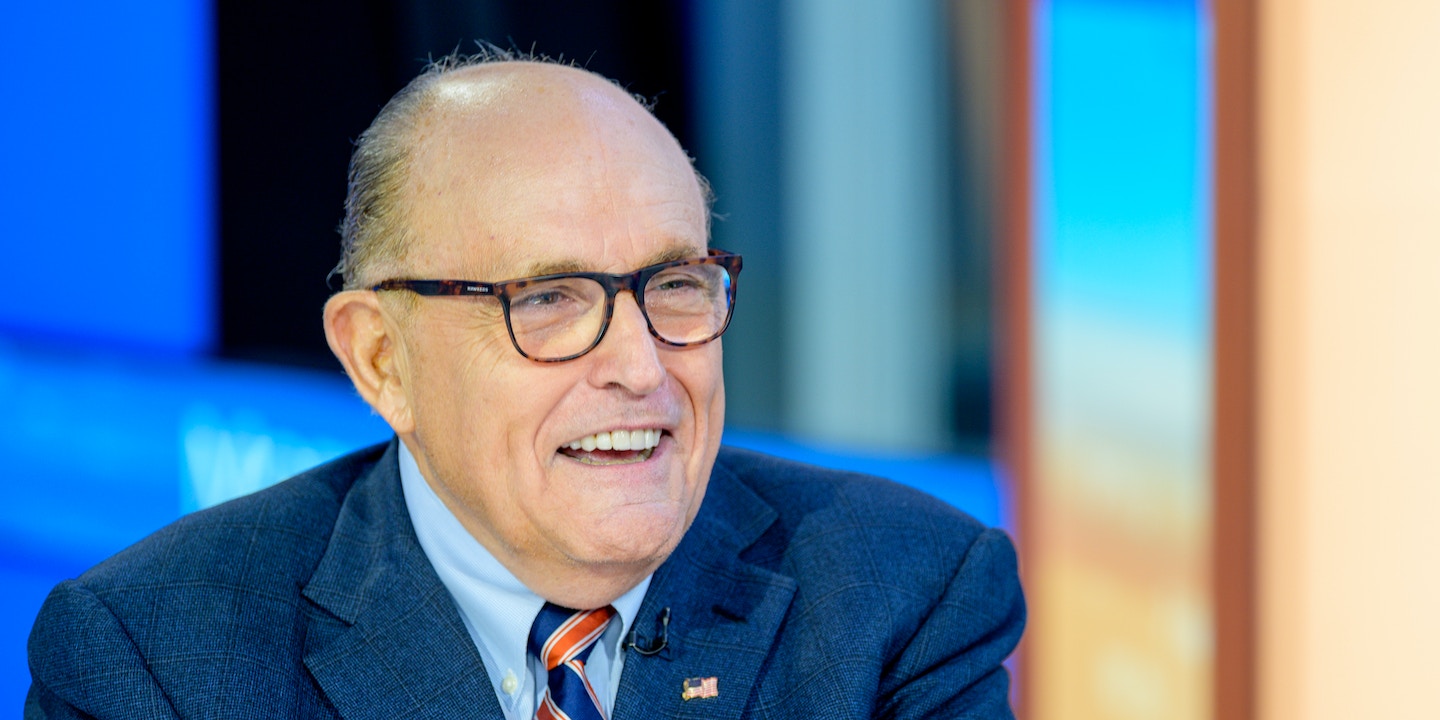 Rudy Giuliani secured a dubious distinction earlier this month when he became the second known ex-U.S. attorney for the Southern District of New York to face investigation by his former office.

The news followed a succession of incriminating allegations against Giuliani. The sources of these leaks are not public, but the information behind them comes from the U.S. Attorney’s office, where Giuliani himself introduced the media leak as one of the most devastating tools in a prosecutor’s arsenal.

The fact that Giuliani — who has advocated a distinct brand of lawlessness as President Donald Trump’s TV lawyer — merits the attention of federal investigators only emphasizes the through-the-looking-glass quality of Attorney General William Barr’s Department of Justice. The only other Southern District U.S. Attorney to be implicated in a potential crime by his own office was Morton S. Robson, who was accused of receiving a bribe from Roy Cohn to drop a case. (The prosecutor was never charged and Cohn was acquitted.)

Indeed, Giuliani’s entire post-government life has provided a case study in ethical adventurism, if not actual criminal conduct. Among the many clients for whom he did political consulting was Peruvian presidential candidate Keiko Fujimori, whose father, a previous Peruvian president, was convicted of ordering the extrajudicial execution of 15 people. Fujimori lost both her campaigns for the presidency; she was named in the Panama Papers as a client of Mossack Fonseca, the law firm at the center of the document leak, and accused of funding her political career through money laundering and bribes.

Giuliani also consulted for Aleksandar Vucic, a mayoral candidate in Belgrade, Serbia, who once served as the information minister to accused war criminal Slobodan Milosevic. Vucic eventually won the Serbian presidency and the Trump White House sent a delegation to attend his inauguration. Last year, Vucic’s political party opened an office on the site of Staro Sajmiste, a concentration and extermination camp run by the Nazis during their World War II occupation of Belgrade. (In 1989, a Holocaust survivor charged by Giuliani’s prosecutors was placed opposite a blackboard inside the U.S. Attorney’s office with the slogan “arbeit macht frei.” The man was acquitted, and the judge in the case did not find evidence of Giuliani’s involvement in what the suspect described as an effort to pressure him to cooperate with federal investigators.)

Giuliani’s post-government work eventually brought him into direct conflict with Southern District prosecutors when he represented Reza Zarrab, an Iranian-Turkish gold trader charged with evading U.S. sanctions. The case raised immediate diplomatic issues, with Turkish President Recep Tayyip Erdogan pressing both the Obama and Trump administrations to release Zarrab. Giuliani did not intend to appear for his client at trial, according to his co-counsel; his role was to pursue an outside resolution to the case. That ultimately involved Trump seeking to enlist then-Secretary of State Rex Tillerson to ask the Justice Department to drop charges against Zarrab, as Bloomberg first reported last week. To break that down: Giuliani sought help for a Turkish-backed client accused of violating Iranian sanctions from a president who has a one-word policy for dealing with Tehran: sanctions. In the end, Zarrab pleaded guilty. After Erdogan embarrassed Trump last week by attacking Kurdish-held northern Syria, the Southern District announced new charges against a Turkish state-owned bank connected to the gold trader.

But it was Giuliani’s work in Ukraine that crossed whatever invisible line had existed between the former U.S. attorney and federal investigators in the Southern District and placed him at the center of the House impeachment inquiry. The rapidly unspooling narrative connects Giuliani to efforts to dig up dirt on Hunter Biden, presidential candidate Joe Biden’s son, as well as, oust former U.S. Ambassador to Ukraine Marie Yovanovitch, a career diplomat. Yovanovitch testified before the House earlier this month that “individuals who have been named in the press as contacts of Mr. Giuliani may well have believed that their personal financial ambitions were stymied by our anti-corruption policy in Ukraine.”

She was presumably referring to Lev Parnas and Igor Fruman, who were recently indicted on the very same charges that Giuliani once called “not a big crime”: campaign finance violations stemming from their alleged efforts to funnel foreign cash into U.S. campaign coffers. Giuliani acknowledged receiving $500,000 in payments from a company called Fraud Guarantee, where Parnas serves as CEO. Federal investigators have also subpoenaed former Rep. Pete Sessions, R-Texas, for information related to his involvement with Giuliani. Sessions reportedly received a campaign contribution from the Ukrainians and shortly after meeting the men, sent a letter to Secretary of State Mike Pompeo calling for Yovanovitch to be removed from her post. Giuliani, for his part, defied a subpoena from House investigators working the impeachment inquiry.

The volume and speed of the revelations about Giuliani can be daunting to follow. Yet it is worth considering the source. In the Southern District, authorized releases of information on the target of a criminal investigation make for reliable plot points in high-profile cases. It is somewhat ironic that Giuliani now finds himself on the opposite end of such leaks. When he served as Manhattan’s top prosecutor, he changed the tight-lipped culture of the office to one that actively shapes the narrative surrounding investigations. He made such frequent use of fortuitous leaks that judges repeatedly admonished him for talking to the media. As U.S. attorney, Giuliani’s use of the media soured the environment to such an extent that the judge overseeing Giuliani’s final prosecution — of Bronx Democratic boss Stanley Friedman and others as part of a bribery and fraud scandal involving the Parking Violations Bureau — moved the trial to New Haven because of the publicity surrounding it. When former FBI Director James Comey worked under Giuliani as a junior prosecutor in the 1990s, he learned quickly that “the most dangerous place in New York is between Rudy and a microphone.”

Giuliani’s reliance on leaks didn’t stop when he left the Justice Department. In the days leading up to the 2016 election, he relied on leaks originating from the FBI that agents had discovered emails relevant to the Hillary Clinton investigation on Anthony Weiner’s laptop. Those leaks prompted an inquiry by the Justice Department inspector general.

But the leaks surrounding Giuliani’s conduct have so far prompted an incurious response. There is little discussion of their origins or what’s driving them. Former Southern District prosecutors have achieved something of regulatory capture on cable news, podcasts, and in print. Networks rely on these former civil servants to interpret each revelation emanating from their former office’s work in real time. These are some of the same pundits whose laudatory and uncritical appraisal of special counsel Robert Mueller’s capabilities as a federal prosecutor failed to probe the limits of his authority under Justice Department policy, his decision not to depose the president, or the shortcomings of his performance before Congress.

The U.S. Attorney’s Office for the Southern District now faces challenges to be seen as impartial. Many of the line prosecutors in the office served under Preet Bharara, who has emerged as a vocal critic of both Trump and Giuliani. And the office won a conviction against Michael Cohen, demonstrating that one way to adhere to Justice Department policy against charging a sitting president is by pursuing his attorney instead. The office recently filed — and lost — a motion to protect Trump’s tax returns from a state subpoena. Many Southern District alumni expressed outrage, saying that the decision to do so marked a fatal breach of the office’s storied independence. But if you read the fine print, you saw that no attorneys from the Southern District signed the filing.

Federal judges in the Southern District may not fare much better when it comes to being viewed as impartial with regard to Giuliani. When Comey briefly held Giuliani’s job as U.S. attorney, he found that “Rudy’s demeanor left a trail of resentment among the dozens of federal judges in Manhattan, many of whom had worked in that U.S. Attorney’s office.”

If the investigation into Giuliani does take on an outwardly political character, he may ultimately bear historical responsibility for politicizing the prosecutorial culture in the Southern District. The capstone of his tenure as a federal prosecutor was a targeted attack on corruption in the city’s Democratic machine, which many saw as the overture to his political career. Neither Giuliani nor the U.S. Attorney’s office responded to requests for comment.

Giuliani closed his final trial with an appeal to the jury that resonates today.