The gilets noirs took their name from the gilets jaunes, or yellow vests movement. They won’t let migrants be blamed for global inequality. In July, some 700 undocumented migrants, mostly men from Africa, ran into one of Paris’ most famous structures, the Panthéon, and sat down on its stone floor.

Tourists were ushered from the tombs of famous figures in French history — Voltaire, Jean-Jacques Rousseau, Victor Hugo, Marie Curie — and taken outside. For the next hours, under the building’s echoing dome, protesters took turns making speeches and chanting about their right to the famous French values of liberty, equality, and fraternity.

“Why not give us legal status? Why not try to do something for us? Why humiliate us? Why do you ignore us? We are not objects. We are people like you,” one undocumented man said through a microphone as protesters fanned out on the floor around him, waving slips of paper and cheering.

“Our grandparents fought for France. … We’re not hiding anymore,” said another.

The men were part of a new movement called the gilets noirs, or “black vests.” The group of around 1,500 activists began to coalesce early this year, naming themselves after the gilets jaunes, or yellow vests, whose protests against declining prospects for the French working class were rocking the country.

The gilets noirs could not take off their vests if they wanted to.

The gilets jaunes protesters, who have been mostly white, took their name from the fluorescent yellow hazard vests they wore. If the yellow vest is an “ingenious” symbol for its associations with working-class jobs and its universality — French drivers are required to carry the vests in their cars — the black vest is a masterstroke of metaphor. The mostly black activists who make up gilets noirs say they are “black with anger” over the plight of undocumented migrants in France. And they are marked by the color of their skin in a country with a brutal history of colonialism and racism that continues to shape life within its borders.

The gilets noirs, in other words, could not take off their vests if they wanted to. The gilets noirs speak specifically to the conditions faced by France’s migrant underclass, and they represent one of the most visible undocumented migrant movements France has seen in decades. Demonstrators carry a banner that reads “Black Vests seek prime minister. Papers for all” at a gilets noirs protest outside of Sébastien Charléty Stadium on Oct. 11, 2019.

Photo: Emma Francis for The Intercept

Between 300,000 and 400,000 undocumented migrants live in France. In Paris’ north, nearly 3,000 homeless migrants have set up camps alongside highways and in public spaces, enduring a crack epidemic, harassment from police, and extreme poverty. Many of these people were already traumatized by the experiences that caused them to flee their home countries and by the perilous journey to Europe.

The gilets noirs movement was founded, with the help of the activist collective La Chapelle Debout, in a network of communal residences for migrant workers, called foyers. They have staged major demonstrations at the Charles de Gaulle airport — from which people are sometimes deported — and at the headquarters of Elior, a French company that employs undocumented migrants and has contracted to provide food and cleaning services to detention centers in France.

But the occupation of the Panthéon was their most explosive action to date. Around 4:45 p.m. that July day, the gilets noirs were negotiating with police, who wanted them to leave the premises. According to people who participated in those negotiations, police told the gilets noirs that there would be no identity checks and no violence if they left peacefully.

“You can leave as you came. There will be no problems,” a police chief told the group, according to one protester, Diakite, from Mali (The Intercept is withholding the full names of several protesters interviewed for this story, because they fear they will be targeted for deportation if identified). When the gilets noirs stepped out the Panthéon’s back door onto the street, however, the police had surrounded the building. “We found that they had put a trap before us,” said Diakite. More than 500 people occupied the Pantheon on July 12, 2019, as part of a gilets noirs demonstration.Photos: Lahcene Habib/SIPA via AP

According to protesters, whose accounts are corroborated by video footage, police equipped with riot shields, helmets, batons, and body armor charged the crowd of gilets noirs multiple times. One man, Ousmane, told The Intercept he broke his foot jumping over a gate to flee police. Another, Carlos, described being bludgeoned in the throat by an officer before being pushed to the ground as people began to run.

The newsletter La Voix Des Sans Papiers reported that protesters heard the police call them “dirty niggers,” and witnesses also told The Intercept that police appeared to deliberately avoid the white protesters among the group.

Some 50 gilets noirs were sent to the hospital. Thirty-seven were arrested. Of those, 21 were sent to a detention center where migrants are sometimes held before deportation. After some days of pressure, all the gilets noirs who had been arrested at the Panthéon were released. 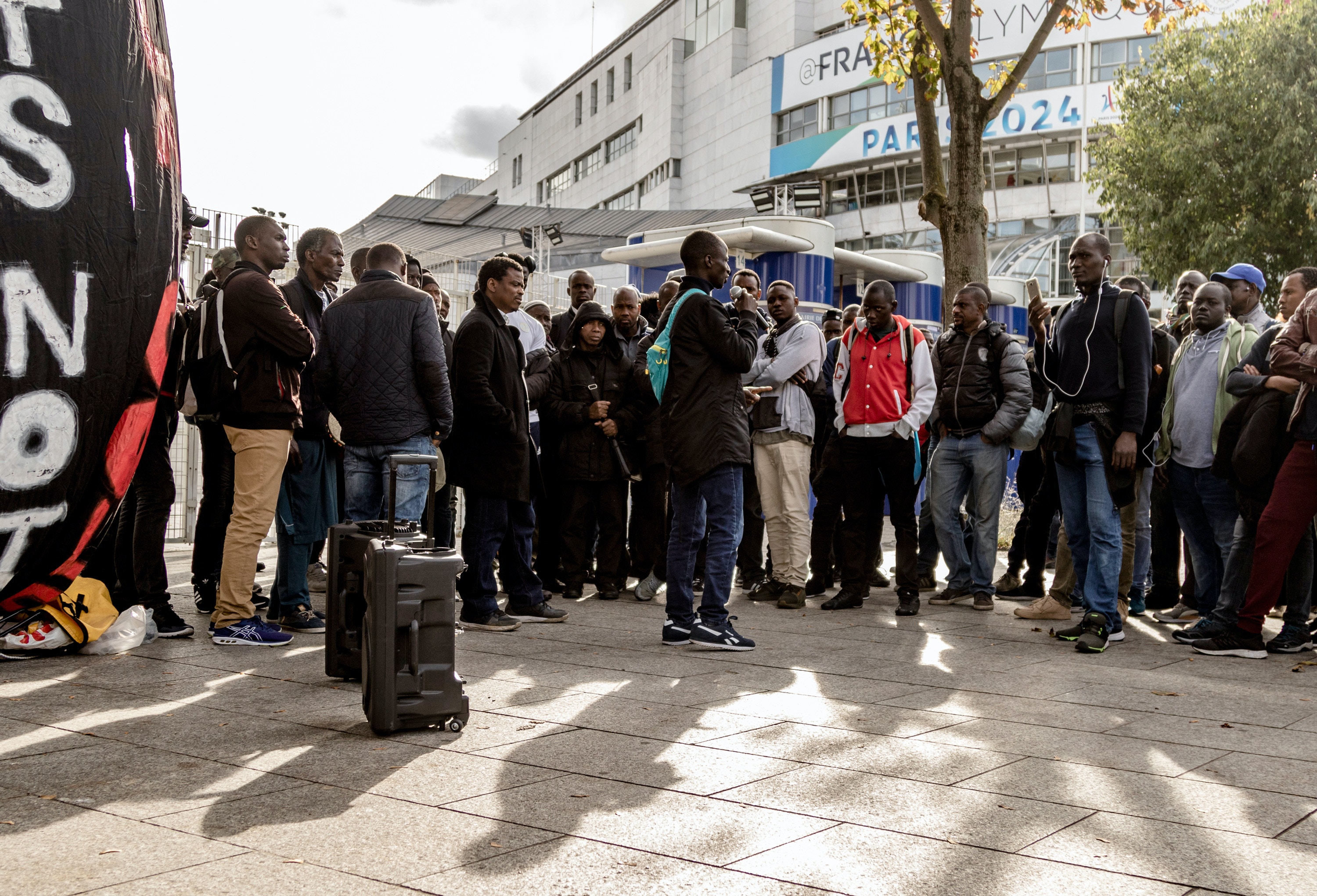 A gilets noirs rally outside of Sébastien Charléty Stadium on Oct. 11, 2019.

Photo: Emma Francis for The Intercept

The gilets noirs, like the gilets jaunes, have emerged in a time of rising global inequality. Miriam Ticktin, a professor of anthropology at the New School, said that outsiders, including migrants, are often blamed for such changes. “A lot of that discourse of insecurity and fear gets taken out on migrants. They’re seen as the scapegoats,” Ticktin said.

French President Emmanuel Macron was elected in 2017 as a centrist reformer, and his government is the “toughest” on immigration that France has seen in recent years, said Cyrille de Billy, secretary general of the French refugee aid organization La Cimade.

Despite a perception that France is absorbing large numbers of foreigners, migrants made up 9.7 percent of the French population in 2018, up only roughly 2 percent since 1975, according to the French National Institute of Statistics and Economic Studies. And France is not among the top 10 nations hosting refugees, either in proportion to its population or in terms of raw numbers, per data from Amnesty International. In 2018, France granted a record number of asylum requests, but it still rejected approximately 71 percent of them, according to the Asylum Information Database.

Macron seems to be building his immigration policy around fears that voters who narrowly elected him in 2017 could shift their support to the party that likely presents the greatest challenge to his reelection: the far-right, xenophobic Rassemblement national, or National Rally party.

“You are not preventing the rise of the far-right, but you might be giving credibility to what it says.”

Last year, Macron’s government introduced a law that reduced the time people have to file asylum applications, shortened the period for appealing rejections, and allowed applicants to be deported while their appeal was pending. The law, which went into effect in September 2018, also doubled the amount of time people can be held in detention before deportation. Members of the RN party voted in favor of parts of the law.

Macron stated early this fall that immigration would be one of the major focuses of the remainder of his time in office. The president stated that he wanted to confront immigration head-on, saying “the Left has abandoned the subject for years.”

“The bourgeois don’t have problems with [immigration]. They don’t encounter it. The popular classes live with it,” he said.

Macron also called for a debate on immigration in the country’s parliament, which was held in early October. During the debate, French Prime Minister Édouard Philippe said that he was “not afraid” of setting immigration quotas. 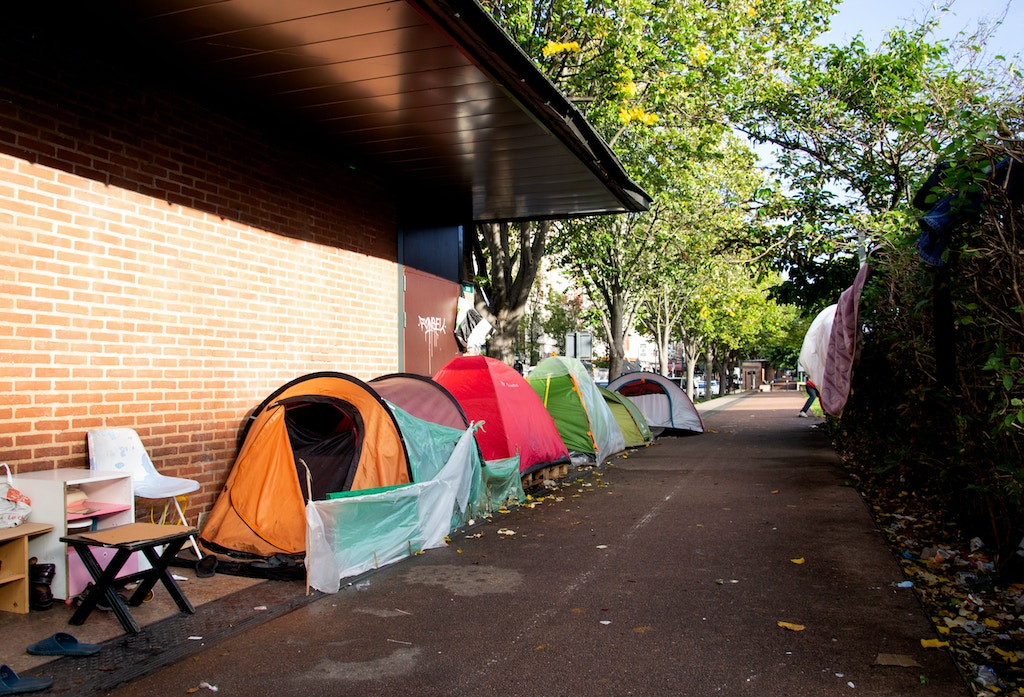 Homeless migrant men set up camps, living in tents in public spaces like this median in the commune of Saint-Denis on the outskirts of Paris.

Photo: Camille Baker for The Intercept

De Billy characterizes Macron’s rightward turn on immigration as a mistake. “You are not preventing the rise of the far-right,” he told The Intercept. “But you might be giving credibility to what it says.”

French Member of Parliament Danièle Obono, one of the few lawmakers who has publicly supported the gilets noirs, called Macron’s agenda “neoliberal” and said he was a person with “very conservative views of the world” who had disguised himself as a progressive. “The immigration debate is for him a way to structure and create a social, ideological electoral base for his policy,” she told The Intercept.

The gilets noirs, meanwhile, say they hope to resume large-scale actions soon. Their current demand is a meeting with the prime minister. In June, through Obono, movement leaders transmitted a letter to Philippe. “We ask you to receive a delegation of Gilets Noirs at Matignon. … We will continue to mobilize and ask for decent housing and papers for everyone,” it reads.

The prime minister has not responded to the letter. After the Panthéon occupation, he tweeted, without addressing the gilets noirs by name, in French: “All the people who gained entry into the #Pantheon have been evacuated. France is a country of law, in all that that implies: respect for the rules that apply to the right to remain, respect for public monuments and for the memory they represent.”

Diakite, the protester, said, “The way that undocumented people are brutalized here in France, for decades, staying hidden, exploited by bosses — [the Prime Minister] wants us to continue like this. He wants us to continue to hide ourselves. We’re not going to stop until he accepts a meeting with us.”