A socialist president from Bolivia is sent into exile as another member of the Latin American left is freed from prison in Brazil. 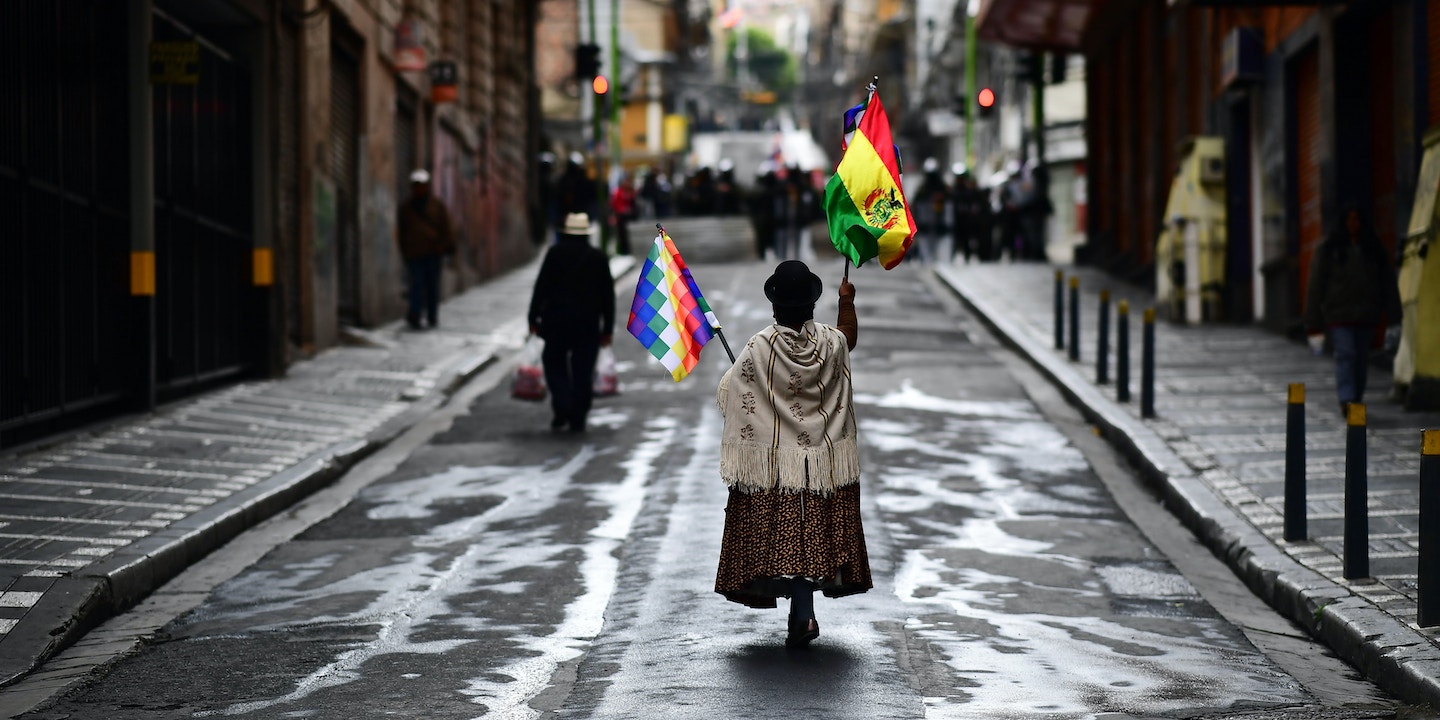 Morales spoke Wednesday from Mexico City, where he is in exile, and expressed interest in returning to Bolivia in the wake of what he has described as a U.S.-backed coup d’etat. At the press conference, Morales encouraged the anti-colonial and anti-imperialist struggle to continue and rejected self-declared interim President Jeanine Áñez. Past anti-Indigenous comments from Áñez, a right-wing Christian, are coming to light, adding to the backlash she already faces from Morales’s supporters. Nonetheless, Áñez has vowed to call for new elections.

U.S. President Donald Trump’s official statement, meanwhile, praised the military coup in Bolivia and noted that the events leading up Morales’s ouster “send a strong signal to the illegitimate regimes in Venezuela and Nicaragua that democracy and the will of the people will always prevail.” What role the U.S. may have played in Bolivia is certainly less clear than the overt attempt at regime change in Venezuela early this year.

Morales’s journey into self-imposed exile marked the end of a remarkable era in Bolivian politics. One of the first Indigenous presidents in the modern Americas, Morales rode a populist wave to power in 2006, when Bolivia’s Movimiento al Socialismo — Movement Toward Socialism, or MAS — rose amid a reshuffling of South American politics to the left in the wake of the Cold War’s end. Part of this “pink tide,” Morales’s 14 years in power saw economic gains for many Bolivians. By 2017, Bolivia’s middle class had grown dramatically, and the country of around 11 million people had the region’s highest growth rate — but at a cost. Deforestation rates in Bolivia spiked, and Morales pivoted to the center while embracing natural gas and mining projects.

The October 2019 election virtually guaranteed trouble for Morales’s presidency long before it took place. Many in Bolivia viewed Morales as being “politically spent,” anthropologist and Bolivia scholar Bret Gustafson told the Intercepted podcast. “The movements had been co-opted by the state. And any dissent within the movements had been silenced,” Gustafson said. “Those who had managed to become a part of the state and party structure remained loyal to Evo Morales.” Morales’s run for a fourth term was unconstitutional, according to the new constitution adopted by Bolivia in 2009. After losing a referendum to allow his candidacy in 2019, Morales approached Bolivia’s Constitutional Court. Declaring that term limits violated Morales’s “human rights,” the court allowed him to run. Then came the race. In the two-round voting system, an election is determined after a candidate wins by 50 percent, or just by 40 percent if the candidate has a 10-point lead over the closest opponent. An outright win in the first round of voting was unexpected.

“The OAS is certainly being questioned, largely because of the role played by the United States and Brazil and Argentina.”

During the vote count, results from the unofficial, preliminary count showed Morales falling short of the first-round victory. Opposition leader and former President Carlos Mesa alleged fraud when, after a tense delay, the newly released official count showed Morales with just over a 10-point lead, easily securing a victory.

Violent opposition protests swept the country and the Washington, D.C.-based Organization of American States conducted an audit. In a statement, the OAS flagged “its deep concern and surprise at the drastic and hard-to-explain change in the trend of the preliminary results revealed after the closing of the polls” — stoking the anti-Morales protests but offering little in the way of concrete evidence of fraud.

“The OAS is certainly being questioned,” Gustafson explained, “largely because of the role played by the United States and Brazil and Argentina” — a coalition of influential member states headed by right-wing governments — “and the very outspoken role that Luis Almagro, the head of the OAS, has had trying to facilitate the ouster of Nicolás Maduro in Venezuela.” Deputy Senate Speaker Jeanine Áñez, center, accompanied by Luis Fernando Camacho, second from left, speaks from the Quemado Palace’s balcony in La Paz, Bolivia, after proclaiming herself the country’s new interim president in a session of Congress that failed to reach a quorum, on Nov. 12, 2019.

Though the role of external forces in the coup remain unclear, even the mere opportunity for the Bolivian right to surge is owed to domestic factors. Namely, support for Morales had eroded even among his most loyal constituencies: Indigenous communities.

Anti-Indigenous racism played a role in the violence. “Camacho is like many on the right wing in eastern Bolivia, who consider themselves white or white-ish,” Gustafson explained. “There is a long history of anti-Indigenous racism and a long history of fascist political organizing in Bolivia that is very much wedded to symbols of Christianity.” Indeed, videos posted to social media showed anti-Indigenous coup supporters burning Bolivia’s Indigenous Wiphala flag and opposition leaders brandishing ostentatious Bibles.

Despite the political chaos of the past month, Gustafson pointed to the strength of Bolivian social movements. “Whatever government emerges out of this, if it takes some ‘neoliberal position’ or attempts to restore the kind of racist model of rule that characterized the country for centuries,” he said, “the social movements in Bolivia are going to give them a really hard time.” 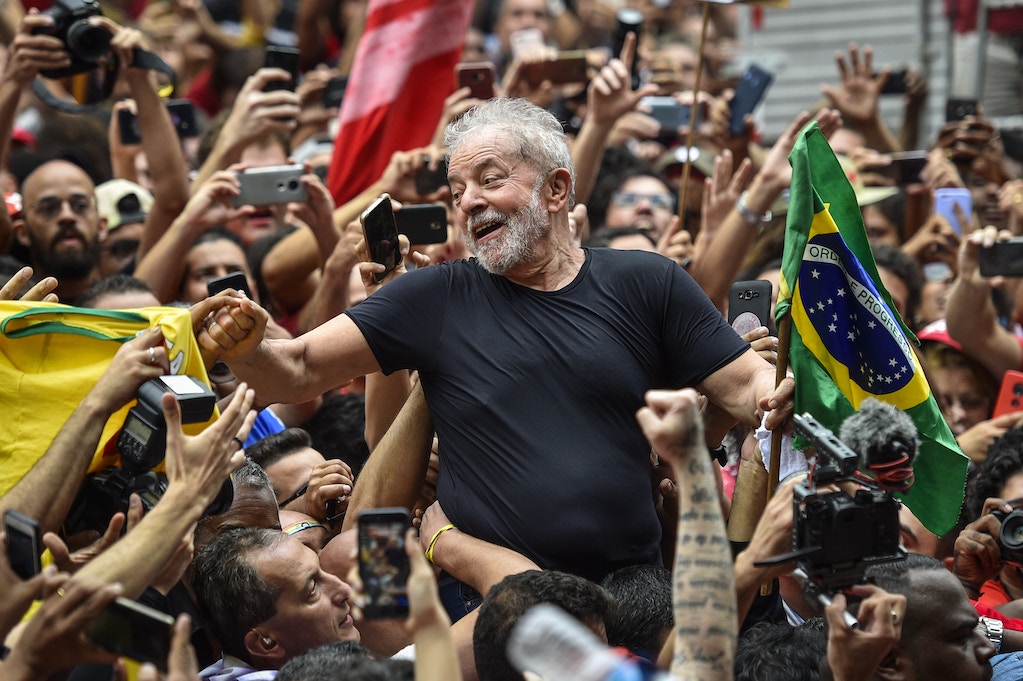 Last Friday, in Brazil, one of Morales’s main Latin American political allies, Luiz Inácio “Lula” da Silva, was released after a year and a half in prison. Lula, a contemporary of Morales’s among the leaders of the resurgent Latin American left, would most likely have won Brazil’s 2018 presidential election. But a disputed, politically-tinged corruption conviction prevented him from running and allowed the right-wing opposition to guide far-right Jair Bolsonaro to victory.

“There was massive corruption inside this anti-corruption probe that has really changed Brazilian politics in a fundamental way over the last five years.”

The judge that presided over Lula’s case, Sérgio Moro, has been at the center of a major investigation by The Intercept. Co-founder Glenn Greenwald explained on Intercepted that, essentially, Moro was not a judge. “He was secretly commanding the prosecutorial task force, not just in Lula’s case, but in many, many others. The prosecutors were constantly violating their ethical constraints, trying to profit off of the fame that they got from winning.” Greenwald said. “There was massive corruption inside this anti-corruption probe that has really changed Brazilian politics in a fundamental way over the last five years.”

Lula returned to the political scene rejuvenated after his release from prison, Greenwald said. Calling Morales’s ouster a coup, Lula tweeted a statement of support for the Bolivian president: “It is unfortunate that Latin America has an economic elite that does not know how to live with democracy and the social inclusion of the poorest.” Bolsonaro, for his part, has dismissed that a coup occurred in Bolivia.

Lula’s statement was one among a global chorus of left-of-center politicians who spoke out against the coup. On Sunday, Rep. Ilhan Omar, D-Minn., tweeted, “There’s a word for the President of a country being pushed out by the military. It’s called a coup.” While many Democratic presidential candidates have remained silent, Sen. Bernie Sanders, I-Vt., tweeted, “I am very concerned about what appears to be a coup in Bolivia, where the military, after weeks of political unrest, intervened to remove President Evo Morales.”

Much of the U.S. mainstream media, meanwhile, has been reticent to call what happened in Bolivia a coup. “I think it’s amazing that U.S. media outlets just explicitly refuse to call it a coup and are going out of their way to say everything but,” Greenwald told Intercepted. “It just shows how in U.S. discourse, ‘democracy’ means putting a leader in place who serves U.S. interest, and ‘tyranny’ or ‘dictatorship’ means a leader — even if they’re democratically elected — who refuses to.”

Correction: November 18, 2019
Due to an editing error, an earlier version of this story described Morales as the first Indigenous president in the modern Americas. In fact, he was among the first: Alejandro Toledo, who was Peru’s president from 2001 to 2006, was from an Indigenous family.