“Are You Sure They Did That?” Even Fox Questions Trump’s Ukraine Conspiracy Theory

The hosts of “Fox and Friends” appear to be losing patience with Donald Trump’s conspiracy theory that Ukraine, not Russia, interfered in the 2016 election. 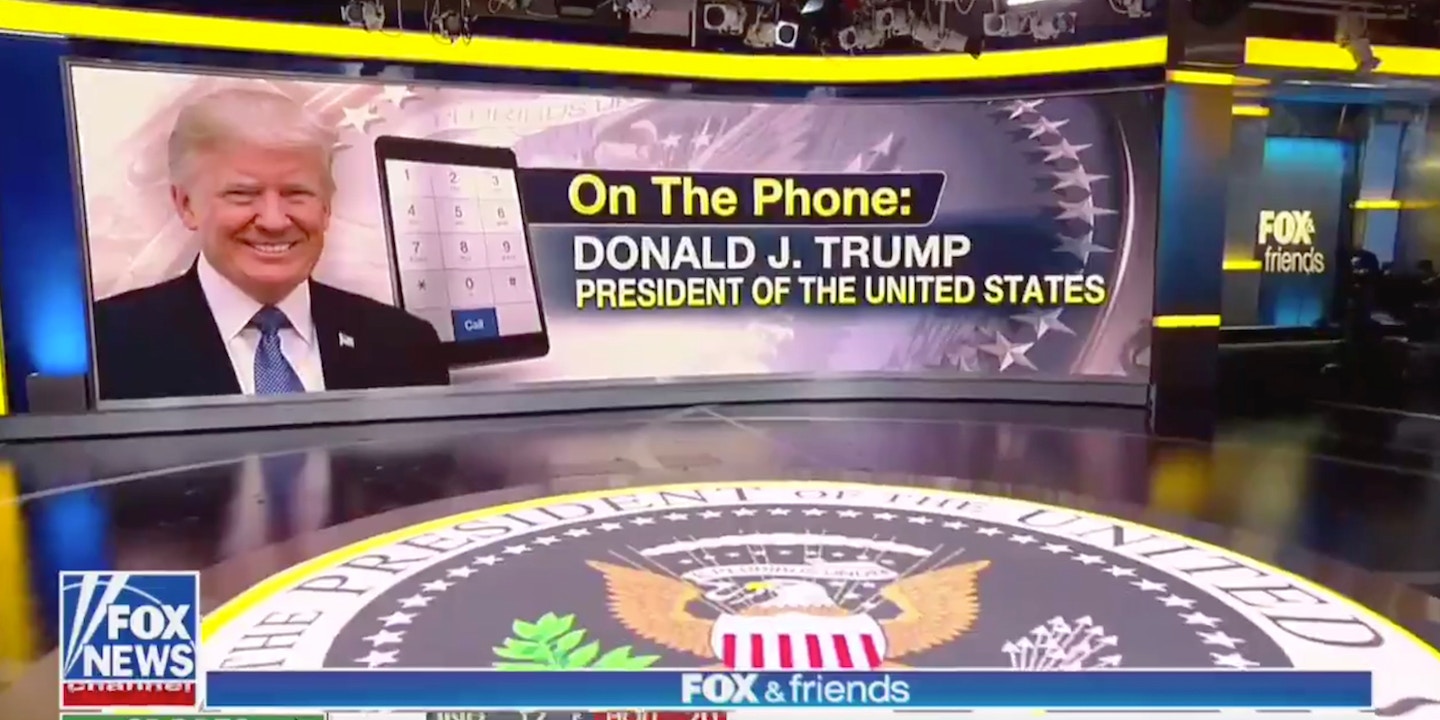 Even Donald Trump’s friendliest audience, the hosts of “Fox and Friends,” appears to be losing patience with his promotion of the conspiracy theory that Ukraine, not Russia, interfered with the 2016 election by hacking and releasing the emails of Democratic officials.

During a nearly hourlong phone interview on Friday morning, when Trump suggested, in the absence of all evidence to the contrary, that Ukraine was involved in both the Steele dossier and the hacking, two of the morning show’s hosts, Brian Kilmeade and Steve Doocy, shifted uneasily in their seats and gently questioned Viewer Number One.

“A lot of it had to do, they say, with Ukraine,” Trump began, before plunging headlong into what his former Russia expert, Fiona Hill, described to Congress the day before as “a fictional narrative that has been perpetrated and propagated by the Russian security services themselves.”

"Are you sure they did that?" pic.twitter.com/F8WuXcy2vv

“These fictions are harmful even if they are deployed for purely domestic political purposes,” Hill added. “President Putin and the Russian security services operate like a Super PAC. They deploy millions of dollars to weaponize our own political opposition research and false narratives.”

Although Republican congressmen and Fox News pundits scolded Hill on Thursday for suggesting that they believe the conspiracy theory — claiming that they were only concerned by anti-Trump statements from Ukrainian officials — Trump made it clear to Fox that he does believe it, suggesting that Ukraine might have framed Russia for the hacking and could still be hiding evidence of that crime.

“They have the server, right, from the DNC, the Democratic National Committee,” Trump asserted, referencing as fact the false and nonsensical rumor that CrowdStrike, the cybersecurity firm that discovered the hacking, had withheld physical evidence of the crime from federal investigators and hidden it in Ukraine.

“Who has the server?” Kilmeade asked, a question Trump ignored as he plowed on with the conspiratorial monologue he has been honing for more than two years.

“The FBI went in and they told them, ‘Get out of here, you’re not getting it, we’re not giving it to you,’” Trump claimed, reciting the fictional narrative. “They gave the server to CrowdStrike, or whatever it’s called, which is a company owned by a very wealthy Ukrainian.” In fact, as the New York Times cybersecurity reporter Nicole Perlroth has explained, “The server is not in Ukraine; it’s sitting in the DNC basement. Despite Trump’s repeated claims Democrats withheld the server from the FBI, Crowdstrike and the DNC actually gave all their forensic evidence to the FBI.”

CrowdStrike, a publicly traded company headquartered in California whose American co-founder was born in Russia, is not in any way a Ukrainian company.

The server isn't in Ukraine. It's here, in this photo, right next to the Watergate cabinet in the DNC's basement. Lest anyone take this as further proof of some conspiracy, know that one of Crowdstrike's other big clients is the Republican campaign arm, the NRCC. pic.twitter.com/i4XjAIYphQ

“I still want to see that server,” Trump continued, undeterred by fact. “You know, the FBI’s never gotten that server, that’s a big part of this whole thing. Why did they give it to a Ukrainian company? Why?”

“Well, that’s what the word is,” Trump said, not specifying why, exactly, he takes the word of unnamed conspiracy theorists over that of the American intelligence agencies that report to him or his own Justice Department, which indicted 12 Russian intelligence officers for the hacking last year.

The idea that the hack was “likely carried by the Ukrainians, not the Russians,” was apparently first voiced inside the 2016 Trump campaign by Paul Manafort, who was forced to resign in August of that year when Ukrainian officials released records of secret payments to him from the party of Ukraine’s ousted president, Viktor Yanukovych.

Just hours after Trump tried to convince Fox News viewers that Ukraine had meddled in the 2016 election, the New York Times reported that “American intelligence officials informed senators and their aides in recent weeks that Russia had engaged in a yearslong campaign to essentially frame Ukraine as responsible for Moscow’s own hacking of the 2016 election.”

This disinformation effort comes as Russian-backed separatists continue to kill Ukrainian troops in the east of the country.

In the “Fox and Friends” interview, Trump also revealed that he believed the apparently false rumor that Marie Yovanovitch, the career foreign service officer he removed as U.S. ambassador to Ukraine following a smear campaign conducted by two recently indicted campaign donors, had refused to put up his portrait in the embassy in Kyiv.

According to Yovanovitch’s legal team, this appears to be yet more evidence that the current president of the United States is incredibly easy to mislead. “The Embassy in Kyiv hung the official photographs of the president, vice president, and secretary of state as soon as they arrived from Washington, D.C.,” a legal source told NBC News.

Hands up, who believes Marie Yovanovitch refused to hang Trump’s portrait in the US Embassy in Ukraine? Is anyone more easily misled than this guy? https://t.co/f84I2qF3lJ

As the Washington Post reported in late 2017, the Trump White House took nearly nine months “to take photographs of the new president and vice president and send them to the Government Publishing Office, the printer of official portraits.” As a result, official portraits “had been conspicuously missing from the lobbies of federal building and office walls, which have been graced by empty picture frames and hooks that until Jan. 20 held the portraits of Barack Obama and Joe Biden.”

A more likely explanation for what Yovanovitch did that angered Trump is that, on her watch, embassy officials declined a visa application from Viktor Shokin, the former chief prosecutor of Ukraine, who had agreed to travel to the United States to help Rudy Giuliani push another fictional narrative — that Biden had abused his power as vice president to shield his son’s Ukrainian employer from prosecution.

State Department documents released late Friday night in response to a Freedom of Information Act lawsuit brought by American Oversight, an ethics watchdog, showed that Secretary of State Mike Pompeo spoke with Giuliani, who helped lead the smear campaign against Yovanovitch, just before the ambassador was recalled to Washington.

Also on Friday, CNN reported that a lawyer for Lev Parnas, the indicted Giuliani associate who helped him interview Shokin by Skype, said that his client wanted tell the congressional impeachment inquiry that he also set up a meeting last December in Vienna between Shokin and Rep. Devin Nunes, the senior Republican on the House intelligence committee.

Updated: Saturday, Nov. 23, 12:45 p.m.
This article was updated to restore missing words accidentally left out when it was published, and to add information about new reporting late Friday night on central figures in the president’s scheme to coerce Ukraine into helping his reelection campaign in exchange for military aid and a White House visit.