Throughout the impeachment process, the president and his allies have repeatedly trashed Ukraine as a hopelessly corrupt swamp unworthy of American aid. 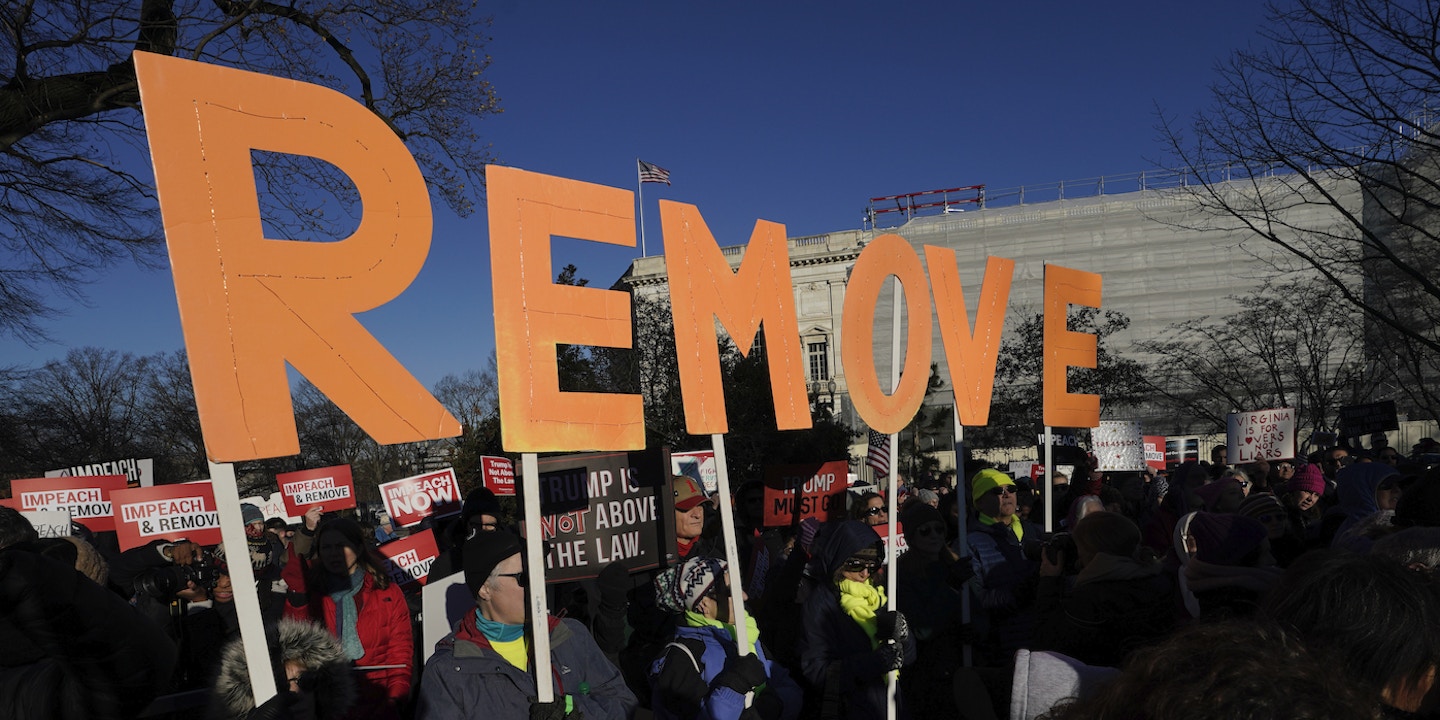 As the House of Representatives voted on Wednesday to impeach Donald Trump for secretly making diplomatic and military support for Ukraine contingent on that country agreeing to subvert its own justice system by opening a politically motivated investigation of Joe Biden, the president and his allies continued to defend his conduct by attacking the victim. One after another, they trashed Ukraine as a hopelessly corrupt swamp unworthy of American aid.

During the hearings that led to the vote, Republicans in Congress even claimed that Trump’s decision to withhold aid was in line with the Obama administration’s prior efforts, led by then-vice president Biden, to stamp out corruption in Ukraine.

Rep. Jim Jordan and Trump himself repeated the Republican talking point that because Ukraine is “one of the three most corrupt countries on the planet,” it was entirely reasonable to test the willingness of the new Ukrainian president, Volodymyr Zelensky, to tackle corruption.

Aid was delayed by just 55 days.

During that time, we verified that President Zelensky was the real deal. pic.twitter.com/TWJbvGj2iz

What neither man mentioned was that the Ernst & Young study ranking Ukraine among the three most corrupt countries was conducted in 2012, two years before Paul Manafort’s client, the notoriously corrupt President Viktor Yanukovych, was forced from office in a popular uprising.

Despite subsequent reforms encouraged by the Obama administration, the country does still struggle with graft, but, as the impeachment inquiry revealed, Trump was fostering corruption in Ukraine, not fighting it.

Diplomats and White House officials testified that Trump had secretly deputized his personal lawyer, Rudy Giuliani, to coerce Zelensky into agreeing to appear on CNN and announce that Biden was suspected of breaking Ukrainian law — or risk forfeiting nearly $400 million in military aid and a White House visit.

A desperate Zelensky, in no position to refuse, was spared that humiliation only by the whistleblower complaint that prompted the impeachment inquiry.

But Trump’s response to the threat of impeachment and removal from office has been to constantly disparage Ukraine and insist that officials there should investigate the baseless rumor that Biden abused his power as vice president to shield a Ukrainian gas firm that employed his son. For good measure, Trump and his supporters in Congress have also claimed that Ukrainian officials who were dismayed by his support for Russia’s annexation of Crimea or outraged by secret payments to Manafort from their corrupt former president colluded with Democrats to sabotage his 2016 campaign.

Perhaps the clearest evidence that Trump and his Republican apologists are not interested in fighting corruption in Ukraine is that their case against Biden relies almost entirely on information provided by a lawmaker who was in the ousted president’s political party and two former prosecutors who spent more time harassing independent anti-corruption activists than holding corrupt oligarchs to account.

These figures, the pro-Russian lawmaker Andriy Derkach and the former chief prosecutors Viktor Shokin and Yuri Lutsenko, all shared elaborate conspiracy theories about Biden with Giuliani during interviews he conducted for the San Diego cable news channel One America News.

Giuliani, who was accompanied on his trip to Ukraine by Chanel Rion, a far-right Republican operative and conspiracy theorist who has reinvented herself as an OAN host, seemed willing to ignore obvious contradictions in the stories told by the three men — including the bizarre claim that Shokin, the prosecutor Biden pressed to have fired in late 2015 for failing to pursue corruption cases, was recently poisoned with mercury and “died twice and had to be resuscitated.”

Derkach was praised by Rion for his staunch opposition to Ukraine’s independent National Anti-Corruption Bureau, which was set up with support from the United States and disclosed the records of secret payments to Manafort in 2016, leading to his resignation from the Trump campaign.

The most revealing moment in Giuliani’s OAN report, however, was the interview with Shokin’s successor, Lutsenko, who took over in 2016 promising to investigate corruption. Lutsenko told Giuliani and Rion that he was affronted when Ambassador Marie Yovanovitch, the career foreign service official who took over as U.S. ambassador to Ukraine in 2016, pressed him to close an investigation and mentioned three Ukrainians by name whom he should not prosecute.

Enraged by the request, Lutsenko said that he took out a piece of paper and made a list with the three names: “Kasko, Leshchenko, Shabunin.” He then theatrically tore up what he called a Do Not Prosecute list. In another account, Lutsenko compared the request from the U.S. ambassador to the sorts of lists of protected people that used to be circulated in Soviet times. 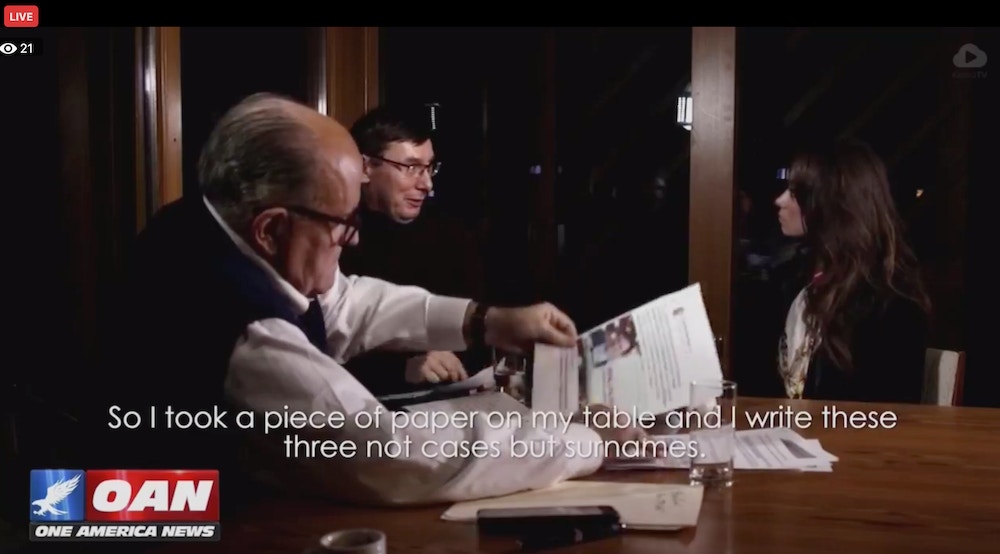 A screenshot from a One America News interview of former Ukrainian prosecutor Yuri Lutsenko by Rudy Giuliani and Chanel Rion.

However, what Lutsenko failed to explain to Giuliani and OAN viewers is that those three men were all noted anti-corruption activists who were, at the time, the subject of politically motivated investigations or harassment by the chief prosecutor’s office. Vitaliy Kasko is a former deputy prosecutor who resigned in 2016 and accused Shokin’s office of being a “hotbed of corruption.” Sergii Leshchenko is a Ukrainian investigative journalist who was elected to parliament after the uprising, and displayed pages from the so-called black ledger detailing secret payments to Manafort at a news conference in Kyiv in 2016. Vitaliy Shabunin is a co-founder, along with Daria Kaleniuk, of the Anti-Corruption Action Centre, a nonprofit partly funded by the U.S. government. Shabunin has faced what Kaleniuk calls “a series of well-planned attacks from various corrupt officials and oligarchs” in retaliation for his efforts to expose corruption and demand transparency.

The Wall Street Journal reported last month that the case Yovanovitch asked Lutsenko to drop was an investigation of Shabunin and Kaleniuk’s nonprofit, known as AntAc. Kaleniuk, an American-educated lawyer, told The Intercept in May that state prosecutors investigated a grant from the U.S. to the nonprofit simply because they were jealous that the funds to combat corruption had been awarded to the activists instead of the chief prosecutor’s office.

In early September, near the apex of the pressure campaign on Zelensky, Kasko was appointed first deputy to Ukraine’s new chief prosecutor. Leshchenko, who was an adviser to Zelensky until Giuliani attacked him by name in a Fox News interview for supposedly convincing the new president not to meet with him, has returned to journalism full time and stands by his contention that the records of Manafort’s financial crimes he publicized are genuine.

“We are desperately trying to change the country … from a very corrupt kleptocracy to a democracy,” Kaleniuk told the Los Angeles Times last month. “This is Ukraine’s moment, the moment to help. And instead, we got a knife in the back.”