For every homeless person in Oakland, there are four empty homes. Many are owned by a subsidiary of home-flipping giant Wedgewood Properties. 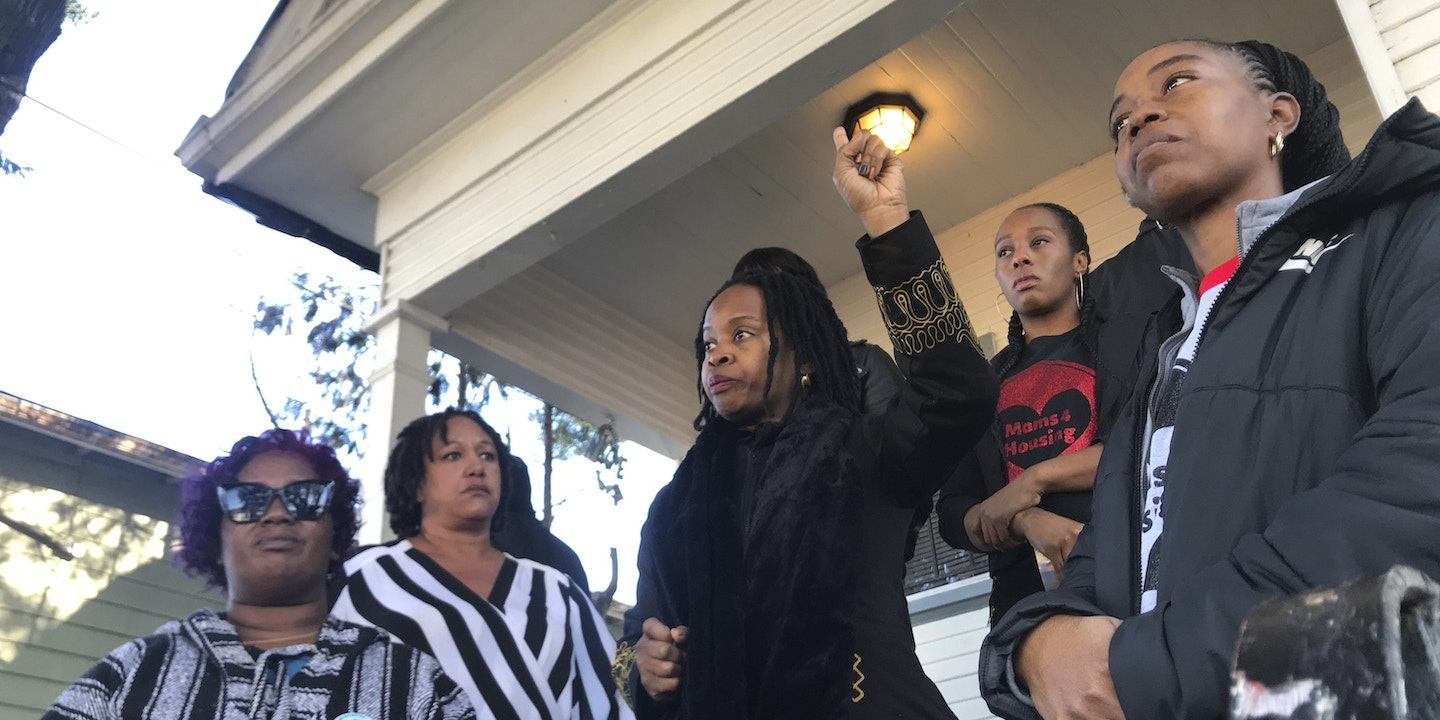 The California company that evicted a group of homeless mothers from a West Oakland, California, home this week is the force behind a sprawling national home-flipping operation. Through a related entity, the company, Wedgewood Properties, also benefited from a controversial government program to offload distressed, federally insured loans to investors.

Early Tuesday morning, sheriff’s deputies evicted the group Moms 4 Housing, who were occupying a foreclosed, investor-owned home in West Oakland. In November, the four women and their children moved into a home that had sat vacant for two years, rallying community support for their fight against real estate speculators they accused of exacerbating the area’s housing crisis.

“There are four times as many empty homes in Oakland as there are homeless people,” said Sameerah Karim, one of the mothers, at a press conference outside the home in November. “Why should anyone, especially children, sleep on the street while perfectly good homes sit empty?”

This week, after the mothers lost a court battle to stay in the home, the Alameda County Sheriff’s Department descended with armored vehicles and AR-15 rifles, arresting two of the women and two of their supporters. It recalled the housing standoffs that grabbed headlines in the years following the 2008 housing market crash, as groups like the Occupy movement took over vacant, foreclosed houses.

But where housing activists once faced off against major banks, they’re increasingly coming up against faceless corporations operating with even less transparency. The West Oakland home occupied by Moms 4 Housing was purchased at a foreclosure auction by a subsidiary of Wedgewood Properties, a home-flipping giant that does business nationwide through an alphabet-soup of companies such as HMC Assets LLC and FI-337 LLC.

Wedgewood did not respond to a request for comment. But after the company prevailed in court against the mothers, spokesperson Sam Singer issued a statement celebrating the ruling. Singer also chastised three Oakland City Council members who tried to negotiate a deal to sell the home to an affordable housing land trust, thereby allowing the mothers to stay.

“The solution to Oakland’s housing crisis is not the redistribution of citizens’ homes through illegal break-ins and seizures by squatters,” said Singer, adding that the three council members “must take real steps to address Oakland’s drug abuse, mental illness, and homeless issues.”

Wedgewood has filed hundreds of eviction cases in the Bay Area and has been sued at least three times for wrongful eviction; two suits ended in settlements, while a third is still active. Wedgewood’s sprawling operation epitomizes a major shift in the housing market, which is increasingly dominated by anonymous owners operating through a web of shell companies. More than 3 million homes and 13 million apartment buildings are owned by LLP, LC, or LLC entities, according to 2015 census data, business structures that do not mandate naming owners or investors.

Most states no longer require limited liability companies to disclose their owners, making them an attractive vehicle for “individuals who wish to own real estate but want to be able to hide their identity,” said Susan Pace Hamill, a University of Alabama Law professor. That often poses a major problem for tenants trying to figure out who exactly is evicting them, or cities that want to go after the owner of vacant properties in disrepair.

In 2018, The Guardian exposed conservative TV host Sean Hannity’s multimillion-dollar property empire, which he assembled via dozens of shell companies with names combining the initials of his children’s names. And a series of New York Times investigations in 2015 and 2016 chronicled how in New York City, limited liability companies were being used to launder money and defraud struggling homeowners.

The aftermath of the foreclosure crisis offered an unparalleled opportunity for institutional investors. Operating through a maze of subsidiaries, they flooded the housing market to buy up cheap, foreclosed homes nationwide. In Atlanta, the private-equity giant Blackstone bought 1,400 homes in a single day in 2013.

In many cases, federal policies enabled the investor feeding frenzy. After largely failing to aid homeowners at risk of defaulting, government-backed mortgage entities auctioned tens of thousands of distressed loans that they wanted off their books. The program was supposed to give borrowers a last shot at hanging on to their homes, but the hedge funds and private-equity firms buying loans were often quick to foreclose, as a 2015 New York Times investigation detailed. Community organizations labeled the programs a “Wall Street giveaway” and staged a series of protests, winning reforms in 2016 that made it easier for nonprofits to purchase the loans.

But much of the damage had been done. Of more than 100,000 loans sold through the programs, the majority ended up in the hands of just four large investors. One of them, HMC Assets, purchased loans from the Department of Housing and Urban Development, Fannie Mae, and Freddie Mac using a series of special-purpose entities. In 2014, HMC Assets merged with Wedgewood.

“We want speculators out of our community. They’re coming in, they’re profiting off harm that’s done in our community, and we want them out.”

The result of these government loans sales was the rapid concentration of ownership in many communities hard-hit by the foreclosure crisis, noted a 2017 study in the NYU Journal of Legislation and Public Policy.

In the Bay Area, an investigation by the local NBC affiliate found 98 active LLCs linked to Wedgewood. Through them, it’s been involved in thousands of property transactions and more than 300 court cases, mostly evictions, since 2015. A monopoly board renamed “Wedgewood” is affixed to the wall of the company’s Redondo Beach headquarters.

California housing activists first faced off against Wedgewood in 2016, when they supported an immigrant couple attempting to buy their home of 10 years back from Wedgewood. The couple said their lender sold the home at auction while they were attempting to negotiate a loan modification, a practice known as dual-tracking. The couple was ultimately evicted.

A pending lawsuit in Dallas County, Texas, tells a similar story. The plaintiff, who purchased her home in 2006, claimed that she had a pending loan modification when her home was sold to a Wedgewood subsidiary without the required legal notice. There are at least 500 deed records tied to Wedgewood LLCs in Dallas County.

The full scope of the company’s activities are exceedingly difficult to trace, but entities related to Wedgewood operate in at least 18 states, according to the NBC investigation.

The Moms 4 Housing protest in Oakland is over for now, but the organizers are looking to build a larger campaign against the kind of harmful actors they say Wedgewood exemplifies.

“We want speculators out of our community,” Dominique Walker told reporters on Monday. “They’re coming in, they’re profiting off harm that’s done in our community, and we want them out.”