“I suspected from the beginning that I would end up here,” psychologist James Mitchell told a Guantánamo Bay courtroom. 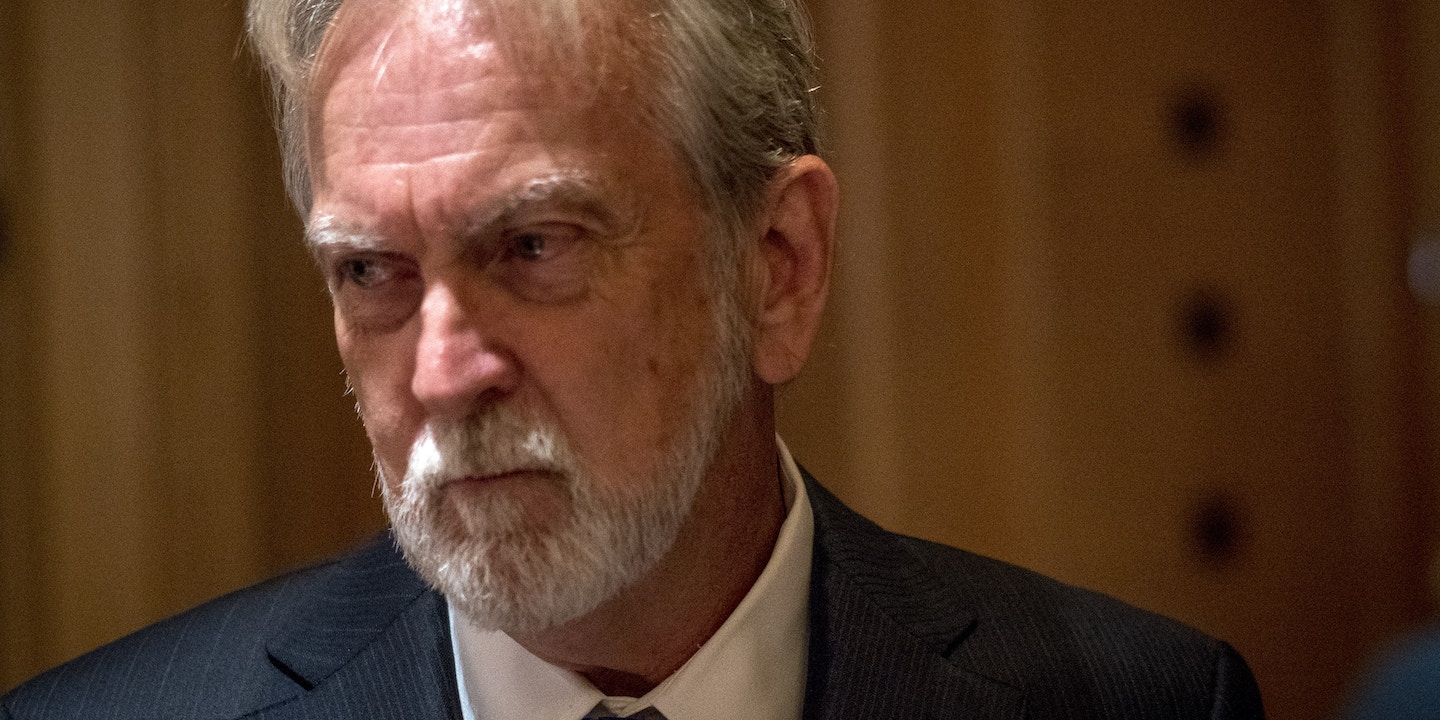 A psychologist who helped to design and execute the CIA’s “enhanced interrogation techniques” testified in open court for the first time on Tuesday in connection with the trial of five men accused of planning the 9/11 attacks.

“I suspected from the beginning that I would end up here,” James Mitchell told a Guantánamo Bay courtroom. Dressed in a charcoal suit and bright red tie, Mitchell stated that although he could have testified over a video link, he had chosen to come in person. “I did it for the victims and families,” he told James G. Connell III, an attorney for Ammar al-Baluchi, one of the accused plotters. “Not for you.”

He added: “You folks have been saying untrue and malicious things about me and Dr. [Bruce] Jessen for years.”

Mitchell and his colleague Jessen were previously questioned in videotaped depositions in a civil case, but the proceedings underway at the military court complex in Guantánamo represent the first courtroom appearances by the two psychologists as witnesses. On Tuesday, the accused architect of the 9/11 attacks, Khalid Sheikh Mohammed, sat just yards from the men who waterboarded him 183 times in a CIA black site in Poland in March 2003.

The topic of Tuesday’s hearing was a motion to suppress statements made by the 9/11 defendants while they were being held in detention, even after they were brought from the CIA’s black sites to Guantánamo. The defense attorneys allege that the statements the men made at Guantánamo were not voluntary because of the profound impact of their prior torture, which was overseen by Mitchell and Jessen.

The torture techniques, approved by the George W. Bush administration, were used by the CIA as part of the rendition, detention, and interrogation program from 2002 to 2008. These methods, including waterboarding, were designed to “condition” prisoners to provide information to interrogators and debriefers.

The CIA renounced the harsh interrogation techniques in 2009, and the Senate’s torture report later found that the program was a violation of U.S. and international law that failed to generate usable information for counterterrorism operations.

Mitchell and Jessen ran a contracting company that provided interrogators and security personnel to the CIA program at a cost of $81 million over several years. During that time, the psychologists personally conducted interrogations, trained interrogators, participated in debriefings, and observed interrogations.

In 2015, the American Civil Liberties Union sued the pair in federal court in Spokane, Washington, on behalf of two former detainees, as well as the family of another prisoner who died in custody at a black site. The two psychologists provided testimony in that case, which was settled out of court in 2017. The terms of the settlement remain confidential. In a joint statement released by the parties, Mitchell and Jessen acknowledged “that they worked with the CIA to develop a program … that contemplated the use of specific coercive methods to interrogate certain detainees,” but asserted that the abuses occurred without their knowledge or involvement and that as a result, they were not responsible.

Mohammed’s co-defendants Walid bin Attash, Ramzi bin al-Shibh, Mustafa al-Hawsawi, and Mohammed’s nephew Baluchi also endured torture techniques proposed by Mitchell and Jessen, and they, too, were present in the courtroom on Tuesday. There were no audible reactions from the defendants during the morning testimony, which is expected to continue through next week.

Questioning on Tuesday morning focused on Mitchell’s 2016 book “Enhanced Interrogation,” written with former CIA chief spokesperson Bill Harlow, in which Mitchell vehemently objects to the findings of the Senate’s 2014 torture report. In a bizarre twist, the book contains information that defense attorneys in the 9/11 case may be barred from using under a new “classification guidance” delivered by the government last Thursday and revised Tuesday morning.

The guidance — which is itself classified — contains a restriction on presenting information deemed a threat to national security. For example, although the names of countries where black sites were located are now known from books and European court proceedings, they cannot be mentioned in the courtroom at Guantánamo.

Mitchell proved an antagonistic witness. He confirmed that his book had undergone an intensive pre-publication review by the CIA and the Department of Defense, and said that prior to the new restrictions, no one had suggested that he had disclosed classified information. The book has sold 40,000 to 50,000 copies, Mitchell estimated.

When asked what his reaction would be to the claim that the information in his book could harm national security, he responded, “My reaction would be: Buy the publication rights and take it off the market.”

Separated by a curtain from the press and observers from nongovernmental organizations, relatives of 9/11 victims could be heard voicing their agreement with some of Mitchell’s testy responses.