A New Book Takes on the Problematic Academic Discipline of “Jihadism”

“The discourse on jihadism has a misguided focus on individuals,” says Darryl Li, author of “The Universal Enemy.” As long as there have been wars, there have been people volunteering from distant lands to join them. Over most of the 20th century, the typical volunteer foreign fighter was a left-wing activist fighting for the cause of international socialism. During the Spanish Civil War, tens of thousands of foreign volunteers took up arms on the side of the republicans, among them a young George Orwell. A romantic image of the idealistic foreign rebel became a familiar archetype in popular culture, celebrated in literature and film.

By the 1990s, the picture had shifted. The Cold War was over and left-wing internationalist movements were in terminal decline. To be sure, the world was still wracked with crises and injustice which were crying out for remedy. Yet the ideologies people used to mobilize to address them began to change. Into the void created by the decline of the left stepped a new language of political solidarity: one based on identity and religion.

This change has had the most serious consequences in Muslim-majority countries, many of which are still grappling with the traumas of dictatorship, military occupation, and economic injustice. As once-powerful leftist movements in these countries faltered, they were replaced with political movements drawing solidarity from religious identity. There has also been the emergence of a new type of volunteer foreign fighter: the mujahid, a Muslim fighter engaged in a religious struggle — or militant jihad. This controversial figure is the focus of a new book, “The Universal Enemy: Jihad, Empire, and the Challenge of Solidarity,” by Darryl Li, an assistant professor of anthropology and social sciences at the University of Chicago. The book is an anthropological study of a group of veteran foreign fighters who volunteered in Bosnia in the war of the early 1990s. Li’s research takes him across the world to meet former mujahids: from coffee shops and offices in Saudi Arabia and the United Kingdom to remote detention centers where many of them found themselves trapped amid the U.S.-led global war on terrorism.

All of them can be said to have been involved in a collective political project — in this case, the defense of Bosnian Muslims facing genocide — as opposed to the atomized mass shooters and truck attackers often seen in recent years. Li reconstructs the motives and experiences of these volunteer fighters with a diligence often missing in other accounts. But his book also stingingly criticizes the field of “jihadism” as an academic discipline connected to the national security state.

“The heart of the problem is the refusal to recognize the participants in these conflicts as political actors.”

“Jihadism is simply not a useful term for understanding political violence,” Li told me when we spoke about the book recently. “Believers will debate in the terms of their tradition whether something is properly considered a jihad. But separately anyone can see that Muslims use this term for vastly different kinds of struggle they deem religiously justified — which could range from an inner personal struggle to a violent political one. Even when we’re talking about jihad as an armed conflict, there are such different types.”

“The heart of the problem is the refusal to recognize the participants in these conflicts as political actors,” Li said. “We just suck all the politics out, latch on a word like ‘jihadism,’ and then place it into a category of evil existing outside of space and time.”

The study of jihadism generally takes for granted that organizations like Hezbollah, Hamas, the Islamic State, al-Shabab, the Afghan Taliban, and various Iraqi Shia militias should be grouped under one category. This grand category also happens to include solitary individuals engaged in acts of violence not directed by any organization. Huge disparities of geography, language, sect, and politics are more or less ignored in favor of a narrative understandable through the single term of “jihadism.”

“Consider for a moment three different things: the Irish Republican Army, the Republican Party in the United States, and Plato’s Republic,” Li told me, by way of analogy. “All of these employ the term ‘republic,’ and all of them somehow have a connection with violence. If you lumped them together and claimed they represent an ideology called ‘republicanism,’ that obviously wouldn’t make any sense. Yet that’s what the category of ‘jihadism’ essentially does.”

The jihadism field has also suffered from some personnel issues. A massive influx of money and resources in the years after the September 11 attacks helped create a new class of self-styled terrorism expert. Some of these individuals were driven by strong ideological motives; many could be frankly described as charlatans. Over the past decade, however, the quality of the average analyst in this field has notably improved. Many of those studying militant violence today do so with a level of nuance and academic rigor rarely seen in earlier years. Generally speaking, it is no longer widely acceptable for terrorism experts to be openly racist.

Despite these welcome improvements, some problems remain. New knowledge inevitably tends to build on what already exists. Thus, bad ideas carried over from previous generations of experts still exert an influence. One already-discussed example is the dubious academic category of jihadism itself. Another is the resilient assumption that militant violence can be understood as a kind of personal pathology, rather than as a political phenomenon.

“The discourse on jihadism has a misguided focus on individuals, particularly the idea that a meaningful understanding of political violence can be found by getting inside their heads,” Li said. “If you took a random sample of the motivations of U.S. military service members, you would probably find that some believed in their mission, some just needed a job, and some were sadists who wanted to kill people. But you couldn’t go directly from analyzing the mindsets of individual soldiers to understanding the political goals or causes of the U.S. wars in Iraq and Afghanistan.” 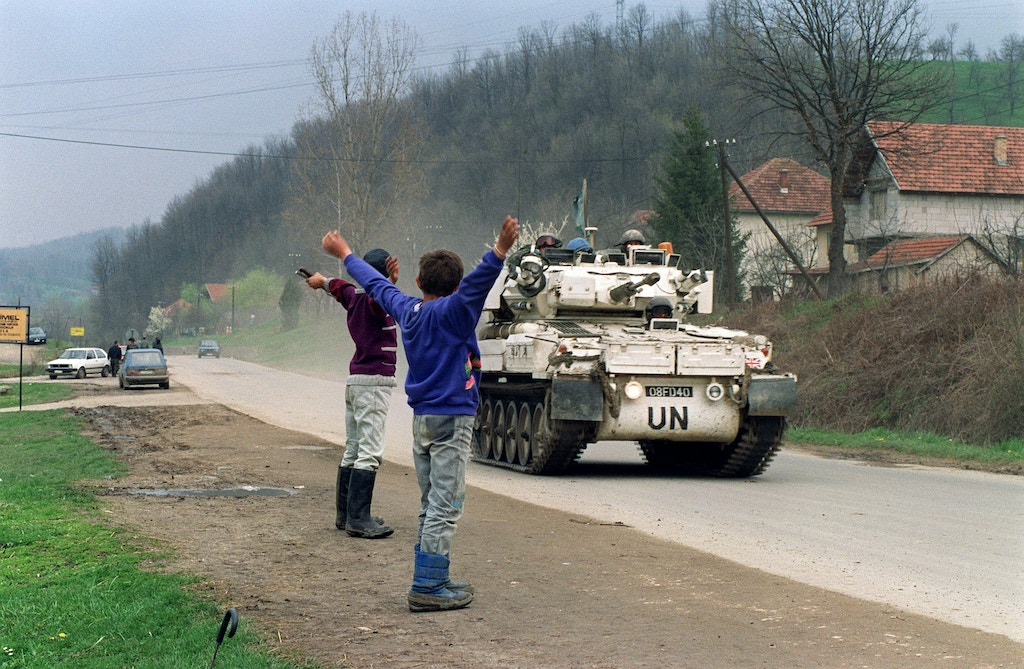 Two Bosnian boys salute a convoy of Canadian blue helmets near Tuzla, Bosnia, on April 17, 1993, as they depart for the Muslim enclave of Srebrenica, where some 30,000 refugees hope to be evacuated.

“The Universal Enemy” focuses on a particular period during the early 1990s war and genocide in Bosnia, when foreign fighters began arriving in the country. Several hundred volunteers came to fight on the side of the predominantly Muslim Bosniaks, while a comparable number joined the Bosnian Serb forces. But the biggest contingent of armed foreigners in Bosnia by far came in the form of a large United Nations peacekeeping deployment that arrived early in the conflict.

In a way, the U.N. peacekeepers came to Bosnia for reasons not so different from the foreign volunteers who called their cause a “jihad.” Acting on behalf of a supposed “international community,” the peacekeepers bore arms under the banner of values that they proclaimed as universal and applicable to all of humanity. Many also happened to be Muslims. Some of the veteran peacekeepers that Li met in Islamabad, years after the Bosnian war, demonstrate that they saw no conflict with upholding two universal ideas at the same time: the defense of liberal values and their duty to aid oppressed coreligionists.

“People who invoke jihad are not necessarily any less brutal, callous, or hypocritical than other violent actors.”

Throughout the book, Li lets his subjects speak for themselves and casts few judgments. The picture that emerges is a morally complex one. It is clear that some volunteer foreign fighters do act nobly, making great personal sacrifices to relieve the burdens of suffering people. At the same time, others act like adventure seekers, colonialists, or simply sadists seeking opportunities for violence. Most mujahid foreign fighters today also happen to be enamored with a retrograde vision of politics and religion. Their project offers little to non-Muslims, while generally excluding women from meaningful roles. Some fighters, as Li’s book documents, have committed war crimes or been accused of sexual exploitation.

Despite this, the perception of foreign fighters as radically evil by default — something like modern equivalents of pirates or highwaymen — tends to exaggerate differences between them and other combatants.

“People who invoke jihad are not necessarily any less brutal, callous, or hypocritical than other violent actors, and there is no shortage of things they can be condemned for. But there’s a world of difference between criticism and dismissal,” Li said. “Criticism requires spelling out some criteria and accepting that those criteria should apply to others too, including oneself. Dismissal is a refusal to think, it’s condemnation that doesn’t submit itself to standards or scrutiny.”

The question of how to judge nonstate armed actors is likely to become more urgent in the coming years. Three decades after the fall of the Berlin Wall, the world is entering a period of uncertainty and instability not seen since the era leading up to World War II. It is now easy to imagine a future in which the need for collective self-defense becomes a pressing issue for millions around the world, of all backgrounds, who lack control over powerful states and access to institutions. Similar circumstances led Orwell to take up arms in Spain in the 1930s and, in more recent years, have motivated foreigners to join Kurdish militant groups fighting in the Syrian civil war.

In the future, there might be something to learn from movements of all stripes that, despite deep flaws, have succeeded in drawing people into solidarity across racial, linguistic, and geographic boundaries — even to the extent of taking up arms and risking their lives on others’ behalf.

“As we go through this process of a great unraveling, with the massive post-World War II political consensus breaking apart, we are going to have to think more and more about popular forms of self-defense,” Li said. “We are in a stronger position to do that if we’re not just isolated and divided into different communities. We can’t assume that because someone is foreign or came from far off to join a conflict that it is impossible to develop a meaningful relationship of accountability with them.”