In late January, on the same day that the U.S. Supreme Court’s landmark Roe v. Wade decision marked its 47th anniversary, Texas got news from the federal government that it would be allowed to receive millions in Medicaid funding to support a family planning program that discriminates among providers — the same strategy that in recent years likely caused a rise in unintended pregnancies.

“The Lone Star State is once again in partnership with the federal government to provide meaningful family planning and health services while fostering a culture of life,” Gov. Greg Abbott said of the deal, which will make $350 million available to the state over the next five years. “This collaboration is a symbol of our commitment to championing the lives of Texas women.”

At issue is Texas’s long-standing quest to avail itself of federal taxpayer funds to provide contraceptives and basic reproductive care to low-income, uninsured women, while also barring those women from choosing to seek services at Planned Parenthood or other clinics the state believes “affiliate” with abortion providers.

Medicaid rules require that patients in the federal fee-for-service program be able to access care from any qualified and willing provider — a long-standing provision designed to ensure choice when it comes to family planning and gynecological services. Texas disapproves of that rule and for years has sought to have it waived. The federal government’s announcement on January 22 gave Texas that permission — and, advocates for women’s reproductive health care fear, may now provide an avenue for other states to follow Texas’s lead. The federal government has never before allowed the provider-of-choice rule to be waived for a family planning program.

“The bottom line here is that the government is once again putting ideology ahead of patient needs,” said Robin Summers, senior counsel and vice president of health care strategy and analysis for the National Family Planning and Reproductive Health Association. “You’re supposed to be focused on furthering patient access, improving patient health. And that just doesn’t seem to be what is at the top of the priority list right now.”

Texas has the highest rate of uninsured people in the country: nearly 18 percent. Even more abysmal, nearly 26 percent of women of reproductive age are uninsured — more than double the national average. This problem is exacerbated by stringent Medicaid requirements; parental income above $302 per month is enough to render a family of three ineligible for the program. Not only has the state refused to expand Medicaid under the Affordable Care Act, but it is also leading the charge to have the ACA ruled unconstitutional.

The kind of Medicaid waiver program that the feds approved for Texas generally allows states to opt out of certain rules in favor of innovation in health care delivery. In the mid-2000s, Texas did just that when it asked to waive financial eligibility rules in order to expand access to reproductive health care for women not poor enough to qualify for Medicaid unless they were pregnant.

Known as the Women’s Health Program, the pilot got off the ground in 2007 and expanded rapidly. In 2008 alone, the program reduced the number of unintended pregnancies that Medicaid would have paid for by more than 10,000, saving taxpayers more than $92 million. By the end of 2011, nearly 130,000 clients had enrolled in the program, with 90 percent of them accessing services. It was a clear success.

Still, Republican state lawmakers were determined to defund Planned Parenthood from all state programs by any means necessary. At the time, Planned Parenthood was serving more than 40 percent of Women’s Health Program clients, making it the single largest provider. State lawmakers came up with a new rule that would bar any group “affiliated” with an abortion provider from participating in the program. The federal government balked and said that if the state did not remove the ban, it would not reauthorize federal funding for the waiver program.

So Texas pulled out of the federal deal, rebranded the Women’s Health Program, barred Planned Parenthood, and funded the program solely with state money. It hasn’t exactly worked out. The program, now known as Healthy Texas Women, floundered for years with enrollment steadily declining — down to an average monthly enrollment of 94,851 by fiscal year 2016. The state subsequently launched a concerted outreach campaign and enrollment increased, up to 244,153 in 2018. Still, the percentage of patients served has continued to lag; in 2018, roughly 70 percent of enrolled clients actually accessed services. This is at least in part due to the fact that while the state signed up thousands of potential providers after ousting Planned Parenthood — including individual doctors’ offices — a majority of them haven’t served any clients. In 2018, according to the state’s Health and Human Services Commission, just 10 percent of providers enrolled in the program billed for services provided.

Moreover, research from the Texas Policy Evaluation Project at the University of Texas’s Population Research Center found that after the state bounced Planned Parenthood (and other smaller providers) from the program, the number of women receiving long-acting reversible contraceptives — the most effective forms of birth control — decreased by 35 percent. The number of women receiving injectable contraceptives declined by 31 percent, while Medicaid-paid births among this cohort increased by 27 percent. In other words, the policy decisions made by Texas lawmakers likely increased the number of unintended pregnancies, one of the health outcomes the program aimed to reduce.

Ultimately, what the state has demonstrated is that you cannot eliminate the network’s highest-capacity provider and also maintain services, let alone increase them. “The capacity was yanked out of the system. There’s no question about what happened,” said Stacey Pogue, a senior policy analyst for the Center for Public Policy Priorities in Austin. The state said “they could kick out Planned Parenthood and that everything would be the same. And there was a mountain of evidence over time showing that was not true.”

This is what makes the federal government’s approval of the waiver request puzzling. If the Medicaid waiver is meant to encourage innovation in the system as a means to increase access and positive health outcomes, Texas’s program has already demonstrated that it has not done that.

According to the approval letter from the U.S. Department of Health and Human Services, the Centers for Medicare and Medicaid Services determined that Texas’s proposal to have Medicaid fund the state’s women’s health strategy is “likely to assist with promoting the objectives” of Medicaid “by providing access to high-quality family planning services that produce positive health outcomes for individuals.” It also notes that granting the waiver “will increase access to family planning services to avert unintended pregnancies.”

But in the same letter, CMS essentially acknowledges that Texas is not proposing any actual changes to the state-run program that saw access decline among the very population it was intended to help. The agency notes that it isn’t necessary for the state to “show in advance” that the waiver program “will in fact achieve particular outcomes,” and concludes that regardless of whether it succeeds, “the information it yields will provide policymakers real-world data on the efficacy of such policies. That in itself promotes the objectives of the Medicaid statute.”

“We know it’s a failed experiment,” says Pogue. “We’ve run it since 2011. We know how this experiment turns out.”

Asked about the disconnect between the stated objectives of Medicaid and granting the Texas waiver, a CMS spokesperson simply reiterated language contained in the agency’s approval letter, writing that “overall” the waiver program would provide uninsured women “access to family planning providers they would not otherwise have.” 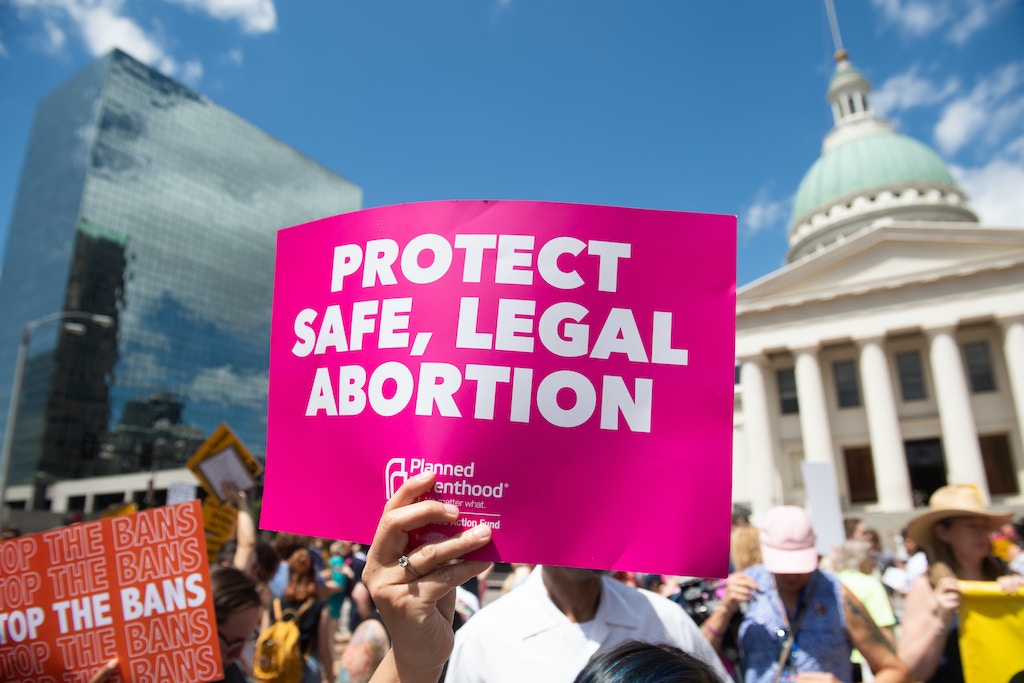 Protesters hold signs as they rally in support of Planned Parenthood near the Old Courthouse in St. Louis on May 30, 2019.

Because of the way the state has budgeted the Healthy Texas Women program, it will be dependent on the infusion of federal cash going forward, as opposed to using that money to augment a healthy state budget allocation. In other words, Pogue says, the state is simply decreasing its portion of the budget and swapping in the federal money. As such, there is even less reason to think that the program will actually be able to extend its reach beyond the clients it is already serving.

The schism between what the waiver program is designed to do and how it is being applied in Texas points to the fact that health care policy in the Trump administration is ideologically driven, says Summers.

“They have an agenda they have been executing for the last several years. This is one more step in that agenda,” Summers said. “It doesn’t seem to matter what the data show, that people are getting poor-quality care, that they’re lacking access to care. At the end of the day, it’s all serving an agenda that is harmful to patients.”

“This is setting up a road map for other states to follow to get federal funding but also to be able to block providers they don’t like.”

Indeed, in the waning days of the Obama administration, CMS issued a “clarifying” letter reminding states that they could not eliminate certain providers on ideological grounds. Shortly after Trump took office, Texas was reportedly “encouraged” to apply again to do just that.

On January 29, a group of 16 health care, legal, and religious organizations, including the National Family Planning and Reproductive Health Association, penned a letter to CMS urging it to rescind the decision to waive the provider-of-choice provision. “This approval will do nothing to expand access to family planning care and will only grant federal dollars and imprimatur to a discriminatory and failed Texas program,” the organizations wrote.

There are at least two additional waiver requests currently pending before the agency, from South Carolina and Tennessee. And in recent years, two other states, Iowa and Missouri, followed Texas’s lead in dropping their federal waiver programs for family planning in favor of dumping providers like Planned Parenthood. Texas’s success in regaining access to funds could set these states up for similar success. “This is setting up a road map for other states to follow to get federal funding but also to be able to block providers they don’t like,” said Summers.

The reshaping of federal health care strategy is proceeding on multiple fronts. The Trump administration has told California that it will withhold federal funds unless the state repeals a law requiring private insurers to cover abortion. And on January 30, the administration announced a plan to refashion Medicaid altogether, into a block grant program, which critics say could cause major damage across the system. Medicaid is the nation’s single largest health insurance program, covering roughly 65 million people in any given month. It is also critical to ensuring that low-income individuals can access family planning and reproductive care, reports the Guttmacher Institute. In 2017, Medicaid covered 21 percent of all women of child-bearing age, including 50 percent of those below the federal poverty line.

“All of these moves by the federal government, quite honestly, have been decreasing access to high-quality care,” Summers said. “That’s the common thread that they all have.”