Young People Have Been Eyeing the New Hampshire Primary Since 2017. They Could Make the Difference.

New Hampshire Youth Movement, which has endorsed Bernie Sanders, has identified and registered 12,000 students who didn’t vote in 2016. 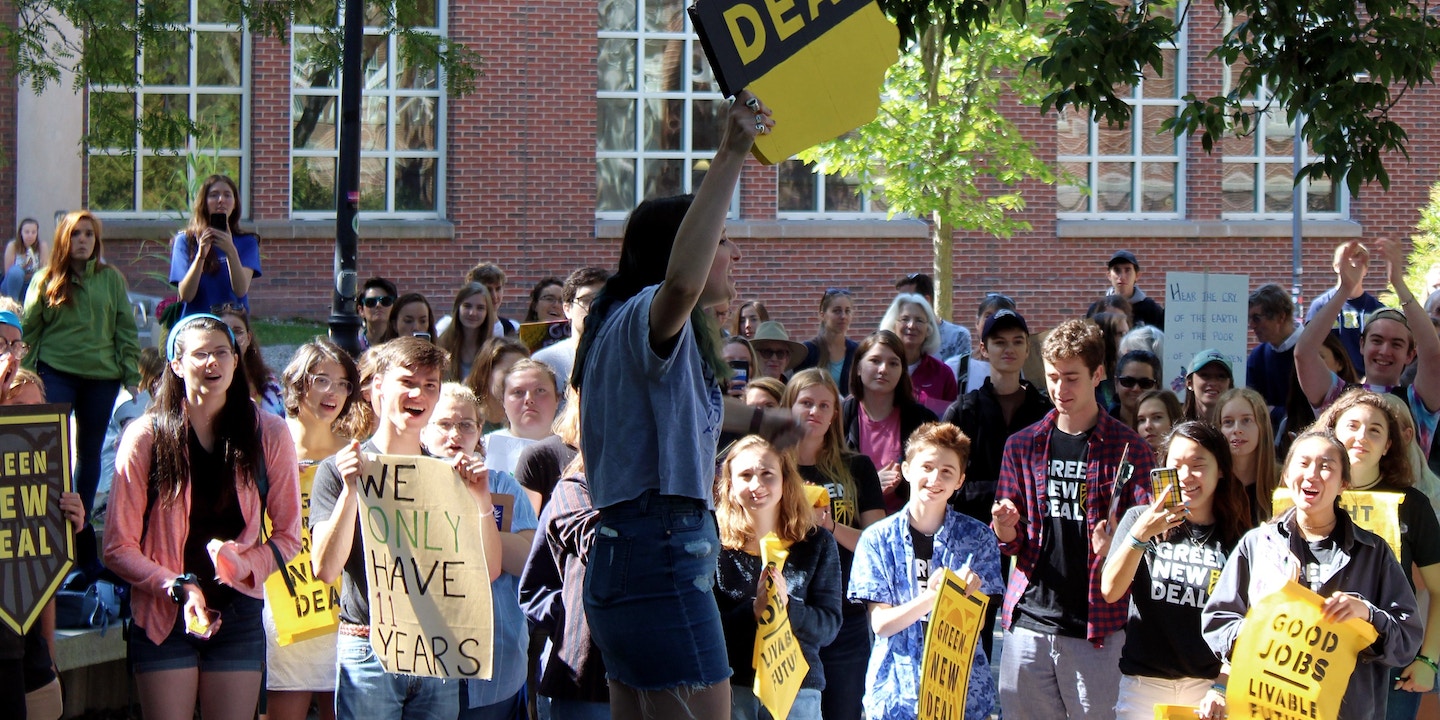 Throughout the 2016 election, youth organizers prowled the state of New Hampshire, registering college students and bird-dogging presidential candidates in the nation’s first primary state. They continued working to turn out young people through the general election, powering Democratic Senate candidate Maggie Hasan over the GOP incumbent, Kelly Ayotte, by just 1,016 votes, and Hillary Clinton over Donald Trump by a margin of 2,736. College students were so closely associated with the wins that the Republican legislature has since moved to curb their ability to vote in the state.

The core organizers came primarily from the campus fossil fuel divestment movement, which had been funded by the climate group 350.org and tried to pressure institutions to sell off their oil and gas investments. Heading into the 2016 primary, Yong Jung Cho, a 350 organizer, persuaded many of those divestment activists to focus on electoral politics, arguing that bigger gains could be made in the political arena.

But much of that organizing structure that powered 2016 turnout was left behind after the election. Tom Steyer’s NextGen America, which also provided significant funding for the organizing, largely decamped. “NextGen picked up their bags and left town,” said one young University of New Hampshire organizer, Dylan Carney. That left young people trained as activists with no home — but with Trump headed for the White House and a climate emergency barreling down.

In July 2017, divestment organizers from around the country met in Philadelphia to plot a new strategy, and some from New Hampshire, including Carney, joined. It was the critical gathering for a group that would eventually become Sunrise Movement. “We were like, this is exactly what we did for the last 12 months,” Carney said, referring to the organizing strategy being kicked around by the would-be Sunrise founders.

But, he said, given their connection to New Hampshire — a state that is at once small enough to organize yet positioned to influence the direction of national politics — they decided not to join Sunrise, but to go off on their own locally. “We knew our role in this world was to help polarize American youth around issues they care about, like a Green New Deal, free college, and Medicare for All.” Carney and a handful of his colleagues dropped out of school and committed to organizing full time. “Instead of Sunrise, we did New Hampshire Youth Movement.”

They had a simple goal: spend the next three years organizing in order to boost youth turnout in the New Hampshire presidential primary by 6 percent, and do the same in the general election. That would be enough, they figured, to nominate and elected a progressive as president in 2020.

So far, they’ve identified and registered 12,000 students who didn’t vote in 2016. The primary could be won with just 60,000 or so votes, given the crowded field, meaning that the youth intervention could prove decisive. On Tuesday, they’ll drive voters at multiple colleges in the state to the polls. In Iowa, youth turnout made all the difference. It jumped by something like a third over 2016 levels, providing Sanders the decisive margin he needed to win the popular vote in the state.

The new organization spent 2017 engaged in local legislative activity and turned to elections in 2018, trying to press Democratic candidates for an open New Hampshire congressional seat to back their issues: free college, a Green New Deal, Medicare for All. The group, under-resourced and inexperienced, with one full-time employee — Dylan Carney, who is now field director — and two part-timers, had little effect on Chris Pappas, who the party machine elbowed to the nomination. They backed him in the general and he won the seat in the fall.

Former South Bend Mayor Pete Buttigieg — who has the backing of a Super PAC called VoteVets that has spent millions on television ads in New Hampshire alone — has recently been complaining that Sanders has help from outside groups, by which he means National Nurses United, Sunrise, and Our Revolution. To that litany, he can add young people in New Hampshire: In 2019, NHYM was able to raise some half a million dollars and began hiring a dozen field organizers to fan out across college campuses, with the goal of registering and organizing enough young people to lift a progressive through the New Hampshire primary and the general election. The money, Carney said, came from Sunrise, Student Power Network, Alliance for Youth Action, and other sources. Sunrise endorsed Sanders in early January, followed by NHYM later that month.

Many of the NHYM organizers have put school on hold. Jackson Brennan, now organizing at University of New Hampshire, said he decided to devote himself to organizing in 2018. “I was struggling pretty hard in school, racking up debt, and I basically decided the world’s on fire, I’m drowning in student debt, I’m miserable, I might as well start doing this full time,” he said.

He said that NHYM has been encouraging students to engage in what’s known as relational organizing, a tactic also embraced by the Sanders campaign, which simply means urging your friends, roommates, and classmates to vote. Using an app called Empower, dorm captains are able to identify Sanders supporters they live with, who will then be called and texted by NHYM.

Quincy Abramson, 23, graduated from UNH this May and is the statewide field director for NHYM. She said that of the roughly 12,000 students the group has obtained pledge cards from, she expects most will turn out to vote, and many will bring roommates and friends.

Though NHYM has organized at every college in the state, she said it will have people on the ground on primary day at New England College, Keane State University, Plymouth State University, the University of New Hampshire, and Dartmouth, and will drive students to the polls at every campus where the administration doesn’t block them from doing so. Over the past few days, the organizers have made some 28,000 calls to potential student supporters, will likely pass 35,000 by Monday night, and are hitting thousands of dorm room doors. Over the weekend, they set a goal of knocking 8,000 doors, Carney said, and managed to hit more than 6,000 “I think we’ll see record-high turnout in every town where there is a school we’re at,” Abramson said.

The most competitive rival candidate in the field, when it comes to youth support, said multiple NHYM organizers, is Elizabeth Warren, while Andrew Yang has something of a following as well. One of the most respected youth organizers in the state, Hannah Bristol, a veteran of NextGen, has spent months organizing for Warren on New Hampshire campuses. Indeed, the Warren organized presence on college campuses, Carney said, far surpasses that of the Sanders campaign. (As Sanders has climbed in the polls over the past few months and Warren slumped, however, it may turn out that Warren organizers ended up registering students who ultimately turn out for Sanders, a victory for the progressive wing of the party, if not Warren herself.)

Witnessing the uptick in voting among young people in 2016, Republicans in the state legislature moved quickly to squash it, passing HB 1264 into law, which requires registered voters also to register their vehicles in the state and obtain a New Hampshire drivers license within 60 days of registering. The law is being challenged by the American Civil Liberties Union as plainly unconstitutional but, more importantly, it is effectively unenforceable, as police officers do not cross-reference drivers for their voter registration status. Instead, the law may be acting as a deterrent to possible voters.

Carney said the issue has come up in conversations with 10 to 20 percent of students, and organizers emphasize that it is a clear signal of just how important their vote is — so important that Republicans are doing whatever they can to stop them. New Hampshire has same-day voter registration, meaning that anyone who lives in the state can register and vote on the day of the primary, and those votes can’t be uncounted, whether the student goes on to register their vehicle in the state or not.

Correction: February 10, 2020, 5:00 p.m.
A previous version of this story included the incorrect caption for the feature image. The story has been updated with the correct caption.