Warren’s historic debate performance left Bloomberg in a politically bloodied mess — but it might already be too late for her to recover in the race. 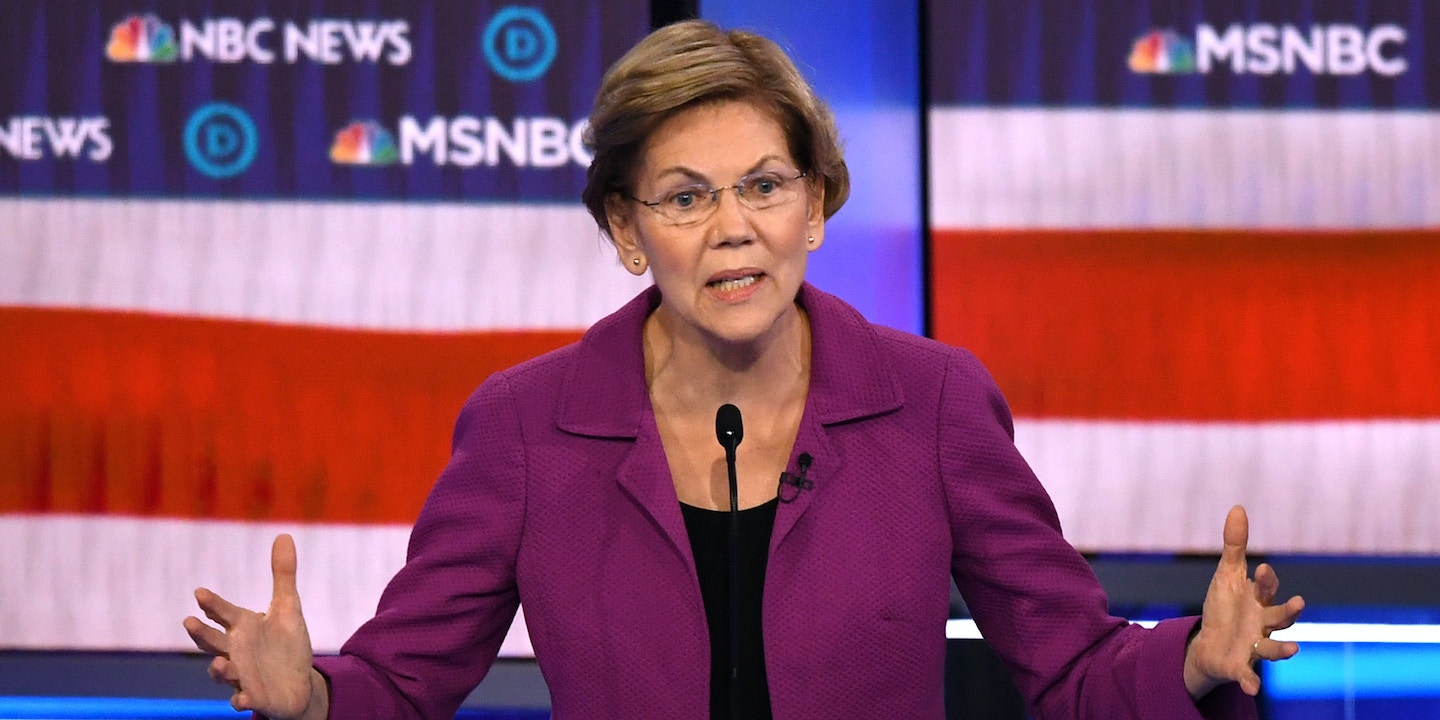 Elizabeth Warren rose to stardom slaying villains. The first time she was widely noticed on the national stage came with a gavel in her hand, as she pounded then-Treasury Secretary Tim Geithner for his mishandling of the Wall Street bailout. Elected to the Senate in 2012, she quickly transformed her perch on the sleepy Banking Committee into a public studio that regularly produced viral videos of her slicing hapless banking regulators and Wall Street executives to pieces. And her damning interrogation of Wells Fargo CEO Timothy Sloan was widely credited as leading to his “resignation.”

That combative spirit fueled a draft-Warren campaign for president, which she resisted in 2016. But in the 2020 cycle, she largely sheathed her knife until Wednesday, foiled by the muddled intra-party politics of a Democratic primary in which there was no obvious villain who could match a Geithner or Sloan. Even though she had spent a decade as a law professor tangling with Sen. Joe Biden over bankruptcy reform, she largely left him alone. Despite having been a leader in the Senate of the push to expand rather than cut Social Security, she allowed Sen. Bernie Sanders and his campaign team to fight it out with Biden over the program.

When Mike Bloomberg sauntered onto the debate stage, the old Elizabeth Warren reemerged, turning in a historic debate performance that left the former New York City mayor in a politically bloodied mess. Bloomberg, it turned out, was the foil Warren needed.

Warren opened with a heavy hit against Bloomberg, listing his similarities to President Donald Trump. “I’d like to talk about who we’re running against, a billionaire who calls women ‘fat broads’ and ‘horse-faced lesbians.’ I’m not talking about Donald Trump. I’m talking about Mayor Bloomberg,” she said, to roaring applause. “Democrats are not going to win if we have a nominee who has a history of hiding his tax returns, of supporting racist polls like redlining and stop-and-frisk. I’ll support whoever the Democratic nominee is, but understand this: Democrats take a huge risk if we just substitute one arrogant billionaire for another.” She went on to attack Bloomberg in waves throughout the debate.

Warren’s strong performance may turn out to be a murder-suicide: It might already be too late for Warren herself to recover in the race. In Nevada, where the debate was held, 70,000 early votes have already been cast, compared to 86,000 total in 2016. She’s polling in the single digits here, in South Carolina, and in many Super Tuesday states. And hundreds of thousands of people have already seen Bloomberg’s ads, thanks to the $233 million he’s spent so far on digital and TV, many of which could give the impression that he’s been endorsed by former President Barack Obama. And he racked up a number of endorsements from black congressional leaders and majors in the days leading up to the debate.

Sanders, the favorite in Nevada, stood to be a major beneficiary of Warren’s assault on Bloomberg. The Vermont senator is threatening an upset of Biden in South Carolina and has the potential to pick up roughly half of the delegates on Super Tuesday, building what could become an insurmountable delegate lead.

Earlier Wednesday, Bloomberg’s campaign warned of just that possibility, suggesting that to avert it, Biden, Warren, Amy Klobuchar, and Pete Buttigieg ought to drop out of the race and let Bloomberg focus on Sanders one-on-one.

Klobuchar took immediate offense to Bloomberg’s suggestion, and it quickly became clear that nobody on the stage planned to take his advice. Asked at the end of the debate whether the candidate with the most delegates, even if short of a majority, should be the nominee going into the convention, all but Sanders demurred, seeing their path to the nomination in a contested convention.

Bloomberg made it to the debate stage for the first time after the Democratic National Committee changed its qualification threshold in January, allowing him to qualify by funding his own campaign.

Buttigieg, too, was hit hard by Warren, who said he “makes it unclear what he stands for other than his own advancement.” Klobuchar later seconded her, telling him, “You have memorized a bunch of talking points and a bunch of things.”

Warren took on the role of fact-checker on Bloomberg’s attempts to bat away criticisms of his stop-and-frisk policy and numerous allegations of sexual harassment.

On stop-and-frisk, Bloomberg noted his apologies, and said he was worried and embarrassed about the impact the policy had on black and brown New York City residents. “There is no great answer to a lot of these problems. And if we took off everybody that was wrong off this panel, everybody that was wrong on criminal justice at some time in their careers, there’d be nobody else up here,” Bloomberg said.

“Listen very closely to the apology,” Warren said. “This isn’t about how it turned out. This is about what it was designed to do to begin with. It targeted communities of color. It targeted black and brown men from the beginning.”

Warren wasn’t the only one who got in shots on Bloomberg. NBC’s Hallie Jackson asked Bloomberg about repeat allegations that he oversaw a hostile work environment for women and that he had admitted to making sexually suggestive remarks. The former mayor responded feebly by touting the percentages of women who work at Bloomberg Foundation and in his mayoral office. “None of them accuse me of doing anything, other than maybe they didn’t like a joke I told,” he said.

The exchange gave Warren another opportunity to go after Bloomberg. “We are not going to beat Donald Trump with a man who has who knows how many nondisclosure agreements,” she said, referring to the unknown number of women who worked for Bloomberg who have agreed not to speak publicly about their claims of gender discrimination or sexual harassment.

The end of Michael Bloomberg in 2:19.pic.twitter.com/nN0pGwhkBu

Bloomberg said that there are “very few nondisclosure agreements,” describing them as “agreements between two parties that wanted to keep it quiet and that’s up to them.” Warren then shifted the conversation to Bloomberg’s electability, warning against “the drip, drip, drip of stories of women saying they have been harassed and discriminated against.”

When moderators pressed Klobuchar about not knowing who the Mexican president is, Warren came to her defense, saying it was just a moment of forgetfulness. “Let’s be clear, missing a name all by itself does not indicate that you do not understand what’s going on, and I just think that’s a mistake,” she said.