Attorney General Barr has been criticized for intervening in cases involving Trump associates. Prince’s may be the most politically sensitive of all. Last May, shortly after Congress accused Erik Prince of lying under oath and referred criminal charges to the Justice Department, an associate approached the Blackwater founder to offer help and commiserate about Prince’s potential legal jeopardy.

Prince, who once moved to the United Arab Emirates to avoid being caught up in a federal prosecution, immediately dismissed the associate’s concerns. He was untouchable, he bragged, and would face no legal troubles.

“Not under this guy,” Prince said referring to President Donald Trump, according to a person with direct knowledge of the exchange.

That assumption is about to be tested.

Prince, an heir to a billion-dollar fortune who is widely viewed as a shadow adviser to the president, is under federal investigation for his 2015 attempt to modify two American-made crop-dusting planes into attack aircraft — a violation of arms trafficking regulations — two people familiar with the investigation told The Intercept. The planes became part of private military services Prince proposed to sell or use in mercenary operations in Africa and Azerbaijan, as The Intercept has previously reported.

The investigation into the modified crop dusters is one of several ongoing probes targeting Prince. Another focuses on the allegations that he lied to Congress during the House Intelligence Committee’s investigation into Russia’s 2016 presidential election interference; a third concerns a 2017 armed aviation proposal to the UAE, according to the Wall Street Journal.

The investigation of Prince coincides with heightened scrutiny of Attorney General William Barr, who has been heavily criticized for intervening in two other prominent criminal cases involving friends and associates of Trump. The Prince investigations, and decisions about whether or not to charge him, are perhaps the most politically charged of all.

That Prince’s efforts to arm and sell the two American-made crop dusters are part of the FBI’s investigation into his activities has not been previously reported. 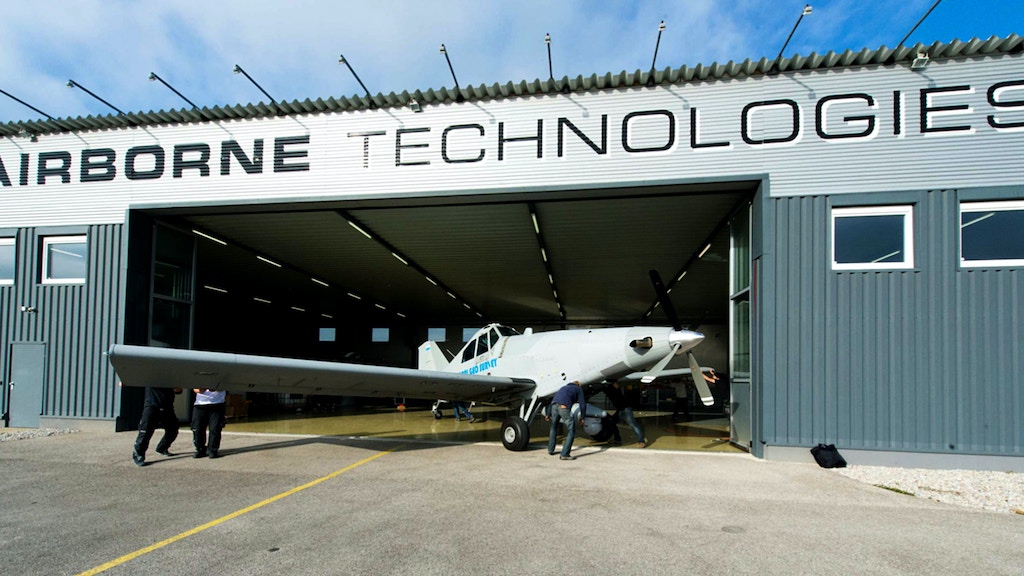 One of the Thrush 510G aircraft being modified at Airborne Technologies’ hangar in Wiener Neustadt, Austria. Prince owns at least 25 percent of the company.

Prince’s connections to Trump reflect the netherworld of deniability in which he operates: He has no official role with the White House or Trump campaign, but appears to benefit from the association. Prince donated $250,000 to help elect the president and worked to help his campaign dig up dirt on Hillary Clinton, according to the Mueller report. Prince also worked closely with Steve Bannon, then Trump’s campaign manager, trying to shape Trump’s foreign policy and national security positions throughout the campaign.

After the election, Trump appointed Betsy DeVos, Prince’s sister, as his secretary of education. Prince then met with a Russian banker in the Seychelles in an apparent effort to establish a backchannel between the incoming Trump administration and the Russian government, according to the Mueller report. That meeting later became the focus of Prince’s testimony before the House Intelligence Committee. The Mueller report described details of the meeting that appeared to contradict Prince’s sworn testimony and triggered the committee’s criminal referral to the Justice Department.

Prince has also visited the White House several times to pitch privatizing wars in Afghanistan and the Middle East, as well as how to confront Iran, according to two people familiar with Prince’s efforts.

Barr, the nation’s top law enforcement official, has faced extensive criticism for his efforts to oversee cases involving Trump’s advisers and associates. Last week, after career prosecutors requested seven to nine years in prison for Roger Stone, a longtime Trump associate, Trump tweeted his disgust, calling the sentence “a miscarriage of justice.” Stone was convicted of seven felony counts of lying, obstruction of justice, and witness tampering related to a congressional investigation into Russian interference in the 2016 presidential election; the sentence prosecutors had requested was in line with federal guidelines.

A few hours later, Barr overruled his line prosecutors, seeking a lesser prison sentence for Stone. The move led the four career federal lawyers handling the Stone case to quit the prosecution, and one of them resigned from the Justice Department altogether. More than 2,400 former Justice Department employees have since called for Barr’s resignation. On Thursday, a federal judge sentenced Stone to three years and four months in prison.

Barr also appointed a close colleague as U.S. attorney in Washington, D.C., and recently brought in outside federal prosecutors to supervise the work of career government attorneys in several high-profile cases overseen by that office, according to the Washington Post. Among the cases being reviewed are those involving former Trump national security adviser Michael Flynn and Prince.

Mary McCord, a former senior Justice Department official during the Obama and Trump administrations who now teaches at Georgetown Law School, told The Intercept that Barr had already damaged the department’s ability to investigate politically sensitive criminal cases when he mischaracterized the Mueller Report before it was released publicly. With Barr stepping into the Stone and Flynn cases, whatever outcome the Justice Department announces in the Prince investigations will be subject to criticism about political interference.

“It’s really troublesome, McCord said. “The approach to any case connected to Trump is now fraught given the appearance that the department is a tool for the president to wield in favor of his friends and against his detractors.”

In 2015, Frontier Services Group, a Hong Kong-based logistics company founded by Prince, hired a U.S. law firm to review the company’s legal exposure to violations of U.S. law on weapons sales and the export of defense services to foreign governments and militaries. The attorneys concluded that Prince had likely violated the International Traffic in Arms Regulations, known as ITAR. The legal assessment, which was conducted by King & Spalding, also recommended that the American personnel at FSG report the violations to the Justice Department, which happened a few month later in 2016.

“The potential violations stem principally from conduct of Mr. Prince, a U.S. person,” Frontier Services Group CEO Gregg Smith wrote to the director of the State Department’s Directorate of Defense Trade Controls, which regulates the export of defense articles and services, in a letter obtained by The Intercept.

In 2018, an FSG spokesperson, responding on behalf of the company and Prince, told The Intercept: “Any assertion that FSG or Mr. Prince violated any laws in this matter is categorically false.”

It is unclear why the FBI took more than three years to investigate Prince for the modification of two crop dusters. Prince has long sought to convert the single-engine agricultural aircraft into light attack planes, which he believes can revolutionize how small wars are fought. The two planes, manufactured by Thrush Aircraft in Albany, Georgia, were the first prototypes Prince built in an effort to create a low-cost air force for his vision of privatized warfare. Inside a hangar in Austria, where the Thrush were stripped down and rebuilt as paramilitary aircraft.

Prince has never been charged with a crime in the United States. But his career as a private security entrepreneur has been marked by atrocities like the murder of four Blackwater personnel in Fallujah in April 2004 and the Nisour Square massacre of 2007, both of which gave rise to federal proceedings. A civil lawsuit brought by the families of the American contractors killed in 2004 resulted in a confidential settlement; a federal criminal trial against four Blackwater personnel for murder and manslaughter yielded convictions. In each case, Prince escaped personal liability.

In 2012 Blackwater, under a new corporate name, ownership, and management, entered into a deferred prosecution agreement with federal prosecutors and paid a $42 million fine for a series of weapons trafficking and ITAR-related offenses. Prince admitted no wrongdoing and walked away from U.S. government contracts but eventually lost his ITAR license. Despite that, he has since gone on to provide or offer defense services in at least 10 countries, mostly in Africa and the Middle East, according to documents and people with knowledge of the various plans.