Mike Bloomberg went out of his way to rehabilitate his money manager Steven Rattner after he settled corruption charges with the SEC and New York state. 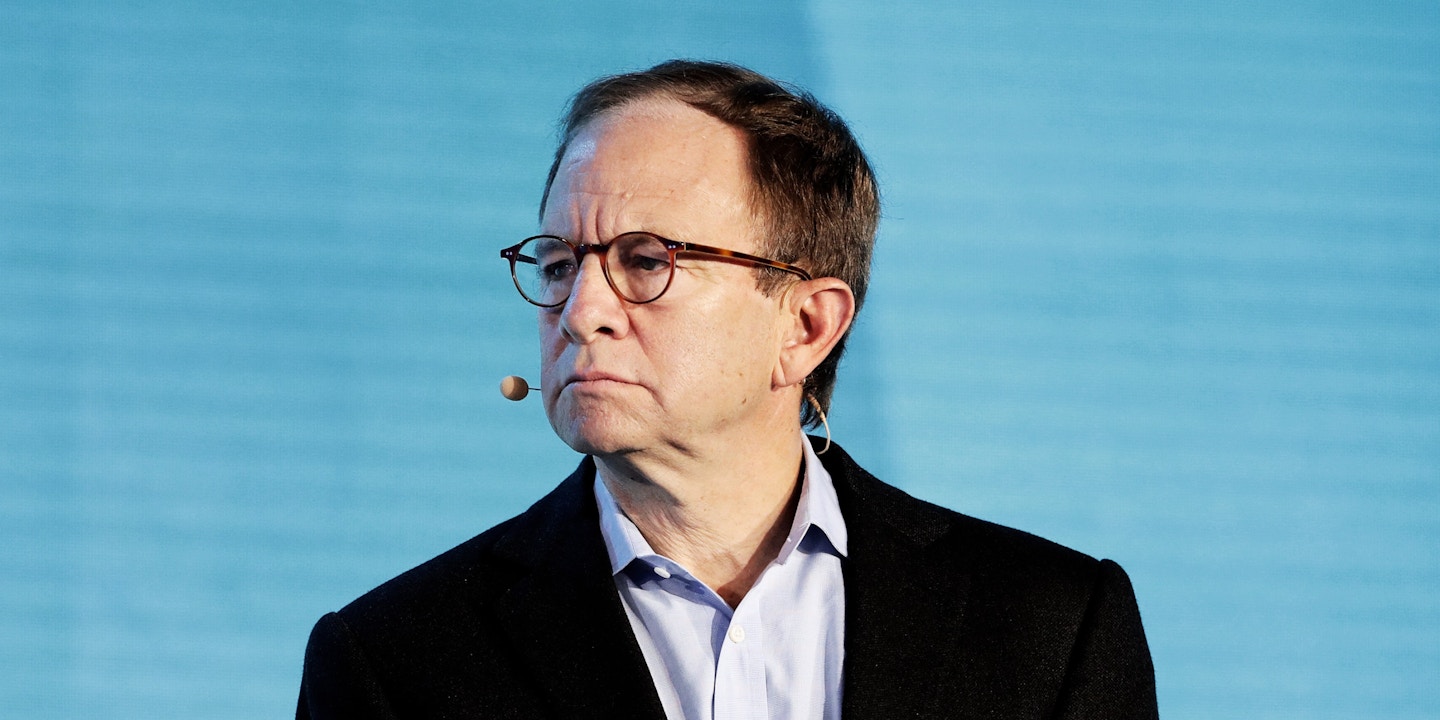 On November 4, financier Steven Rattner published an op-ed in the New York Times headlined “The Warren Way Is the Wrong Way.” An Elizabeth Warren presidency is “a terrifying prospect,” Rattner wrote, for “she would extend the reach and weight of the federal government far further into the economy than anything even President Franklin Roosevelt imagined.” Warren might call herself a capitalist, but her “panoply of minutely detailed plans” shows that she would “turn America’s uniquely successful public-private relationship into a dirigiste, European-style system. If you want to live in France (economically), Elizabeth Warren should be your candidate.”

The Times identified Rattner thus: “Steven Rattner, a counselor to the Treasury secretary in the Obama administration, is a Wall Street executive and a contributing writer.” It did not mention Rattner’s current position: chair and CEO of Willett Advisors, which manages the personal and philanthropic assets of Michael Bloomberg. At the time, Bloomberg was very publicly considering a run for president. With Rattner attacking one of Bloomberg’s rivals, readers deserved to know of his financial relationship to him. (Since November 24, when Bloomberg entered the race, two columns by Rattner have mentioned the Willett connection.)

Rattner also appears regularly on MSNBC’s “Morning Joe” (and, from time to time, on “Hardball With Chris Matthews,” “All In With Chris Hayes,” and “The Last Word with Lawrence O’Donnell”). Only recently has Morning Joe begun to mention Rattner’s Bloomberg connections, and then but briefly. On January 28, Rattner went after Bernie Sanders on “Morning Joe.” While Elizabeth Warren’s Medicare for All plan had been closely scrutinized, Rattner said, Sanders’s version — though even more expensive — had not. He displayed a chart showing how much federal spending would (by his estimate) increase under each candidate over 10 years: 1.5 percent for Joe Biden, 2 percent for Pete Buttigieg, 12 percent for Warren, and 20 percent for Sanders. No one was discussing this, Rattner complained. The main reason, he ventured, is that Sanders is “like everybody’s eccentric uncle. We all have an eccentric uncle. Not a lot of people thought he was a serious contender for the nomination and so he has not been subjected, I don’t believe, to the same dissection of his plans and policies.” Rattner’s role as Bloomberg’s money manager was fleetingly noted.

Yet that description does not begin to capture the depth of the ties between the two men. Bloomberg, in fact, helped rescue Rattner’s career when it was on the verge of collapsing. The two men move in the same ostentatiously wealthy, socially entitled, politically connected circles in New York. While Bloomberg is an overlord in that world, Rattner is a courtier, cultivating rich and powerful people who can help enlarge his own income and influence. He exemplifies the Democratic Party’s capture by a privileged caste divorced from ordinary working people. Raised on Long Island, the son of a paint manufacturer, Rattner attended Brown. After graduating, in 1974, he joined the New York Times. After a stint as a general assignment reporter in New York, he was assigned to the Washington bureau. Focusing on energy and the economy, he got to know some senior Wall Street figures working in the Carter administration. Also in the bureau was Arthur Sulzberger Jr., who was learning the reporting ropes in anticipation of succeeding his father as publisher of the paper; he and Rattner became close. In 1981, Rattner was assigned to the paper’s London bureau. But as his future wife Maureen White later told the Washington Monthly, Rattner was growing tired of writing about people who had more money and power than him but were no smarter or more capable.

And so in 1982, Rattner left journalism to work in investment banking: first for Lehman Brothers, then for Morgan Stanley, then for Lazard Frères. At Lazard, he specialized in media mergers and acquisitions, helping to broker some of the largest deals in the industry and earning staggering fees in the process. “The premier investment banker of his generation,” Vanity Fair called him in a 1994 profile that gushed about his polish, focus, judgment, and “gift of expression” — and which caused much envy on Wall Street.

Rattner rose to No. 2 at Lazard, but his way to the top was blocked, so in 2000 he and three other Lazard partners left to form Quadrangle, a private equity firm. He convinced friends like Mortimer Zuckerman, Barry Diller, Henry Kravis, and telecom mogul Craig McCaw to invest in the company, and with their money he arranged leveraged buyouts of media companies (another way of saying that he helped promote media concentration). The Grill Room of the Four Seasons, located in the same building as Quadrangle’s office, became Rattner’s cafeteria. In 2008, Michael Bloomberg chose Quadrangle to manage the investments of his fortune.

Rattner and his wife magnified their social and political influence by throwing dinner parties in their palatial apartment on Fifth Avenue overlooking the Metropolitan Museum of Art. When needing fresh air, they could visit either their horse farm in bucolic North Salem in northern Westchester County, where Bloomberg was a neighbor, or their 15,000-square-foot home in Martha’s Vineyard, where Brian Roberts, the CEO of Comcast (which owns NBC), lived nearby. They flew to the island in their private jet. Rattner served as the chair of the Educational Broadcasting Corporation, the parent of Channel Thirteen, and on the board of the Brookings Institution. Maureen White served as the national finance chair of the Democratic National Committee and was so successful at it that New York magazine called her the “DNC’s ATM.” The couple was close to Chuck Schumer and the Clintons and raised money for Hillary when she ran in 2008, but they moved seamlessly to support Obama when he won the nomination.

After Obama’s election, Tim Geithner, his Treasury secretary, recruited Rattner to head the presidential task force on restructuring the auto industry, and in February 2009, he moved to Washington. His efforts to resuscitate GM and Chrysler were controversial; the companies themselves praised his work, but hundreds of car dealerships were eliminated, and thousands of jobs went with them. Nonetheless, there was talk of Rattner getting a more senior post.

That spring, however, his name surfaced in connection with investigations undertaken by both the SEC and New York Attorney General Andrew Cuomo into a “pay to play” scheme in which private equity firms (including Quadrangle) offered kickbacks to middlemen to secure investments from New York state’s $130-billion retirement fund. Cuomo had initially offered Rattner immunity because the emails he turned over indicated that he had not played a personal part in the matter. After Rattner left Quadrangle, however, the firm found emails Rattner had not submitted and sent them to Cuomo’s office. When he saw them, Cuomo exploded, since they suggested far greater involvement on Rattner’s part than he had acknowledged. Obama officials quietly distanced themselves from him, and in July he left the administration to write a book about his experiences as car czar.

Over the next year, Cuomo and Rattner engaged in a vitriolic feud, with Cuomo accusing Rattner of lying to him and Rattner charging Cuomo of using tactics close to extortion. A settlement was finally reached in December 2010, with Rattner agreeing to a payment of $10 million and a five-year ban on appearing before state pension boards. Rattner, said Cuomo, “was willing to do whatever it took to get his hands on pension fund money, including paying kickbacks, orchestrating a movie deal, and funneling campaign contributions.” Rattner  settled separately with the SEC, agreeing to pay $6.2 million and consenting to a ban on “associating with any investment adviser or broker-dealer” for at least two years. Rattner, said the SEC, “delivered special favors and conducted sham transactions that corrupted the Retirement Fund’s investment process.” Quadrangle, which itself had to pay $12 million to settle charges against it, was no less scathing: “We wholly disavow the conduct engaged in by Steve Rattner. That conduct was inappropriate, wrong, and unethical. Mr. Rattner is no longer with the firm and is not part of today’s settlement.” (Rattner did not admit wrongdoing in either the New York or the SEC case.)

Such an abrupt fall from grace would have crushed most mortals, but Rattner was already engineering his comeback. He kept up a busy schedule of charity benefits and social events. According to a column in Reuters, he and his wife held a dinner party whose guests included Charlie Rose, Financial Times editor Gillian Tett, TV executive Mark Whitaker, literary agent Amanda Urban, and Bloomberg. In September 2010, Rattner’s book “Overhaul” came out, and to celebrate it, Bloomberg and Sulzberger co-hosted a party in the Grill Room of the Four Seasons; in attendance were such luminaries as Jamie Dimon, Lloyd Blankfein, Henry Kravis, and Robert Rubin. In July 2011, Rattner began contributing regularly to the Times, and he soon began appearing on “Morning Joe.”

With Rattner no longer at Quadrangle and Wall Street mostly off-limits to him, Bloomberg moved his money out of the fund and set up Willett Advisors as a new entity to manage it, and he carved out a role for his friend. The move came at a time when Bloomberg was looking to expand his philanthropic giving and the influence it could bring; Rattner, with his connections, was clearly in a position to help.

Full absolution for Rattner (who did not respond to a request for comment) finally came in February 2013, in the form of a column by Times financial writer and editor Andrew Ross Sorkin. “A Reputation, Once Sullied, Acquires a New Shine,” ran the headline. According to Sorkin, Bloomberg was the one friend who stuck by Rattner throughout his ordeal. The column included this priceless quote from Bloomberg: “I never heard anyone say they wouldn’t invite Steven Rattner to a party because of what was happening.”

That comment nicely sums up the clubby, entitled universe these two men inhabit. It’s a world of sumptuous galas and power lunches, strategic philanthropy and prestigious boards, private planes and grand estates, insider deals and mutual favors. Among the favors Rattner is now providing Bloomberg is attacking his rivals in the presidential race. Their relationship embodies the rigged system that people like Sanders and Warren are fighting.