Trump and some pundits have flirted with border closures but health experts say the key is dealing with the coronavirus inside the country. 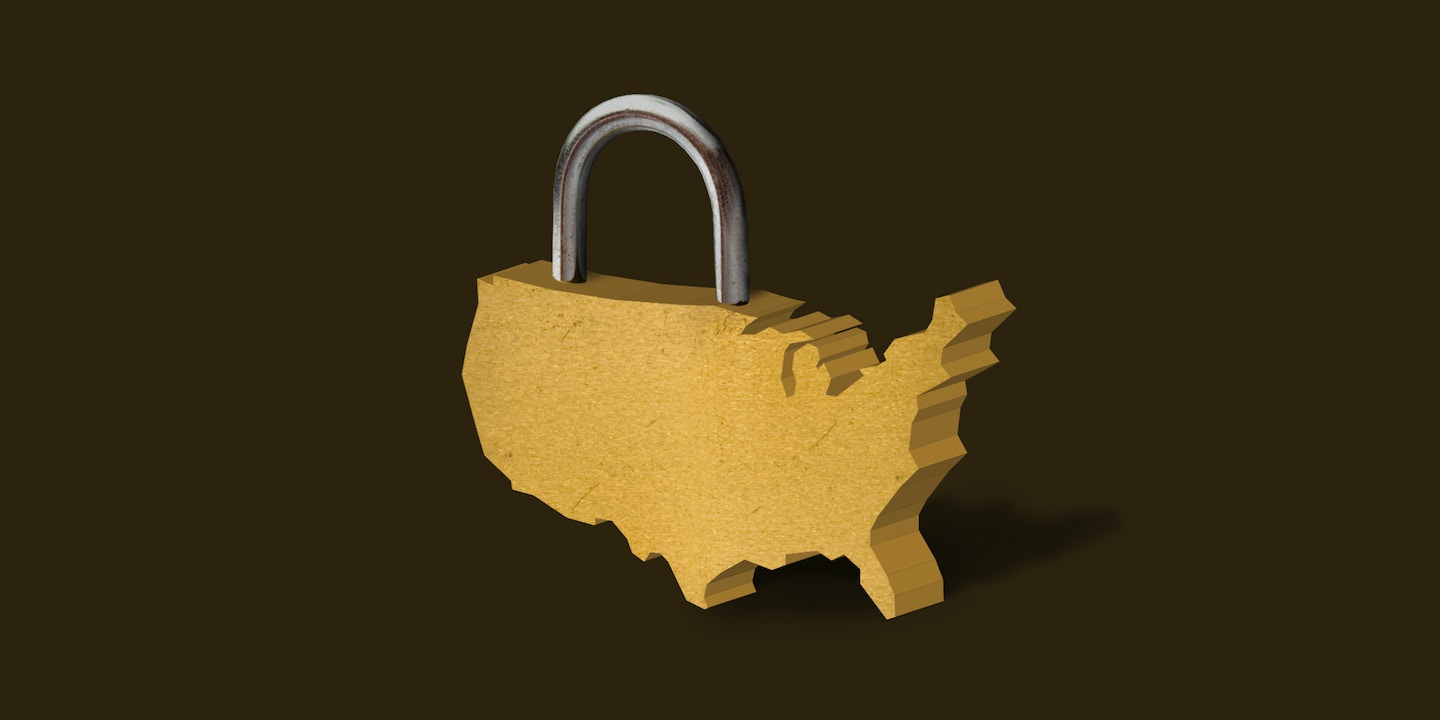 While he lacks expertise in any relevant field, President Donald Trump has never shied away from making pronouncements about fighting infectious diseases. “KEEP THEM OUT OF HERE!” Trump tweet-bellowed about American health care workers in West Africa who were infected with the Ebola virus in 2015, calling for harsh border controls to bar travelers from any “EBOLA infected countries.”

As the world grapples with the spread of a new coronavirus known as Covid-19, Trump still seems to hold similar beliefs on borders. He flirted in the past week with suggestions for border restrictions that would probably do more harm than good. But experts warn that some draconian public health interventions — such as completely closing borders — can quickly become counterproductive. Once a disease has taken hold inside a country, the best options are domestic interventions by state and local public health authorities with ample support from the federal level.

“I hope President Trump is not thinking about shutting down the borders completely, because then you really do have a situation in which we can’t help other nations and the disease will nonetheless be here,” said Amy Fairchild, an ethicist, public health historian, and dean of the Ohio State University College of Public Health. “We will only end up creating vulnerable, underserved populations in this country, and we’ll exacerbate the challenges of providing aid to African and Asian countries that have more fragile health care systems.”

Last Friday, Trump mentioned the possibility of closing the U.S. border with Mexico. “We are looking also at southern border,” he said. “We have received a lot of power on the southern border over the last couple of years from the courts. But we are looking at that very strongly.” This idea — which probably has more to do with furthering Trump’s anti-immigration agenda than fighting an infectious disease — has been echoed by conservative pundits who have the president’s ear.

“So, while we have closed and controlled the doorways at our ports of entry, we have got this wide-open doorway on our southern border, which leaves us exposed to pandemics like this,” said former Kansas Secretary of State Kris Kobach on “Fox & Friends Weekend.” “So, as someone who has been fighting for border control for a long time, I say: ‘Hey, don’t forget we still have that wide-open back door.’”

Even Fox News noted that there have been zero reported cases of Covid-19 in the Rio Grande Valley and northern Mexico to date. There have, however, been cases in U.S. states bordering Mexico, including California, Arizona, and Texas.

Once a disease has taken hold inside a country, the best options are domestic interventions by state and local public health authorities with ample support from the federal level.

Margaret Harris, a World Health Organization spokesperson and medical doctor currently involved in the Covid-19 response, echoed the concerns about the false comfort of closing borders.

“You divert a lot of resources when you are focused on closing borders, rather than focusing on protecting your health workers, preparing your health systems, and enhancing your disease surveillance,” she told The Intercept. “You mistakenly think, ‘Oh, we closed our borders. We’re fine.’ But giving people the sense that they are the enemy, that they are the problem, makes people hide because they become very frightened of the consequences. They’re not sure that identifying themselves with the authorities will be something that has good consequences for them as we saw with Ebola.”

So-called medieval methods of disease control — quarantines, closing borders, trapping people in outbreak areas — can work, at least for a time. Interventions like barring entry to non-Americans who were recently in China may have initially slowed the spread of Covid-19 in the United States. “We have, through some very good early decisions — decisions that were actually ridiculed at the beginning. We closed up our borders to flights coming in from certain areas, areas that were hit by the coronavirus and hit pretty hard,” Trump said last Thursday.  “A lot of people thought we shouldn’t have done it that early, and we did, and it turned out to be a very good thing.”

Right now, the United States is employing expanded screening methods for Covid-19, including temperature checks at airports. These same types of commonsense public health measures were in use when The Intercept investigated border crossings between the Democratic Republic of Congo and Rwanda during an Ebola outbreak last year. But screening efforts at major crossing points were being undermined by harsh restrictions imposed by the Rwandan military at neighborhood and informal foot crossings. Those harsh restrictions failed because they encouraged clandestine crossings where there were no screenings at all; Ebola had the opportunity to spread undetected. “People are always going to find a way to cross,” said Aurelien Pekezou Tchoffo, a WHO doctor specializing in emergency preparedness who strenuously discouraged closing the DRC-Rwanda border. “It will just make it more difficult to screen people.”

That’s why fighting the disease within the country, rather than just at its borders, is so important. “Right now, we don’t know if we’re going to have millions dead in six months to a year, or if we’re going to have thousands dead — if it’s going to be more like today’s flu or the 1918 flu,” said Fairchild, referring to the 1918 Spanish flu outbreak that killed between 50 million and 100 million people. “The one thing we don’t want to do is look back at this moment in time and say we had an opportunity to fund public health interventions that would help to make sure that this doesn’t happen again, and we didn’t take it.”

The Centers for Disease Control believes the spread of the disease is unavoidable. “It’s not so much a question of if this will happen anymore, but rather more a question of exactly when this will happen and how many people in this country will have severe illness,” said Nancy Messonnier, director of the CDC’s national center for immunization and respiratory diseases, last Wednesday. But asked about it a day later, Trump offered a completely contradictory judgment. “Well, I don’t think it’s inevitable,” he began before launching into a meandering response. Reality upended the president’s incoherent pronouncements as word soon emerged that Covid-19 has likely been spreading undetected for around six weeks in Washington state, where the first U.S. deaths from it were reported this past weekend. Trump does now admit that “additional cases in the U.S. are likely.”

Due to his vacillations, it’s difficult to discern what the president believes about closing borders in the face of disease. In an election year, with the stock market in free fall, and some conservative pundits calling for border closures, it’s possible that he will insist on draconian “KEEP THEM OUT OF HERE!” measures to fight a widening epidemic. And this would most likely be a distraction.

Asked what advice she would give Trump in the face of Covid-19, Fairchild was unambiguous. “Put a scientist in charge of the outbreak — someone like Anthony Fauci, and give him free rein. Also, try to contain the impulse to weigh in via Twitter.” Unfortunately, the president has put the vice president, Mike Pence, in charge of the response, and while Fauci, the head of the U.S. National Institute of Allergy and Infectious Diseases, is on Pence’s coronavirus task force, there are reports that he is being “muzzled” for contradicting the president. (The Intercept’s attempts to arrange an interview with Fauci were unsuccessful).

Fairchild’s advice is pointed. “Put the resources back into the epidemic monitoring systems that were created after the Ebola outbreaks that help to identify, test, and control the disease in the countries where outbreaks occur, rather than thinking that we can fortify at the border,” she said. “That’s now an archaic notion that we’re going to protect ourselves at the border.”

In the end, Fairchild said it’s going to come down to community efforts to combat the virus. “These things play out at the community level,” she said. “These communities need the resources. We’re talking about the state health departments and the local health departments.” Many local and state health departments and hospitals already suffering from recent budget cuts are not only low on funds and personnel, but also facing shortages of critical supplies, including specialized face masks, known as N95 respirators, and coronavirus diagnostic testing kits.

“We need to give resources to the states to ensure that there’s a supply of masks, of tests, of respirators, and that’s going to require investing in the public health infrastructure,” Fairchild noted. “This can’t be done in an episodic way. It’s going to require a sustained effort.”