A top aide to Brazil’s President Jair Bolsonaro traveled to Florida for meetings with Donald Trump and then tested positive for coronavirus. 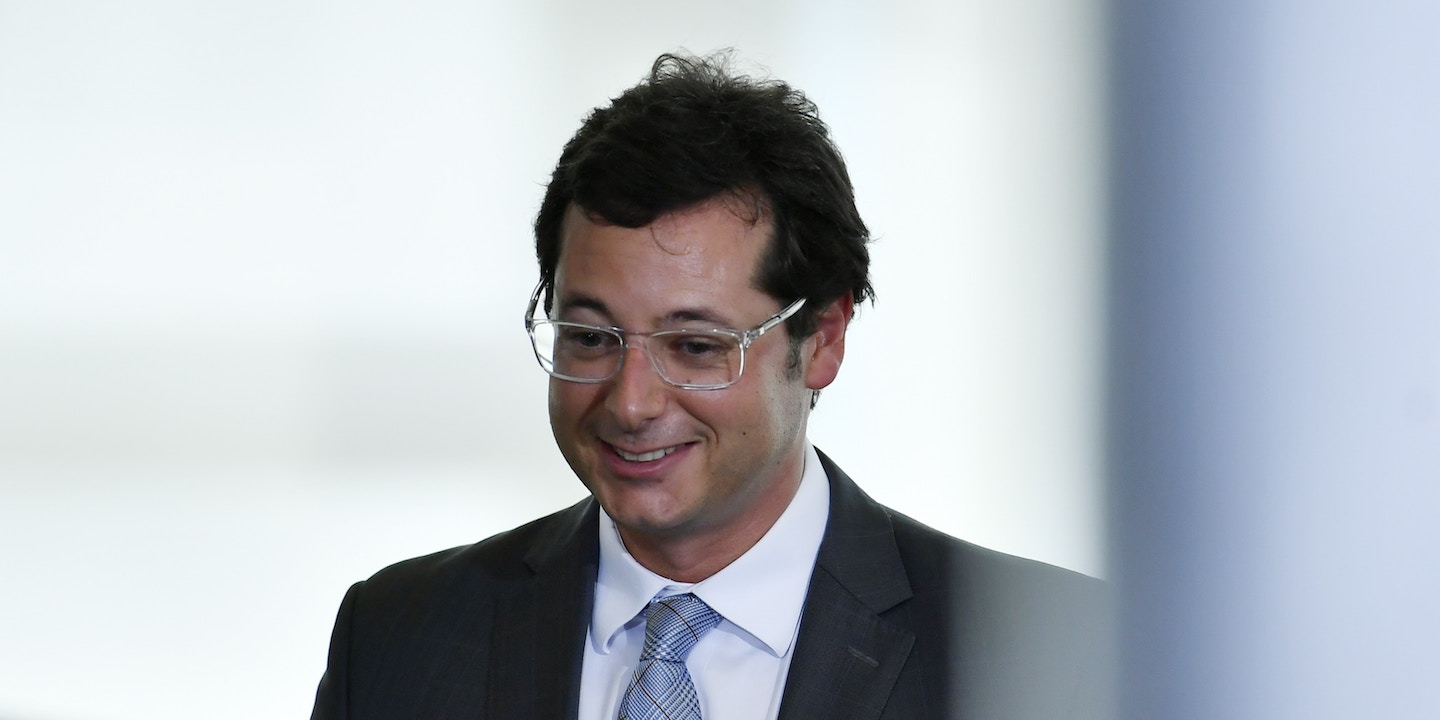 A Brazilian official who met with President Donald Trump at Mar-a-Lago on Saturday tested positive for Covid-19, the disease caused by the novel strain of coronavirus that has risen to pandemic levels. Fábio Wajngarten serves as Brazilian President Jair Bolsonaro’s communications secretary and traveled with his boss to Trump’s Florida resort for a meeting over the weekend, before testing positive upon his return to Brazil.

A source also confirmed to The Intercept that three other members of the delegation to Florida are showing flu-like symptoms, including fevers, though it is unclear what the results of coronavirus tests may be. The source, who has direct knowledge of the conditions of some members of the delegation that traveled with Bolsonaro to the U.S., asked for anonymity for fear of retaliation. A screenshot of an image posted on Instagram by Fabio Wajngarten shows him posing with President Donald Trump and Vice President Mike Pence at Mar-a-Lago last weekend.

The Saturday event at Mar-a-Lago was to celebrate the birthday of Trump fundraiser Kimberly Guilfoyle, who is also dating the president’s son Donald Trump Jr. Trump Jr. was also in attendance, as were Vice President Mike Pence, Ivanka Trump, Jared Kushner, Eric Trump, and Rudy Giuliani, many of whom are seen in close contact with the Brazilian delegation in video and photos of the event.

A source also confirmed to The Intercept that three other members of the delegation to Florida are showing flu-like symptoms, including fevers.

The four Brazilians who fell ill — one confirmed and three possible cases — did not take tests in Miami. Instead, some members of the delegation with symptoms chose to return to Brazil to take the test in São Paulo, a move that went against recommendations of the World Health Organization. Bolsonaro was tested for coronavirus this Thursday and results are expected on Friday.

Wajngarten’s wife, publicist Sophie Wajngarten, confirmed her husband’s infection on a WhatsApp group for parents of the school attended by the couple’s children. The Intercept obtained a copy of the conversation from a source who asked not to be identified.

Brazil’s Palácio do Planalto, the president’s official office, also confirmed Wajngarten’s positive test. “The medical service of the Presidency of the Republic has adopted and is adopting all the necessary preventive measures to preserve the health of the president and of the entire presidential delegation that accompanied him on a recent official trip to the United States,” the Palácio do Planalto said in a statement. The same day he returned to Brazil, Wanjgarten made a joke on Twitter about the possibility of contracting the illness in the U.S.

The president’s wife, Michelle Bolsonaro, and other government officials were also in the U.S., including, Minister of Foreign Affairs Ernesto Araújo; Minister of the Institutional Security Office former Gen. Augusto Heleno; Minister of Defense Fernando Azevedo e Silva; Minister of Mines and Energy Bento Albuquerque; Minister of Science, Technology and Communications Marcos Pontes; and Eduardo Bolsonaro, the president’s son who serves as a member of Congress. The entire group had contact with Wajngarten and, according to WHO recommendations, should be quarantined for 14 days to prevent the virus from spreading.

Wajngarten is at the center of one of the Bolsonaro government’s scandals, as reported by the daily newspaper Folha de São Paulo. A company owned by Wajngarten began to see a windfall from its contracts with pro-Bolsonaro television stations, thanks in part to an infusion of cash from the Secretariat of Communication, which Wajngarten himself runs. Despite the suspicions, Wajngarten was cleared of wrongdoing by Bolsonaro’s ethics council and kept in office.

A major political rally against the Congress and Judiciary — and in support of Bolsonaro — is scheduled to take place across Brazil on Sunday. Bolsonaro previously promoted the event via WhatsApp, but now denies having done so. As cases of coronavirus have increased in Brazil, Bolsonaro has downplayed the risks and organizers have so far refused to cancel the event.