Unable to Get Tested for the Coronavirus, Health Care Workers Fear They Are Infecting the Elderly

Even doctors who have been exposed to the novel coronavirus are often unable to get tested. 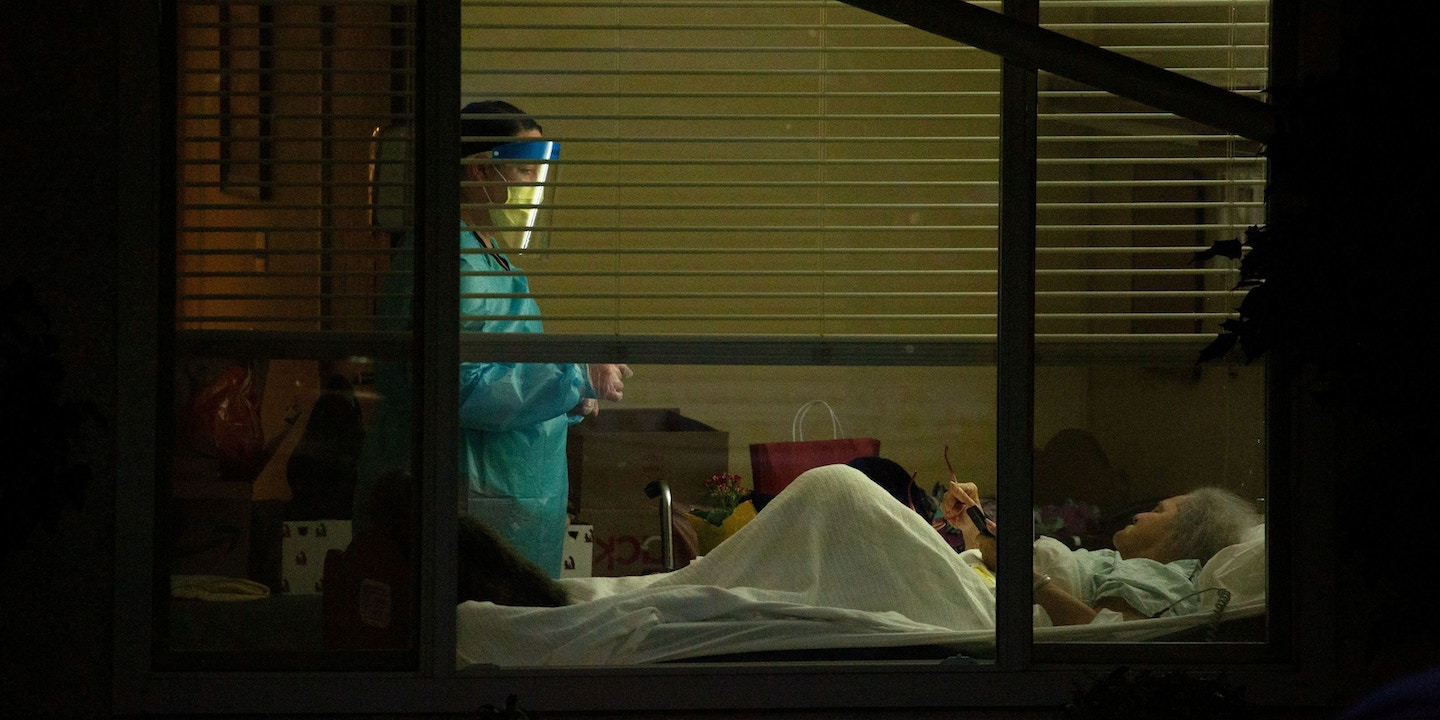 Dr. Jennifer Rhodes-Kropf has reason to fear that she might be infected with the new coronavirus. Just last week, her husband was sick with a dry cough after taking several flights and attending conferences. And this past weekend, her 8-year-old daughter had a high fever and cough. Rhodes-Kropf was able to get her daughter tested for the flu and cytomegalovirus, another common viral infection — and she was negative for both — but she hasn’t been able to get a coronavirus test for herself or anyone else in her family. And while everyone who hasn’t already had the viral illness now sweeping the world is now likely fearing for their health, Rhodes-Kropf has a particular reason to worry: She cares for 185 patients whose an average age is 91. And if she has the new coronavirus known as SARS CoV-2 and passes it onto them, it could be disastrous.

“They’re often very frail,” said Rhodes-Kropf, a geriatrician who practices in Boston. “If they do get the virus, a lot of them would not survive it.” A report released yesterday by the Centers for Disease Control confirms her fears, showing that 27 percent of 130 patients who contracted the virus in the Life Care Center of Kirkland, Washington, had died as of March 9.

Rhodes-Kropf, who is now seeing urgent patients after being fitted with an N95 face mask, tried to get tested. She asked her daughter’s pediatrician first and then inquired at a local hospital. But, even after explaining that she was a doctor caring for many elderly patients and had reason to suspect she might have been exposed, she wasn’t able to find a site that would test her. CDC testing guidelines say that coronavirus testing should be done on people who are residents of affected communities and have symptoms. Nevertheless, many people who are already ill with fever and the dry cough that is a signature of the viral Covid-19 infection are finding it impossible to get tested. For the asymptomatic, it is virtually impossible, even though there is ample evidence that they can spread the disease.

The widespread shortage of tests throughout the U.S. has hobbled the country’s ability to respond to the deadly coronavirus outbreak. Because people can be infected and pass on the virus without having any symptoms, identifying positive cases is critical for slowing its spread. While some transmission is being stemmed by social distancing and shelter-in-place orders, exceptions are generally made for doctors and other essential workers. Yet many of these critical front-line providers are themselves unable to get tested, leaving their vulnerable patients at particular risk and the health care workers themselves in a seemingly impossible bind.

“I took an oath to help older patients,” said Jennifer Brinckerhoff, another Boston-area geriatrician, who cares for 250 very elderly patients. “But I’m aware that by just coming in the door and having contact and conversations with my patients that I may be exposing them,” she said. “That feels ethically wrong.” On the other hand, Brinckerhoff said, she and her colleagues also find the idea of staying home from work very upsetting, “because if we don’t take care of the people there, they’re in their 90s.”

Like Rhodes-Kropf, Brinckerhoff has also tried and failed to get tested for the novel coronavirus. She reached out to her doctor’s office, who said that “you need a documented exposure to a confirmed case.” Although Brinckerhoff doesn’t have any symptoms of the illness and said she wouldn’t want to lie about it, she asked whether she could get tested if she had a fever. “And they said not under the current criteria.” And then Brinckerhoff along with several of her colleagues spent hours unsuccessfully searching for places where asymptomatic health care workers could be tested for the virus.

Brinckerhoff has been working remotely since Tuesday. But, because elderly patients often need help with eating, bathing, and other basic functions, they come into regular contact with a team of nurses, aides, and other caregivers — few of whom are likely to have access to testing.

The same is true of the family members the elderly rely on for help. “Everyone with dementia needs somebody,” said Virginia Templeton, executive director of MemoryCare, a nonprofit in Ashville, North Carolina, that provides outpatient care to patients with memory loss and their caregivers. MemoryCare, like many similar facilities, is just now in the process of shifting all appointments to telemedicine. While it has screened everyone walking into its facility for fever in recent days, “it’s really unclear who is a carrier if they don’t have the symptoms.” Templeton said she hadn’t been tested because she didn’t fit the criteria, but lives with a family member who is an emergency health care worker.

According to the CDC report published yesterday, staff of the Kirkland nursing home who came to work while infected with the virus, along with a shortage of protective equipment and the limited ability to test, contributed to the deadliness of the outbreak in Washington state. The report concluded that long-term care facilities should be “identifying and excluding potentially infected staff members and visitors, ensuring early recognition of potentially infected patients, and implementing appropriate infection control measures.” But it didn’t say how staff members should obtain those tests.

And the advice, which the federal agency published yesterday, is too late for nursing homes in Vermont, Illinois, Colorado, Texas, Florida, Oklahoma, and Wyoming, which are already reporting their own cases of Covid-19.