Amid the Covid-19 pandemic, legislators must grapple with postponed elections, emergency economic stimulus, and expected strains on health care from afar. 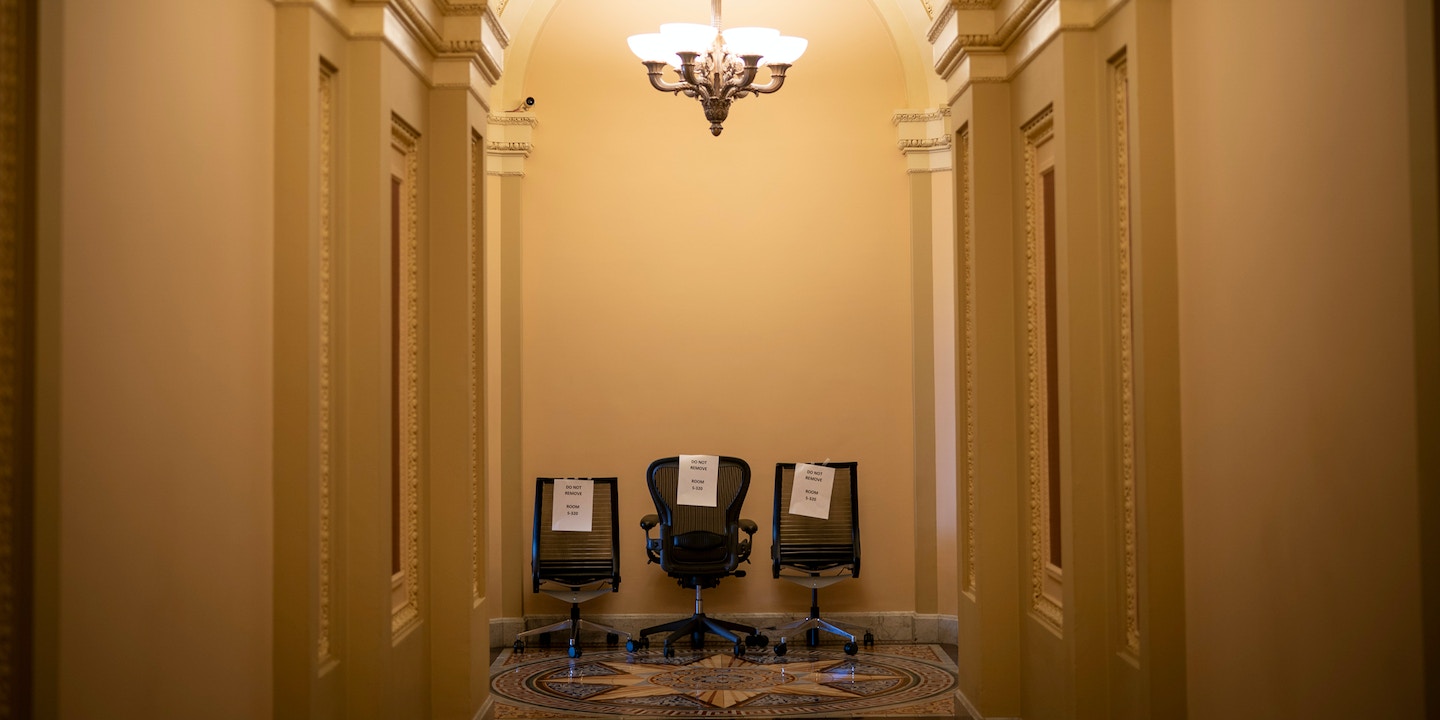 State legislatures have been suspended around the country over concerns about spreading the novel coronavirus Covid-19.

The sudden disappearance of legislatures comes at a time when urgent lawmaking and public oversight is needed most, as many states grapple with how to proceed with elections, suspended civil liberties, emergency economic stimulus, and efforts to manage the unique burden expected on the healthcare system.

The unprecedented crisis already forced some legislatures to temporarily shift to remote operations. On Monday, legislators in Pennsylvania and Utah announced a move to remote sessions of the state legislature. Pennsylvania lawmakers intend to work from home while passing new laws to give Gov. Tom Wolf authority to grant a public health emergency, expand telemedicine, and lift the state requirement on 180-day instructional days for students.

“We’re researching what other legislatures did in the past, what the British Parliament did during the plague,” says Connecticut state Sen. Matt Lesser, D-Middletown, one of the legislators studying the idea.

“As lawmakers fall sick, legislative sessions across the country are being cut short out of legitimate fear of the pandemic,” David Segal, executive director of Demand Progress and a former Rhode Island state representative, said in a statement.

“This crisis will only worsen,” added Segal. “It’s naive to assume that it will be possible to reconvene in a few weeks, so legislatures must make necessary changes to procedures now.”

Several state legislatures were evacuated in recent days to be disinfected, with some, including the Nebraska and Louisiana state legislature, potentially closed for weeks or longer. The Centers for Disease Control and Prevention recommend that no gatherings of 50 or more people take place, while the Trump administration has advised as few as 10 people per room — constraints that could prevent the reconvening of many legislative bodies.

Lesser said he has convened calls with other state lawmakers grappling with the same problem, with many states further restricted by state constitutions that would need to be amended for remote voting to take place.

“Is it possible to have a legislative session that meets remotely? Can we use Zoom and DocuSign?” Lesser asked. “If that’s the case, can you have a full debate on issues, full public participation that works with public meeting laws, and what does that look like? We’re behind the curve on this.”

“Is it possible to have a legislative session that meets remotely? Can you have a full debate on issues, full public participation that works with public meeting laws, and what does that look like?

Several states have laws or state constitutions that require legislative business to be done in settings that are open to the public on public grounds, such as a state capitol building.

The Arizona Attorney General Mark Brnovich, responding to the coronavirus crisis, has issued new guidance for how government entities may meet remotely under the open meetings law. The guidelines call for online meetings to be posted with 24 hours of advance notice on an open platform, and for speakers to identify themselves before they speak as they address an online audience. Presentations and other documents must be posted on the internet.

Many have urged the transition to vote-by-mail elections, to curb the public health risks around in-person voting. Other state lawmakers have discussed urgent reforms around waiving student testing requirements this year given school closures and the need to oversee the influx of new Medicaid funding expected in the upcoming stimulus package from Congress.

Members of Congress could face similar concerns as the public health crisis grows. The average age of the U.S. Senate is 61, and Democratic leadership of the House of Representatives is between the ages of 79 and 80, well within the ranges most vulnerable to Covid-19. Experts fear that the virus could incapacitate Congress when legislative oversight of the executive branch is needed most.

Last week, a coalition of government reform organizations circulated a letter to Capitol Hill leaders similarly calling for a short-term shift to “digital first” legislative approach that prioritizes “social distancing” recommended by the CDC while maintaining the functions of Congress.

“As both chambers admirably begin to implement steps toward telework for select staff,” notes the letter, “we encourage Congress to immediately begin working on ways that oversight and legislative work could be conducted online through existing commercial software and teleconference tools.”

Some voices in Congress, including Rep. Eric Swalwell, D-Calif., have circulated telework ideas for years. And in the aftermath of the attacks on September 11, congressional leaders and prominent government experts formed the Continuity of Government Commission to study what would have happened if a terror strike had destroyed the capital, or if it killed enough lawmakers that the Senate lacked the constitutionally mandated quorum.

In response, Sen. John Cornyn, R-Texas, and then-Sen. Russ Feingold, D-Wisc., sponsored a constitutional amendment to allow states to create expedited succession plans in the event of the sudden death or disappearance of members of the House of Representatives, on the recommendation of the commission. Other ideas included adding governors to the presidential line of succession and a new clause to the Constitution for a special election to replace the president. The commission recommended several fixes that were never acted upon.

Norm Ornstein, a resident scholar at the American Enterprise Institute, who was involved in the Continuity of Government Commission, has renewed the call for remote voting, claiming that secure software can be used for lawmakers to vote on legislation in emergency situations.

“If this becomes too dangerous to move or fly, I could see it get to the point with a special focused exception, we might be able to do some voting on a controversial bill at a distance,” said King. “I don’t recommend it. I think we’d have to get in a really special circumstance because once you break that mold, everyone wants to stay home and vote from their living room, and that’s not what we’re hired to do.”

Leadership in both parties, however, have rejected calls for remote voting this week. “We’ll not be doing that,” Senate Majority Leader Mitch McConnell, R-Ky., told reporters. House Speaker Nancy Pelosi, D-Calif., has also opposed the idea.