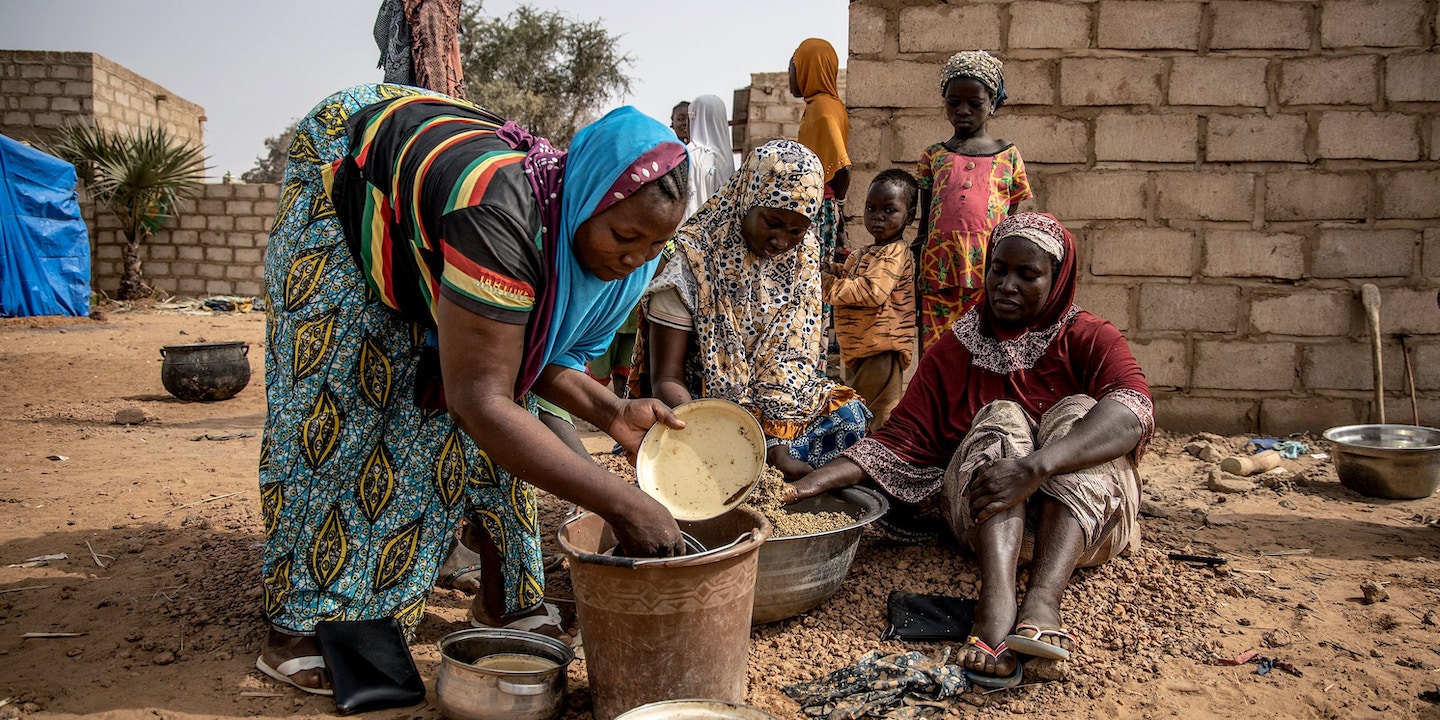 On March 18, Burkina Faso suffered the first confirmed Covid-19 fatality in all of sub-Saharan Africa. The victim was Rose-Marie Compaoré, the first vice president of the Sahelian nation’s parliament.

Burkina Faso has seen more than its share of hardships: poverty, drought, hunger, coups. But the coronavirus poses a new kind of threat to a country wracked by a war that has displaced around 700,000 Burkinabe in the last year. Many of those people now find themselves under great physical and emotional strain, lacking proper shelter, food, and the other necessities — all of which makes them more vulnerable to the pandemic. Experts fear that Covid-19 could decimate entire settlements of Burkina Faso’s displaced, and they are bracing for devastating outbreaks in conflict zones, refugee camps, and the poorest countries in the developing world.

Globally, millions of refugees and internally displaced persons, or IDPs, living in cramped, squalid conditions find themselves at risk. “When the virus hits overcrowded settlements in places like Iran, Bangladesh, Afghanistan, and Greece, the consequences will be devastating,” warned Jan Egeland, secretary general of the Norwegian Refugee Council, a leading humanitarian relief agency, in a recent statement about the dangers caused by Covid-19. He also spoke of “carnage when the virus reaches parts of Syria, Yemen, and Venezuela where hospitals have been demolished and health systems have collapsed.”

While the U.S. government and the media coverage have focused on individual vulnerabilities, like age and preexisting medical conditions, Jerry-Jonas Mbasha, the health cluster coordinator for the World Health Organization in Burkina Faso, also stressed the dangers of social vulnerabilities and the fact that the social status of IDPs makes them especially susceptible to the disease because they have limited access to basic social services, health care, safe water, sanitation, and hygiene. A failure to fully address these issues, he told The Intercept, would lead to high death rates.

I have no reason to believe Moumoumi Sawadogo had Covid-19 when I met him eight weeks ago in Burkina Faso. After living 89 years in an arid, impoverished land on the fringe of the Sahara Desert, surviving a massacre, walking for a week and enduring hunger and homelessness, it was clear that Sawadogo was a survivor. But Covid-19 posed a different kind of danger.

“These populations are already very vulnerable to diseases that are otherwise easy to treat. But that’s not the case when they have no access to water or proper sanitation or health care,” Alexandra Lamarche, senior advocate for West and Central Africa at Refugees International, told The Intercept. “We could watch entire populations vanish.”

In late January, Sawadogo was driven from his village, Rofenega, by jihadi militants. For the next week, he shuffled along with a walking stick through wind-whipped scrubland. He now lives in Kaya, a market town bulging with tens of thousands of displaced victims of terrorist violence who are scraping by without adequate food, shelter, or medical care. The town is at serious risk for an outbreak of Covid-19, which spreads rapidly and, according to a WHO study in China, can kill close to 22 percent of infected people in Sawadogo’s age range.

Rofenega is just one of scores of villages emptied by attacks from groups including the Al Qaeda-linked Jama’at Nusrat al-Islam wal Muslimin (better known by its acronym JNIM) and the Islamic State in the Greater Sahara. Over the last five years, militant Islamist violence in Burkina Faso has skyrocketed from four jihadi attacks in 2015 to 450 in 2019, according to Héni Nsaibia, a senior researcher for the Armed Conflict Location and Event Data Project.

The violence has worsened living conditions in Burkina Faso, which is home to just under 21 million people, more than 1 million of whom are food insecure; nearly 2 million are now in desperate need of water, sanitation, and hygiene support, and 2.2 million require humanitarian assistance. The number of IDPs, which stood at just 60,000 at the beginning of 2019, will soon reach 1 million, and most who have fled are living in host communities, like Kaya, where more than half the displaced population is homeless or lacks adequate shelter. “Refugees and migrants, as well as urban poor communities who live in highly dense populations, are particularly vulnerable to respiratory infections, including Covid-19,” said Dr. Margaret Harris, a WHO spokesperson.

The U.N. Refugee Agency is pressing governments to include displaced populations in their Covid-19 response plans, Romain Desclous, the agency’s regional spokesperson for West and Central Africa, told The Intercept. “Everyone — including refugees, asylum-seekers, and IDPs — should be able to access health facilities and services,” he said. While Burkina Faso has recently adopted a Covid-19 response plan that takes IDPs into account, it doesn’t change the fact that 135 health centers in the country have closed due to violence, 140 have reduced their services, and 1.5 million Burkinabe now depend on humanitarian health assistance. Covid-19 will exacerbate an already dire situation.

“In Burkina Faso, people already struggle to access government health centers when they’re displaced, and that’s going to affect the situation if the virus begins to spread,” Lamarche told The Intercept. “The prospects are incredibly grim because there isn’t enough infrastructure or a strong enough health system — whether government or humanitarian-led — to detect and treat these cases.” Meanwhile, the burden on the remaining medical facilities continues to grow as attacks make access more difficult and concentrate IDPs in already overburdened towns.

“People already struggle to access government health centers when they’re displaced, and that’s going to affect the situation if the virus begins to spread.”

Sawadogo remembers the raid on Rofenega as a chaotic blur punctuated by gunfire. The long-legged octogenarian with rheumy eyes and a white beard seemed dazed by the violence that had left him homeless and destitute. “I’ve never seen a situation like this in my life,” he told me as he sat on a woven mat along the side of a road in 90-degree heat.

Other survivors of the attack on Rofenega recounted a story that is increasingly common among farmers and cattle herders in rural Burkina Faso. Armed men on motorbikes roared into villages just before dusk and begin shooting. “They shot our men at the gates of our homes,” Dialla Seybata, a 50-year-old survivor of the massacre, also stranded in Kaya, told The Intercept. The militants killed 15 people in Rofenega, Seybata said, including her husband, a son, and two other relatives. “We ran. We couldn’t even bury the bodies. We — 20 women and children together — walked for 8 kilometers to get here.”

It took Sawadogo nearly seven days to cover that same distance. Frail and unable to walk even a short distance without difficulty, he was forced to travel alone after the rest of his family fled in a different direction. Carrying only a walking stick polished smooth by years of use and a well-worn blanket, Sawadogo hobbled along the dusty roadside almost the entire 8 kilometers from Rofenega to Kaya, finally catching a ride on a donkey cart for the last leg of the trip. Along the way, he spent all his money on food and had to beg to avoid going hungry. When I met him, a distant relative had just agreed to take him in, even though it meant that Sawadogo would now be one of the many displaced in a home overflowing with people, including several other relatives also recently made homeless by violence.

While Sawadogo was grateful to have a roof over his head, such living situations are considered particularly dangerous in the age of Covid-19. “You have entire families, or multiple families, or families with multiple wives and a massive brood of children, staying in poorly built shelters, and that means that coronavirus is likely to spread very rapidly,” said Lamarche.

Mbasha, the WHO coordinator, echoed these warnings, noting that the disease taking hold in IDP camps would lead to a crisis like that in China or Italy, two countries that have suffered some of the most Covid-19 deaths. If humanitarian aid and the response to the pandemic isn’t swift, it could result in a “very big failure to control the spread of the disease,” he told The Intercept. There is only a very short window in which to act, he said. “That time is now and not tomorrow.”

Nick Turse is a reporter with Type Investigations. This article was reported in partnership with Brown University’s Costs of War Project.