In New Jersey Prisons, 29 Coronavirus Deaths and Only 184 Tests

Prisons have become hotbeds for the virus and vectors into surrounding communities. But without testing, we have no idea how many people are infected. 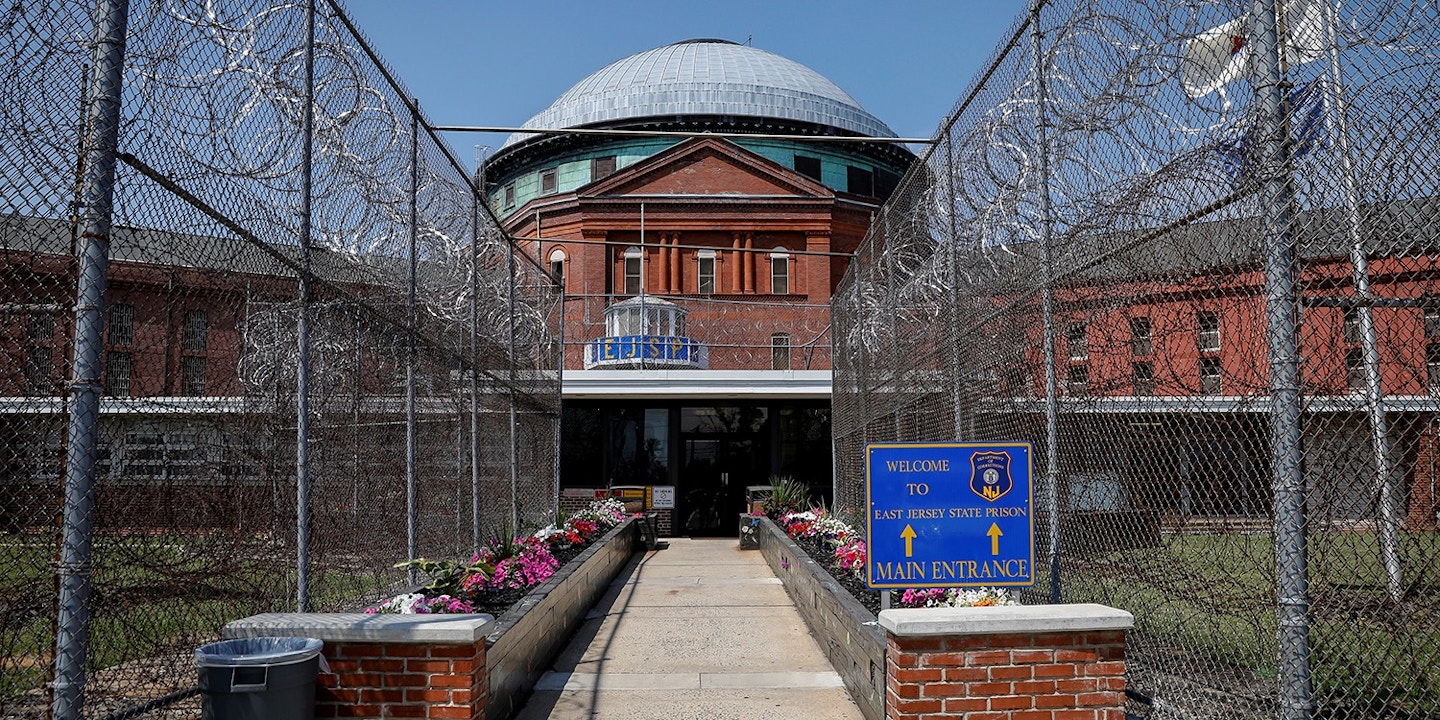 When Boris Franklin started seeing social media posts by people with loved ones incarcerated in New Jersey prisons, he knew the state had a problem it would soon be unable to ignore.

One woman, whose brother is incarcerated at Northern State Prison, in Newark, said that he had been experiencing Covid-19 symptoms — as had nearly everyone else in his housing wing. But prison officials were denying requests for tests to all but those ill enough to be hospitalized. “There was no way to get off the wing or see a nurse unless you could not breathe,” said Franklin, an organizer with the faith-based New Jersey Together coalition, who himself was incarcerated for 11 years.

At Mid-State Correctional Facility, in early April, 36-year-old Ricky James called his mother to tell her that he was sick but could not get a test. “They don’t care if we die,” she said he told her. Two days later, James was dead, and the wing where he had been living was put on lockdown. “Around lunchtime and dinnertime, they would bring Styrofoam trays. They would roll them in there, and they would just shut the door and the guys were basically left on their own,” said Franklin, who spoke with a man incarcerated at the facility. “They wouldn’t test anyone.”

Like New York, New Jersey has been at the epicenter of the coronavirus crisis in the United States — with more than 6,000 deaths so far. But as the state’s curve begins to flatten and new reported cases gradually drop, an opposite trend is emerging in New Jersey prisons, where deaths are quickly multiplying. As of Monday, according to official figures, 29 people had died in New Jersey’s corrections facilities, up from 19 just three days earlier.

And yet only 184 inmates have been tested for Covid-19 across New Jersey — less than 1 percent of the state’s incarcerated population. About 79 percent of those tested have tested positive, and 20 percent of inmates with positive tests have died. Because of the lack of testing, the official number of confirmed cases — 145 — is inevitably an enormous undercount.

“When the Covid-19 crisis hit, New Jersey — like much of the nation and the world — faced an unprecedented situation: the lack of access to testing,” a spokesperson for the New Jersey Department of Corrections wrote in a statement to The Intercept. “Despite this challenge, the NJDOC immediately took action to mitigate the spread of the virus and share with staff information about available testing. As the capacity to expand testing has begun to open up, NJDOC has been working diligently on a plan to expand testing for inmates and staff.” New Jersey Gov. Phil Murphy did not immediately respond to a request for comment.

“The rest of the state is slowing down and we’re doubling,” William Sullivan, the president of the local corrections officers’ union, told The Intercept. “They kind of forgot about us. We have an older population with the inmates, everybody’s confined, there’s no social distancing, the tiers are low, the bars in some units are open, so there’s no solid doors to block anything.”

“It’s just complete neglect for individuals who are incarcerated,” said Franklin, echoing Sullivan’s point about the close quarters of prison housing units. “What I’m hearing directly from guys on the tiers is, almost everyone on their tier has experienced some of the symptoms, the body aches, the headaches. But anything in the absence of short breath, they are not dealing with. If you’re not on your way to immediate death, then they’re not dealing with it.”

Testing limitations have crippled the U.S. response to the pandemic from the very beginning. But as jails and prisons have become Covid-19 hotbeds and vectors of the virus into the surrounding communities, the failure to test incarcerated people reveals more than just a problem of access. “They don’t want to do the testing because if you do the testing you are going to find that a great portion of the prison population has come in contact with Covid-19,” Franklin said. “If you don’t test, you don’t report, and then you don’t have to act.”

“My theory is that they don’t want the prison numbers to actually come out because it would look really bad, like the nursing homes,” echoed Sullivan. “If you test everybody, those numbers are going to skyrocket and that’s not going to look too good. I think they just wanted to try to mitigate and keep things in-house.”

At a briefing on Monday, Murphy said he “believed” the state was testing in prisons — before another official clarified that the state was “working on a broader plan for the prison population.” New Jersey’s health commissioner, Judith Persichilli, added that officials were working with a testing strategy task force, and that while the parameters for what counted as “vulnerable populations” were being refined, “corrections” was included.

That’s hardly enough for advocates, who started raising alarm about the state’s prisons long before the deaths skyrocketed — and who now worry it may be too late. Frank McMillan, a lead organizer at New Jersey Together, told The Intercept that for weeks the group has been pushing local officials to address the approaching disaster in the state’s prisons, first reaching out in March and constantly pressing them to increase testing. When officials announced on March 23 that they would release 1,000 incarcerated people — one of the country’s first efforts to address the crisis by reducing the incarcerated population — the group asked whether there were any plans to test those people before they returned home, mostly to poor communities of color that were already bearing the brunt of the crisis.

“In various ways they said, ‘We’re having trouble doing that for the general population. We can’t prioritize these people,’” said McMillan.

Sullivan said that the corrections officers’ union has also been asking the governor’s office to test all corrections staff since March but has never heard back. The corrections department says that 495 “employees” have tested positive for the virus, but Sullivan said that figure, too, is an undercount. “I know there are more positive than what’s on the website because the officers sent me their test results,” he said. Sullivan noted that at least 465 members of his union have tested positive, and that two have died. The union has been setting up sites to test its own members — for free if they are symptomatic, and for a fee if they are not. “But it should really be coming from the governor’s office, not from the union,” he added.

Things are more complicated for inmates, Sullivan conceded. “You can’t do a test at the jail, you actually have to take an inmate with two officers and shackle him and bring him to a hospital for a test. If you had to test 19,000 inmates, that’d be a lot of trips to the hospital. They really need to streamline testing the inmates.”

“We sent our request on March 25. We were trying to get ahead of the curve,” Sullivan added. “It would have been nice if they had considered our requests earlier on. They might have saved a lot of heartache.”

New Jersey is hardly alone in its failure to test incarcerated people. In New York state, where nine prison inmates have died of the virus so far, 310 have tested positive. But the number of corrections staff who tested positive is more than 1,000 — a disparity that critics warn is indicative of different access to testing.

That disparity is even starker in some jails, where the risk of exposure is higher — people move in and out more regularly, share tighter quarters, and generally have poorer access to health care. At Rikers Island, for instance, where the estimated rate of infection is a staggering 9.9 percent, 381 incarcerated people have tested positive, compared to at least 966 corrections staff.

At least 171 incarcerated people have died of Covid-19 in jails and prisons nationwide, according to a tally kept by the University of California, Los Angeles School of Law. The rapidly climbing death toll is becoming the only way to glimpse the full picture of a crisis that testing is failing to capture.

There are some exceptions: At the Marion Correctional Institution, a prison in Ohio that has emerged as one of the largest coronavirus hot spots in the country, almost all the 2,500 men incarcerated there have received tests. More than 80 percent tested positive.

Update: April 28, 2020, 6:28 p.m. ET
This article has been updated to include a statement from the New Jersey Department of Corrections received after publication.