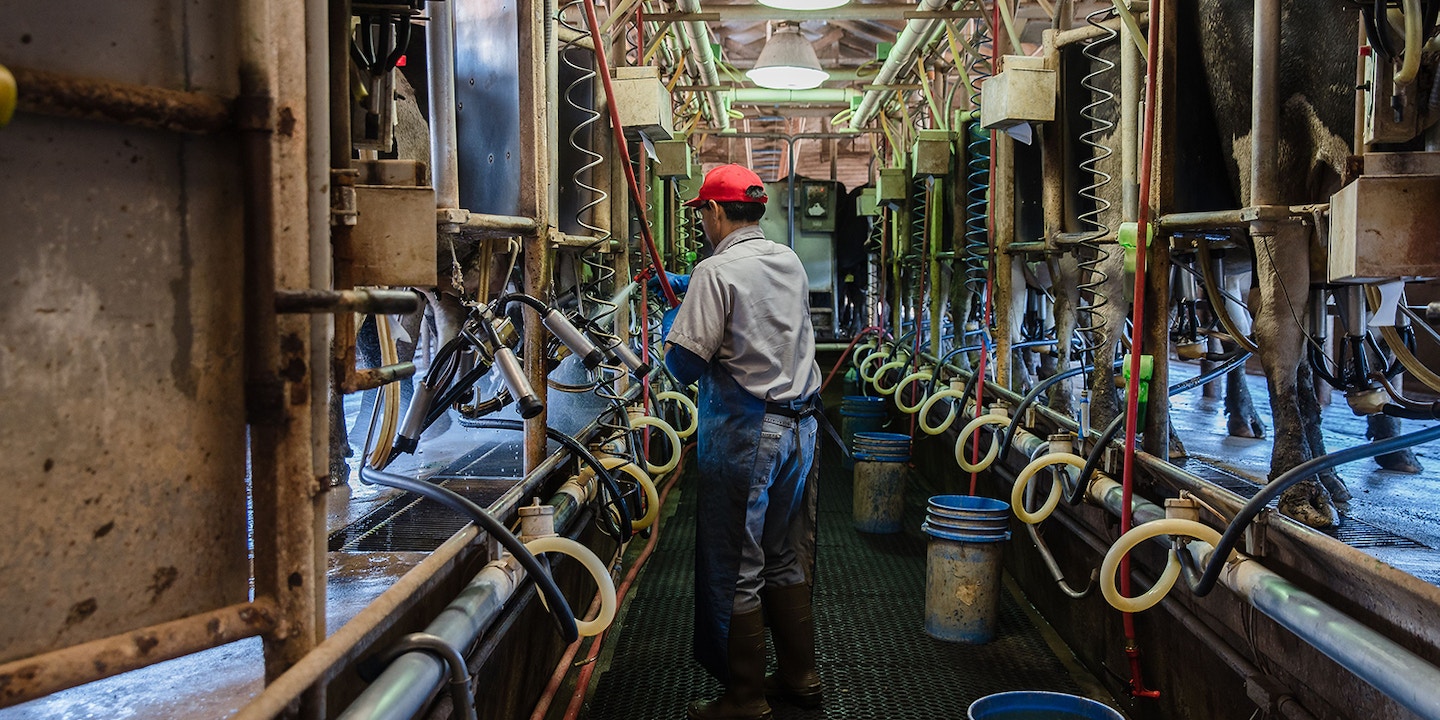 Before coronavirus hit, farmers in the U.S. were already hurting from years of falling food prices, severe weather, and, more recently, President Donald Trump’s trade war. “We’ve had a record number of farm bankruptcies [in the U.S.], total farm debt is at $425 billion, [and farmer] incomes have fallen by about half since 2013,” said Eric Deeble, policy director at the National Sustainable Agriculture Coalition, which supports small and mid-sized family farms.

Now, with the global pandemic closing factories and restaurants and disrupting supply chains, already stressed farms are grappling with lower demand and fewer markets to sell in, as well as a presidential administration that favors relief for big businesses over small. Small farmers in particular — those who sell directly to farmers markets, schools, and other local food hubs — are facing an existential crisis, as they face slim odds of accessing competitive federal stimulus money.

They have reason to be pessimistic. In recent years, federal subsidies to help struggling farmers have flowed almost exclusively to large corporate farms. Of the roughly $28 billion the Trump administration has distributed to food producers to offset losses from his trade wars, almost all went to big farms.

Advocates for small farmers say this is driven in part by the preference of Trump’s agriculture secretary, Sonny Purdue, who has encouraged farmers to get bigger farms if they wanted to stay in business. “Big get bigger and small go out … and that’s what we’ve seen,” he told a group of Wisconsin dairy farmers in 2018, echoing Richard Nixon’s agriculture secretary, who infamously told farmers in the 1970s to “get big or get out.” While 91 percent of U.S. farms are small — defined by the federal government as an operation with gross cash income under $250,000 — large farms account for 85 percent of the country’s farm production.

The public health crisis has already had a devastating impact on agriculture across the country. A report released in mid-March by the National Sustainable Agriculture Coalition estimated that small farms would see a $689 million decline in sales from March to May this year due to Covid-19, leading to a payroll decline of $103 million and a total loss to the economy of $1.3 billion. Now, as the pandemic shows no sign of slowing, the coalition worries that the impact for small farmers will be even more substantial — which could lead many small farms to permanently close.

Under pressure from groups like the National Sustainable Agriculture Coalition and the National Farmers Union, Congress did work to address some of the needs of small and direct-market farmers in the $2 trillion Coronavirus Aid, Relief, and Economic Security, or CARES, Act, signed into law on March 27. While lawmakers did not include all that advocates pressed for — like emergency food purchases from small processors and direct payments to small farms — the CARES Act did allocate $9.5 billion to farmers and said some (unspecified portion) of that amount should go to “producers that supply local food systems, including farmers markets, restaurants, and schools.”

But in the weeks following the CARES Act, farmers struggled to access any relief, as the agriculture aid stalled and many farmers found themselves ineligible for the Small Business Administration emergency loans. On April 10, 33 senators sent a bipartisan letter to Purdue, urging the USDA to follow the CARES Act and distribute federal aid to small farmers specifically. A week later, when the USDA finally announced how it planned to allocate the $9.5 billion from the CARES Act, it appeared that no money would be reserved specifically for small farmers.

In a statement provided to The Intercept, a USDA spokesperson said the department planned to provide assistance to “most farms” that experienced at least a 5 percent loss. To ensure that funding will help small farms, the USDA said it “is utilizing payment limits and [adjusted gross income] eligibility criteria that were used by Congress when developing the 2018 Farm Bill” — the same bill that left small farmers in the lurch over the last two years. The spokesperson also said that the USDA planned to use a $900,000 AGI limit for those who do not make 75 percent or more of their income from farming — a notably high threshold considering that small farmers earn between $1,000 and $250,000 from their farms.

“Bailout money always goes to the big farmers, the people who produce soy and crops and sell into commodity markets,” said John Peck, executive director of Family Farm Defenders, a national organization that supports sustainable agriculture. “This is all part of our country’s cheap food policy where we basically subsidize capital-intensive, large-scale industrial farming.”

“Small diversified farmers are pretty effective at doing what they do, which is finding markets and filling them, and haven’t required a lot of support,” said Deeble. “But the flip side is if you’re usually good in normal times and don’t rely much on the government, it can be harder to get government help when you need it.”

J.D. Scholten, a Democratic House candidate running in Iowa’s 4th Congressional District, said there’s still a lot of uncertainty about how the federal stimulus money will be allocated, “but what we’ve seen [since the trade wars] is that Secretary Purdue gets to dictate who gets bailed out and who doesn’t, and there’s not a lot of oversight.”

Colby Ferguson, a small farmer and the director of government and public relations for the Maryland Farm Bureau, defended the bulk of federal subsidies flowing to large farms. “They should get most of the money since they generate the most volume of our food supply,” he said. “If we didn’t help the big guys, that would also affect the small guys.”

The Farmers Market Coalition, a nonprofit that supports local markets across the country, has also been pushing for emergency aid and a federal declaration that farmers markets should be allowed to operate as essential businesses. (California has deemed farmers markets essential, but other states have shut them down or left it more ambiguous.) Advocates say open-air markets can serve as a safer way to buy groceries during the pandemic.

“If farmers markets go out of business that means local farmers lose access to those consumers,” said Ben Feldman, executive director for the Farmers Market Coalition. While American food purchasing has swiftly shifted during the pandemic from restaurants to grocery stores, it is typically much harder for small farmers to sell their products to large grocery stores. “I don’t want to be alarmist, because farmers market operators, like the farmers who sell to them, are very resilient and adaptable and do an incredible amount with very limited resources,” said Feldman. “But this could definitely force markets to close.”

According to the USDA, local food sales more than doubled between 2012 and 2017. But profit margins for small farmers remain low or nonexistent, and most small farmers also have other jobs.

Peck of Family Farm Defenders said he worries this pandemic will be exploited by big corporations to crush the local food movement and correspondingly wreak further damage on the climate. “To feed the world and cool the planet, we need to move away from industrial agribusiness,” he said.

Some advocates say they’re cautiously optimistic that the next stimulus bill could offer more help to small farmers and noted that there’s been growing public awareness of the risks posed by our global supply chain and the need to invest in a more resilient food system.

Scholten, who has been sounding the alarm for years about the risks of monopolized agriculture, said the pandemic exposes how “dangerously dependent” we are on imports. “We’ve had these ‘get big or get off the farm’ policies for years,” he said. “But I think there’s huge potential now to regionalize our food production, localize it.”

“In the 4th District of Iowa, the second-most agricultural producing district in the nation, we have only two farm-to-table restaurants; we have small towns losing their grocery stores because Dollar General is coming in and undercutting them, but they don’t sell fresh produce and meats, and we have farmers not making a dime,” he said. “So who are we doing this [production] all for?”