Donald Trump praised protesters who harassed a journalist on Long Island this week at a rally where one man called for the execution of Dr. Anthony Fauci. The president of the United States voiced his support on Saturday for a protest against New York state’s public health orders that was backed by an anti-government militia and anti-vaccine activists who called for the execution of Dr. Anthony Fauci, the nation’s senior immunologist.

The “Re-Open NY” rally on Thursday in Commack, New York was organized by a group of Trump supporters who call themselves the Setauket Patriots, but also endorsed by anti-vaccination activists and the Long Island branch of the Oath Keepers, a national organization of current and former law enforcement officers and military veterans who think they are defending the nation from a range of imaginary threats posed by the federal government.

Amid a sea of American flags and Trump banners, several of the signs waved by the protesters referenced conspiracy theories promoted by radical anti-vaccine activists that demonize Fauci and the philanthropist Bill Gates. 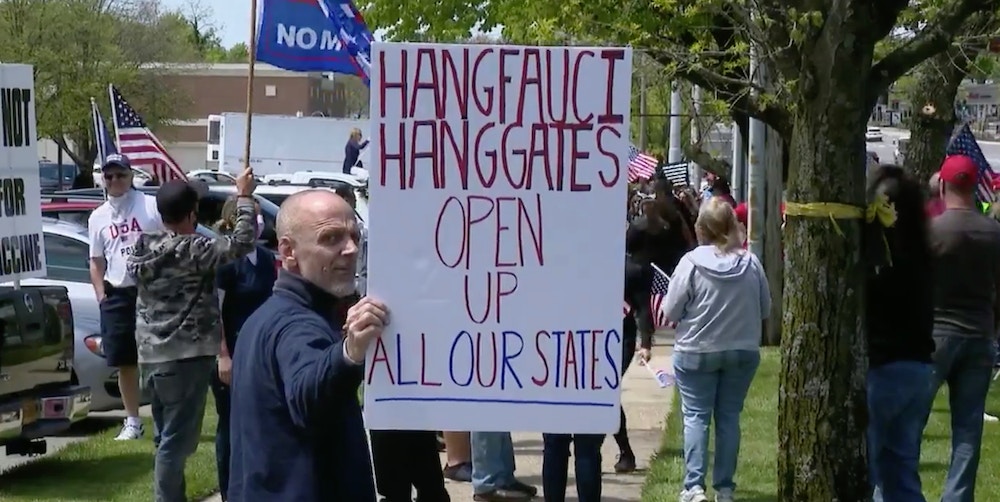 A protester at a rally in Commack, New York on Thursday displayed a sign calling for the execution of the nation’s leading immunologist and a billionaire philanthropist.

In addition to placards calling for New York to open businesses, others displayed at the rally channeled conspiracy theories from anti-vaccine activists who believe that Bill Gates is somehow behind the crisis. “Just Say NO to Bill Gates,” read one sign. Another, with idiosyncratic punctuation, read: “My Son’s Are Not Lab Rats For Bill Gates Vaccine.”

The protest outside a shuttered department store was attended by just a few hundred people, but it drew national attention after a local news reporter, Kevin Vesey, posted video of himself being harassed by demonstrators.

The level of anger directed at the media from these protestors was alarming. As always, I will tell a fair and unbiased story today. pic.twitter.com/5jCR0YY9VH

The protesters echoed the president’s anti-media harangues by complaining to Vesey that his channel, News 12 Long Island, had “stopped airing the Trump briefings,” and taunted him with the chant, “Fake news is not essential.” One woman told the reporter, “You’re the virus.” Another accused him of “destroying Suffolk and Long Island” through his reporting on the coronavirus crisis.

Suffolk County, where the protest took place, has been among the worst hit in the United States, with 37,942 confirmed cases of Covid-19 and 1,733 deaths as of Saturday. That means the suburban New York county of just under 1.5 million people has a mortality rate more than 4 times the national average. One of those cases was News 12’s Vesey, who tested positive last month and recently recovered from a relatively mild case of the illness.

During a longer Facebook Live report from the demonstration, Vesey was menaced at close range by a man in a Trump hat and shirt who was not wearing a mask but said that he did not need to keep his distance because, “I got hydroxychloroquine; I’ll be fine, bro.”

The man held a sign that called on one side for New York’s Democratic governor, Andrew Cuomo, to be deposed, and on the other accused his brother, Chris Cuomo, of lying about his bout with Covid-19.

Another protester held up a sign saying Fauci “has to go” and falsely asserted that he “works for” for the World Health Organization.

The television report Vesey filed on Thursday evening included video of one of the demonstrators displaying a sign for the camera that read: “Hang Fauci, Hang Gates, Open Up All Our States.”

I'll probably never forget what happened today.
I was insulted. I was berated. I was practically chased by people who refused to wear masks in the middle of a pandemic.
All the while, I was there to tell THEIR story. Here's the finished product. pic.twitter.com/HV2Hrcs7gi

On Saturday morning, in a tweet that echoed his infamous praise for white supremacists who marched in Charlottesville in 2017, Trump described the protesters who had harassed the reporter as “Great people!”

James Robitsek, a leader of the pro-Trump Setauket Patriots group that organized the protest, confirmed in a Facebook message on Saturday that his call for opponents of the lockdown to rally had been supported by the local chapter of the anti-government Oath Keepers militia. “They copied my post and made up their own for their group,” Robitsek said of the Oath Keepers. “They come to our events and vice versa. We all share events, our group is only 40-50 members.” Thursday’s gathering, he said, included “many people from other groups, or who just saw the post and wanted to come down.”

The Oath Keepers’s name is a reference to the belief of its members that they are bound by their pledge to “defend the Constitution against all enemies, foreign and domestic,” even if that means defying the government. As Justine Sharrock reported for Mother Jones in 2010, a year after the group was founded, some of the group’s first members were convinced then that it would not be long “before President Obama finds some pretext — a pandemic, a natural disaster, a terror attack — to impose martial law, ban interstate travel, and begin detaining citizens en masse.”

In an open letter posted online last month, the Long Island branch of the militia group echoed that belief, by declaring that the state’s orders to shut down businesses, churches and public gatherings were the acts of “an overbearing government acting under the guise of benevolence” and had created “an untenable situation” that justified resistance. “Any government, or governing representative which acts in such a manner, attempts to act outside of the Constitution, and must be put on notice as doing such,” the group wrote.

The national group’s founder, Stewart Rhodes, a libertarian trial lawyer and former Ron Paul staffer, mocked Trump earlier this week for tweeting in support of protesters in Pennsylvania who want to re-open businesses. “Uh, they are using YOUR Admin’s guidelines, including the Orwellian ‘essential/non-essential’ paradigm, which is like something out of the USSR,” Rhodes tweeted back at the president.

On Twitter, Rhodes has also shared anti-vaccine conspiracy theories related to the Covid-19 pandemic, including one meme that described Gates as a “vaccine pushing globalist eugenicist” and urged readers “to REFUSE to take ANY vaccine he funds, ‘mandatory’ or not.”

He also encouraged his followers to listen to a podcast in which Robert F. Kennedy Jr. attacked Gates and boosted a conspiracy theory about Fauci. The baseless smear on Fauci was first made by a discredited scientist who claims, without evidence, that the National Institute of Allergy and Infectious Diseases director buried her research about how vaccines can damage people’s immune systems. Those false claims about Fauci and Gates have been spread widely by the pro-Trump conspiracy group QAnon and by prominent anti-vaccine activists who have taken a leading role in recent protests demanding an end to the emergency public health orders in California, Texas and New York.

Robitsek, the Setauket Patriots’ leader, insisted that three of the people seen in Vesey’s video harassing the reporter were “not associated with our group” and suggested that at least one of them — the man who had refused stay away from the reporter — might have been “a plant by left leaning groups in the area who were against our rally coming to Commack.” If so, the man has been under deep cover for some time, since a photograph on the Setauket Patriots Facebook page shows that he was also at a previous protest at the same spot two weeks ago. On that occasion, which was also covered by Vesey for News 12 Long Island, the man made no attempt to harass the reporter and did nothing to tarnish the reputation of the protesters.

As for the woman who told Vesey he was the virus, Robitsek called her “a wacko,” and noted that she travels to protests all across the tri-state area of New York, New Jersey and Connecticut provoking confrontations and filming them for her group’s Facebook page.

Robitsek, who said that he has been unemployed for almost nine weeks and is yet to receive any payment from the state, cast the rally as a non-partisan attempt to push New York to let people earn a living. “We all need to work,” he said. “Give me my unemployment, and I’ll stay home then but I need to pay my bills and eat. People are getting desperate.”

Anxious to counter the negative publicity generated by Vesey’s video, Robitsek also suggested that a “local moms group” that was opposed to the rally had been “in cahoots with the media before it even started.” But the only evidence he could cite for that was a screenshot of a Facebook post from a member of the group Commack Parents Network, in which she had simply passed on an interview request from Vesey, saying that he would like one or more of them to explain why they were opposed to the re-opening protest taking place in their town.

Robitsek also said that his group had agreed not to wave Trump flags, in a bid to be bipartisan, but many members of other groups who came to the rally did so. For his part, Robitsek wore what appeared to be one of Trump’s red caps, albeit a more understated one — with “USA” stitched on the front and “45” on the side — and a mask, while carrying an American flag. In addition to his group and the Oath Keepers, Robitsek said, members of the Conservative Society for Action also attended the rally, as did, “a bunch of anti-vaccine people.”