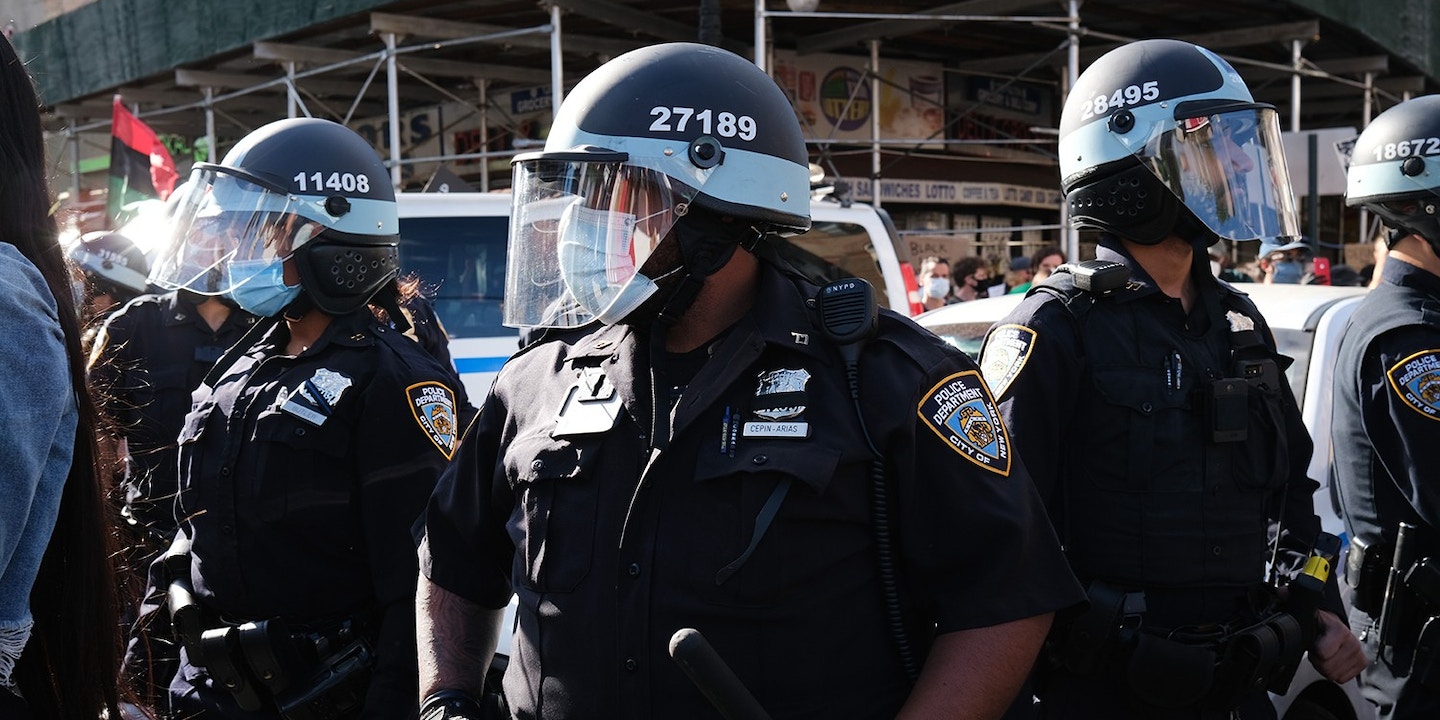 New York Police Department officers policing the protests in New York City are increasingly covering their badge numbers with black bands, making it difficult for people to identify them and hold them accountable for their actions. On Wednesday, the National Lawyers Guild sent a letter to the department and to the city’s corporation counsel, warning that if the NYPD doesn’t put an end to the practice, it could expect a lawsuit.

“The trend of individual officers to sidestep what minimal accountability exists, in order to more effectively and with greater impunity brutalize protesters for pretextual reasons, is unacceptable.”

The practice of police obscuring their badge numbers — a form of identification that many jurisdictions require officers to make available to the public when interacting — has taken on a heightened significance amid the nationwide protests over the killing of George Floyd by Minneapolis police. The protests have been met with a show of force from officers, sometimes veering into brutality, leaving the risk that those without visible identification are acting with the very impunity to commit violence that spurred the protests in the first place.

The NYPD has strict regulations around displaying badge numbers — and a history of suppressing protests with violence and without accountability.

Covering badge numbers, the National Lawyers Guild letter asserts, “serves to prevent aggrieved individuals from being able to identify the perpetrators of police misconduct or relevant witnesses to same, and the failure of the NYPD to stop this practice provides a sense of impunity to members of the service that they can violate demonstrators’ rights without consequence.”

Andy Izenson, president of the New York City chapter of the National Lawyers Guild, who signed the letter, told The Intercept that covering badge numbers was particularly troubling during a time of widespread protest when documented police violence is already a problem. “The trend of individual officers to sidestep what minimal accountability exists, in order to more effectively and with greater impunity brutalize protesters for pretextual reasons, is unacceptable,” Izenson said. “Not only along legal standards, but for moral ones as well.”

There’s ample evidence that the NYPD tolerates the practice. Videos from recent protests, as well as The Intercept’s reporting from around New York City over the past week, have shown officers with their badge numbers obscured while standing in close proximity to their white-shirted supervisors. (The department did not immediately respond to a request for comment.)

At a tense standoff between bouts of violence at the corner of Bedford and Tilden avenues in the Flatbush neighborhood of Brooklyn on Saturday afternoon, an Officer Meneses, whose badge was covered by a black band, explained. “We wear it when one of ours is fallen,” he said. But why was the band covering up his badge number? he was asked. Meneses shrugged. “It’s old,” he said. “It fell down.”

The fact that the practice appears not only to be the individual act of specific cops, but an acknowledged pattern tolerated within the department, could make the city — and not just individual officers — answerable to a lawsuit, according to the National Lawyers Guild. “The failure to stop this activity also may subject the City to liability,” Izenson wrote.

The police department’s Patrol Guide permits the wearing of black bands for short periods after an officer’s death, but forbids officers from using those bands to obscure their badge number.

In mid-April, Police Commissioner Dermot Shea tweeted his own badge wrapped in a black band, explaining, “We wear these in quiet commemoration of our 27 brothers and sisters we’ve lost to #COVID.” The police department has been especially hard-hit by the coronavirus pandemic. While the close contact the job necessitates may have to do with the coronavirus death toll among officers, many have also been documented refusing to wear masks.

“What is novel is that there seems to be a collective sense that there will be no discipline for violating the Patrol Guide.”

Chris Dunn, legal director for the New York Civil Liberties Union, said there’s a long history of New York City police covering their badge numbers by any number of methods. “This is not a new phenomenon,” Dunn said. “There have been numerous prior instances of mourning bands concealing badge numbers.”

“There’s no question you’ve seen this on an individual level forever,” said Remy Green, a lawyer who helped draft the National Lawyers Guild letter. “What is novel is that there seems to be a collective sense that there will be no discipline for violating the Patrol Guide.”

If the city wishes to avoid the threatened lawsuit, Izenson said, it should take decisive steps by the end of Thursday to direct officers not to cover their badge numbers.