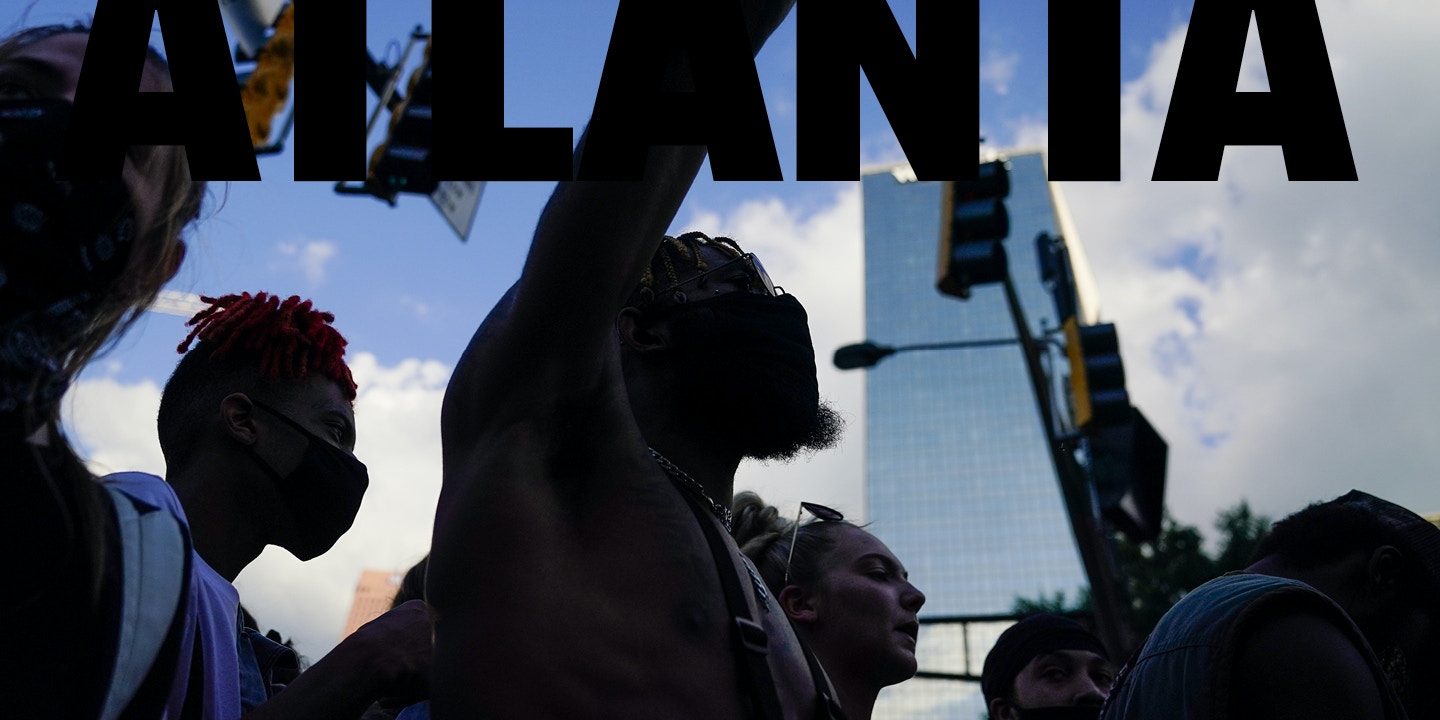 Two muscle cars pulled up to the corner of Marietta Street and Centennial Park Drive in the middle of the Atlanta protest Wednesday, to do burnouts across from CNN Center. Clouds of smoke covered protesters, screening them instantly from the police riot line. A whoop rose. People crowded around the cars — Dodge Chargers, the semi-official Atlanta car of choice — while Migos blared from the trunk. People turned their back to the cops and started dancing. No one batted an eye.

The days of defiance here in the wake of the killings of Ahmaud Arbery and George Floyd have been half police misconduct protest rally and half carnival, even on the nights of broken glass along Peachtree Street. Incongruity abounds. Women shooting music videos in front of a line of shield-bearing soldiers one day, the National Guard breaking out into dance with protesters on the next.

Tayla Myree, 22, had prepared herself Monday to confront tear gas and white supremacy, not burning rubber. She was there to take on the city’s police force, particularly its partnership with the Israel Defense Forces. “People need to be doing teach-ins. People need to be reading. People need to be talking to each other,” the recent Syracuse history graduate said. In the moment, she yearned for organization and direction, to capture value from defiance even as Mayor Keisha Lance Bottoms invoked Martin Luther King Jr. and sternly called the protests “chaos.”

“King was very radical, specifically for his time,” Myree said. “Civil disobedience works. He was breaking the law. To have someone like Keisha Lance Bottoms actually weaponize Martin Luther King’s history against the people of Atlanta pisses me off.”

Saturday night, protesters in a parking lot next to Ted Turner’s downtown penthouse held off a phalanx of riot cops for half an hour. Then Andrew Young Boulevard exploded — into a pop-up dance hall, with revelers firing Roman candles down Williams Street as a car stopped to bump Ralo’s “Akh Shit Pop Shit,” the unofficial anthem of the day. (Ralo faces charges of running a marijuana smuggling operation from an Atlanta apartment complex.)

A moment later, a shirtless teenager called for smashing, and vandals shattered a line of windows with a trail of gawkers in their wake. Amid a crowd of hundreds of anonymous protesters, the only authority or direction in the nights that followed came in moments like this, with vandals seizing leadership one storefront at a time.

“While the nation is on fire … people like myself know how crucial this time is,” said Marcus Coleman, director of Save Our Selves, a social justice activist organization in Atlanta. Coleman helped organize marches that Friday. The worst damage to the city occurred a few hours after Coleman’s march concluded, as people began to do their own thing. “How do we channel this energy?” he asked. “What does success look like?”

Coleman wants to see reparations. Coleman wants to see “every damned document” amended. But he’d like to start with some basics. Coleman proposes that the city of Atlanta require police officers to live in the communities they police, at least for a time. He’d like police officers to be drug tested immediately after a shooting. He also notes that California just changed their standard for justifying police shootings from a “reasonable” use of force to a “necessary” use of force. The change lowers the barrier to firing and charging a police officer for misconduct. He would like to see it here in Georgia.

The death of Floyd and subsequent protests amplified a political shift that had begun with the international outcry over the killing of Arbery in south Georgia. Every bit of information about Arbery’s death in February and the delayed prosecution seems to turn public disgust up another notch; prosecutors told the court Thursday that the man who appears to fire the fatal shot in the widely circulated video spat racial epithets after killing Arbery.

Outrage has been multiracial and politically broad, which is unusual in Atlanta. “One of the reasons that white people haven’t shown up is because they didn’t know where to show up and when to show up. That’s not the same problem today,” said Janel Green, a primary organizer of the Women’s March in Atlanta.

Atlanta has a mythology as the American mecca for black aspirations. A relatively affordable city for black refugees from New York and Los Angeles, Atlanta rests at the center of the black music universe, with a black business elite, deep cultural cachet, and a black political power structure.

Buckhead is where that falls apart. Buckhead is the epicenter of Atlanta’s stark inequality. Buckhead is Lenox Mall and Phipps Plaza, the last luxury malls left standing amid the death of retail, and the target of lots of looting.

“Buckhead is trifling as shit,” said Don De La Vega, standing in a couture business suit amid black T-shirts. De La Vega said he lives in Buckhead and runs a marketing firm. Among other things, Buckhead is finance and tech companies that don’t hire black people, in a city that’s 50 percent black.

“How do we channel this energy? What does success look like?”

“All of this shit is reactive. We need to become proactive,” De La Vega said. “Bring back Black Wall Street. … If you don’t get your ass out there and vote, and be proactive, become educated and aware, you’re not doing anything effective at all. You’re just yelling shit for no reason, like they’ve been doing for the last 100 years.”

De La Vega, like many of the protesters, demands that the government stand equal in the law to the people they police. It was often the first grievance aired, and the most consistent. “The same way we are held accountable as citizens, I believe the government should be held accountable as a government. Not just the police, because it’s not just the police. The police wouldn’t behave like they were gods if we didn’t treat them like gods.”

This cry for justice speaks to the deep inequality black Atlanta endures, often without acknowledging it. Atlanta is supposed to represent black achievement.

But Atlanta is an unequal city. It is the most unequal city. It has the greatest income inequality as measured in a Bloomberg analysis, two years running. The racial income gap reflects some of that; white households in the city of Atlanta earn more than $80,000 a year on average, while black households earn about $30,000 a year. That gap narrows in the suburbs, but not in Buckhead’s streets. Fewer than 2 percent of black households in Atlanta make more than $100,000 a year. Fewer than 4 percent make more than $75,000 a year. One in three are living, somehow, on $22,000 a year or less. $340 a week take home, maybe.

Atlanta has had the lowest income mobility in America, too. In 2014, being born in the bottom quintile of income (under about $16,000 a year, today) meant the odds of making it into the top quintile in Atlanta (above about $120,000) were 4 percent.

People move here in droves. About 75,000 people move to metro Atlanta every year. The average rent on a two-bedroom apartment has risen by more than $700 in nine years to $1,850. You need three times the rent to qualify. That’s about $66,000 a year. Most black people here don’t make that much. Half the city is black, but 88 percent of people experiencing homelessness here are black.

Atlanta’s black political class has been making noises about inequality for a while. It has taken some tenuous steps to address inequality for very poor people. Bail reform. Pre-arrest diversion programs. A $50 million homelessness program. In the wake of wide protests for both Arbery and Floyd, long-frozen hate crime legislation is working its way through the state’s legislative process, and a team of six Democratic lawmakers have proposed that the state create a registry for bad cops.

But Fulton County Jail is still filled to overflowing, mostly with black people. One in six Atlanta households faced an eviction within the last 18 months, mostly of black people.

When the National Guard return to their day jobs, and the streets reopen, in quiet rooms in City Hall and the state Capitol, these inequalities will be discussed with new urgency.

“There’s a way for Atlanta to be that shining beacon, that black mecca, if it can implement one of these policies in the middle of this crisis,” Coleman said. “OK, we’ve torn this place up for the very first fucking time. Some don’t like it, some don’t mind it, all should understand it. Well, we came to the table with leaders, with community, and we came up with what we felt like solutions.”