Antone Melton-Meaux also defended nondisclosure and confidentiality agreements in the wake of #MeToo. 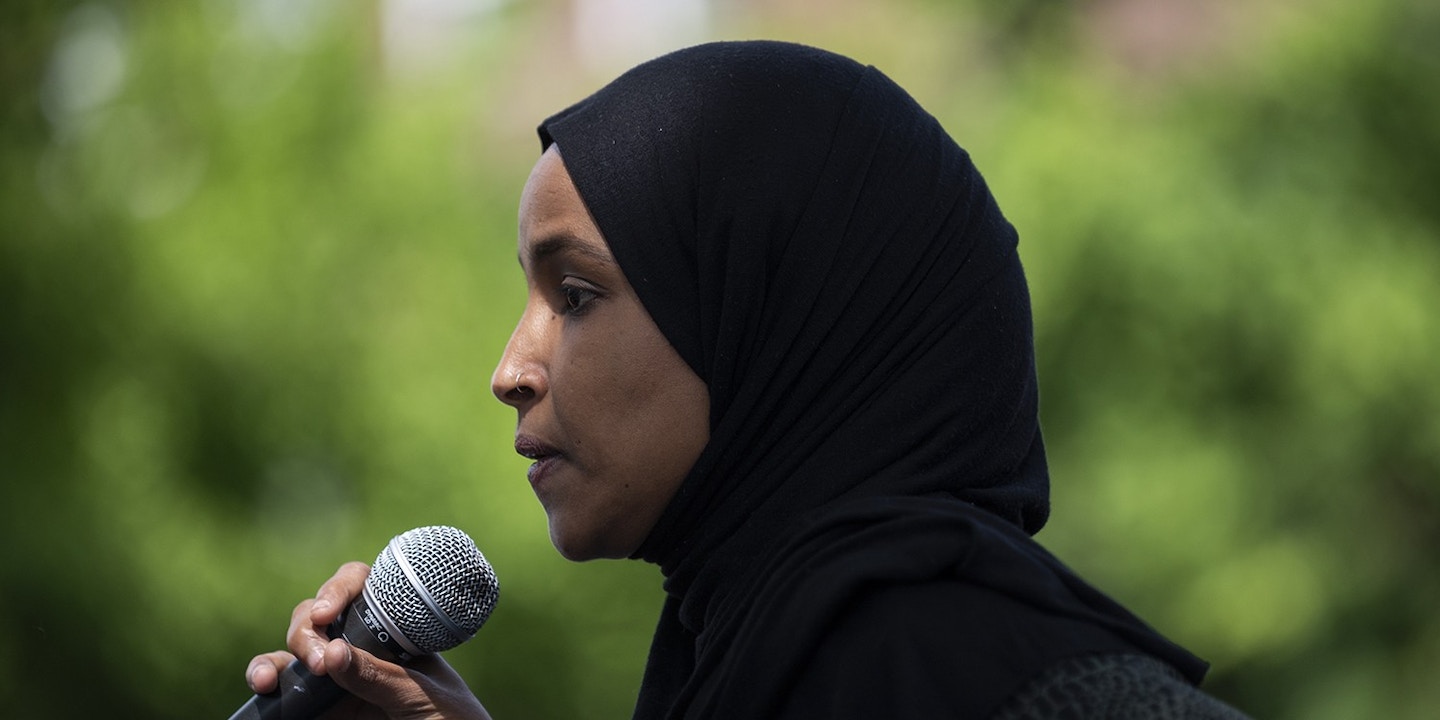 The convulsions in Minneapolis, sparked late last month by the police killing of George Floyd, are the largest protests in the Twin Cities against police violence, but hardly the first. For years, the city has grappled with how and whether to reform its abusive police department — and, alongside protests, the fight is playing out congressionally in the race for Minnesota’s 5th Congressional District.

In the summer of 2015, protests began nationwide following the massacre of black South Carolinian churchgoers by white supremacist Dylann Roof, and the deaths of Freddie Gray in Baltimore and Sandra Bland in police custody in Texas, among others. The unrest spread to Minneapolis, as protesters took to the streets to demand police accountability. In August 2015, when Black Lives Matter protesters briefly blockaded entrances to the Minnesota State Fair, local attorney Antone Melton-Meaux took to the pages of the Minnesota Star Tribune to rebuke the protesters.

“Black Lives Matter movement must be accountable, broaden its vision,” read the headline. The protesters, Melton-Meaux argued in the opinion piece, had gone too far with an anti-police chant, and that the real focus ought to be on broader ills within the black community. For Melton-Meaux, it was a rare entry into the public square, but it landed a big punch.

“The movement must quickly pivot and embrace a bigger tent that is inclusive of the most critical challenges that face the black community,” wrote Melton-Meaux, noting that black student test scores in the city were dismal. “When did Black Lives Matter march on the Minneapolis school board or administration? It didn’t happen.”

“Education is the most critical piece of the fragmented puzzle,” wrote Melton-Meaux. “Key issues in the black community also include joblessness, low wages, crime and the broken family structure.”

Organizers at the time said the chant — “Pigs in a blanket/fry ’em like bacon” — was meant in jest; a Black Lives Matter organizer told the Associated Press at the time that the uproar over the “30 second” chant at a peaceful demonstration was an “attempt to minimize our movement.” But Melton-Meaux expressed concern with what he saw as messages “targeted to incite violence against police officers”: “the movement cannot retain credibility if it defends destructive chants that have no place in our public discourse,” he wrote.

Now, Melton-Meaux has launched a primary challenge to freshman Rep. Ilhan Omar in Minnesota’s 5th District, which encompasses much of Minneapolis — a contest that is shaping up to be something of a proxy fight over the direction of the city. Melton-Meaux stands for the moderate city establishment whose credibility has been shattered by the protests, and Omar represents the faction of the city demanding fundamental change.

In 2015, Melton-Meaux expressed concern with what he saw as messages “targeted to incite violence against police officers.”

The movement Melton-Meaux criticized in 2015, of course, not only retained credibility, but grew enormously over the ensuing years. On Sunday afternoon, following days of protests, a veto-proof majority of Minneapolis City Council members announced commitment to disbanding the city’s police department. They vowed to create a new, community-led system of public safety. The move represented a major victory for the hundreds of thousands of protesters who have flooded streets in the wake of Floyd’s killing, and the local activists who had pushed for radical changes to policing for years.

Omar, who has long been active with Black Lives Matter, has been marching with the protesters and supported “dismantling and disbanding the Minneapolis Police Department” and replacing it with a system that “prioritizes crime prevention and community response.”

Melton-Meaux’s response to the recent protests has been more equivocal. “My family and I have proudly and routinely marched and protested with Black Lives Matter and others who are demanding justice to correct the gross racial inequities we see not only in policing, but education, income, housing, and more,” Melton-Meaux said in a statement. “I stand by the comments I expressed in my 2015 Star Tribune Op-Ed arguing for BLM to advocate nonviolence in their demonstrations or risk weakening the movement they were building.”

Melton-Meaux briefly joined calls this weekend to disband the Minneapolis police department in a tweet that has since been deleted. “The Mpls City Council is leading in transforming our public safety systems to truly serve our communities,” he said. “We need to disband #MPD.”

Melton-Meaux said in a statement the tweet was deleted “because of confusion over the terms being used right now” like “disband” and “defund.” He said that the campaign didn’t want to add to confusion without further context. “That said, I unequivocally support disbanding, or as I define it, dismantling the Minneapolis Police Department as it exists today.”

Melton-Meaux, who owns a mediation practice and serves as a volunteer minister at the Salem English Lutheran Church, has previous Beltway experience. While studying at the University of Virginia School of Law, Melton-Meaux worked for the Congressional Black Caucus under former Democratic National Committee Chair Donna Brazile, who was then chief of staff for Rep. Eleanor Holmes Norton. After graduating law school, he joined the law firm Skadden, Arps, Slate, Meagher & Flom in Washington, D.C.

And Melton-Meaux has taken a more moderate position on other high-profile issues in recent years. In 2018, in the wake of the #MeToo movement, he defended nondisclosure and confidentiality agreements, saying that the movement to abolish these contracts, which effectively protect and enable sexual harassers, “could produce unintended consequences” and hurt employers. In an article published by the Minnesota State Bar Association’s magazine, Melton-Meaux argued that the #MeToo movement is “turning sex harassment settlements into a modern day scarlet letter H for employers.”

In 2018, Melton-Meaux argued that the #MeToo movement is “turning sex harassment settlements into a modern day scarlet letter H for employers.”

These confidentiality clauses, he wrote, “protect the brand and reputation of the organization by preventing negative publicity and the prospect of further exposure in a lengthy public trial.” News reports that organizations like Fox News and 21st Century Fox have entered into multiple settlements with women to resolve sexual harassment claims, he continued, have “fueled the narrative” that these organizations are using confidentiality clauses in settlement agreements “to silence victims and protect perpetrators.”

“Employers will be forced to make decisions with unappealing outcomes,” he wrote. “If employers decide to settle a sex harassment claims, they expose their organization to the likelihood that it will be branded by the public and media as a harasser, the stain of which will be hard to remove.”

As a candidate, Melton-Meaux said on Tuesday, “I propose that we ban non-disclosure agreements in sexual harassment and discrimination cases except when the agreement is requested by the affected employee.”

As one of the highest-profile progressives in the country, and one of the first two Muslim women elected to Congress, Omar has faced backlash from conservatives and establishment Democrats alike. Her comments going after the power of the pro-Israel lobby, specifically, breached a longstanding political taboo. Some Minnesota Democrats reportedly began taking steps to recruit candidates to take on Omar just two months into her first term.

While Omar won the Minnesota Democratic–Farmer–Labor Party, or DFL, endorsement last month, she is being challenged by two other Democrats in the primary on August 11 and a crowded Republican field. Melton-Meaux poses the most serious threat, having picked up a number of endorsements, including local civil rights champion Josie Johnson; Nekima Levy Armstrong, the former president of the Minneapolis NAACP; longtime state Sen. Dick Cohen, and some other local elected officials.

Melton-Meaux is also backed by two of Minnesota’s most prominent DFL donors, Sam and Sylvia Kaplan. The Kaplans, top bundlers for Barack Obama’s 2008 campaign who were rewarded with an ambassadorship, have been credited with helping launch the career of the late Minnesota Sen. Paul Wellstone. In a Star Tribune report last year, Sylvia said it was too early to say whether a primary against Omar was warranted but called the controversies a “distraction for the party” and said she hopes the congresswoman “stops the tweeting.”

Freshman Rep. Dean Phillips has been conspicuously silent amid the challenge to Omar in his neighboring district, despite the party’s public hostility toward primary challenges in general.

Much of Melton-Meaux’s campaign messaging has focused on criticisms of Omar’s first term in Congress, including comments she made about Israel that drew accusations of anti-Semitism and her personal relationships. “Omar has made statements that have been reckless and harmful to the Jewish community,” Melton-Meaux told Jewish Insider in April. Melton-Meaux describes himself as a “lifelong progressive Democrat,” but doesn’t support policies like Medicare for All and strongly opposes the campaign to boycott, divest from, and sanction Israel for its occupation of Palestinian territories.

“This bipartisan consensus has been successful in encouraging and maintaining a strong security alliance with Israel, while promoting a two-state solution to realize Palestinian statehood,” Melton-Meaux said.

His campaign, which has raised more than $400,000, is funded with major contributions from pro-Israel groups like NORPAC and Pro-Israel America PAC. About 75 percent of Melton-Meaux’s donations are large donations over $200. By contrast, less than 1 percent of Omar’s contributions are over $200. The first-term congresswoman has raised $3.4 million for her reelection bid and has nearly $1.3 million cash on hand mostly from small individual donations, according to the most recent filings.

Many of the donors fundraising with NORPAC and Melton-Meaux had previously contributed to Republicans, according to FEC filings, including Sens. Mitch McConnell, John Cornyn, and Martha McSally, and the Donald Trump campaign, in addition to a handful of pro-Israel Democrats.