Concerned that a crowded field of candidates could lead to the nomination of a former Independent Democratic Conference leader, local Dems ran a poll. 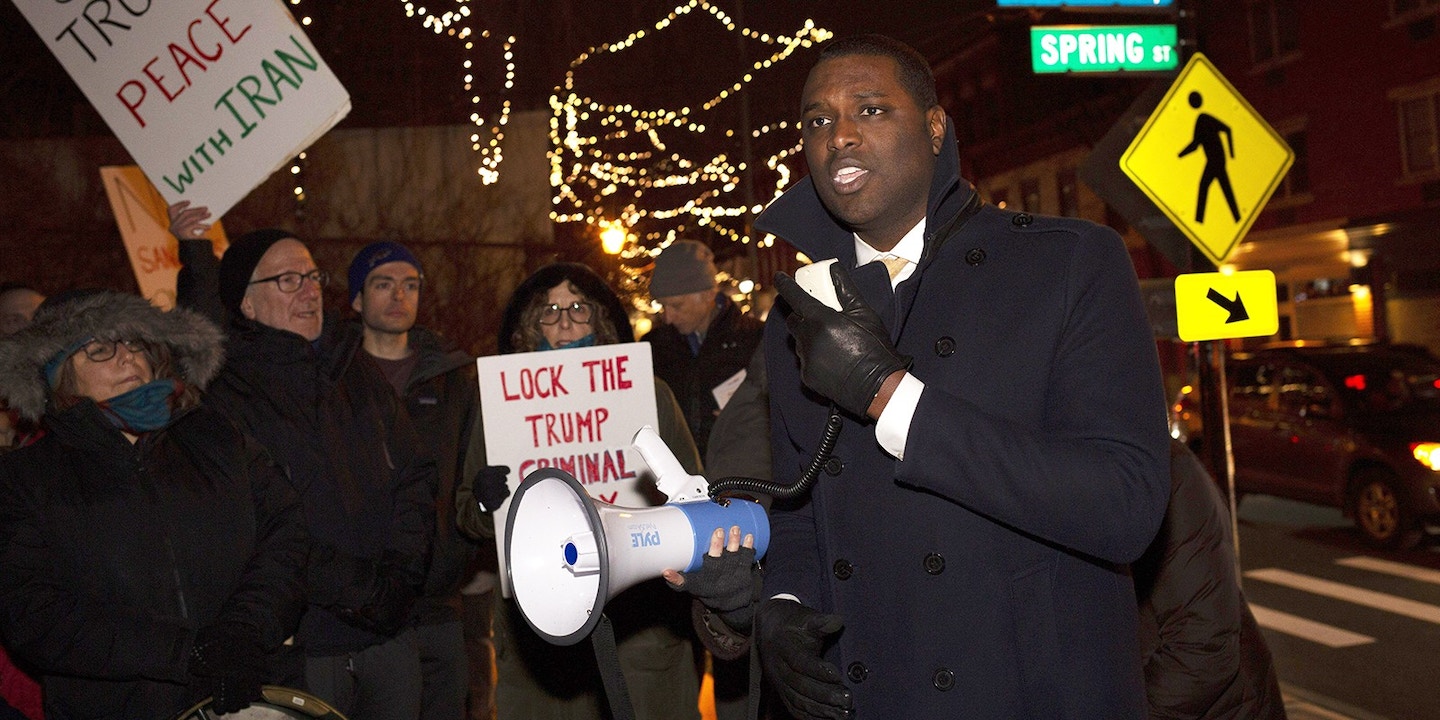 Concerned that a crowded field of candidates could lead to the accidental nomination of a former leader of the Independent Democratic Conference in a New York congressional race, local Democratic officials took the unusual step of commissioning their own survey to assess the contours of the race.

With a half-dozen or more viable challengers, state Sen. David Carlucci — who is well known in the southern New York district, home to wealthy enclaves like Chappaqua, and has a base of support in Rockland County — has been considered the frontrunner. City and State previously reported that several internal polls have shown Carlucci in the lead since the start of the race. Carlucci was a leader of the IDC, a band of breakaway Democratic senators who caucused with Republicans in Albany, before most of them were wiped out in 2018. The notion that Carlucci could get a promotion to Congress was anathema to many local Democrats.

The progressive polling operation Data for Progress released a poll in early June showing four candidates bunched together at the top, all within the margin of error, with Carlucci at the top with 15 points; former Defense Department official Evelyn Farkas and former federal prosecutor Adam Schleifer just behind at 13 percent; and Mondaire Jones, who’d been endorsed by local and national progressive groups, at 12 percent. The poll helped set off alarm bells and the progressive consolidation behind Jones hastened, with Sen. Bernie Sanders joining Rep. Alexandria Ocasio-Cortez in backing Jones, culminating in a recent endorsement by the New York Times editorial page. Jones has racked up endorsements from Congressional Progressive Caucus Chair Pramila Jayapal, the New York Working Families Party, and Democracy for America. Jones’s campaign raised $350,000 since Ocasio-Cortez endorsed him on June 5, including $290,000 since Sanders’s endorsement last week, according to his spokesperson.

The question facing local Democratic voters intent on stopping Carlucci, then, was which of the viable candidates was the smartest to strategically consolidate behind. For that, they wanted their own independent poll. So local Democratic officials and donors pooled resources to commission Public Policy Polling, a progressive polling firm, to survey the race. “With no incumbent in the race and so many candidates, many without any previous electoral track record, we were all hearing a lot of questions from voters, and even asking ourselves within the local party here in Greenburgh, about the direction of the race,” Dan Weinfeld, speaking on behalf of the Greenburgh Dems, told The Intercept. “Obviously, assessing the threat of the IDC candidate’s chances played a big role too. With no local media offering independent polling, we figured that if we didn’t commission a poll from a reputable independent firm, no one would.” The poll was funded by private donors, Weinfeld said, as well as the Greenburgh Town, Irvington, Dobbs Ferry and Tarrytown Democratic Committees.

The survey of 1,141 likely primary voters found Jones up by a surprising 11 points, at 25 percent, with Farkas and Schleifer tied for second at 14 percent, and Carlucci at fourth at 11. The undecided number had fallen to just 24 percent from 38 when DFP had surveyed. Asked for a second choice, 16 percent of voters named Farkas, while 11 percent named Jones. One in 10 voters said they had already sent in a ballot, and only a quarter said they planned the vote on Election Day, with the rest either voting by mail or early voting. Nearly a third of Jones supporters said they had already voted, by far more than his opponents, suggesting that Jones’s supporters are enthusiastic and/or he’s winning over the most plugged-in party activists and voters. The survey was conducted from June 15 to 16. The poll showed a sharp divergence between landline and text respondents, with Jones beating Farkas by 20 points among text-based survey takers, and by 4 points among landline respondents. Farkas polled at just 4 percent among voters under the age of 46, but was the favored candidate among those over 65. Landline respondents made up 56 percent of the poll.

Jones initially entered the race to primary incumbent Rep. Nita Lowey, who later announced her retirement, leading to the crowded field. The district is deep blue and also one of the wealthiest in the country, which poses a question to Democratic voters as to what kind of party they want to be. Jones, who would be the first openly gay black man in Congress, was raised by a single mother who cleaned homes in the district before he went on to Harvard Law School. Jones represents one path that wealthier Democratic districts can go, while the other candidates represent different directions.

Farkas, running to join other women in Congress with roots in the national security establishment, has the backing of controversial donors like John Negroponte and stumbled in the campaign when it emerged that she had fabricated a high-profile claim on MSNBC. Farkas had said that she had encouraged her staffers and others on the Hill to collect evidence related to Russian interference in the 2016 election, but when she testified behind closed doors, she told investigators she knew of no such evidence and had “made a leap.”

Over the course of his career, Carlucci received roughly $125,000 in contributions from law enforcement groups. In a petition circulated earlier this month, the advocacy group MoveOn called on Carlucci to return donations from interest groups that opposed police reforms and to answer to his record of having failed to advocate for criminal justice reform over his decade in office.

Carlucci’s record with the IDC is proving to be a liability in other ways as well. The Westchester Coalition for Legal Abortion is sending mailers and making robocalls urging voters not to support Carlucci, noting that he blocked pro-abortion legislation for years as a member of the IDC.

Carlucci is one of several congressional and state-level candidates who appear to be getting endorsements from the Police Benevolent Association of the City of New York, according to a screenshot of the PBA’s private endorsements tweeted by Queens Eagle Managing Editor David Brand in early June. The list of endorsements, which have not yet been made public, includes Carlucci; Michele Caruso-Cabrera, who is running against Ocasio-Cortez in the 14th District; and Rev. Rubén Díaz Sr. — who is proudly homophobic and opposes abortion rights — in the 15th District. Díaz confirmed the endorsement late last month.

Carlucci’s campaign did not confirm or deny the endorsement by the time of publication. Neither did Caruso-Cabrera’s. The PBA did not respond to requests for comment.

With $1.1 million, Jones has outraised all of his opponents except Farkas, who has received significant funding from the defense industry and brought in $1.3 million, according to her campaign. Carlucci has raised $366,431 so far. Buchwald, who is worth between $2.9 and $4.2 million, according to disclosures, has raised $981,510, including $550,000 of his own money. Schleifer, the son of a pharmaceutical billionaire who founded Regeneron, is self-funding his campaign, having so far poured in nearly $4 million. He has said he opposes a wealth tax, and he has between $26 million and $55 million in pharma holdings, including at least $25 million from Regeneron.

Farkas has backing from prominent Republicans and defense industry donors, including Negroponte, who was George W. Bush’s director of national intelligence, as well as the U.S. ambassador to Iraq and the United Nations, where he helped make the case for the invasion of Iraq. Farkas is the only candidate to outraise Jones this quarter.

She is also the top Democratic recipient this cycle of contributions from a Republican political action committee, Gen Equity Federal PAC. The group also gave $2,800 in August to California Democratic Rep. Jimmy Panetta’s campaign. Farkas and Panetta are the only two Democratic House candidates the PAC has contributed to since 2014. Its top GOP recipients this cycle include Republican Sens. Cory Gardner of Colorado and Martha McSally of Arizona, and Republican congressional candidate Michelle Steel, who’s running against California Democratic Rep. Harley Rouda in the 48th District. One of Gen Equity’s only other recent Democratic contributions was in 2016 to the Democratic Fearless PAC, which is affiliated with Colorado Gov. Jared Polis, for $1,000.

EMILY’s List, the establishment-aligned group that supports pro-abortion women for office, endorsed Farkas in early May and made an independent expenditure against Schleifer this month.

Schleifer is now targeting Farkas in return. “Evelyn Farkas might be running as a Democrat, but she is bought and paid for by special interests in Washington, most notably a Republican PAC called Gen Equity that supports Donald Trump’s congressional allies,” said Chris Scribner, Schleifer’s spokesperson. “Farkas should immediately return the money to her GOP backers and denounce Gen Equity’s efforts to obstruct progressive policies in Congress.” Asked for comment, Farkas’s campaign manager suggested that The Intercept’s resources ought to be dedicated to investigating Carlucci, Schleifer, or Jones, rather than focusing on Farkas.