Carolyn Maloney, a New York Democrat, has been among the most vocal supporters of aggressive police tactics. She’s facing a serious primary challenge. 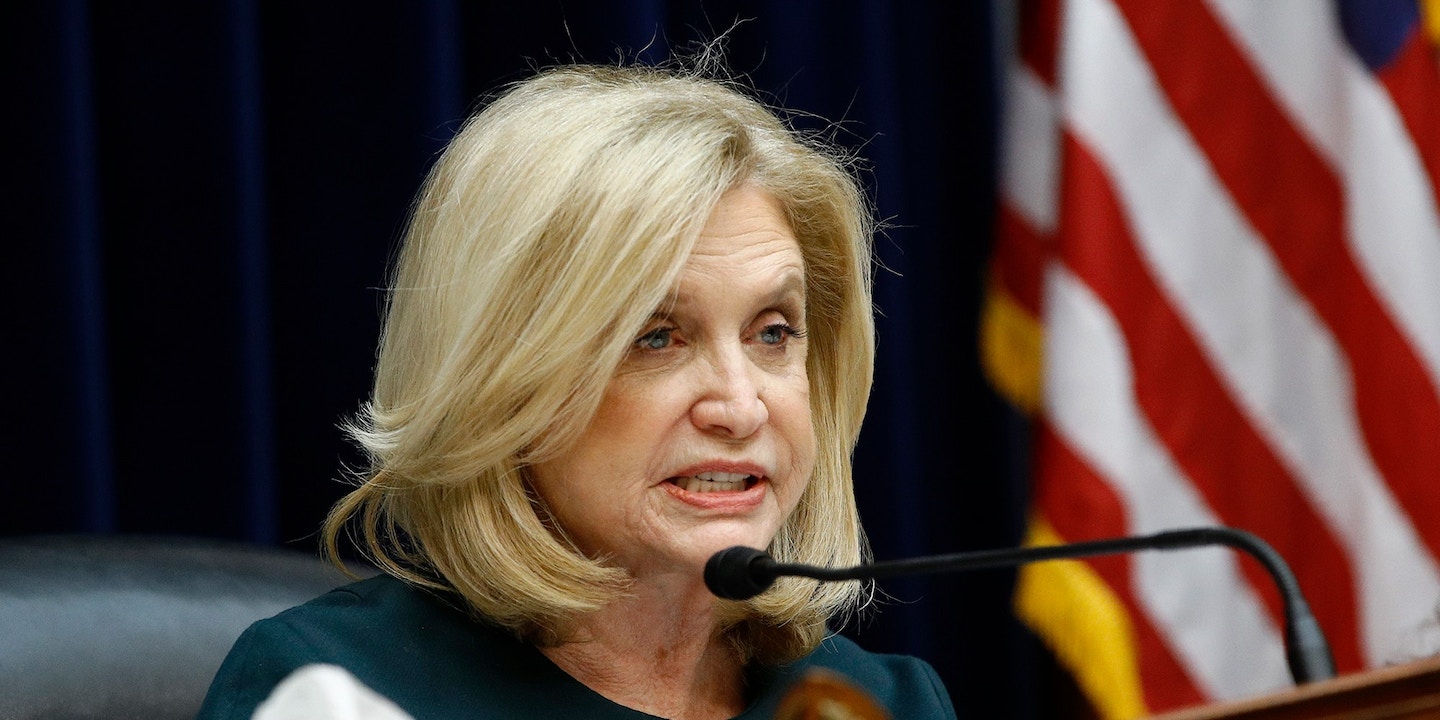 For Carolyn Maloney’s entire career, the longtime representative from Manhattan has been among the most vocal supporters of aggressive police tactics, a prominent champion of the tough-on-crime legislation that is now being challenged in the streets of New York. Now that record has become a major liability in the veteran representative’s bid for office.

Her opponents in the June 23 primary, Suraj Patel, Lauren Ashcraft, and Pete Harrison, took aim at her record on policing and mass incarceration at a recent debate, as the protests around the country have upended primaries from New York to Kentucky and Texas. Patel ramped the attack up a notch on Saturday, telling the New York Times that Maloney is a “vicious, vindictive person who uses racist tropes to attack a brown man running against her because it makes her uncomfortable,” and that she “weaponized my race against me” with a digital ad calling Patel “creepy.” Patel, in a statement, worked to connect the ad attacking him to the broader protests against systemic racism. “Unfortunately being called ‘creepy’ has happened to Black and Brown men in America — and frankly the world — for too long. It’s an amorphous word that intentionally lacks an accusatory action,” he argued. Maloney, who didn’t respond to requests for comment, told the Times the ad merely used Patel’s own words, and his campaign’s prior practice of using Tinder to reach voters, in casting its judgment.

Patel nearly bested Maloney in 2018. The race revolving around the issue of racism is not firm political ground for Maloney, who famously torched her shot at a Senate seat when she publicly dropped the N-word in 2010. Her record, though, is her bigger liability among a Democratic electorate that now rejects ’80s and ’90s-style criminal justice policies.

Maloney was first elected to the New York City Council in 1982, the first midterm after Ronald Reagan’s election. She spent a decade in that position, where she became friends with Ray Kelly, who was then rising through the ranks of the police force. Kelly, as former New York City Mayor Mike Bloomberg’s police commissioner, was a controversial and outspoken advocate of practices such as stop-and-frisk. Even as the broken windows theory of policing he championed fell out of favor nationally, Maloney stuck by him, recommending him to President Barack Obama as an ideal secretary of the Department of Homeland Security. In 2017, she suggested that President Donald Trump would make an “excellent appointment” if he were to name Kelly head of the FBI. “He has been apolitical, I would say. I think he’s extremely competent and he would be a fine choice,” Maloney said.

Rep. Hakeem Jeffries, her fellow member of the New York delegation, suggested the idea was not such a good one. The FBI director, Jeffries noted, “has to be completely and fully vetted by the United States Senate as an individual with the highest degree of integrity, and independent with not a political bone in his or her body. It’s not clear to me Ray Kelly falls into that category.”

Maloney and Kelly are aligned on policing. In her decade on the council, she boasted that she established Manhattan’s first-ever Tactical Narcotics Team, claiming it led to 2,000 drug arrests. Elected to Congress in 1992, she was an outspoken supporter of Joe Biden’s 1994 Crime Bill, which has plagued his current presidential campaign. “It’s the best news for New York City to come out of Washington since before Ronald Reagan took office,” she said at a press conference announcing its passage. At that press conference, Maloney and other members of the New York delegation appeared at City Hall with former Mayor Rudy Giuliani “brandishing assault weapons and a mock check as trophies of the war, predict[ing] increased funds for rape counselors, drug prosecutors, afterschool programs and police technology,” Newsday reported at the time.

She continued voting for similarly tough legislation throughout the decade. In 1997, Maloney voted to strengthen criminal penalties for juveniles who commit violent crimes. In 2000, she voted to give $100 million in block grants to states that imposed five-year mandatory minimums for violent crimes involving guns. Before voting for it, she criticized the bill on the floor, saying it was a “a limited half-measure” put forth by Republicans “that will only help six states.”

Four years later, she drew protests outside her office for backing an effort to place CIA agents inside police departments. Also in 2004, Kelly cost the city millions in lawsuits for his brutal treatment of protesters at the Republican National Convention.

Ashcraft said that it’s only been the pressure of protests and primaries that has pushed Maloney to add her name to some reform efforts. “My opponent voted for the Crime Bill and also voted against the H.Amdt.918 to H.R.4870 to stop the flow of military equipment to local police and has largely ignored legislation to demilitarize the police until she’s been pressured to co-sponsor 11 bills this month alone,” Ashcraft said.

“She may have found Black Lives Matter two weeks ago but that’s about 28 years too late,” Patel said. “As a lawyer, I can say that Rep. Maloney’s record on criminal justice and police brutality is disqualifying.”

Patel, who lost to Maloney by 8,644 votes in 2018, is a hotel executive, New York University professor, and Obama campaign alum. He is running on Medicare for All and a Green New Deal, as well as decriminalizing poverty and ending the war on drugs. He’s raised $544,130 so far. Ashcraft, running to Patel’s left, has worked in affordable housing and assistance for low-income families, and is also a standup comedian. She’s a democratic socialist with a focus on disability rights and supporting underbanked communities and has raised $142,972 so far. Harrison, a democratic socialist housing activist, has raised $45,056.